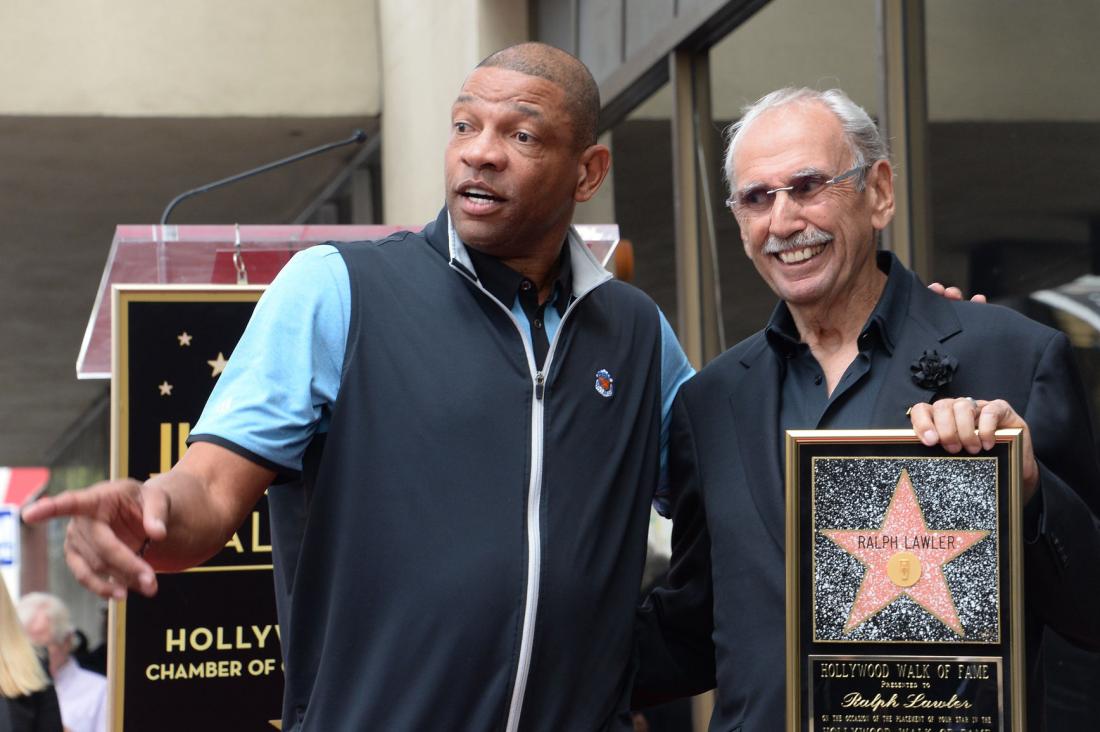 Ralph Lawler gets his Hollywood star. Coach Doc Rivers alongside

So you’re playing that game called “Mt. Rushmore” — commission four stone-carved faces up on the side of a mountain that represent the most important people for your (fill in the blank: team, profession, presidents of your neighborhood watch committee). Who would they be?

If the baseline was Los Angeles sports play-by-play men since the beginning of time – and L.A. really ain’t that old – the obvious first three in lineup are Vin Scully, Chick Hearn and Bob Miller.

All are in their respective sports’ Hall of Fame broadcast wing. They have stars on the Hollywood Walk of Fame. They introduced their sports to an L.A. market that hadn’t seen it before, and then fell in love with it.

Now, who completes this foursome?

Without Dick Enberg, it seems imperfect.

Without Tom Kelly, it seems inadequate.

L.A. writes its own script. So if Cary Grant and Eva Marie Saint can avoid the bad guys in “North By Northwest” by clinging with their fingertips off the side of George Washington’s head in a soundstage that replicates the massive sculpture carved into the Black Hills of South Dakota, we think there is a need to take the whole side of the Santa Monica Mountains if we are to chisel out a façade of fame for Southern California’s most monumental voices.

It’s not just six in one, half dozen in the other. It’s a framework for professional excellence, and what we will judge future broadcasters by as we try to figure out how this 21st Century Fox world works.

The Southern California Sports Broadcasters organization has a Hall of Fame, remembering that it started in the late 1950s under the guidance of Tom Harmon, the former Heisman Trophy winner who moved west from Michigan to play for the Rams then became a well-known TV sportscaster. He was the Hall’s first inductee when it decided it needed to launch such a thing in 1992.

Scully, Hearn, Miller, Enberg, Kelly and Lawler were naturally included along the way. Scully now has a lifetime achievement award. He and Miller are the first recipients.

When we attempted in 2013 to put together our 10 most influential sports broadcasters in L.A. history, we realized that we could have included the likes of Keith Jackson or Al Michaels – L.A.-based men who, like Enberg, started locally but became much bigger national names.

But in no particular order, we felt this Top 10 needed to include the likes of:

If we are to keep our eye on the ball after the announcement Wednesday that this will be Lawler’s last season as the voice of the Clippers, we ought not to overlook his longevity amidst the plight of a franchise that could be the highest profile and least successful.

As he told the Los Angeles Times’ Bill Plaschke:

“This is my 40th year with the Clippers, my 60th year in broadcasting, my 80th year on earth … and it just seems inescapable.”

Lawler will turn 81 just as the 2018-19 season is coming to a close – and predictions are not well again for the depleted Clippers.

One of Lawler’s Law has been that the first team in a basketball game to score 100 points would win it, based on his experience. It probably held true 99.9 percent of the time, but even some of the best Clippers teams would unnecessarily prove his law to have that human fallacy factor as the final two minutes ticked off another come-from-ahead defeat.

Lawler brought a veteran trained broadcaster mentality to the game. He knew we could be seeing something different every night, even if the results didn’t always pan out.

He rightly doesn’t want to be the first L.A. broadcaster to reach 100 years old and still call games. Scully, who turns 91 this winter, may become as close as we ever get. Miller, who turns 80 next month, has already walked away from the rink, for health precautions.

Hearn, who died in 2002 at age 85, would have hit the 100-year mark in 2016 and we suspect he would have given it a bold attempt if not for a series of health issues at the end. Enberg’s passing last December at age 82, and Kelly’s passing at 88 in 2016, were mourned as well with tributes from those who followed local L.A. sports and still hear those calls in their memory.

What never will help Lawler in the GOAT LA discussion is that he may always have been associated with Clipper futility, which made his job more demanding and far more difficult to maintain the disposition he always seemed to have.

The Clippers were never really welcomed to L.A. but came anyway in 1984 as a cash-grab for then owner Donald T. Sterling. He tried out broadcasters like Chuck Healy, Van Miller, Ted Leitner, Al Albert, Phil Stone and Dave Diles – the last three as part of the L.A. Clippers – before finding Lawler in 1987.

Through it all, the audience understood how he kept up a brave and noble outlook, trying to entertain and inform, and adhere to his phrases that sometimes felt more as a crutch than a catch. If Enberg was punctual with his use of “Oh, my!” Lawler had to be just as prudent when pulling out “Oh me, oh my!” to get his point across that something fantastic just happened. And he did so while looking like your local pharmacist who you’ve trusted all these years later to still make sure the prescription was accurately filled.

Having just let go of Bruce Bowen as Lawler’s latest color man, the coolest thing the Clippers can do for him as he reaches this walk-off season is pair him up with those who’ve been his partners over the last four decades. Lawler reminded us once that his first partner was Stu Lantz, who has since worked with four Lakers play-by-play men since 1987 when he joined the team as Hearn’s longest-tenured sidekick.

Others who could come back include former Clippers Bill Walton, Marques Johnson and Michael Smith. There was also Norm Nixon and Junior Bridgeman. Former coaches Mike Fratello, Kevin Loughery and Bob Weiss worked with him. So did Keith Erickson, another former Hearn partner, who did some moonlighting with the other team.

Add to that, Lawler was also a radio play-by-play over most of those seasons — often doing games that weren’t televised, but some seasons stepping aside from radio as Jerry Gross, Eddie Doucette, Pete Arbogast, John Ireland, Mel Proctor and Matt Pinto came in.

The most logical replacement for the Lawler chair after this season, starting in 2019-20, would be current radio voice Brian Sieman, part of the team’s broadcast family since 2007. It would be a notable change in tone for the team – Sieman works alone, and does it very well, with a style that’s quite different from anyone calling games in L.A. these days.

Everything is different from the way it used to be.

But that’s why we remember. That we had Scully, Hearn and Miller.

And we’ve had Enberg and Kelly. When Lawler leaves, they all will be committed to our personal video and audio archives. Lawler’s announcement draws that line of demarcation.

The Clippers, by the way, have no retired jerseys up on the wall at Staples Center. Probably for a reason.

When Lawler steps off the curb and into retirement, you can be sure he’ll be the first to have some sort of banner in his honor up there among the dozens of Lakers’ reminders that they’ve been the basketball king in town. The team already did the prerequisite Hollywood Walk of Fame honor a couple of years ago.

There’ll be a campaign to see if he can get recognized by the Basketball Hall of Fame for the Curt Gowdy Award for broadcasting. Why not?

Whatever is decided, we’ll be the first to put in the request for more mountain-side space, maybe next to the Hollywood sign, so we can carve it up for L.A. sportscaster lore. It wouldn’t be against the law of nature to want to include Lawler.

Tom Hoffarth was a columnist with the Los Angeles Daily News and Southern California News Group since graduating from USC in 1983, specializing in the sports media. He has won two Associated Press Sports Editors awards and an L.A. Press Club Award for his piece on Vin Scully’s final broadcast in 2016. He wrote a book with former USC broadcaster Tom Kelly called “Tales from the USC Trojans” in 2007. You can follow him on Twitter @tomhoffarth, and on his website at https://fartheroffthewall.com/blog/ . His vodcast called “The Drill” with Steve Lowery is on YouTube.com as well as https://www.facebook.com/TheDrillSports.

I’m a longtime Tom Hoffarth fan, and I’m glad to see him here on this site in addition to his blog. I haven’t heard much of Ralph Lawler, and maybe that’s part of the problem with his lack of recognition from the Hall of Fame. Dave Niehaus had the great line about the terrific Angels broadcast crew of Dick Enberg, Don Drysdale, and himself in the 1970s: “Three of us against Vin, and we lived to tell the tale.” Lawler was with the #2 team in LA, and the #1 team had maybe the greatest basketball announcer ever in Chick… Read more »

Love the Niehaus line about Vin

Niehaus is another guy who didn’t get too much attention back east, apparently, though he said he had some offers to leave Seattle. But in Seattle, he was a god.