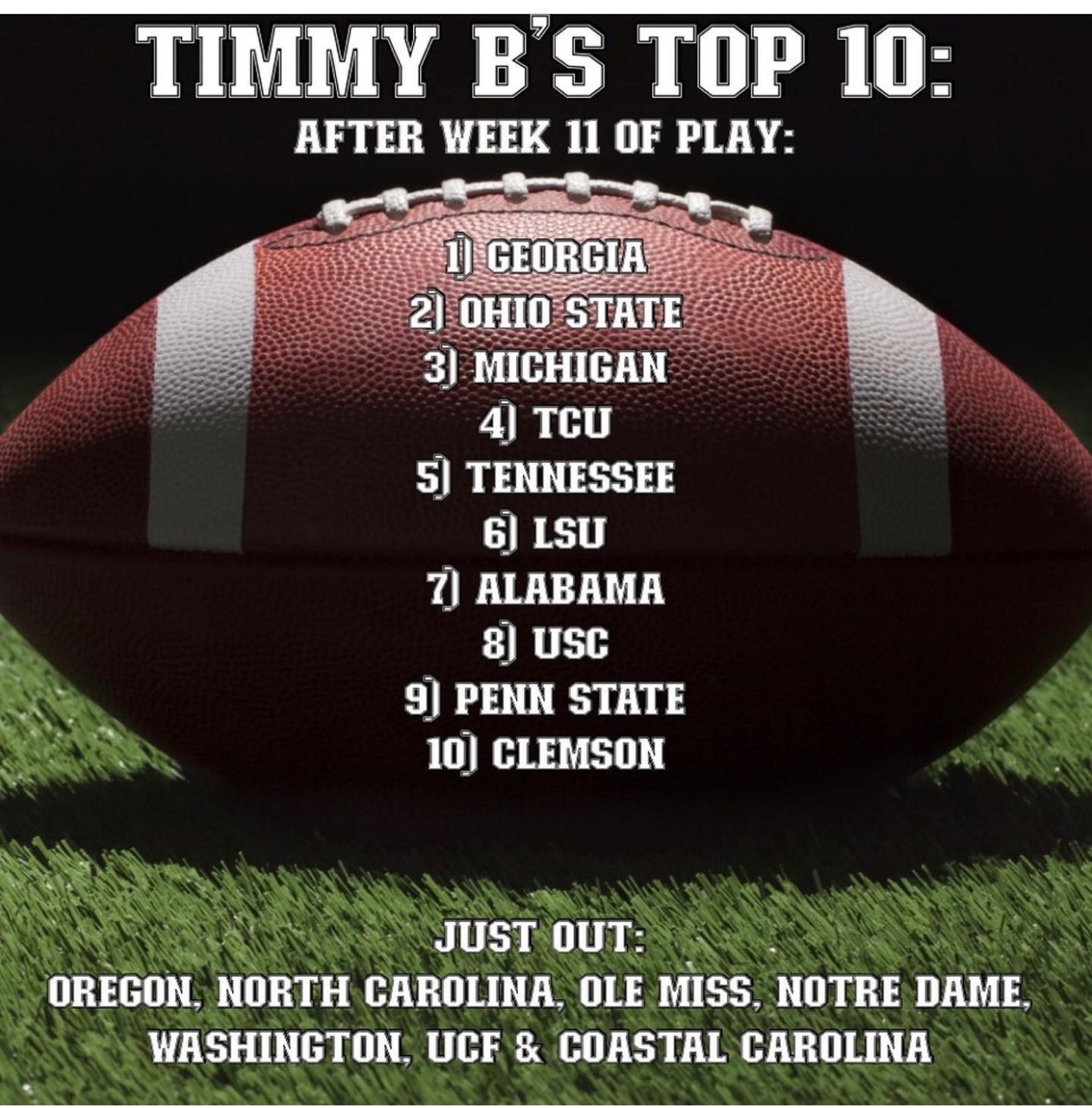 1) Georgia It’ll cruise to the SEC Title without being severely challenged. Suddenly the Kentucky game doesn’t appear to be challenging. This years Bama could lose and still be in the CFBPlayoff

2) Ohio St. should dominate Maryland and then all eyes will shift to next week’s deciding match-up with the Wolverines.

3) Michigan No hiccups allowed with a poor non-conference schedule, not one that it will have to win a week from Saturday if they’re to get into the top four.

4) TCU The mainstream media won’t stop throwing grenades at The Horned Frogs. This week’s example is Mr. ESPN, Stephen A. Smith. Condescending snide remarks over whom they’ve beaten. Check their SOS (strength of schedule), Stephen A. may be in between Kyrie and LeBron conversations, ya might learn a little CFB.

5) Tennessee now suddenly has the Vanderbilt game over Thanksgiving  for a little more interesting after their ‘Defeat of Kentucky.’

6) LSU needs help, yes. But they’re in effect playing with house money, as are just about all other SEC teams are playing with non-conference cupcakes this week.

7) Alabama The reality is that the Tide still has a sliver of a path. Why? They’re still PPP; Pure, Playoff and  Privileged

8) USC The Trojans are small chance ends in primetime when UCLA concludes the PAC12 season for good beating the Trojans.

9) Penn State The Nittany Lions will make a New Year’s 6 Bowl game and are on their way to challenging both Michigan and Ohio St. in 2023.

All eyes 👀 are on #4 TCU again as the elitists that govern the CFB Playoff on behalf of the Power 5 look down their noses at the Horned Frogs. A quick reminder to those drive-by media types who don’t know, Cincinnati was a Group of 5 team, TCU is not! The BIG12 is as vested in this Playoff as the SEC and the BIG 10. The notion that their schedule is suspect as a result, is both out of line, and fundamentally wrong!

There’s history however, and it goes back to the first year of this flawed system in 2014. The, TCU was #3 going into the final weekend. However they didn’t have a BIG12 Title game and therefore didn’t have the so called 13th game that the BIG 10 and SEC had, but the did schedule a regular season conference game and beat Iowa St. 55-3. It didn’t matter once Urban Meyers’ Ohio St. Buckeyes blasted Wisconsin 49-0. In the final rankings TCU dropped 3 spots from 3 to 6th. The Buckeyes made the field in the 4th position.

It’s not beyond comprehension to think it could happen again. One big difference this time. TCU is (for now anyway) undefeated. The team in 14’ had one loss to BIG 12 Co-Champions Baylor.