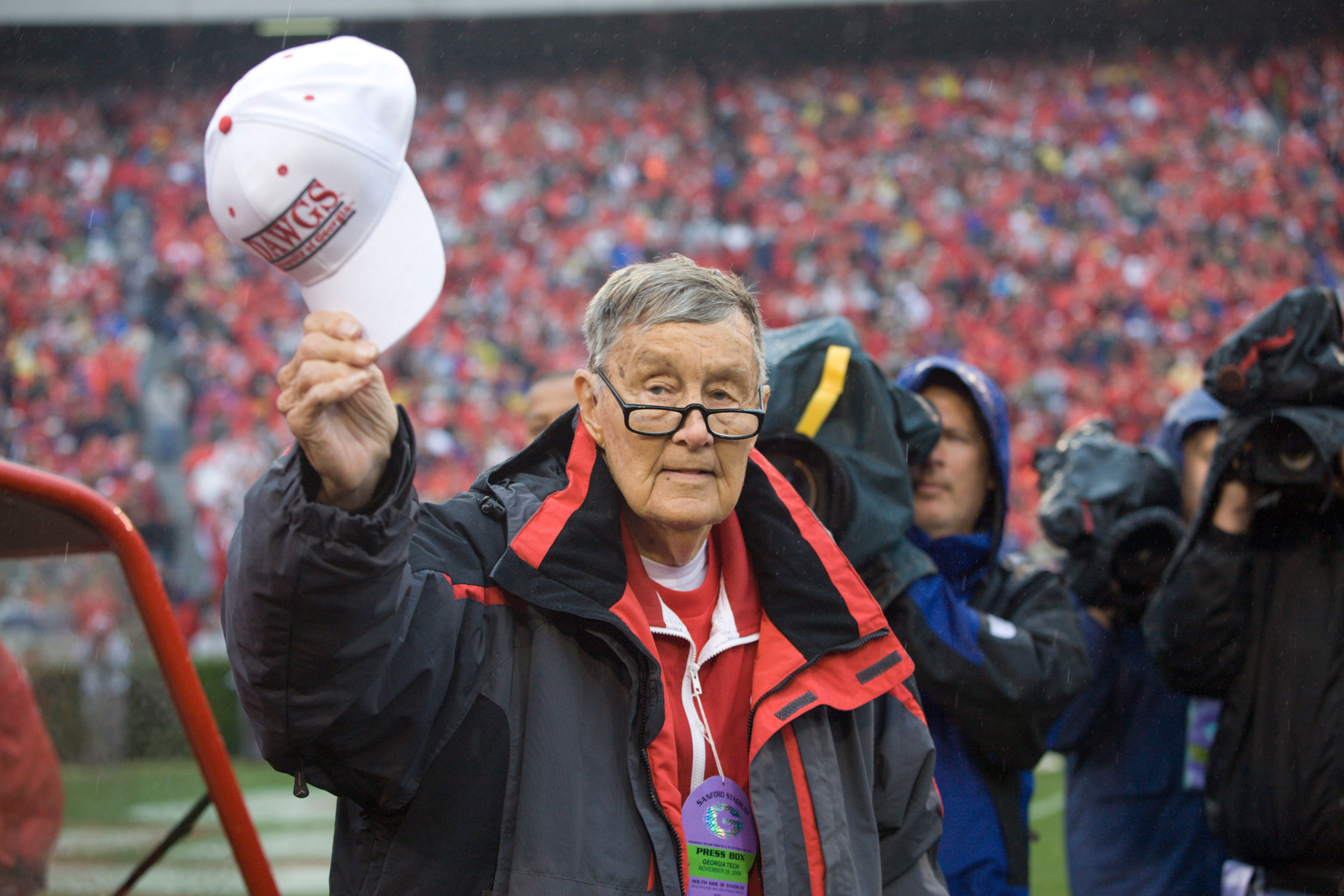 He called Vanderbilt and the Falcons, yet Larry Munson will always be identified with the Georgia Bulldogs.

As we approach the end of college football’s 150th regular season, let’s salute the unforgettable team of eleven voices who will remind many of crisp Saturdays. For scores of years, these legendary team broadcasters touched their constituencies indelibly.

Radio was born in 1921. College football and prize fighting helped facilitate the enormous growth of the medium through its golden decades. Ted Husing, Bill Stern and others grew the game nationally when television was still a wild dream. Husing influenced football officials to develop and improve hand signals so that announcers in booths upstairs can interpret penalties. Ted was also the first to format the basic depth chart, a version of which is used by every football announcer today.

It would be impossible to rank these voices one to eleven. It would be splitting hairs. So in alphabetical order, here’s the field of those who produced soundtracks that connected thousands of dots for generations.

There were other wonderful local voices who called football but are better known for basketball. Hoops at their schools were just more successful and popular than football. Examples might include Cawood Ledofrd at Kentucky, Woody Durham at North Carolina, Max Falkenstein at Kansas and Don Fischer at Indiana. Others like a Joe Starkey at Cal has been at it for some 45 years but the school doesn’t have the zany football support that other programs have. Cal in the Bay Area competes with pro and college teams.

Here are my best eleven. Yes, eleven like on the field:

The sense of urgency to his voice was chilling. He spent 46 years calling Nebraska football, 1939-84, when televised games were quite limited if not non-existent. When Bremser retired, athletic director and former football coach Bob Devaney was concerned that Lyle’s enthusiasm would never be replaced by his successors. He might have been right. Bremser was one of a kind in many ways. In addition to calling Huskers football, he also managed the 50,000 watt powerhouse that carried the games, KFAB.

Painting a picture on radio might be a disappearing act. But never in the booths where this wordsmith took his wares.  Christensen wasn’t a larger than life guy. He was a humble Upper Midwesterner, not a character and not an open rooter. He was just steady, committed and a an absolute fixture in the Twin Cities . He was a grammarian who would often describe a failed field goal attempt as ‘not good.’  Minnesota governor Mark Dayton said Christensen “made the best wins sound sensational and the worst losses almost bearable.” Ray did 520 consecutive Minnesota football broadcasts.

The dean of play-by-play announcers in the Sunshine State, Deckerhoff’s voice is interchangeable with Seminoles football. He’s called the program’s games through thick and thin. It’s his 41st season behind the Florida State mic. Win or lose, Gene can galvanize the unstimulated and lift them from their doldrums. There’s never a hint of despair in Deckerhoff’s delivery. His calls are descriptive, riveting and emotional. His energy is contagious.

A Brooklyn boy making it in the deep south? Where’s the drawl, they might ask. Then again, Mel Allen came from Alabama and made it as big as you can in New York City. Gold’s voice and diction are tops, right out of broadcast school. Eli has called Tides football for over thirty years and has done so with an unmistakable melodious rhythm. He’s unquestionably the most popular announcer in the state. Appropriately, Gold is a member of the Alabama Sports Hall of Fame.

Twenty two years in the booth is a long time but no anywhere near a record. Yet this is Ohio State, a perennial power and national title contender. The Buckeyes Nation extends far beyond the Ohio borders. Keels’ voice is rich and smooth, his descriptions are accurate and never overdone. It’s a textbook call, one that’s never contrived. He’s always cognizant of the fact that he’s on radio. He gives the score repeatedly. Paul knows what information fans want and he’s delivered it consistently since 1998.

Known for Georgia football, his gravelly voice was intertwined with his beloved Dawgs. It echoed around the Peach State each Saturday, before television was prevalent and even thereafter. For crazy Georgia fans, Saturdays were incomplete without Munson. He wore his emotions on his sleeve, from the mid-60s through 2008. “The fans are roaring. The stadium is rocking.” When things were going well “Look at the sugar falling out of the sky!”

Long time Voice of Notre Dame when the Irish were on the old Mutual Network and when most of the games weren’t on live television. Commanding in the booth, his voice boomed even in his last season, one truncated by an untimely death from cancer. He was just 58. Patrick passed in his boots so to speak, while preparing for his next Irish broadcast. Patrick also spent many years calling Detroit Lions games.

Football, Texas style. Kern Tips was the Voice of the old Southwest Conference from the 40s until he passed in 1967. In those years, the Southwest Conference owned the radio rights to each participating school and Tips called the biggest matchup each week. Verne Lundquist: “I grew up listening to Tips. One of the great thrills I had was standing by his side on a broadcast and keeping his stats. Kern’s phrases were legendary. He was very descriptive, used good adjectives and was loved throughout Texas.” For instance, a fumble at the handoff was a “malfunction at the junction.”

Meechigan! He exclaimed it with all his heart. From 1945 through 1980, Ufer called games on an Ann Arbor radio station and later powerhouse WJR in Detroit. He poured all his soul into his broadcasts and fans would hang by his every word. Ufer was a star runner on Michigan’s track and field teams. He was inducted into the University of Michigan Hall of Fame the same year as ex-football and U.S. president, Gerald Ford. Ufer fought cancer and died in mid-season season 1981, nine days after his last broadcast.

Ward was an institution through Tennessee, particularly in the better days of the football program. From the mid 1960s through 1999, Ward was one of the most popular sport personalities in Tennessee. “Give…him…six, ! Touchdown, Tennessee” was Ward’s patented cry on a Vols’ score. Tennessee fans mimicked him everywhere. Ward also owned a successful ad agency. Late in life, he donated $2 million to the university. The John Ward broadcast Center is named in his honor.

At the time of Zabel’s death at 91 in 2013, Mike Hlas wrote in The Gazette, “Zabel’s voice and personality thundered across Iowa and the Midwest in an era when radio ruled.”  Zabel did Iowa football for 49 seasons on WHO Radio, a 50,000 watter in Des Moines whose most famous alum was a gentleman named Ronald Reagan. Hlas called Zabel “black and gold to the bone.” A homer without a doubt and an icon to reared Iowans everywhere.

Personally glad to see John Ward on the list. There are so many things worth mentioning about him. Tennesseans even walked around quoting his commercials — “Gas, Natural Gas.” Kenny Chesney wrote a song about him called “Touchdown Tennessee” which ended with the line “So Thank You John.” Despite a law degree from UT, he never practiced law a day and always told students to do something that you will love. He called his role as a Tennessee broadcaster his hobby and had a very successful advertising agency. He had a very dry and acerbic wit about him that will… Read more »

Not following local coverage of college football, I didn’t know a lot about many of them. Reading about John Ward, I thought of Lindsey Nelson, who said he was going to call it “The Volunteer Network” and General Neyland said, no, it will be the Vol Network, and I bet it still is. In LA, Tom Kelly did USC games for decades, but was out for a few years and his time was pretty well split between radio and TV. Fred Hessler did UCLA football and basketball for 24 years, but never stood out in the way that Bob Kelley… Read more »

Ted Husing trained Marty Glickman to use the football depth chart that Husing created. Marty, in turn, passed that knowledge along to others, like myself, who were learning how to broadcast a football game on radio. And so it continues to this day…