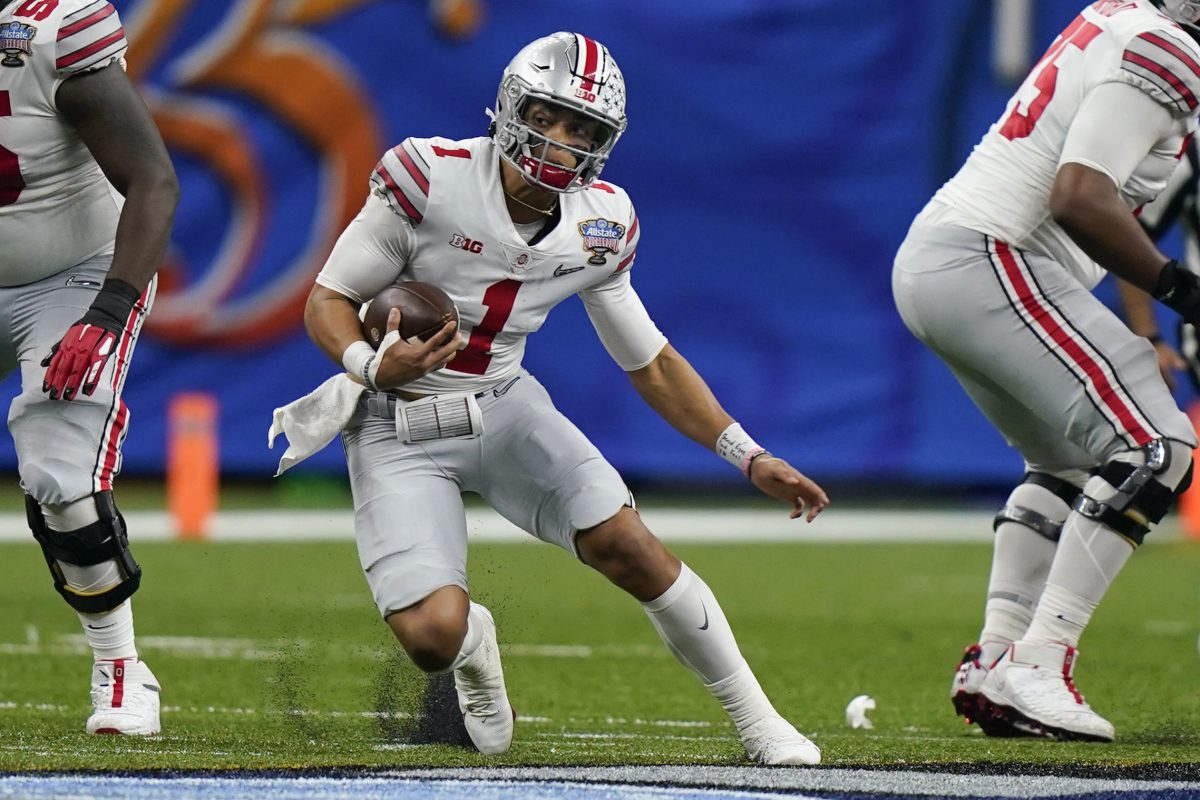 Justin Fields and Ohio State take on Alabama in the college football championship game in Miami Monday night. ESPN has multiple ways you can watch and/or listen,

The College Football Playoff National Championship is scheduled for Monday night and ESPN is at it again. No. 1 Alabama will be challenged by No. 3 Ohio State at 8 p.m. ET.

For a seventh straight year, the sports network will offer viewers and listeners an unending menu of listening and viewing options. It’s television the way it should be in 2021!

NBC, Fox and CBS should do something similar for the Super Bowl but don’t. It’s why I’m rooting for Disney to partake in the Super Bowl TV rotation when striking its next NFL rights deal.

The college MegaCast, as its aptly named, gives viewers 14 separate options of watching and listening to the game. It will be played in Miami under what is forecast to be a cloudy night and temperatures sround 70 degrees. Internationally you wonder? The telecast will be available in more than 160 countries.

Chris Fowler and Kirk Herbstreit have the mainstream call on the flagship, ESPN. Maria Taylor and Allison Williams patrol the sidelines. Bill Lemonnier will be the rules analyst. He’s a former Big Ten ref.

Here are your options:

1) The MegaCast begins with the mainstream ESPN production with new technological toys. The producer and director will have access to among many other goodies, dedicated cameras at all times on the two coaches, Alabama’s Nick Saban and Ohio State’s Ryan Day. More than 100 microphones will be placed throughout the stadium to capture the sounds of the game and atmosphere of the limited crowd, enhancing the game telecast.

2) ESPN2 will utilize Laura Rutledge, Marcus Spears, Dan Orlovsky and Mina Kimes who will provide analysis. Joining the quartet is ESPN college football analyst and NFL Draft expert Todd McShay, who will provide draft projections and analysis throughout the game.

4) SkyCast will be on ESPNU this year, with Jason Fitz and Mike Golic Jr. providing commentary and context out of commercial breaks, before throwing it back to the sounds of the game. The popular view from above the action and behind the offense on most plays will also have replays shown regularly throughout the presentation.

8) Command Center on ESPN App Multi-angle presentation, which includes up to four different vantage points at any one time, with statistics and real-time drive charts supplementing the game action.

11) All-22 (ESPN App)
Watch the game the same way players and coaches study film, with a vantage point high above the field of play. The angle allows for the 22 players on the field to be seen at all times, providing the ability to distinguish how plays develop.

12) ESPN Radio Network: Sean McDonough and Greg McElroy call it and will be available nationwide in most markets on terrestrial radio. SiriusXM will also have the ESPN feed.

For any fan of sports coverage on television and radio, it should be a fun night, no matter who’s winning and the score!