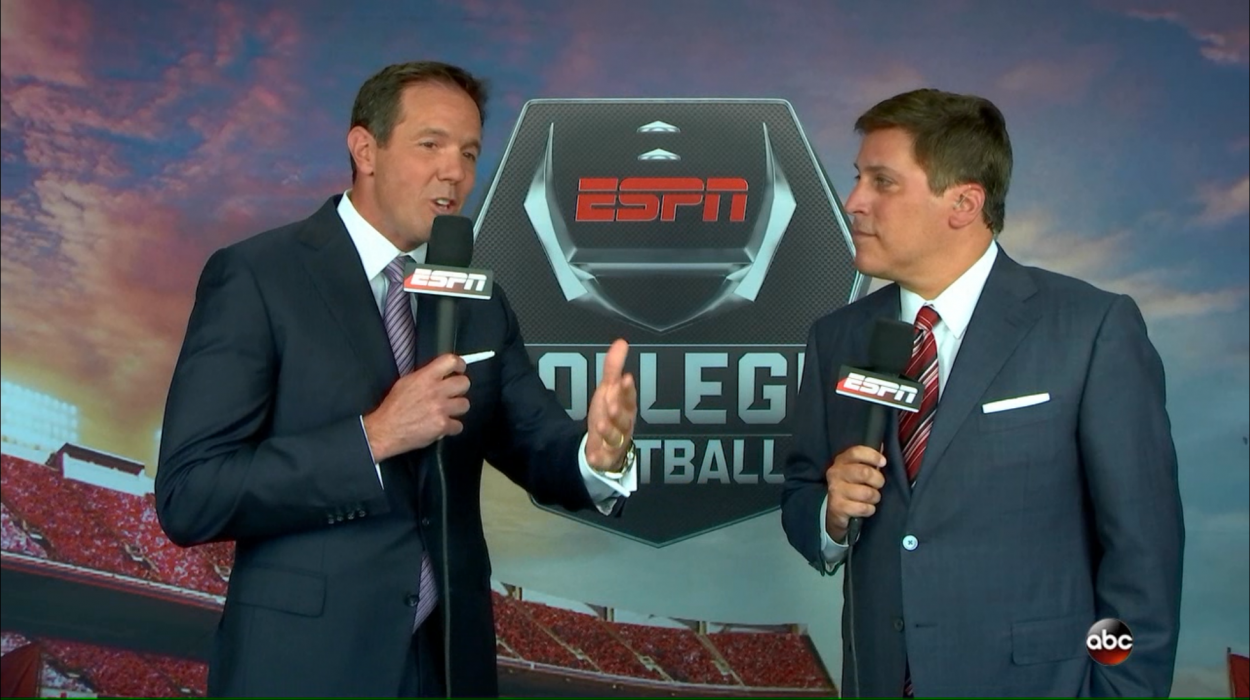 Early in its infancy, ESPN hired John Walsh, a guy from Scranton, PA, to make SportsCenter a happening.  This was before the internet and even before you could call SportsPhone and get the fastest scores on the planet. Walsh, who had worked at Rolling Stone and ran Inside Sports magazine, was the right man for the job.

With anchors like Chris Berman, SportsCenter became an event. And in 1993, Walsh added a reluctant guy from New York named Steve Levy. He was reluctant because he preferred working in New York rather than Bristol, Connecticut. That changed quickly.

Levy recently celebrated 25 years at ESPN hosting the one show the network is identified with. He always made it interesting and even exciting. If there was one word to describe Levy’s style it’s “flare.” Nothing is mundane to him.  He turned NHL scores into an event by creating “Levy’s Lounge” where he chats with analyst Barry Melrose over highlights. To the viewer it feels like two guys chatting while having a beer.

And to the surprise of many long-time viewers,  Levy, one of the early WFAN anchors, added college football play-by-play to his resume. He was an accomplished NHL announcer when ESPN had the rights to the league. To no one’s astonishment Steve excels at football. In fact, he has excelled so much, that I would rate the team of Steve Levy and Brian Griese to be ESPN’s best.

Here’s why: Levy makes the game exciting when it deserves to be and doesn’t when it doesn’t. Griese, like his father who was a long-time college football analyst, is solid and dependable. Neither one pulls any punches or tries to sweep mistakes under the rug. If there’s a bad call or a blown review or a lack of a review when one is sorely needed, Levy and Griese will lay it out.

It may have taken Levy 25 years to get there, but we’re surely glad he’s in the football booth.

Monday Night Football: The Salesman, the Rookie and the Flying Nun

A few weeks ago I wrote about how much most viewers prefer a nice, easy-going two-man football booth. This year ESPN’s MNF booth is a mess. To be technically correct, there are just two in the booth—play-by-play salesman Joe Tessitore and rookie analyst Jason Witten. It always fees like Tessitore is trying to sell me something. Kind of reminds me of Brent Musburger, and not in a good way.

But getting back to the point, ESPN has a third guy, Booger McFarland, chatting away after each play as if he were right alongside the other two. But as you probably know by now, McFarland comes off like the Flying Nun on a contraption that slides him along the sideline to see the action close up. An unconfirmed rumor is that ESPN did this because Witten’s agent insisted on a clause that there could only be two in the booth. However I’d be surprised if ESPN would undermine its new hire like that by adding a third guy in a backhanded way.  Regardless, it just so happens that many of the things McFarland offers up are interesting nuggets, but they come at the expense of developing Witten who has become interesting in his own right.

At first, Witten didn’t seem like he could cut it, but he was trying to figure it out. Now he’s ready to rush in at the first opening to get his own point across. Unfortunately that’s often when the viewer is already exhausted from listening to the three of them nonstop. Witten now seems like he can be very decent. But if he’s got to fight for airtime with the other two he’ll never develop. ESPN should give Witten a chance on his own. McFarland should also be given a chance on his own, but not in this crazy package.

Let’s hear it for that great sportsman, Clemson coach Dabo Swinney. Ahead 56-3 late in the second half against Louisville, Swinney’s team completed a 59-yard pass to make it 63-3. Easy to understand why they needed to pass: Dabo needed an insurance TD. Then, later in the fourth quarter Dabo sent his own son, Will, into the game to catch a touchdown pass to make it 77 points for the home team.

That night Dabo and Mrs. Dabo posted a congratulatory video for Will on Instagram. “We’re proud of you, son,” they cheered. Well Dabo, you obviously come from the school of sportsmanship whose motto is: “Kick ‘em when they’re down.” So we’re proud of you too, Dabo.