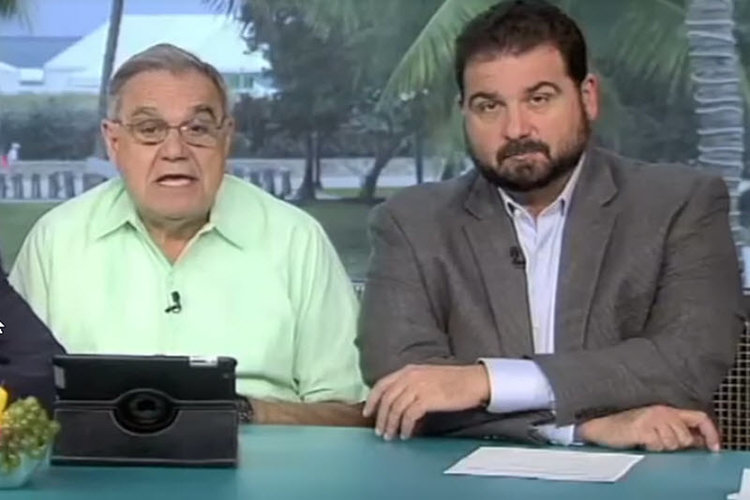 At the start of their careers, what Bob Costas was to broadcasting, Dan Le Batard was to print; a prodigy!

Former Herald sports editor Paul Anger brought Le Batard in as a college intern.  He recognized almost immediately that the youngster was a writing phenom and hired him in 1990 as a reporter right out of the University of Miami. Shortly thereafter, he made him one of the country’s youngest sports columnists. Dan was only in his mid-twenties at the time.

In the decades preceding the start of Le Batard’s career, Ed Pope was the face of the Miami Hearld’s sports section; a Red Smith Awardee, the market’s lead columnist and a household name among the area’s sports fans. Times though were changing. Pope was getting older and the number of sports teams in the marketplace started swelling. Miami had become a legit sports town.

Three pro teams hit the market in rapid succession; the Heat, Panthers and Marlins. Before you knew it, there were personalities and championships. Pat Riley and Jim Leyland produced NBA and World Series titles and the Panthers were in the Stanley Cup finals.

The town was abuzz and Le Batard rode the wave of growth and excitement. Over the next ten years or so, he became the man with the mighty pen.

Soon after Le Batard was firmly entrenched, Jorge Rojas became the Herald’s sports editor and the two men began an almost 20 year working relationship. “Pope and La Batard could both turn a phrase. Pope made you think and Dan can make you cry,” Rojas said this past weekend.

Rojas, who left the paper last November, had nothing but praise for Le Batard who by now has migrated almost exclusively to radio and television and is an ESPN star. Jorge says proudly, “Dan has moved on to fame and fortune!”

While relationships between editors and columnists can occasionally be contentious, Rojas paid Dan nothing but praise. “It tells you something about a man’s dedication. Readers might not be aware of the detailed work that goes into the editing process. Dan was loved by the copy desk. He was always gracious and available. Dan appreciated everyone’s role, big or small. He’s known for his columns but underrated for his reporting skills. He has his finger on the pulse and is a master at interviewing athletes.”

Le Batard strengthened his presence in South Florida as the market’s pre-eminent voice when he started hosting a local sports talk show. Before long, his talent caught the attention of the ESPN bosses in Bristol.

Columnists take positions. As a writer, Le Batard often took minority stances, for example presenting the mercurial ex-Dolphins’ back, Ricky Williams in a more positive light. Last fall on his radio show, he tackled listener racism by calling out doubters of Michael Bennett’s claim of discrimination during a Las Vegas arrest.

Le Batard had read a graphic and gripping tweet by Bennett, painting what he claimed was merciless treatment by cops. When Dan was done reading the tweet, he immediately went to a commercial break.

At that point, his message board lit up like the proverbial Christmas tree. Listeners ridiculed and berated Le Batard for emotionally delivering Bennett’s claim. Back from the break, Dan’s eyes welled up with disappointment. He was visibly unhappy and angry that his listening community would be so biased.

“Dan was the golden boy. He was the Dan Marino of the Herald’s sports department,” Rojas says. “He has the mark of a talented writer, able to go against the grain and present a minority view. He’s often called an athlete apologist, the kind that meets the resistance of the old guard.”

Le Batard will occasionally stray from sports on his show and also weave in his beloved, Cuban accented dad, ‘Papi.’

Even now, as a national star of sorts, Miami remains Le Batard’s hub. His show originates from the Clevelander Hotel on South Beach and each week hours of the program air only in South Florida.

Rojas says, “I can tell you that as Dan grew into greater prominence, he was always respectful and sensitive about Ed Pope’s feelings. When we discussed subject matter of his upcoming columns, Dan would often say, ‘I don’t want to step on Ed Pope’s toes.’”

Dan took time to do a Q&A with me, covering his career, growth and differences between print, radio and TV.

You were a successful writer and columnist for the Miami Herald. At what point did you think of broadcasting?

I never dreamed of anything but being a writer. Broadcasting from that space didn’t occur to me back then and wasn’t much of a possibility. Only sportswriters on TV were on the Sports Reporters. So that seemed like the mountaintop, but it didn’t seem like a career. Then ESPN realized sportswriters were cheap, told good stories and had the perspective of a decade or decades of reported opinions. Sports pages mattered more then, and ESPN trafficked on the credibility of that journalism, so careers became available. I never really thought of it as a career till it became one. I was always a writer first who happened to write enough on a large enough platform to have other options while I wrote. I didn’t make it a career that wasn’t spliced away from writing until newspapers started to fade.

Do you miss writing columns and having a powerful newspaper platform?

I miss the fulfillment of having written. It’s harder than anything I did, and lonelier, but more rewarding. I traded it for community, something more fun and less lonely.  Radio and TV stuff is over as soon as I’m done. It’s fun and has a lot of shared laughter but it doesn’t have the suffering or the nobility and echoing endurance of writing for me. As you know, the columnist as a power and activist is largely endangered if not extinct. And there’s a lot NOT to miss. The deadlines. The pain. The pressure. The OCD sculpting.

Have you ever written things you regret and if so which column comes to mind first?

Many. That happens as a young columnist, as you learn in front of people and find a voice. I wrote a lot of dumb and strident stuff in my 20s as I learned the job of columnist on the job. I was too young to be doing it. The first one that comes to mind was one of those hack devices of writing dueling columns before a series mocking New York as a New York columnist mocked Miami. I compared Patrick Ewing to a woolly mammoth in what was supposed to be a fun column. Dumb and young.

Writing and broadcasting have different sorts of pressures. What are they?

The pressure of writing for me was the deadlines, which I always handled fairly well, and the obsessive-compulsive sculpting. Trying to find the words to make it musical. The lack of enjoyment in it. Spending an hour on a paragraph. That happened to me more with longer form writing, or when I was taking the care to write about people and wanting to be fair, but I never figured out a way to just let it fly. The process could be constipated. Broadcasting’s only pressure for me is being a sentence away from the outcry that ends your career because you make a public mistake. But at this point in my life, I don’t actively fear being fired so it isn’t front of brain. No reason to do this job with fear. No way to do it well that way, either.

Of the athletes and sports figures with whom you interacted, who were the most challenging to interview?

I’m inherently curious. The ones for me weren’t the jerks. It was the ones who weren’t revelatory or vulnerable or stimulated or introspective. The cliched or the guarded. The hidden. Trying to find them interesting when they were playing defense against interesting. Barry Bonds was always mean to me at first. Always. But he was also totally transparent once we got going. And he was as interesting as anyone I ever interviewed.

Do you prefer the free-style, open ended talk show you currently co-host on radio (with Stugotz) or would you like to do more television?

I don’t really love TV. Too rigid. It’s fine. But I’ve never loved it. I love radio. The free space to roam. It’s more human. Has more mistakes. I work for a TV company, and TV shows make money, but I have vastly more snorting-laughter fun on radio.

Who were the sports writers that you read and admired growing up?

Tells us about Papi. What kind of dad was he and is he?

Loyal. Always helpful. Always. The younger years were tougher because he was a scared exile and had to provide and was too busy working to have a lot of time for me. But once my mother explained to him that she wasn’t going to be able to teach me how to be a man, that’s when my father started coaching my teams and we became closer. It was good for both of us. He was hard on me — I missed a baseball All Star team once by one vote (his) – but pleasing a difficult-to-please man was always fuel for me. And these days? He would hide a body for me. This is an odd place to tell this story, but he actually HAS hidden a body for me. I shouldn’t say anymore.

Albeit your style is unique, were there other radio hosts or personalities you listened to growing up that influenced your style?

Nah. Sports radio has always been dumb. I wanted to do something different, jump over a very low bar. I did think Phil Hendrie was a genius, though.

Are readers ruder to you than listeners?

In the internet age, it’s the same. Everyone has access now. So it all becomes the same. We are more popular now in radio than we have ever been, so people like us. That’s new to me. Someone usually had to be righteously pissed off, or moved, to sit down and write or type a letter back when I was coming up. Now people can rip you with less effort and thought than a fart.