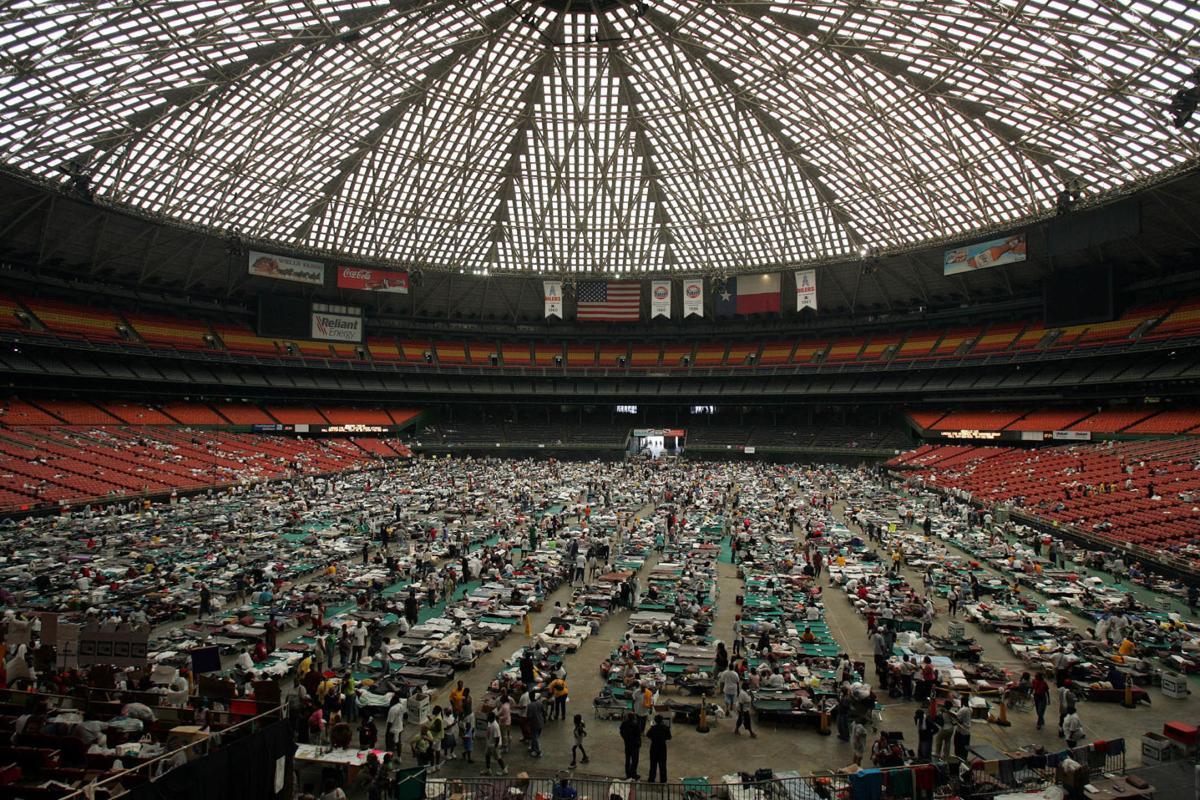 Katrina in 2005 had New Orleans underwater. It forced the Saints to play all their home games out of town one season and the NBA's Hornets to move to Oklahoma for two years

Sports have taken hits through the years. Whether it’s been gambling, cheating, drugs or work stoppages, many root causes have been from within. You might say, ‘I’ve met the enemy, it is I.”

Not this time. An invisible enemy is rattling the globe. Arenas have turned deathly silent and teams of spirited athletes have been immobilized.

Let’s stack up the exogenous forces of the past, those that have played havoc with sports. They were not nearly as unsettling as this scourge.

None of the wars of the 20th century jolted sports to the core. The coronavirus has, in one hideous eye-blinking swoop. It’s stopped shows cold, closed down arenas, turned large airports into ghost towns and made theaters feel like haunted houses.

September, 1918  Due to World War I (called the Great War then), the MLB season was shortened by 25 to 31 games., The World Series started early, Sept. 5. The Red Sox beat the Cubs in six games. Boston wouldn’t win another championship until 2004.

December 7, 1941 – While NFL games are being played on the continent, Pearl Harbor is attacked. Shortly thereafter, players and broadcasters are called into military duty. Some colleges cancelled their football seasons during the war. The 1940 and ’44 Olympics also fell victim to what was first, The War in Europe and later a World War. As for baseball, President Franklin D. Roosevelt urged the game to play on. He said it was a necessary diversion, particularly for women whose husbands were on one of the two fronts.

January 1, 1942 – Less than a month after the attack at Pearl Harbor, there was concern that the Japanese might bomb America’s west coast. As such, the Rose Bowl was moved to Durham, North Carolina. (Bill Stern did the game on the NBC Radio Network. Ken Carpenter checked in, reporting from an eerily empty Rose Bowl in Pasadena.) 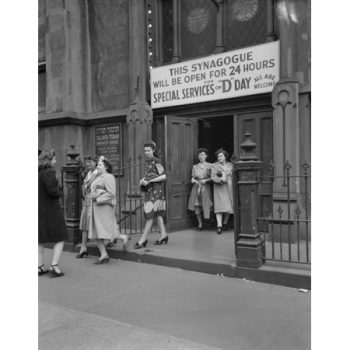 June 6, 1944 – On D-Day, when the Allies invaded Europe. houses of worship were left open all day to encourage prayers for our troops. Baseball games were cancelled. (Dodgers’ voice Red Barber was likely the most popular broadcaster of the day. The Phillies-Dodgers game in Brooklyn that June 6th was cancelled.)

November 22, 1963 – President John F. Kennedy was assassinated on a Friday. The American Football League cancelled its games scheduled for the following Sunday. The NFL played its schedule but the league’s television network didn’t run the games. (CBS Television)

November 9, 1965 – The Great Northeast Blackout. It was a Tuesday and the region went dark. The Knicks-St. Louis Hawks game at Madison Square Garden was cancelled. New York’s first call-in sports talk show with Bill Mazer on WNBC was knocked off the air. (There was no television coverage. The Hawks were scheduled on radio with announcer Jerry Gross. The Knicks’ coverage on radio station WOR was limited to only Saturday nights.)

April 4, 1968 – Assassination of Civil Rights leader Rev. Martin Luther King. President Lyndon Johnson declared April 7th a day of national mourning. The NBA and NHL rescheduled playoff games. MLB dillydallied. It was opening day and the commissioner’s office left decisions up to the teams. It led to mutiny by many black players who said they would refuse to suit up. Eventually, baseball cancelled the games.

June 2, 1968 – Immediately after the assassination of New York’s senator Robert F. Kennedy, only baseball was active. The NBA and Stanley Cup had been completed. As was the case months earlier after the death of Reverend King, William Eckert, MLB’s commissioner refused to act on behalf of the game as a whole. Teams were independently permitted to determine what they wanted. They bickered and only a handful cancelled. The Mets-Giants game was one not played. (Mets announcers were Bob Murphy, Lindsey Nelson and Ralph Kiner. The Giants had the popular duo of Russ Hodges and Lon Simmons.)

November 17, 1968 – The made-for-kids movie Heidi was scheduled for 7pm ET while NBC was still running the Jets-Raiders AFL game. But the network broke away to the movie, doing so to a vocal outcry. the episode was a blessing in disguise. It proved that fans want their Sunday football. (NBC, Curt Gowdy and Al DeRogatis)

September 5, 1972 – Munich Massacre, 11 Israeli athletes and coaches were killed during the Olympic Games by Palestinian terrorists. The games and the competition continued after a suspension of a day and a half. (Jim McKay anchored the coverage on ABC Television. He famously said of the kidnapped athletes, “They’re all gone.”)

July 13, 1977 -New York suffered another widespread electrical blackout. The lights dimmed during the sixth inning of a Cubs-Mets game at Shea Stadium. Mets third baseman Lenny Randle found it frightening, “I thought it was my last day on earth.” (Mets announcers were still Murphy, Nelson and Kiner. The Cubs radio announcers were Vince Lloyd and Lou Boudreau.)

July, 1980 – Summer Olympic Games in Moscow – America did not participate because the Soviet Union had invaded Afghanistan. NBC had won the rights but after the American boycott was announced, the network scaled back its coverage considerably. Furthermore, a significant number of NBC affiliates refused to clear the limited programming that was fed down the line. (NBC’s Bryant Gumbel anchored and provided highlights of some of the Olympic coverage.)

March 30, 1981 – President Ronald Reagan was shot hours before the NCAA Basketball national title game. There was debate whether the game would be played. It was, once doctors felt that the president would survive. (NBC had the rights and the announcers were the outstanding trio of Dick Enberg, Billy Packer and Al McGuire. Bryant Gumbel was the host.)

March 10, 1989 – The North Atlantic Conference didn’t allow fans to attend the post-season conference tournament in the cavernous Hartford Civic Center due to a widespread measles outbreak. Measles caused 41 deaths in 1989. The finals were on ESPN. Bill Raftery did color in a silent arena. Our columnist Dan Mason was a Northeastern University student then and did the game on the student radio station. He said that if he talked loudly, a coach or player would glare at him. (ESPN)

October 17, 1989 – Game #3 of the World Series between the Oakland A’s and San Francisco Giants was set to begin at Candlestick Park. Minutes before the opening pitch and just as Al Michaels and Tim McCarver were in their stand-up open, a 6.9 magnitude earthquake rocked the Bay Area. The quake caused death and devastation. The World Series resumed ten days later. Michaels’ reportorial skills outside the stadium that night were highly praised. (ABC)

April-May, 1992– The Los Angeles riots in the aftermath of the police’s beating of Rodney King caused the Lakers to move a playoff game to Las Vegas and the Dodgers to postpone an entire three game series against the Montreal Expos. It’s interesting to note that 27 years earlier, Los Angeles suffered through a summer riot. On September 9, 1965, the Dodgers’ Sandy Koufax pitched a perfect game. It was just weeks after the August riots ended. Smoldering buildings still had a stench that could be felt at Dodger Stadium just as Koufax completed the feat. (Dodgers, Vin Scully and Jerry Doggett; Lakers, Chick Hearn)

June 17, 1994 – It seemed like the whole world watched a disgraced O.J. Simpson steal the country one last time. NBC was running the NBA Finals between the Knicks and the Rockets while the Los Angeles police were chasing O.J. on the Southern California freeways. The Simpson coverage and game ran concurrently on an uneven split screen. (NBC, Marv Albert and Bob Costas)

September 11, 2001 – The deadly attack on the World Trade Center and the Pentagon caused the most extensive list of cancellations until the current coronavirus. All sports were effected. Baseball was out until September 16th. The Mets moved a home series to Pittsburgh. The World Series didn’t start until October 27th. The NFL pushed back its schedule a week including the Super Bowl.

August 29, 2005 Katrina begins routing New Orleans. By the time that the hurricane passed, the city was 80% underwater. The football and basketball facilities were terribly damaged. The Saints had to play their entire 2005 schedule on the road and returned to the Superdome in 2006. The then New Orleans Hornets moved to Oklahoma City for a couple seasons before returning. They’re now the New Orleans  Pelicans. (Jim Henderson, ex-Saints longtime voice lived out of a suitcase.)

December 13, 2010 – Collapse of the Metrodome roof in Minneapolis forced Giants-Vikings game to Detroit (Broadcast by Fox)

March 11-13, 2020 The coronavirus disrupts sports more than any other unconnected event ever has before. It’s forced the cancellation of virtually every sport imaginable, starting with the NCAA Tournament. The celebration of March Madness has been expunged from our calendars. For now baseball, the NHL, the NBA, MLS, the Masters and more have been postponed or suspended.

Thanks also for the shout-out. I have to mention, Chuck Howard went to Duke and got into his original job at ABC because he was so crazy about sports, and Chet Forte had been a star point guard at Columbia University, so they had a good pair. And I’ve read that, at least in later years at ABC, the two of them despised each other, since they both competed for Roone Arledge’s favor, but that after Forte left and had his gambling issues, Howard reached out to help him, and Forte was very appreciative.

About the 1967 AFTRA strike: a week before the Celtics-Sixers game, Jack Biondolillo rolled the first televised 300 game in the history of bowling. Chris Schenkel and Billy Welu could not call it, so ABC producer Ned Steckel and bowler Bob Strampe did. Schenkel actually missed the first three 300 games for other commitments; Keith Jackson and Bud Palmer called the others.

I always thought that was so ironic that Schenkel was so closely associated with bowling and missed the first several that ABC televised. But it’s also worth noting and remembering that while he was the main PBA announcer, he had plenty of fill-ins because, especially in the early years, he did so many other events for ABC.