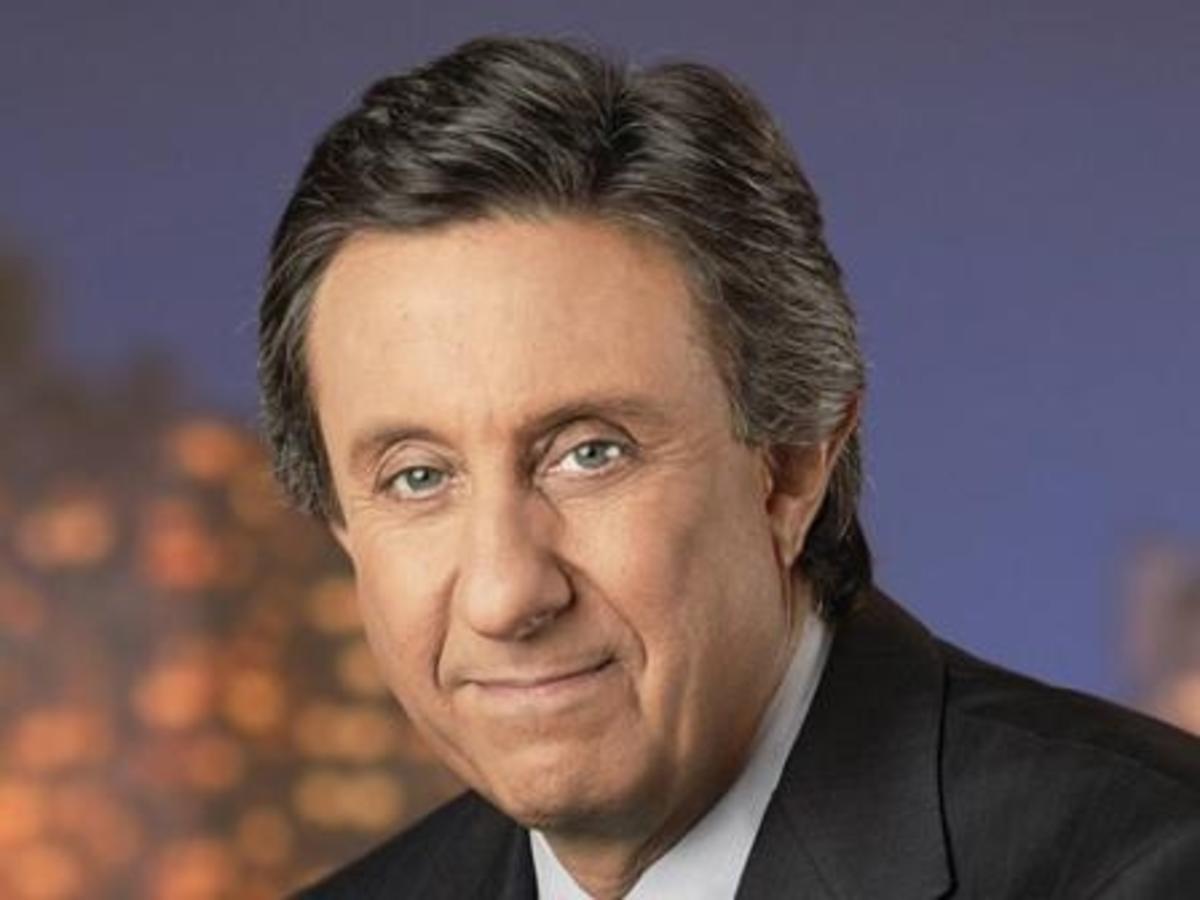 New York is so well known for its great play-by-play announcers.

Mel Allen, Red Barber Marty Glickman Marv Albert. The list goes on. Some of the greatest worked in the Big Apple. Lindsey Nelson, Bob Murphy, Phil Rizzuto. They were all beloved.

Through the decades, New York has also had some of the best local television sports anchors. Until ESPN established itself and certainly before the internet and Smartphones dominated our lives, local sports anchors were indispensable. In New York, depending on people’s schedules and preferences, fans tuned in their favorite sports anchors at either 10 or 11 o’clock. It was appointment viewing.

The Big Apple now has four network affiliates and two independent stations. Until the birth of Fox, it was three and three.

When sportscasts were enriched by satellite-delivered highlights, Warner Wolf’s, “Let’s go to the video tape” became part of the New York sports lingo just as “Going going, gone” had been in the heyday of Mel Allen. New York was well stocked with blessed studio talent. At the independents, Bill Mazer had encyclopedic knowledge, Jerry Girard deadpanned his reports with wit and subtle humor. For years, too, there was The Sweater, Russ Salzberg.

Sal Marchiano was seen on numerous channels in his long and illustrious career. Sal’s warm smile never faded and neither did his frank style of reporting. If he wasn’t busy enough calling games, Marv Albert brought rapid-fire accuracy to WNBC-TV for years.

When Marv’s national schedule brimmed and he left WNBC-TV, Len Berman took his seat. A New York kid who attended Syracuse, Berman was more than a talented anchor. He was creative. The great Marty Glickman thought very highly of him, telling me at one point that Len was also a blessed producer. He had worked at Channel 2 and wound up at Channel 4 for 23 years.

His creativity brought chuckles to many, not only locally. He developed Spanning the World. It grew into a popular segment made up of tidy clips of hilarious on-the-field bloopers. Spanning the World developed a national audience. For years, it was seen fairly regularly on NBC’s Today Show.

In time, the world changed. For most, technology evolved into science-fiction conveniences. For television though, it turned into an intractable juggernaut that even rattled the behemoth, ESPN.

Mobile technology sprouted and it shook local television to its core. Live play-by-play and video highlights were available to sports fans right on a Smartphone; in less than a New York second. For local anchors, it was insurmountable competition.

As ESPN grew and technology ballooned, television news directors at local stations pared the number of minutes sports anchors were given for their reports. Slowly, local anchors’ sway weakened and their names became less relevant.

For Len, the cutbacks took their toll. If facing the tyranny of the television clock every night wasn’t daunting enough, he lost his private office and was given a work station in the newsroom. Berman got the message. He left WNBC in 2009.

A few years ago, at a time when most would have thought of retirement, Len transitioned to being a generalist. He went from television to radio and from nocturnal to diurnal. Instead of working until midnight, Berman, 71, gets to his WOR morning show at 4am.

He has a knack for the human-interest angle that’s supported by diverse interests in many subjects. Berman seems comfortable presiding with co-anchor Michael Riedel during a timeslot once dominated by the iconic Gambling family. Politically, he’s open. Len told longtime New York anchor Tony Guida that he doesn’t label himself left or right. He rather examine issues topic by topic. In fact, he said that he voted for Barack Obama in 2008 and Mitt Romney in 2012.

We had a chance to interact about his new role, television, sports and more.

You’re continuing to have a long and sparkling career. You’ve done just about everything on television. Now you’re doing a general radio show each morning on a local New York radio station, one with great heritage, WOR. Other than having to start work at the crack of dawn, how’s the transition to radio?

Quite eye-opening. If you thought sports fans were rabid try political radicals on for size. And then try being the only liberal leaning voice on a conservative radio station, 710, WOR; between the hours of 6am and 6pm. I need a ruling. Some listeners call me an idiot and others call me a moron. Is one better than the other?

What is it that you like about both radio and the opportunity to expand beyond sports?

Despite the craziness, radio has been liberating. Four hours of radio is certainly less confining than a 3-minute TV newscast. And while I love sports, now I can talk about anything in the universe. I always read the newspaper front to back and was more likely to watch CNN than ESPN.  So I’m really enjoying the opportunity to talk about anything and everything.

You are in many ways a New York institution, a decades-long sports anchor, first on WCBS TV and then for years on WNBC TV. Do you miss it?

I honestly don’t miss sports. I do miss those special moments but they don’t come around that often. The day to day regimen of highlights and sound bites can be tedious at times. Having said that I loved every minute of my New York sportscasting career particularly the people I got to work with on and off the air.

News directors at television stations have downgraded sports’ visibility on the nightly news. The sports segment is often pushed back it to the end of the newscast and it’s given far less time and attention than it had. The decline began with the advent of ESPN and the enormous growth of the internet and mobile devices. What’s the future for local television sports? Is there a future?

I always battled with news directors over this issue. A local sportscast is in many ways more valuable than an ESPN hour. There, you have to wade through segments about LeBron James and NFL power ratings to maybe get a glimpse of your local team. In a local sportscast it’s all telescoped down in a couple of minutes. And viewers would like to know what their local sportscaster thinks about the issues. I had news directors who thought “all sportscasts are alike.” I tried to point out that what I was doing transcended sports. Since most of the people watching a newscast are not sports fanatics, I tailored my  sportscasts so that everyone would understand it. That’s why my feature Spanning the World was so successful. You didn’t have to be a sports fan to enjoy it. As long as there are news directors that “get it” there will be a future for local sportscasts.

It dawns on me that you and San Rosen (Fox and Rangers fame) both went to Stuyvesant High school in Manhattan. You’re about the same age. Were you classmates?

Weird story. Sam and I not only knew each other at Stuyvesant but we were friends. We both graduated in 1964 and he swears I wrote in his yearbook that “The Mets will win the World Series in 5 years.” I’ll take his word for it.

Who were the broadcasters you idolized growing up in New York?

My broadcast heroes were Mel Allen (I was a Mickey Mantle/Yankee fan) and Howard Cosell. For me Cosell actually “said stuff” and that made a big impression on me.

You did some play-by-play too, some football, some Celtics and the Big East in its formative years. What’s the hardest sport to do on television?

Would you believe the hardest sport I ever called was fencing at the Olympics? Both guys are wired up and the light goes on if they make a touch. Invariably both touched at the same time so the referee had to stop and explain what just happened  IN FRENCH, and then he awarded the point. I actually found archery and biathlon much easier to call. As for the “normal” sports, football is the toughest. It takes a week to prepare and with 22 large bodies colliding, it takes video review to figure it all out. And even then they don’t always get it right.

Marty Glickman had told me that you are more than just a sports broadcaster, you are a producer. In other words, you’re very creative. What were some of the features that you brought to television?

I loved Marty. I brought him to Syracuse to speak when I was a sophomore. I remember his speech to this day. “Speak English. You don’t hear a football player in the locker room saying ‘I toted the pigskin to paydirt.’ Nope, he carried the ball.” To this day I have never used a cliché. 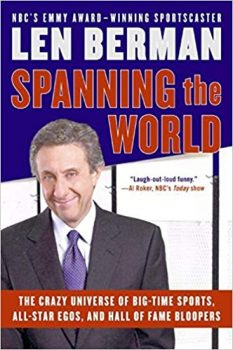 I had always considered myself a producer first. I thought the key was to put something interesting on the air and that took production values. I created Sports Fantasy (which ran on NBC Sports in the late 80s) where viewers could challenge pros. A teenage wheelchair basketball player beat Michael Jordan (who also played in a wheelchair). One guy beat Arnold Palmer at one hole of golf. A pastor had no chance standing in goal against Wayne Gretzky.

And then I created Spanning the World which started in 1987 and it ran locally and on the Today Show through 2017. It was more than just regular sports bloopers and we’d use the caveat “And nobody got hurt.” If we weren’t sure, we took the journalistic high road and just made it up.

What sports broadcast assignment would you still like to get that you haven’t yet?

I basically did everything I ever wanted to do. I guess in my next life I’d like to host an Olympics

If you had to give three tips to a budding sportscaster today, what would they be?

I’ll add a third. Take any job anywhere  even if it’s not in sports. My first job was actually as a TV news anchor/reporter in Dayton Ohio. And then I weaseled my way into sports. Don’t limit yourself when you’re starting out. Who knows? Maybe someday you too can wind up being called an idiot on the radio.

It’s good to hear from Len Berman again! I remember him doing the NFL pre-game show on NBC, and doing it so well. What he always has conveyed is warmth.