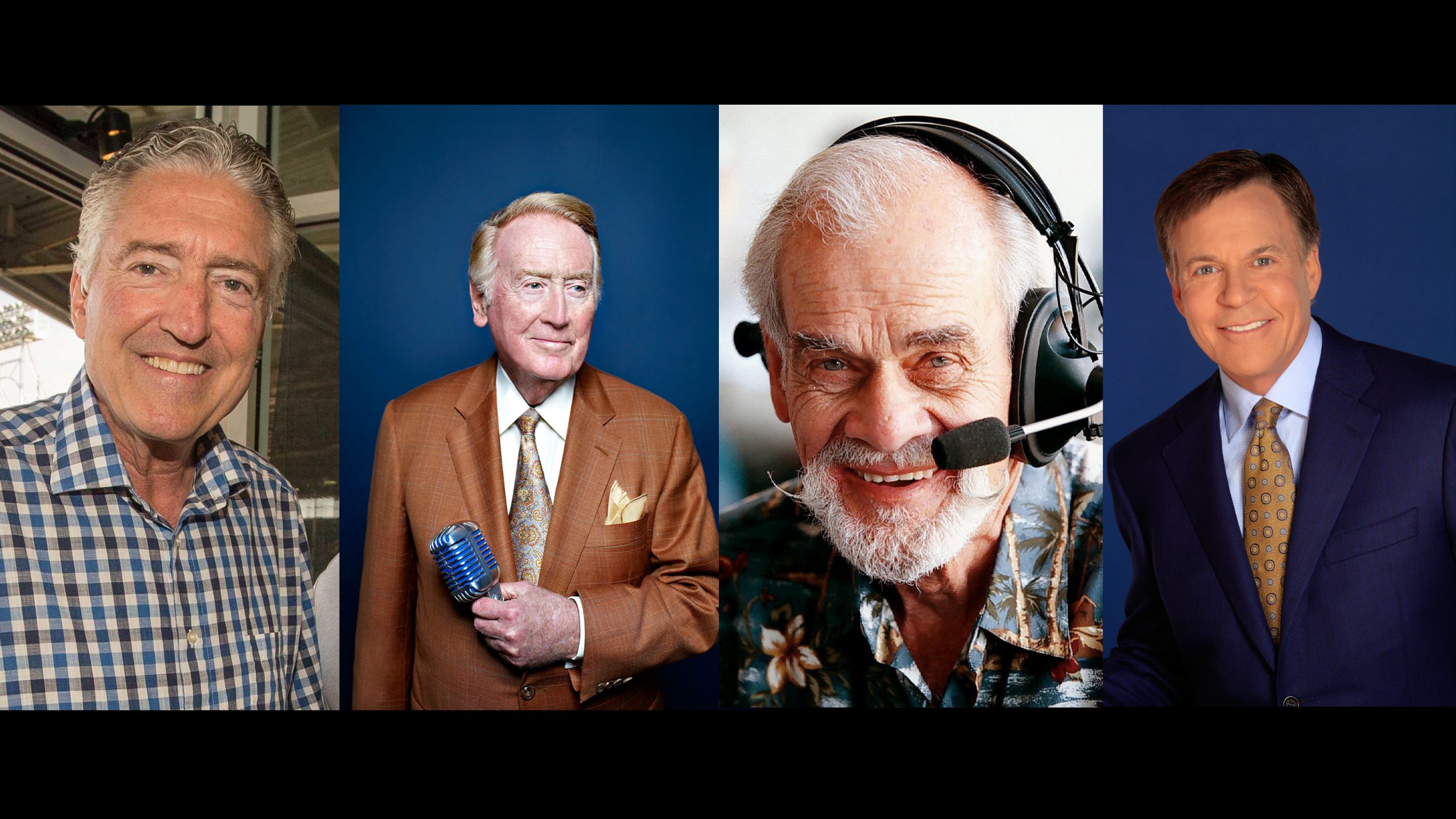 Pat Hughes (l) and his 3 all-time Grand Masters of sports announcing, Bill King (wearing headset mike) with Vin Scully to his right and Bob Costas to his left

In the second part of our series profiling Pat Hughes, the popular radio voice of the Cubs, we cover the rich landscape of sports broadcasting, the announcers who stimulated him in his youth and those he holds in the highest of esteem.

Asked for the best compliments he himself gets for his Cubs’ play-by-play, Hughes doesn’t hesitate: “I cherish letters and notes from the visually impaired. Television means nothing to them. Comments from the sightless like, ‘Your words alone allow me to see the game’ are sweet, stirring and mean so much.”

Pat has made an effort in recent years to perpetuate the legacies of the pioneering and longtime baseball broadcasting giants. He has produced CDs profiling over a dozen legendary and popular greats like Mel Allen, Red Barber, Bob Prince and Harry Caray.

You were born in Arizona and raised in Northern California. Who were your favorite announcers growing up?

Russ Hodges and Lon Simmons were the great Giants television and radio announcers. They were legendary. When I was a kid, I thought, of course, they were the best. And as I got older I realized Russ and Lon were indeed two of the greatest announcers ever; as evidenced by the Hall of Fame honors they received. Sadly, Russ was recognized posthumously.

In the Bay Area, I got to listen to Bill King. He did Warriors, Raiders and later Oakland A’s baseball. The motto that I follow today was one King shared with me, “You’re the eyes of the listener.”

At night during the baseball season, on KFI Radio, I picked up Dodgers games and of course Vin Scully was announcing. It should be pointed out that my parents are both from Missouri so when we went on vacations back to the Midwest in the summer, we would listen to Cardinals games. They had two guys, Harry Caray and Jack Buck. So I would say that at a very young age I was exposed to several of the all-time best sports announcers and perhaps on some level it is why I am in the business now.

You started in the big leagues on the television side with the Minnesota Twins in the 1980s. Which do you prefer, TV or radio?

I prefer radio. In fact, 35 of my 36 years in the big leagues, I’ve done radio.  Television makes more money. The economics dictate it. Radio in my view is more intimate. The radio announcer is given the opportunity to develop a closer relationship with the audience. Remember, the TV guys shut up for a long time. They’re captioning the picture. Pitches are being fouled off and often they say little or nothing. On radio, we’re the listeners’ companions. We also do every ballgame. Television doesn’t. The radio announcers cover post-season. Most TV announcers don’t do play-by-play on radio during the baseball playoffs.

When you called the last out of the Cubs’ world championship in 2016, who was the first person you thought of?

That’s a good question. Actually, I didn’t have time to think about it. I was working. I stayed focused and didn’t let my mind wander. I pointed out that the team was jumping around like ten year-old kids and that the Cubs ended the longest drought in the history of American sports.

It was very emotional. I thought of Ron Santo and Ernie Banks. Before the final out, as the Cubs were on the verge of winning game seven, I told the audience that they’ll remember where they were at the very moment the Cubs won the series. It would stand out. They’ll never forget it. I didn’t plan what I would say. I described the last play and went from there. I always felt I could have made a better call. I didn’t get hysterical.

Having played the game (one season at DI San Jose State), I loved doing basketball, both radio and television. I enjoy the pace and the athletes of course are great.

Did you get to know the inimitable Al McGuire?

Al McGuire was wonderful. We did broadcasts together and  never a bad moment. There was lots of laughter. Every day was almost an unpredictable and entertaining adventure. I’ll share two stories.

When we finished a broadcast in Louisville one day, I say to Al, Let’s get a cab to the airport. He says, “Why waste money on a cab? Let’s hitchhike.” So there I am, standing with this famous coach outside the arena, my thumb up, hitchhiking for the first time in my life.  Before long, a guy sticks his head out and shouts, “Hey, you’re Al McGuire. Hop in the backseat.” We jump in with a perfect stranger. Al regales the driver with stories and he’s laughing all the way to the airport. McGuire tells the driver about his arguments with referees, coaching in the 1977 NCAA title game against Dean Smith, how he coached against John Wooden. It was a surreal experience. I didn’t say a word. When we got to the airport, I said to him, You’ll probably put in for a cab expense. He says, “No. I don’t need to cheat the small stuff. I have enough big scams going on.”

We had a game in Charlotte and I get in a night before. The next morning I call my wife to check in. She says “I got a strange call from Al. He wanted to know where you were. I told him you were in Charlotte for the game. He told me, ‘Oh, thank you. So that’s where I’m supposed to be. I’m still in Milwaukee, I better got on my way.’” Al gets on a plane. He hasn’t shaved in a week. He gets to the arena 90 minutes before tipoff, completely unprepared. He scurries around, finds a Charlotte assistant, pulls him up to the stands and gets a lowdown on the team. He tells him, “Thanks, that’s what I need.”  Al then cleans up and gets dressed. We go on-air and he goes on about Charlotte, spewing back everything he had just heard from the assistant. I’m shocked, laughing and thinking he didn’t even know where he was supposed to be and now he’s coming off like Mr. Homework.

If you agree that Vin Scully is the best baseball announcer ever, what makes him unequaled?

His vocal artistry, intelligence, smoothness, sense of humor, wit, command of the language and dedication. Even at the end of his career when he was almost 89, he did extensive research. Vin’s recall was phenomenal.

At the time of his classic call of Koufax’ perfect game in 1965, Vin was only 37! It was extraordinary. At that young age he adlibbed a half inning better than a team of top writers could script. Remember too, the Dodgers had many good years when Scully was their announcer. (They had only 12 losing seasons in his 67 years in the booth, 55 winning seasons.)

Vin was always warm. He gave me a big smile when he saw me, “Hello, Pat.” I loved him. He was always friendly. Yes, he is the greatest ever. There is no one close.

I have my three Grand Masters. Scully, Bob Costas and Bill King. They all do or did something that the rest of us cannot do!

‘Grand Masters,’ I like the term. In addition to Scully, you include Costas and King. What puts them on this richest of gold standard lists?

Bill King was one of the first greats I heard. His broadcasts were delivered at an amazingly rapid-fire pace. Yet every word was clearly enunciated. Bill had a knack for building drama naturally but was never hysterical. His language, jargon and knowledge were extensive. He profiled players and painted pictures beautifully.

For my money, and in my humble opinion, I would say the Bill King is the greatest all around radio play-by-play man in the history of our country! I don’t think anybody else is even close.  if you listened to him you know exactly what I’m saying. If you’ve never listened to him he was so amazingly good that it would take about ten hours to explain all the reasons. King was phenomenal.

King called the Raiders, Warriors and later the A’s. I appreciated his Warriors broadcasts when they were simulcast. He was spot on. He provided a thorough radio description and if you were watching, which I often did, his call matched exactly what you were seeing. His descriptive powers were vivid, “A leaping midair battle for the rebound!”

One day, I’m watching Bob on the Daily Show with Jon Stewart and I said to myself, Jon summed up his talent perfectly. Stewart asked Costas some question and Bob answers it in paragraph form, never hesitating for the right word for a fraction of a second, putting the perfect emphasis on the right subject and verb. When Bob finishes, Stewart says to him, “It hit, just hit me. You speak the way writers write; in full sentences, in full paragraphs. There’s a beginning, middle and end.” And it’s exactly what I thought but I never articulated it the way Jon Stewart did. Stewart nailed it. Costas speaks better than the way writers write. He’s an amazing fit.

He’s so versatile. Bob was tremendous on the Olympics, sports studio work and Later with Bob Costas. His radio show was engrossing. His knowledge of all subjects is deep. On a play-by-play front, he did basketball on the radio with the Spirit of St. Louis, television play-by-play of football, baseball and basketball. He had a classic call of Michael Jordan’s final shot in the’98 NBA championship. He’s a fun listen. Bob works well with his partners, he’s not afraid to joke; recognizing that the allure of sports is enjoyment.

Costas is also a decent guy. When he was selected as this year’s winner of the Hall of Fame’s Ford Frick Award, I sent him a text. I said, “Your talent always seems to come from a different galaxy.” And with all he had going on at that moment, he got back to me within 15 minutes. He’s a real good guy!

More from Pat Hughes including CDs on the pioneering greats of baseball broadcasting and copies of his personal Game #7 2016 World Series scorecard are available at http://baseballvoices.com/

Pat Hughes: From #2 in Milwaukee to #1 in Chicago; Popularity of Cubs’ radio voice is swelling