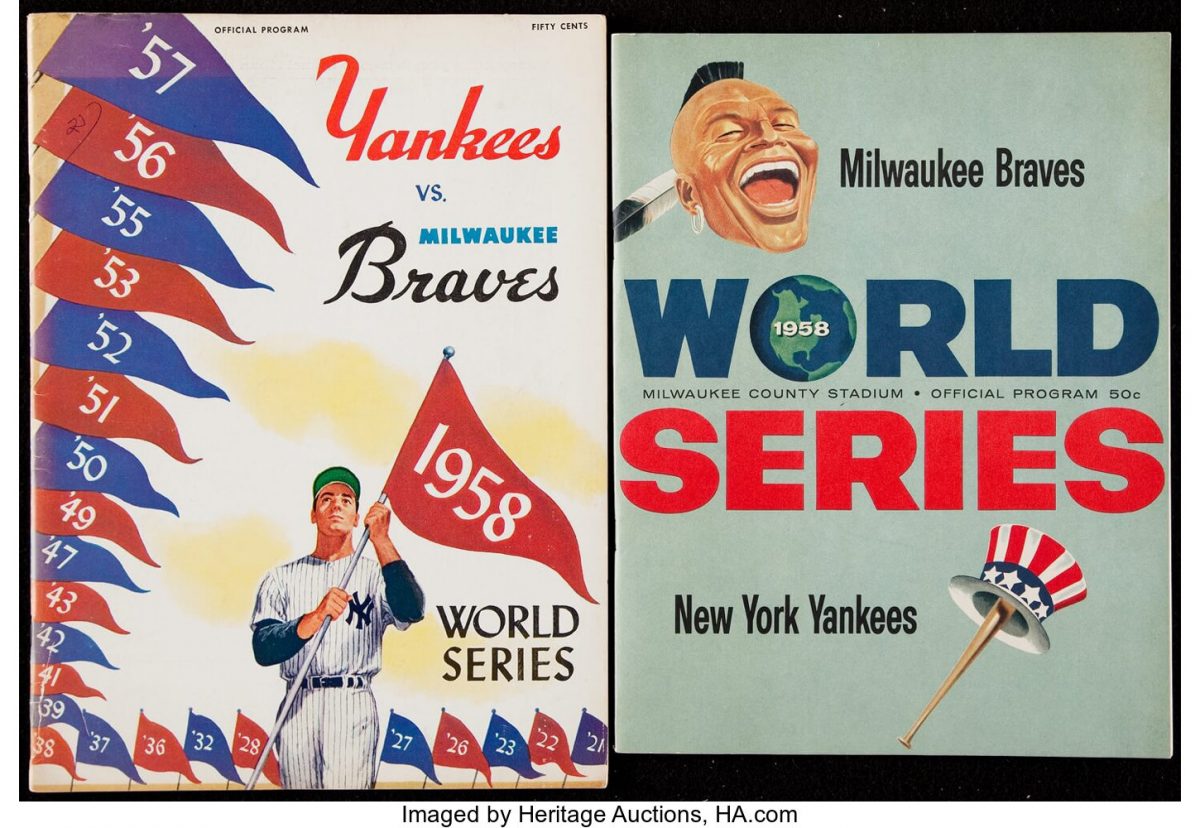 Curt Gowdy and Mel Allen did the 1958 World Series. It was Curt's first of 12. He also did 7 Super Bowls and 9 Final Fours. His warm, husky and cozy voice was always welcoming.

Marty Glickman: “Curt Gowdy was one of the most generous men in the business.”

From the start, Gowdy also became the Peacock Network’s baseball Voice, showing, said Lindemann, how “Chet Simmons [ultimately, NBC Sports president] and I liked the way Curt broadcast”—fact, not fluff. Gowdy later became the very symbol of NBC Sports. The downside was that putting all of baseball’s TV eggs in NBC’s basket gave other networks no reason to promote it.

What if Curt’s voice was not a fever-swamp? He was accurate, fair, and had a Chip Hilton mien. Surely, that would suffice. Gowdy’s first Series had been 1958’s Yankees-Braves, his back so bad that Curt slept on a hotel floor, “the maids thinking I was nuts.” Next he did 1964’s Cardinals-Yanks: “There’s a high drive to deep right! And forget about it! It is gone! The ball game’s over [2-1, in Set Three]. Mantle has just broken a World Series record. He now has 16 World Series home runs,” breaking Babe Ruth’s record 15. Local-teamers had largely called the Series before NBC’s pact. Now it became “The Wyoming Cowboy” and company, Curt growing up in Cheyenne. 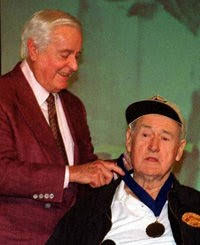 In 1967, four of the seven Series sets in the Fens, Curt conveyed a familial feel. In 1969, he tried to explain the inexplicable. Having previously ignored the lowly Mets, Game headlined the Amazins’, New York taking the Fall Classic: “There’s a fly ball hit out to left! Waiting is [Cleon] Jones! The Mets are the world champions!” In 1970, the Orioles’ Brooks Robinson auditioned for TV’s Biography: “Look at that grab! He’s playing in another world!” Gowdy said. By 1974, “The Oakland A’s [had become] the first team since the New York Yankees to win three world championships in a row!” For a long time, Curt’s quality and wearability fused. (Gowdy and Ted Williams, friend and Red Sox super-star whom he covered in Boston.)

Meanwhile, Gowdy ferried even more All-Star Games (16). From1959-62, baseball yearly played two sets to aid the Players Pension Fund. In 1959, Curt did the first in Los Angeles; 1960, both Kansas City and New York; 1961, second in Boston, a 1-1 game halted by rain; 1962, second at Wrigley Field. In 1966-70 he aired five straight American League losses. In 1971, all scoring stemmed from six homers at Detroit: A.L., 6-4. Memorably, Reggie Jackson hit “one [that] is going—way up! It is—off the roof! That hit the transformer up there!” Gowdy would have enjoyed the A.L.’s current nine-game W skein, his last All-Star play-by-play in 1972-74’s Atlanta, K.C., and Pittsburgh, the Americans reverting to losing form.

Even so, Goody was most synonymous with baseball. Weekly he met in New York with Reese or successor Tony Kubek and Game’s producer, director, and cameramen. As others haggled, the star raised a hand. “Yes, Gowdy,” they sighed. Curt: “What about the ball game?” Staff: “Hell with the ball game. We have to have the opening and the close.” Curt: “Fellas, we’re here because of the game.” In 1972, NBC began a 10-set nightly Monday Game of the Week, next year beaming 15 prime-timers. On Monday, April 8, 1974, Hank Aaron made history, hitting his 715th career [Babe Ruth-breaking] home run. “That ball’s hit deep . . . deep . . . it is gone!” Gowdy said. “He did it! He did it! Hank Aaron . . . is the all-time home run leader now!”

In retrospect, October 1975 became Curt’s The Last Picture Show. By then, Garagiola, had begun sharing play-by-play, even as Curt’s Red Sox won a pennant and LCS. In the Series, the Reds, ahead, three sets to two, led Game Six, 6-3. Two Sox reached in the eighth inning. Then: “[Pinch-hitter Bernie] Carbo hits a high drive!” said Curt on NBC Radio. “Deep center! Home run! . . .  It came with two out! And the Red Sox have tied it, 6 to 6!” At 12:34 a.m., Carlton Fisk hit a 12th-inning homer, Gowdy beaming, “They’re jamming out on the field! His teammates are waiting for him! And the Red Sox send the World Series into Game Seven with a dramatic seven to six victory. What a game! This is one of the greatest World Series of all time!” (The drop in ratings since: 1975: 28.7 on NBC. In 2021 on Fox. 6.5. They’ve plummeted 77%.)

With curious timing, NBC next month sent Lindemann to Maine, where Curt was filming Sportsman, to tell perhaps the age’s pre-eminent sports Voice that he was through. Likely causes compounded one another. A writer once said, “Putting a town into a piece about Gowdy is like trying to establish residence for a migratory duck.” Eventually, such overexposure led so many to send critical letters to The Sporting News that it routed them to NBC. Curt frowned on hype. The 1970s smiled. In 1975, having learned exclusivity’s peril, baseball added newer-age ABC to NBC. Trying to seem livelier, the Peacock Network gave Garagiola all play-by-play.

In 1960, the last year that all three networks carried baseball, 34 percent of Americans in the Gallup Poll named it their favorite sport. Only 18 percent had by 1974, interest nationally ebbing after Dean’s Game ended in 1965. Baseball’s TV diminution spurred that decline, Gowdy getting disproportionate blame. After his Game ended, Curt, a child, like Ted Williams, of  “The Greatest Generation,” became a “roving [1978 Series] reporter,” worked briefly for CBS TV, wrote his second of two books, appeared in five movies, and did 1985-86 CBS Radio’s Game—his manner, as always, as sturdy as a post.

Curt received the Baseball, Basketball, and Pro Football Hall of Fame(s) award for broadcast excellence, even serving for seven years as president of the basketball shrine, which created print, electronic, and transformative media awards in his name. On August 28, 2005, returning to Fenway Park, he  got an ovation from his “friends and neighbors,” a pet Gowdy term. In 1998, Curt narrated “Casey At The Bat,” with the Boston Pops, at Tanglewood. The Cowboy died in 2006, of leukemia, still calling his rendition of the baseball classic “my greatest thrill”—a final index, if any were necessary, of the character at his core.

CURT SMITH is the author of 18 books. Since 1998, he has been Senior Lecturer of English at the University of Rochester. curtsmith@netacc.net

I always loved Ned Martin’s comment along the lines that maybe Gowdy’s success at NBC was to repay what he went through watching those bad Red Sox teams! Gowdy’s story is also the problem of overexposure. He and Chris Schenkel both took a lot of terrible hits over the years, and I think they were on too much and probably spread too thin. I think of a story about Dick Enberg. When he went full-time with NBC, he told them he would do no more than 50 events a year. Fine–he would do the NFL and college basketball, a bowl… Read more »