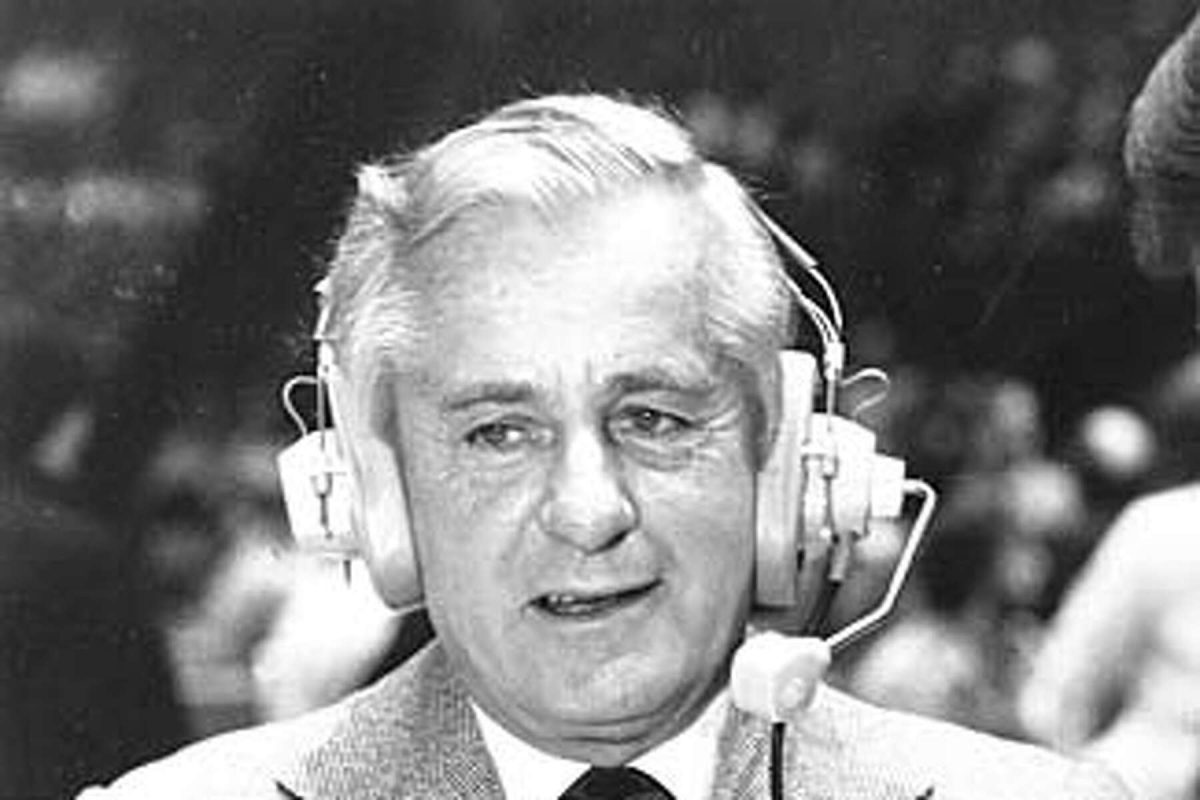 A dominant decade plus. When NBC owned it all, Curt Gowdy did just about everything; the All Star Game when it mattered, the NCAA Finals, the World Series, the AFL Championships and the Super Bowl.

Through 1975, Curt was as much as did network baseball—especially at this time of year, voicing Game and the Mid-Summer Classic. Airing it and numerous other sports, he earned 13 Emmy Awards, sportscasting’s first George Foster Peabody award in 1970—and 23 Halls of Fame honors/inductions including the International Game Fishing’s, Gowdy saying, “I was born with a fly-rod in one hand.” Always the Rocky Mountaineer conjured respectability, good manners, and pluck.

Invariably, Curt kept ego in check, saying that “A Voice is no better  than his script.” Beyond the Series (he did 13) and All-Star Game (16), Gowdy defined NCAA basketball’s Final Four (24), the Rose Bowl (14, coining “The Granddaddy of Them All” from the Cheyenne Frontier Days of his youth), Super Bowls (9), Olympics (8), ABC’s 1965-86 The American Sportsman, and PBS’s 1970s The Way It Was. As ESPN’s Chris Berman memorably told The New York Times: “When Curt Gowdy called a game, it was big.” 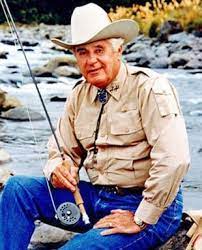 Born in 1919 in Green River, Wyoming, Gowdy, like many small-town boys, grew up stirred by distant wonder. His dad, a Union Pacific Railroad manager and dispatcher often called the best fly fisherman in the State, said, “Curtis, there’s a big world out there. Someday I’d like to see a big-league game.’” His mother, a disciplinarian, imposed a must-do list including typing, elocution, and reading one book a week. He had to keep grades up to play basketball, Gowdy’s high school team winning 31 straight games. (Gowdy, the outdoorsman, left)

In 1938, the All-Stater entered the University of Wyoming. Six letters later he graduated, joined the Air Force, but left with a basketball-related ruptured disk in his spine. Back surgery failed: for 10 months Curt lay desolate in a hospital. Finally, doctors sent him home to rest, saying, “With luck you won’t be a cripple.” In Cheyenne, Gowdy’s home since age 6, he eyeballed ghosts: friends had joined the service. Then, one day the manager of the city’s sole radio station, KFBC, phoned. “There’s nobody else,” Bill Grove told him. “I need you to call football.”

Curt described tiny Pine Bluff and St. Mary’s six-man game, sans a yard line, sidelines, goal posts, or player numbers. The man later called “The Wyoming Cowboy” stood on a soap box, “guessed where the ball was, and made up names,” he said. For two years Gowdy broadcast sports and “big events like Santa Claus’s arrival” in December until, seemingly by fate, the owner of 50,000-watt KOMA Oklahoma City, driving through Wyoming in 1945, heard Curt on the car radio. He soon hired him to call Hank Iba’s Oklahoma State hoops, Bud Wilkinson’s football Sooners, and the Triple-A Oklahoma City Indians: “the biggest break of my career.”

To Gowdy, the minors were a workshop: “all the demands of the sporting broadcast business—ads, production, play-by-play—in one.” He impressed General Mills’ Frank Slocum, whose Wheaties cereal sponsored the Yankees, then seeking a No. 2 announcer. Hearing Curt in 1948 , Slocum passed his brochure and audition tape to the pinstripes’ Voice, Allen, who, meeting Gowdy, liked him instantly. “I would have settled for nothing,” said Curt. “Fortunately, I didn’t have to.” In his 1949 rookie year, he found Mel a taskmaster, even correcting him on air.

The ’49 Yankees trailed Boston by one game with two left in the regular season: Red Sox at The Stadium. The crowd’s noise, Curt said, “must have been heard in Jersey City.” The Yankees won the first set, 5-4. Next day, a Sunday, they led, 1-0, when Sox skipper Joe McCarthy yanked pitcher Ellis Kinder in the eighth inning, the Bombers dropping a four-spot. In 1945,  Ray Milland starred in the Oscar-winning film The Lost Weekend. New York’s 5-3 triumph completed the Sox’ lost weekend. On the train back to Boston, Kinder slugged McCarthy in the jaw.

In The Old Man and the Sea, Santiago tells Manolin,” Have faith in the Yankees, my son.” Gowdy became a believer, the Yanks taking the 1949-50 Series. He also feared Allen would never stop calling them. When announcer Jim Britt left the Olde Towne Team in 1951, Goody was offered Jim’s job, saying “Part of me knew this was my chance to be Number One.” Another part loved New York. Wanting to help, Allen said he would piggy-back Curt to Boston. “Six states, great fans,” Gowdy would one day say. “Today, I can’t believe I was torn.”

Later, Gowdy said of 1951-65, “It was the happiest 15 years of my life.” They  began with two losses in the Bronx, the Red Sox scoring once. Curt got telegrams—“Go back to New York, Yankee lover”—inanely assigning blame. Worse, Gowdy mucked up the brogue of area burgs with an English accent, Sox owner Tom Yawkey hiring a speech tutor. Back at Fenway Park, he learned that Yawkey wanted to see him. Shaken, Curt walked from the field to his boss’s office, a psychic noose around his neck.

“I just want to welcome you to the Red Sox,” Tom began. “I followed you in New York and liked it.” Listening, Curt exhaled. In time, Yawkey became a second father. When Gowdy injured his back in 1957, missing the entire year, the owner told a neurosurgeon, “I don’t care how long this kid misses, he’s got a job here.” Pro: Curt inherited the league’s largest radio network. Con: The Sox almost never contended. A lousy farm system and front office presaged Saturday Night Live’s Roseanne Roseannadanna: “If it’s not one thing, it’s another.”

Ted Williams could intimidate. By contrast, “The Kid” was a sucker for kids, flying his own plane to inspire ill children in a hospital—on two conditions: no media, and no one would mention it. No. 9 had an opinion on everything, notably the best gun, bat, or stream to fish. “That was our tie,” Curt said, “and only then baseball.” In World War II and Korea, the Navy and Marine pilot’s 20/10 vision astounded brass. Later, Ted used it to hunt with Gowdy. “There! Watch two ducks coming at 3 o’clock,” he boomed. Curt: “Where?” Williams: “There!” In two minutes, ducks appeared.

Gowdy styled Ted “the most competent man I ever knew. Best hitter. Best fisherman. Best hunter.” Once U.S. Senator and former astronaut John Glenn told Curt that he had been Williams’ Air Force flight commander in Korea, Ted his wingman. Gowdy: “What kind of a pilot was he?” Glenn: “Best I ever had.” Most famously, he swung a bat as magically as Jascha Heifetz played a violin. In 1939-42 and 1946-60, losing all or parts of five years to war, Williams topped the league six years in batting and four in homers and RBI. “Take away World War II and Korea,” Curt said, “and Ted’d own the record book.”

On September 28, 1960, Curt had a tape recorder break and arrived only 30 minutes before the Sox last home game, learning that Williams, with a chest cold, would miss that weekend’s three-game finale in New York. Sensing it, Curt asked, “Are you [retiring]?” Ted: “Yeah, don’t mention it till the game starts.” Before the game, the Sox retired his number on the field. Without a note, Gowdy told  the crowd, “What really made Ted was pride. He had an intense pride that every time up he wanted to produce a hit. Not only for himself, but for the fans at Fenway whom he secretly loved, who stood behind him amid ups and downs . . . The greatest hitter of all time, Ted Williams.”

Moved, Williams whispered, “I want a copy. That’s one of the nicest tributes to me ever.” Curt: “I don’t have a copy.” Ted: “Oh, sh–,” walking to the mic. To the last, the Big Guy, as soon-to-be Sox Voice Ned Martin coined him, was himself, pricking reporters, hailing Yawkey and “the greatest fans in America,” and playing in the game v. Baltimore. Ted made out his first three at-bats. In the eighth inning, he faced Jack Fisher, born in Williams’ 1939 rookie year. It was raining, lights on, the ball not carrying. Gowdy’s subsequent WHDH call was thought lost till found by ESPN in 2000.

In Ted’s last at-bat, Curt, incredulous, bayed: “There’s a long drive to deep right-center! It could be! It could be! It is!” he said, voice breaking. “It’s a home run! Ted Williams has homered in his last time at bat in a Red Sox uniform! . . . At home plate, they’re waiting for him!” Curt recalled being “choked up. My heart was pounding. Unbelievably emotional.” With “Teddy Ballgame”—another of Ted’s many monikers—retired, the early-’60s Red Sox devolved into caricature, first baseman Dick Stuart a.k.a. “Dr. Strangeglove” once getting a standing ovation at Fenway for picking up a hot dog wrapper without dropping it.

If Gowdy earned his pay as Voice of the Red Sox, he merited a bonus with 1960s and ’70s network television. Tomorrow, we recall how The Cowboy became a national household name—and a paradigm of play-by-play.