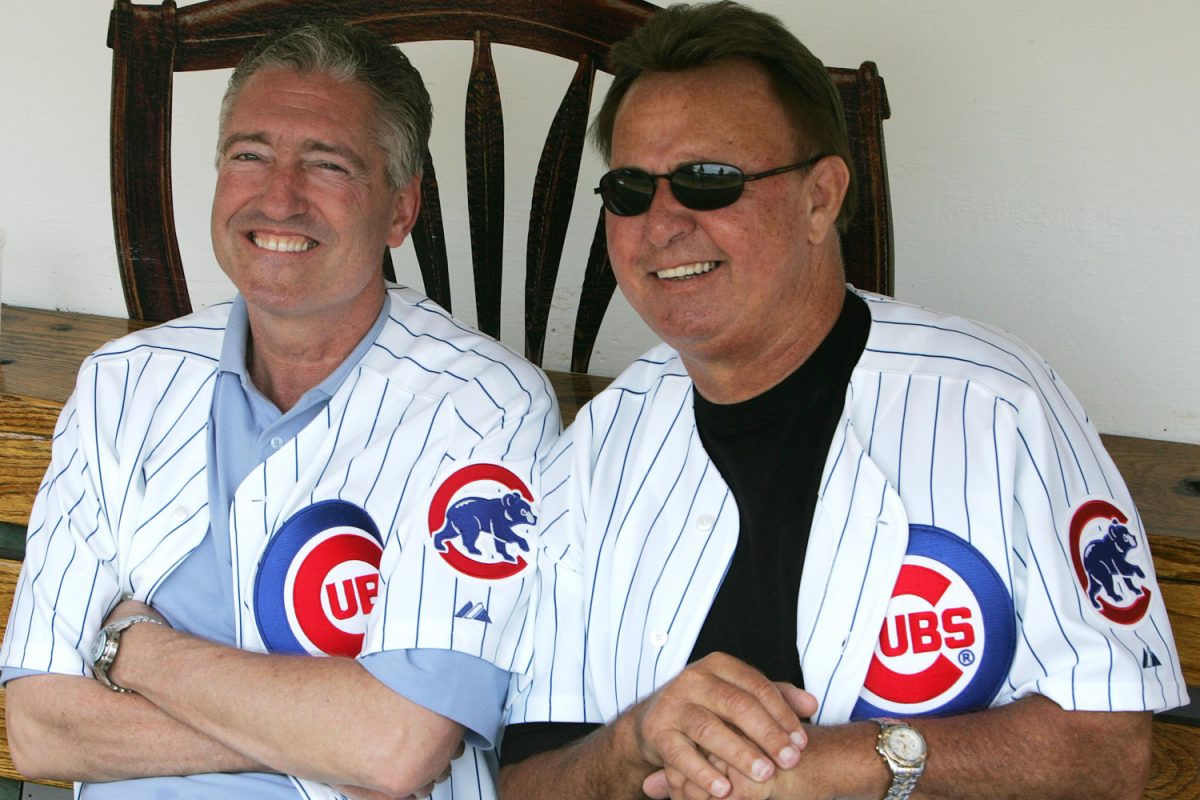 In 1982, Hollywood released a sublime film, My Favorite Year, starring Peter O’Toole as its swash-buckling hero. Prior to this week, broadcaster Pat Hughes’ favorite year might have been 1983, making the majors with Minnesota; 1998, narrating Mark McGwire and Sammy Sosa’s home run derby; or, 2016, calling the Cubs’ first World Series title in 108 years.

At noon, EDT Wednesday, each was arguably surpassed, the National Baseball Hall of Fame and Museum naming Hughes the 47th recipient of the Ford C. Frick award yearly given to an announcer for “broadcast excellence”—to many, sport’s most prestigious individual radio/TV honor.

Hughes, to receive the Frick Award July 22, 2023, in Cooperstown, was picked by its 13 living recipients and three broadcast historians and columnists. Criteria included “commitment to excellence, quality of broadcasting abilities, reverence within the game, popularity with fans, and recognition by peers.” The selection coincides with the first year of a composite ballot of local and national voices active now or at some point since 1994, the start of baseball’s wild-card era.

“Since arriving at Wrigley Field in 1996, Pat has served as the radio voice for nine postseason teams—matching an ardent fan base with his own passion in every broadcast,” said Hall President Josh Rawitch. “His reverence for baseball history and gift for storytelling have made him one of the game’s broadcast treasures.” Were they alive, Jack Brickhouse would add “Hey-Hey!” and Harry Caray “Holy Cow!” —also Jimmy Dudley, Bob Elson, Gene Elston, Milo Hamilton, and Russ Hodges. Each past Cubs Voice received a Frick Award.

Born on May 27, 1955, in Tucson, Hughes was raised near San Francisco, weaned on Giants mic men Hodges and Lon Simmons. “I hung around Candlestick Park to see the players,” he said, one day sneaking into the visiting Cubs clubhouse, “Billy Williams, Ron Santo, and [in particular] Ernie Banks so friendly shaking my hand.” Such comity presaged destiny. By the time Pat was shooed out, radio’s future Cubbies play-by-play man panted for the bigs.

Afterward Hughes termed Nixon “the most memorable of all the people that Bob had met.” On air he asked, “Bob, how’d it go?” Uecker replied: “Pat, you know what, Richie was a pretty good guy.” Richie!? “Richard Nixon was an incredibly controversial person who was called every name in the book,” Hughes marveled. “Mr. President, Richard, Richard Milhous, Dick, by some, Tricky Dick, by others. But never Richie!” 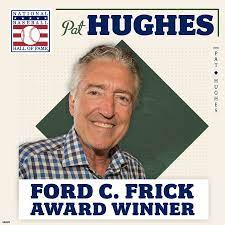 In 1994, I began talk radio on Milwaukee ABC affiliate WISN. By then, Uke was an American institution, joking that he had “once been arrested for the cops for impersonating a player.” He was hugely popular, a home-town boy calling his-town team. What also wowed was Hughes on play-by-play using his fine voice, humor, and knowledge of the difference, as Caray said, between “a game that speaks for itself [say, 5 to 4 thriller] and a turkey [ 20 to 2] where you have to speak for the game” to forge a following of his own. The Cubs took note.

Baseball was still reeling from 1994-95’s 232-day work stoppage when Chicago’s National League club made Hughes its radio Voice in 1996. Recalling his youthful Cubs clubhouse, Pat arrived at a vortex of marquee names and magical events. For five decades Brickhouse had roused each side of the Second City. Retiring in 1981, he died in 1998, having penned a tombstone: “Here lies the guy who could do the best soft-shoe anywhere for ‘Tea for Two.’” Caray also voiced the 1971-81 White Sox and 1982-97 Cubs. His caricature was the message, and Harry’s message was gold.

For the past decade, Caray on TV had dwarfed Cubs wireless. Hughes was a different story, Harry both liking and respecting him. Affection was reciprocal. Hughes marveled at Caray each day baying, “You can’t beat fun at the old ballpark!”—a view Pat shared. Once the Cubs’ Sosa homered to win a game. On post-game, Hughes heard Caray, 80, in the background bellow, “How about those Cubbies?”—to Pat, “still a 10-year-old and a senior citizen.”

Hughes evoked the adage that “‘a great man is someone who never reminds us of anyone else.’ By that criterion, Harry was great.” Late in this career, Caray began drinking hot tea and eating lemons to renew his voice. One day he had a tea bag in the cup, voices saying, “Harry, put the tea down! We’re going on the air!” Harry: “OK, right there!” Trying to remove the tea bag, he put on a headset, the cord and tea bag string tangling. Caray opened WGN’s telecast with a bag hanging from his left ear: “‘Hello everybody!’” Pat said in wonderment, “You had to see it to believe it!”

In 1998, Harry fell dancing on Valentine’s Day, hit his head, had a heart attack and coma, and died four days later, WGN TV beaming the funeral procession. Upon Chicago’s 2016 title, Anheuser-Busch reprised Caray’s 1980s classic “Cub Fan/Bud Man” ad. Good team or bad, Harry had been its mouthpiece. After his friend’s death, Hughes on radio improbably inherited that mantle, in an age where TV was king.

Pat’s coming out occurred during 1998’s “record-assaulting, home run-blasting summer,” wrote Sports Illustrated. At water coolers, bars, and stores, Sosa and McGwire fused echo chamber and rumor mill, each trying to top Roger Maris’s 61 homers in 1961. Sammy had never had 40 dingers: on June 20, he lashed No. 20 of the month. “For Sammy and Big Mac [St. Louis’s McGwire],” said Pat, “everything about it was big.”

On September 8, Mac lashed a pitch to “deep left left—this could be it!—it’s a home run!” Hughes voiced. “Number 62 for Mark McGwire!” Pausing, he resumed: “A slice of history and a magical moment in St. Louis!” Mark hugged his mates and 10-year-old son at the plate. Sosa clasped him near the first-base line. “Incredible. I had tears in my eyes,” said Hughes. Fox’s Joe Buck and St. Louis’s Mike Shannon also aired the blast, Pat’s call the most replayed.

On September 11, Sosa’s No. 61 and 62 left the Friendly Confines. Of 65, Hughes cried, “‘Holy Cow!’ and ‘Hey-Hey!’ for Harry and Jack!” Sammy’s 66th, his last, briefly took the lead. Ultimately, he smashed at least 50 home runs yearly through 2001. Later Major League Baseball released a video, Race for the Record, about Sosa’s and McGwire’s mano a mano year.

In the last week, the Cubs, Mets, and Giants vying for a wild card, Chicago left fielder Brant Brown dropped a two-out ninth-inning fly—”Brown goes back.” Hughes said, “ and he drops the ball!”—three unearned runs giving Milwaukee an 8-7 stunner. The muff led Cubs now-analyst Ron Santo to scream “Oh, nooo!”—to Pat, “like losing a family member. Ron’s head was practically glued to the table. For a minute, I thought he had expired, jabbing him with my finger to see if he was alive.”

Santo never forgot 1998. More setback followed, mocking the law of averages. In 2002, he had bladder surgery and both of his legs amputated due to diabetes. Next year the Cubs led the League Championship Series, 3 sets to 1. In Game Six, up, 3-0, they were five outs from a first World Series since 1945. The Marlins’ Luis Castillo sliced to left. Pat: “Toward the line … Does he [Moises Alou] have room? And leaping up, Alou cannot make the play!” Analyst Steve Stone yelped: “And Moises is unhappy with the fan [Steve Bartman]! A fan interfered with him! . . . If a fan just gets his hand out of the way, Moises makes the catch!” Only with the Cubs.

The Fish won, 8-3. The LCS epilogue wrote itself. Said Pat: “The Florida Marlins have stunned the Chicago Cubs winning the last three in a row!” A year later the Wrigleys blew a last-week wild card. Meantime, Pat and Santo, a 1960-73 Cubs All-Star third baseman, forged grand chemistry. As a player, self-discipline had made Santo an All-Star. Behind the mic, his lack of discipline led to Pat‘s 2001 poignant tome, Ron Santo: A Perfect 10. In 2006, he also authored Harry Caray: Voice of the Fans.

“Like Uke and Harry,” Hughes said, “Ron was a wonderful piece of work.” One night at Shea Stadium, Voices stood as usual for the National Anthem, a heater in the booth above their heads. Prematurely bald, Ron got too near it, halfway through the song Pat smelling something burning. Santo’s hairpiece was on fire, “smoke billowing out the top of his head!” said Hughes, splashing water to douse it. Ron then asked, “How does it look?” Pat, lying: “Not that bad,” a divot creasing the middle of Santo’s head. By the way, the Mets starting pitcher was Al Leiter.

As noted, in 2016 the Cubs edged Cleveland in a gemstone Fall Classic: Hughes the only Voice to ever call their title, radio unknown in 1908. “A little bouncer slowly toward [third baseman Kris] Bryant,” Pat said in Game Seven. “He will glove it and throw to [first baseman Anthony] Rizzo! It’s in time! And the Chicago Cubs win the World Series! [8-7] The Cubs come pouring out of the dugout, jumping up and down like a bunch of delirious 10-year-olds! The Cubs have done it ! . . . And the celebration begins!”

Game Seven ended in Cleveland just after midnight Eastern Time on November 3. A day later a parade in Chicago said to be the largest-ever lured an estimated five million people. Pat acted as master of ceremonies at a massive rally, hailing an event—“The Chicago Cubs win the World Series!”—that many thought would never happen. Courageously, Hughes kept private what baseball only later learned: he had recently endured three throat surgeries over 14 months due to a precancerous lesion.

Again healthy, Hughes resumed a special chapter of his career. In 2006, he released the first CD in his seminal “Baseball Voices” audio series on 17 Frick honorees from Buck, Caray, and Brickhouse to Vin Scully and Bob Costas. Another relives the 2016 Cubs. Hughes is each’s producer, writer, and narrator, fusing biography, interview, and play-by-play from sources like the Hall’s audio library. A gift to Pat’s craft, the series “keeps me busy in the offseason,” he jokes. In truth, with Hughes it is hard to define where the season ends and offseason begins,.

Pat has written forwards to 10 books, graced three documentary films, and for millions become a symbol of his franchise’s ineluctable lure. If and when the Cubs repeat, Chicagoland hopes that they are still voiced by Hughes. For now, paraphrasing what Pat said in 2016, let us say of his Frick Award: Let the celebration begin. Above, Ron Coomer (left) with Pat Hughes, two men made for one another. They’ve sincerely loved the game for decades. Coomer is Pat’s second Ron in Wrigley. Ron Santo, and Pat combined to make a humorous and unpredictable partnership too.

I’m so happy for Pat Hughes, a great broadcaster and great gentleman. And I think I know who should be the subject of his next CD tribute!