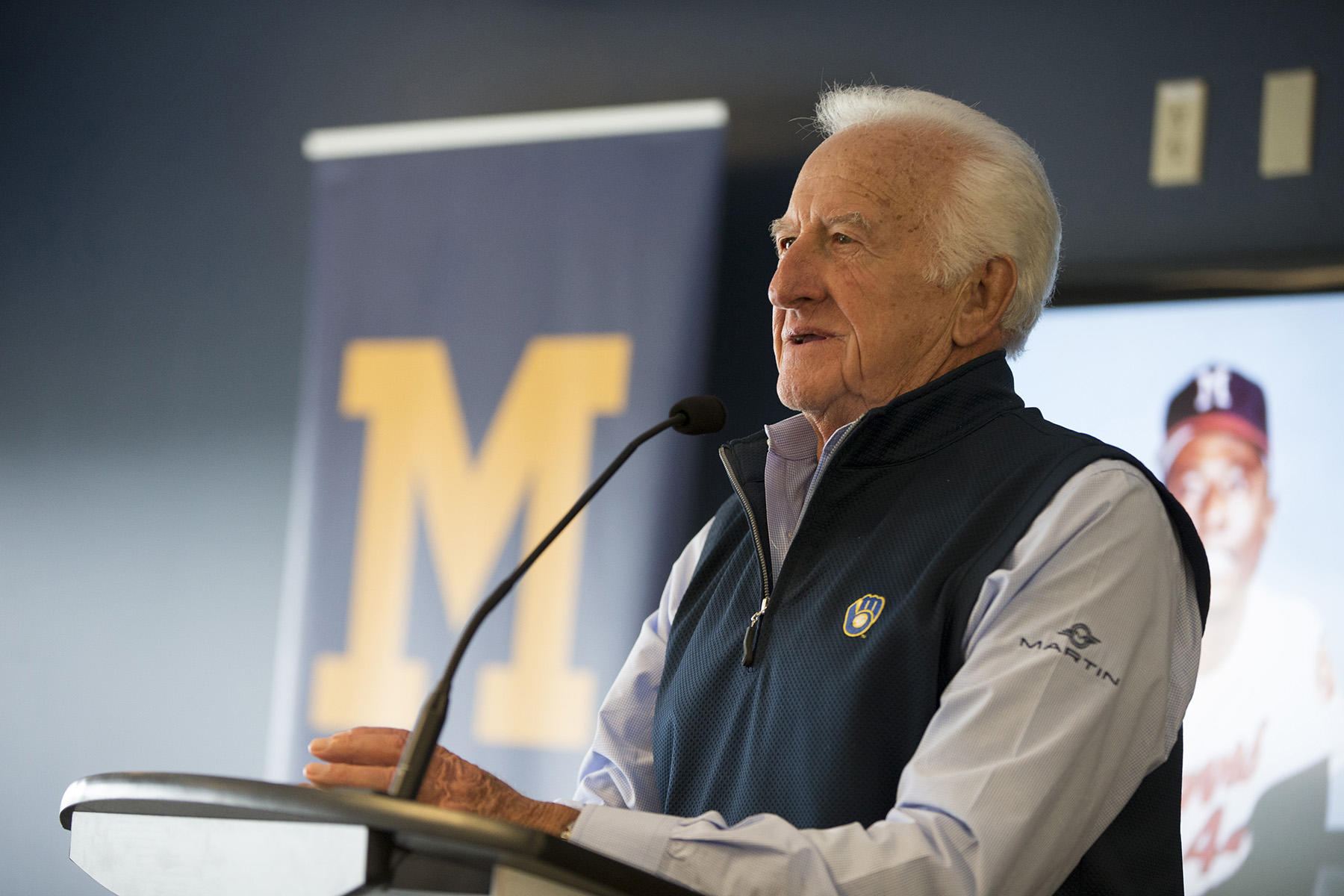 Bob Uecker has broadcast baseball for 52 seasons in Milwaukee. He also enjoyed a fine acting career. Bob did MLB on network TV and was a frequent guest of Johnny Carson. Still the voice of the Brewers, Bob will be 89 on January 26th.

We continue our discussion about baseball broadcasting with historian, Curt Smith, picking it up from last week.

The system by which TV assignments were made for the World Series changed drastically. MLB rights were shared between NBC and ABC the mid-1970s. It was a whole new world. Wasn’t it?

Before 1966, the Voice of each Series team did the play-by-play of “America’s greatest sports spectacle, the World Series,” said NBC, the Peacock Network airing its TV and much of its radio. Each Voice did 4 1/2 innings of every game. In 1966, NBC signed a new three-year contract, insisting that its baseball ball and striker, Curt Gowdy, air half of each set. Said NBC Sports head Carl Lindemann: “Buying exclusivity, we were going to showcase our network boy.” For the first time local-team mic men ferried only half of each game at home: say, Harry Caray in St. Louis and Ernie Harwell in Detroit. They would also air each road game on radio, heard by far fewer people.

In 1966, Gowdy televised half of each game, Vin Scully and Chuck Thompson doing the rest in Los Angeles and Baltimore, respectively. Lindemann said that telecasting only at Dodger Stadium bothered Vin. Despite doing network radio in Baltimore, he said, “What about TV? My [California] fans won’t be able to see me.” In Game One in L.A., Scully did the first 4 and 1/2 innings “wonderfully,” said Carl, “with Gowdy supplying color.” Curt then inherited a clunker made duller by Vin’s reticence to speak. “He just sat there for the last 4 and 1/2 innings.”

Later Keith Jackson became ABC’s Voice, succeeded by Al Michaels, who teamed with Tim McCarver, the latter able to clarify how a slider differs from a curve—and why Montgomery was slow after D-Day in taking Caen. Like Uecker, an ex-catcher, Tim could use the telling phrase, likening pitcher John Tudor to a surgeon: “The only difference is when he takes the heart out of a team, he doesn’t replace it.” Alas, ABC never overcame the stigma of not liking baseball. In 1990, starting four-year exclusivity, CBS replaced it and NBC before Fox arrived in 1996, for better or worse.

What are your thoughts of a three-person baseball booth today? Does it work or is a little overbearing?

In 1991, Jon Miller won his first Cable ACE Award for ESPN, self-deprecating in his acceptance. “I‘m an artiste, you know,” he laughed. Another Voice, Jack Buck, was a baseball and football artist, knowing how they differ—and the damage to baseball when that difference is ignored.

In football, plays diverge widely—thus, meriting analysis. By contrast, as Joe Garagiola said, “baseball is a simple game,” needing something else. Who pines to know how a cutter differs from a four-seam curve? Vin Scully minimized inside strategy. Mel Allen preferred story, too. The Reds’ Waite Hoyt once cut an LP Record, “The Best [Tales] of Waite Hoyt in the Rain,” once soloing on the National League’s first radio/TV simulcast. To quote from My Lair Lady, each would have “preferred a new edition of the Spanish Inquisition” to analytics’ dull, duller, dullest.

As noted, in 1976 ABC hired a trio to broadcast Monday Night Baseball: Bob Prince on play-by-play, Warner Wolf color, and Bob Uecker humor. It flopped, only Uke triumphing, a testament to his genius. The network’s Howard Costas once insisted that since Uecker was a simple ex-jock, he couldn’t  know what truculent meant. “Sure, I do, Howie,” Bob reasoned. “If you had a truck and I borrowed it, that would be a truck you lent.” In the end, what counts is chemistry: people relating to others.

It’s hard for three in the booth to thrive: too many cooks spouting too much irrelevance. An exception is Mets’ TV: Gary Cohen, Ron Darling, and Keith Hernandez tying honesty, knowledge, and humor. Chemistry usually comes in twos. Harry Kalas played “George Burns to Richie [Ashburn’s] Gracie Allen,” the Philadelphia Inquirer said of 1971-96. Ashburn said,  “You know, I did something [as a player] Babe Ruth never did.” Kalas: “What’s that?” Richie: “Hit a home run in Dodger Stadium.” Kalas: “Yeah, I guess that Babe Ruth wasn’t the player he was cracked up to be.”

In Pittsburgh, “We’d do play-by-play or tap dance [in 1958-69] ,” said Bob Prince, on the last out crying to Jim Woods, “Booze!” In 1974, Woods worked with Boston’s Ned Martin, through 1978 completing each other’s sentences, communing on-air “by a hand, gesture, a raised eyebrow,” said the Boston Globe. Jim called Ned “Nedley.” Martin kidded Woods about his time with Prince: “Did Budweiser sponsor you, or did you sponsor Budweiser?”

From 1971-88, Bill White—to partner Phil Rizzuto, always “White”—became the major leagues’ first black play-by-play man. One day the camera spotted a lovely belle. “White,” said Rizzuto, “she reminds me of the old song, ‘A Pretty Girl Is Like a Memory.’” Bill: “Ah, Scooter, I think that’s ‘melody.’” Phil: “Really? How do you know her name is Melody?”

Finally, in 1996-2010, Pat Hughes and ex-All-Star third baseman Ron Santo practiced chemistry with the Cubs. One night they stood as usual in the booth for the National Anthem, a heater above their heads. Prematurely bald, Ron got too near it, Pat smelling something burning. Santo’s hairpiece was on fire, “smoke billowing out the top of his head!” said Hughes, splashing water to douse it. Ron asked, “How does it look?” Pat, lying: “Not that bad,” a divot creasing Santo’s head. The Mets starting pitcher was—Al Leiter. The group Three Dog Night sang a tune, “One Is The Loneliest Number.” In the booth, two is usually baseball’s loveliest.

Lindsey Nelson once said something like, two men in a booth are sometimes one too many, and three men in a booth are sometimes several too many. I think everybody tried first to replicate what Gifford, Cosell, and Meredith had on Monday Night Football, and ABC certainly did with Prince, Wolf, and Uecker. Unfortunately, they didn’t let Prince be Prince, and he probably couldn’t have been on network TV anyway. Then Madden’s success led to the analyst taking the lead in other sports and as Buck said about his two years with McCarver, that isn’t how baseball works. It also… Read more »