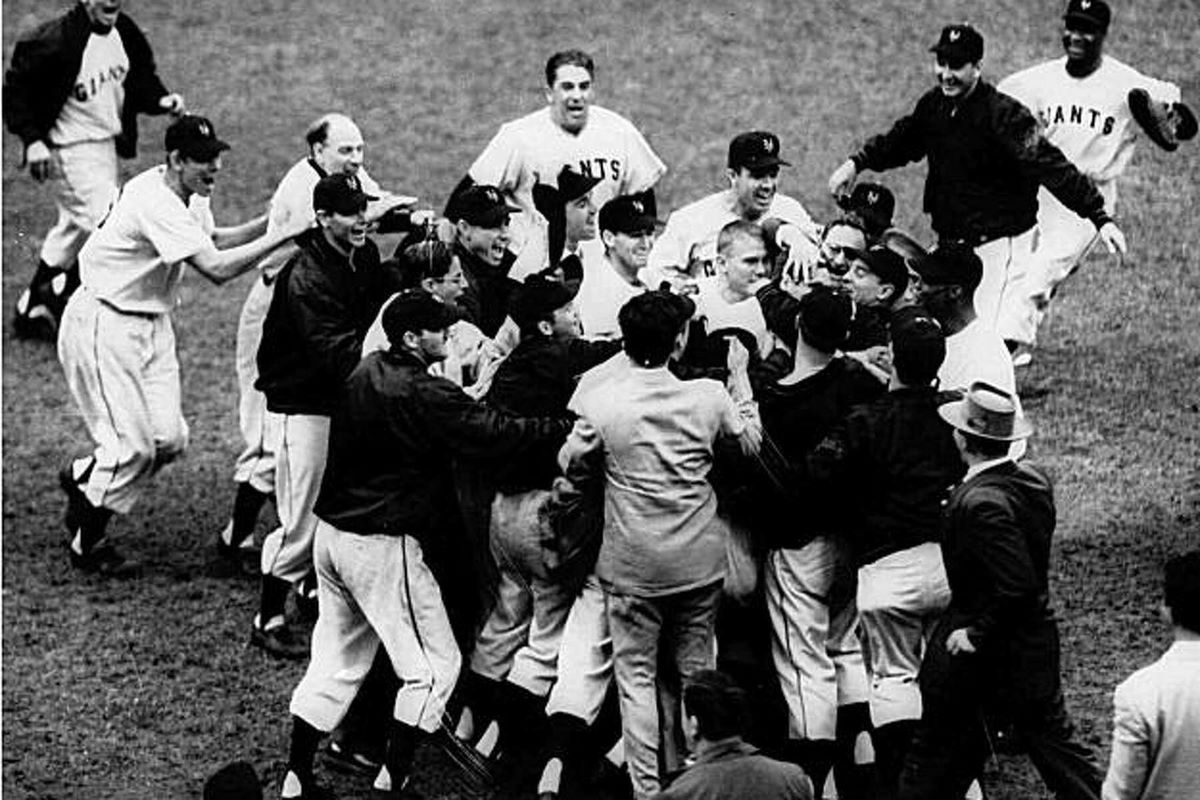 In 2021, the Giants won the NL West by a game over the Dodgers. Today we etch ‘Jints Voice Russ Hodges who called the two rivals’ greatest race, as our profiles of great broadcasters continue by Curt Smith: to USA Today, “the voice of authority in baseball broadcasting.”

People of a certain age know where they were when the Japanese attacked Pearl Harbor, Franklin Roosevelt died, and Bobby Thomson swung. “The most famous sports moment of all time,” Hall of Fame announcer Jon Miller terms Thomson’s October 3, 1951, pennant-winning blast. Let us play again Russ Hodges’ “The Shot Heard ’Round the World.”

At the time, Dodgers-Giants forged sport’s greatest rivalry, yearly playing 22 games against each other, radio and TV coursing through The City. America was the world’s post-war colossus, perhaps baseball never meaning more. What made the moment wonderwork was the Giants announcer’s call.

On August 13, Brooklyn led the National League by 13 and 1/2 games. By September 20 the Giants trailed by 6 with 7 left. On the last day, New York won in Boston, then trained back to Manhattan. In the noisy ’Jints train, Hodges, he later wrote, used the train telephone to call the team office monitoring Brooklyn’s game in Philadelphia. Catching a cold, he was forced to shout to relay play-by-play to players.

The Dodgers fell behind, 6-1, rallying to win, 9-8, in 14 innings. Next day the best-of-three NL playoff began: “a world,” said Russ, “focused on our rivalry.” Even the Voice of the American League Yankees was transfixed. “Think of it,” said Voice Mel Allen. “Three New York teams out of the big leagues’ 16 remain. One’s already in the Series [his], the other two tied.” For years a red-blooded American could recite the script by rote. It is easy to see why.

The NL playoff became the then most widely aired event in radio and nascent TV history. Seven networks, five of them radio, did at least one game: the Mutual and Liberty Broadcasting system(s) Game of the Day; Dodgers’ radio and Brooklyn Dodgers’ Re-created Network(s); Giants’ WMCA Radio; and CBS TV—the latter airing the first coast-to-coast network sports telecast, Hodges and ’Jints partner Ernie Harwell alternating balls and strikes on it and WMCA.

Only four years earlier Americans had owned 17,000 TV sets v. 58 million radios. By 1951 video had become an irresistible object. Radio was the immovable object, some feeling TV cursory. Such a schism towered as Russ and Ernie “tossed a coin [about a possible Game Three],” Harwell laughed. When Ernie got TV, he joked, “I felt sympathy for ‘Ole’ Russ. All these radio networks and I was gonna’ be on TV, and I thought that I had the plum assignment.” New York won the opener, 3-1. Next day changed place (the ‘Jints’ Polo Grounds) and outcome (Bums, 10-0). His plum then spoiled.

The Dodgers staggered to their Polo Grounds clubhouse. Confetti swirled like snow. “I don’t believe it! I don’t believe it! I do not believe it!” Russ resumed. “Bobby Thomson hit a line drive into the lower deck of the left-field stands, and the whole place is going crazy!”—Hodges eating noise thick enough to chew, the blast still baseball’s Rock of Ages call. The Giants were “picking Bobby Thomson up and carrying him off the field!” One writer said Hodges stood on his chair for two minutes screaming “The Giants win the pennant!” Brooklyn’s Red Barber dubbed him “unprofessional,” to which Russ’s later partner Lon Simmons said, “He was dramatic, but gave the essentials: score, meaning, who won.”
On CBS, Harwell never forgot saying instantly, “It’s gone!” then halting: Brooklyn’s Andy Pafko seemed glued to the left-field wall. “Uh, oh,” Ernie thought, “suppose he catches it.” Before videotape, a camera had to photograph a TV screen or monitor to record a TV program, a process called kinescope. Kinescopes were bulky, so CBS threw Harwell’s out. Even Russ’s call was saved only by a waiter, Lawrence Goldberg, taping the ninth inning on a then-rare reel-to-reel recorder. Myth dubs him a Dodgers fan, wanting to preserve their victory. In fact, Goldberg liked the Giants, Hodges using his borrowed copy to record a Christmas gift for friends.

“What did I get from TV?” Ernie later said of calling “The Shot.” “Anonymity!” What did Russ get from radio? “Immortality!”—an unlikely niche for the son of Rufus and Maud (Dodd) Hodges, born June 18, 1910, in Dayton, Tennessee. Russell Pleasant Hodges’s dad was a Southern Railroad telegrapher, moving his family almost every year. At 19, Russ, a University of Kentucky sophomore, broke an ankle playing football. He became a spotter, and said a “few words on air. I got the bug bad.” After law school at the University of Cincinnati, Russ passed the bar but never practiced: for Depression lawyers, supply topping demand.

In 1932, he got a job as a Kentucky hillbilly disc jockey, later re-creating the Reds, White Sox, and Cubs. By 1942, Hodges finally aired the Senators live, then in 1946 joined the Yankees as Allen’s aide. Aware of Russ’s law degree, his fellow counselor soon and Hodges soon “almost read each other’s mind.” In 1946, the Bombers began to air live each game and televise every set on the DuMont Network—both firsts. “We had one staff, not today’s three,” said Allen. “Russ and I’d go down a ladder, do several TV innings, then breathe.”

The Yank ad agency utilized their chemistry. “At inning’s end I’d ask something,” said Mel. “When next inning started, Russ’d answer. Love those spontaneous ad-libs.” Mel changed one question, Hodges giving a scripted answer. It made no sense, said Allen said, “which was the idea. Announcers then roomed together, Hodges finding Mel more Felix Under than Oscar Madison. Snuffy Stirnweiss once popped up a 3-1 game-ending pitch, stranding the tying run. At 4:30 A.M., Russ awoke to groans in the next bed, asking Mel if he should hail a doctor. No, Allen said, “I just can’t forget about that 3-1 pitch. Don’t you think he made a mistake swinging?”

In late 1948, Allen’s “all-time favorite” No. 2 joined the Giants. Hodges then contacted Bell’s palsy, paralyzing a side of his face. Recovering, he did NBC college football, the Kentucky Derby, and major fights. “I’m rather dull,” he mused. “I don’t believe in keeping the listeners on the edge of their seats.” Writer Wells Twombly said, “While Barber gave his listeners corn-fed philosophy and humor and Allen told you more about baseball than you cared to know, Hodges of the Giants told it the way it was,” The Sporting News naming him 1950 “Announcer of the Year.” Everest, of course, lay ahead.

Of  1951’s lost TV kinescope, said Ernie, “Only Mrs. Harwell and I know that I did maybe the most famous call of all time.” He didn’t care. The Giants got a then 15th pennant. The Dodgers earned ignominy. Clubhouses at the Polo Grounds were side-by-side back of deep center field. “We could hear the Giants whooping it up at their victory celebration. In ours it was like a morgue,” said Brooklyn mic man Vin Scully. In shock, Jackie Robinson and Pee Wee Reese lay on the rubbing table. Finally, Pee Wee raised his head, saying, “You know what I really don’t understand?” Jackie: “What?” Reese: “How after all these years playing baseball I haven’t gone insane.”

Hodges aired the World Series over NBC TV’s 64-affiliate network, including one in Mexico—a six-game Yanks’ triumph, incidental after “The Miracle of Coogan’s Bluff.” More alarmingly, the 1954 pennant-winning ’Jints drew just 1,155,067. “The Polo Grounds was fraying, people around it getting mugged,” said Russ. New York swept the Series over favored Cleveland, Russ saying of Willie Mays’s iconic Game One catch off Vic Wertz’s drive, “I don’t see how Willie did it, but he’s been doing it all year.”

Few then foresaw the Giants or Dodgers skipping town. The ’Jints needed only a new park to stay. The Brooks had yearly drawn a million since 1945. On May 28, 1957, the league OKd each team’s move to California. In August Giants owner Horace Stoneham said, “We’re sorry to disappoint the kids of New York, but we didn’t see many of their parents out there at the Polo Grounds in recent years.” On September 29, 11,606 mourners braved adieu. “Giants Bow to Bucs in Polo Grounds Finale,” said the Daily News. For Hodges, Moving Day had truly come.

Russ did NBC Radio’s second 1959 and first 1961 All-Star Game, the latter at the ’Jints’ new den, Candlestick Park. Next year the Dodgers again almost won the pennant. In the last week, Russ re-created LA at night on KSFO after doing the Giants live. On September 30, Mays’s last-day blast edged Houston, 2-1: “Tell it bye-bye baby! [Russ’s signature] Mays put one into orbit!” Russ then did Dodgers play-by-play at the Stick: “[Jim Gilliam] pops up to [Cardinals’ Julian] Javier! We have a playoff!” Ahead: another best-of-three.

In Game Three, a four-run ninth gave the ’Jints a 6-4 flag. The Series v. the Yanks marked Russ’s last network TV gig. In New York, Stoneham had televised each home game. Out West, he banned home video. “Everything was fine,” said Hodges, “then it wasn’t.” In 1968, the A’s moved to Oakland, splitting the region. Attendance plunged to 519,987. Finally, in 2000 the team opened sublime Pacific Bell Park. The 2010 Giants won a first Classic since 1954, Voice Jon Miller emceeing a City Hall salute to post-1957’s “whole panorama. Cried Jon: “Bye-bye baby!”

Russ had retired after the 1970 season, but The Shot lived longer, its call gracing TV’s M*A*S*H and film’s The Godfather. The chain-smoker died on April 19, 1971, at 60, of a heart attack, survived by wife Gay, son Pat, and daughter Judy. Mays wept: “Russ was like my big brother. I turned to him for everything.” In 1980, he posthumously received the Baseball Hall of Fame’s Ford C. Frick Award for “broadcast excellence.”

Hodges never equaled October 3, 1951, but no one else has, either. “[Clint] Hartung down the line at third base, not taking any chances,” he said before Branca’s final pitch. “[Whitey] Lockman with not too big of a lead at second, but he’ll be running like the wind if Thomson hits one.” Fate threw. Thomson hit one. Oh-oh! The Giants won the pennant.

Lovely piece … Well, I’m a Dodger fan, so not THAT lovely. 🙂 But apropos of lovely, when a Giant hits a home run, at the end of that inning, the Giants telecast always plays the Bye Bye Baby song, and Duane Kuiper (or Jon Miller or Dave Flemming) will refer to it, and often mention Hodges. And he’s been gone for more than half a century.