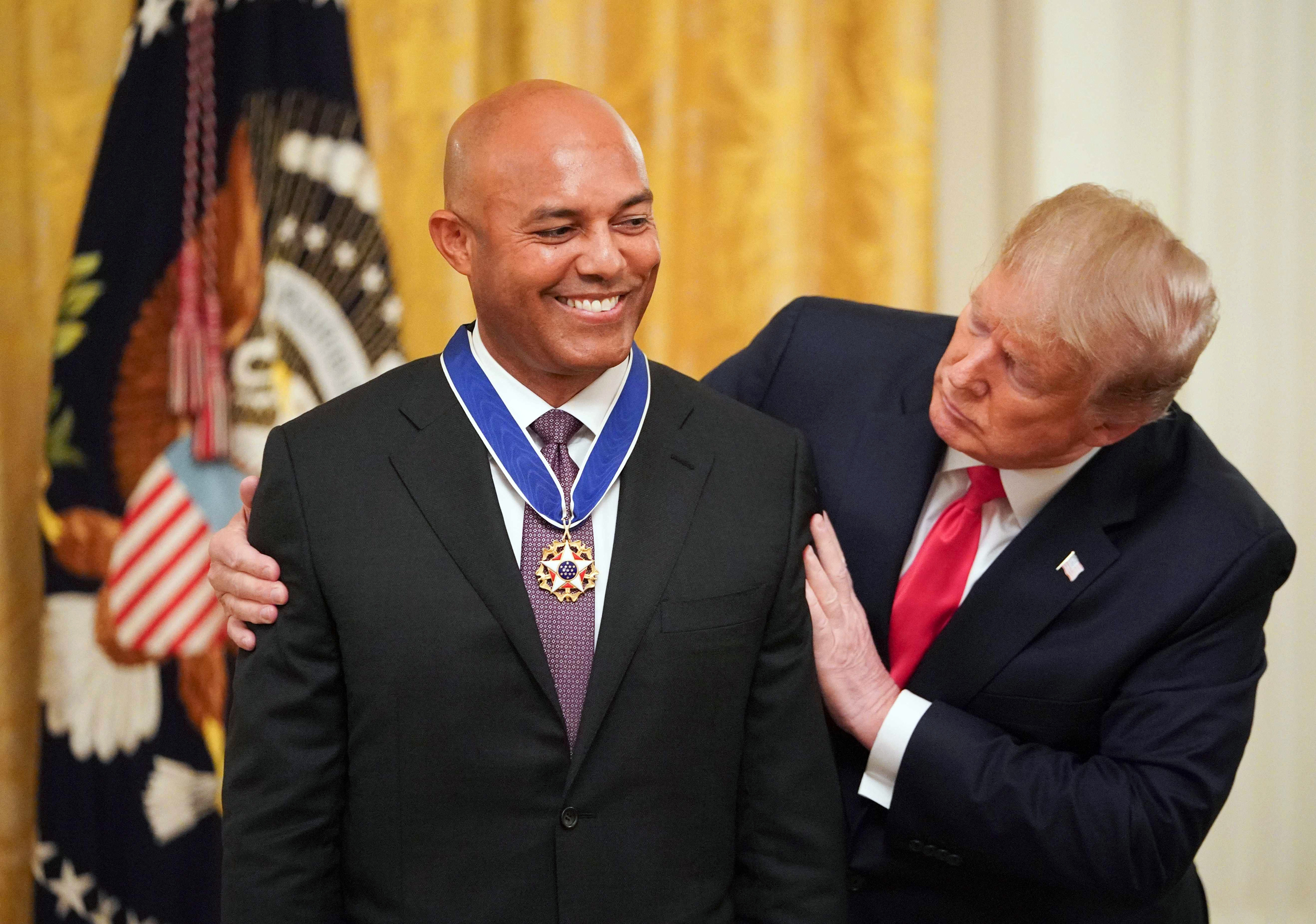 On January 20, 2017, Donald Trump became America’s 45th president—born June 14, 1946, the fourth of five upper-class children grew up in middle-class Jamaica in Queens, New York. His father was a developer and mother a housewife. “I build,” the president said, taking after Dad Fred. “It’s what I do.”

Among the many properties he built were Trump Tower and a Trump Hotel near the White House, an extremely partial list. They also included more than 20 golf courses, since Trump loves the sport. After Tiger Woods’ historic comeback, winning the 2019 Masters, Trump gave him the Presidential Medal of Freedom, America’s highest civilian award. Not always fluent, Trump was charming with his friend.

Less known is the president’s baseball boyhood, focused on the Yankees. New York won one 1950s World Series after another, acquired names like Reynolds, Lopat, and Maris, and had a front office that knew how to make a deal long before The Donald. “I was a very assertive, aggressive kid. I liked to test people,” Trump said of himself (and, coincidentally, the Yanks). His own conflict seemed inevitable. It happened when he went away to school.

Donald credits two people for creating a president. One, Dad, might oversee a work site, bargain with suppliers, and negotiate with builders in a day, an “unbelievably demanding taskmaster [who] would just pound and pound and pound.” The other man surfaced because, to friends, Trump had become a.k.a. “DT,” for “detention,” In 1959, at 13, he enrolled in the New York Military Academy, graduating in 1964 after learning self-discipline from Ted Dobias, academy sports coach and former army drill sergeant

When students misbehaved, Trump said, “Dobias smacked you and smacked you hard.” Some students fought back physically. Others shrank, earning his contempt. Trump respected him but refused to be cowed. It helped that baseball was his best sport and Dobias’s favorite.

the coach said. “I’d give him an eight and a half out of 10.” By ninth grade, Trump had become a model cadet. As a senior, he was cadet captain and star first baseman.

To Rolling Stone, Ted said that “We had . . . Phillies [and Red Sox scouts] to watch” what Trump modestly styled “the best baseball player in New York when I was young”—him.  Former classmate Ted Levine agreed in Business Insider: “He could do anything he wanted.” The two clubs wanted him to delay college to play ball. Donald declined, wanting to make “real money” and knowing that “in those days you couldn’t even make any money being a great player.” Too bad. It would have been a show.

Trump resembled Pete Rose via Dustin Pedroia by way of Enos Slaughter—as The Washington Post wrote, “his uniform … often the dirtiest on the field.” Added MSNBC: “Even as a catcher, he was unbothered by balls to the face.” Schoolmate Nicholas Kass said, “If he had hit the ball to right, he could’ve had a home run because no one was there. But he always wanted to hit the ball through people. He wanted to overpower them.”

All the traits that in 2016 made Trump loved or loathed loomed early: defiance, work, courage, rage. So did his love of ball. In sixth grade he wrote a poem, published in his yearbook:

so loud and noisy to my ears.

And when they get another run, I feel like I could die.

Then the catcher makes an error,

The game is over and we say

tomorrow is another day.

After the Academy, he studied in 1965-66 at Fordham University and then the Wharton School. In 1968, Trump graduated with a BS degree in economics, working concurrently at the family real estate firm, then spending the last five decades mixing brass, guile, intelligence, a sizable inherited sum, and a larger fortune into a unique niche as TV personality, prolific builder, boffo marketer, and—dare we say—leader of the free world.

By 2017, 268 of the 515 businesses with which Trump was associated bore his name. (One with which he wasn’t, the United States Football League New Jersey Generals, which Trump owned, had folded with the league in 1986.) That year his brand was valued at $3.3 billion, profiting from NBC-TV’s The Apprentice, of which Trump was 2003-15 host and executive producer. Declaring for president, he then forged in 2016 perhaps America’s most spectacular political upset ever, upholding the Forgotten America—and gaining the animus of every institution in the republic.

As president, Trump has skipped the capital’s traditional Opening Day first pitch at Nationals Park, citing a scheduling conflict. Others suggest another possibility: the crowd in the overwhelmingly Democratic city would boo. As a result, sallies by the baseball-loving Trump to toss the first pitch at Fenway Park, Wrigley Field, and Yankee Stadium before becoming president have gone unmentioned. That Fake News is Trump’s fault.

This spring the president hailed the Red Sox 2018 World Series team by inviting it to the White House. Sadly, 12 of Boston’s 25-man roster snubbed the ceremony. Mr. President, grab your glove, go to the park, throw out next year’s first pitch, and show that you’re bigger than your critics. It might do you a world of good.

Yeah, but it didn’t hurt the Yankees’ dealmaking that they had their own minor league franchise in the league at the time, the Kansas City A’s!