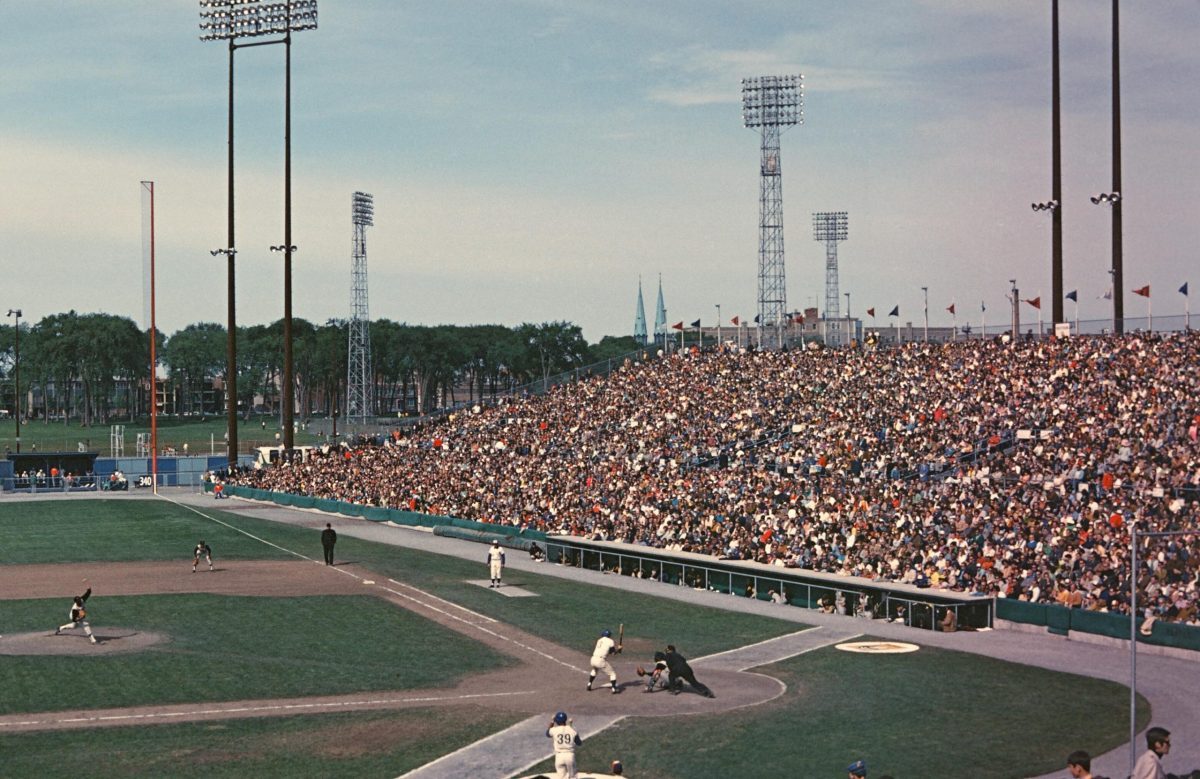 It is striking how many broadcasters of the four major sports—baseball, basketball, football, and hockey—dub the National Pastime the hardest yet most rewarding to announce. Baseball is the hardest because so often little happens on the field. It is most rewarding for that reason—as Al Michaels has said, “Only baseball’s pace reveals your personality.” To many, in baseball the Voices of the Game are frequently the game.

This explains why, without dismissing other games, the most prestigious individual radio/TV sports honor is arguably the Ford C. Frick Award yearly given by the National Baseball Hall of Fame and Museum to a broadcaster for “major contributions to baseball”—in sum, for painting its sound, look, and feel.

Named after the late announcer, 1934-51 National League president, and 1951-65 baseball commissioner, the Frick Award has been given annually since 1978. Forty-six Voices have received it: one yearly save Mel Allen and Red Barber, both honored that first year because, to be honest, the Hall committee couldn’t make up its mind.

Recently, a change was announced in how Frick honorees are chosen. In 2023-26, each year will feature a composite ballot of local and national voices active now or at some point since 1994, unlike the current system limited to a particular era or category. In 2027, only announcers whose career concluded prior to the 1994- Wild Card Era will be eligible.

The new system makes it easier for household names to make the 10-name ballot, up from the current eight, further fueling the award’s cachet. Below, this year’s finalists: a cursory sketch of each’s career, listed alphabetically.

DAVE CAMPBELL, a.k.a. “Soups,” after the Campbell’s brand, played at the University of Michigan, signed with Detroit in 1964, moved 42 times in seven years in the minors, and played for some time for 1967-74 Detroit, San Diego, St. Louis, and Houston. Dave then called the Giants, Padres, and Rockies, also ESPN TV’s Baseball Tonight, SportsCenter, Major League Baseball, and Triple-A World Series, and its radio Sunday Night Baseball. Campbell created the board game Extra Bases and did voice over for the PlayStation portable game series MLB: The Show. Hail from the Chief: A regular viewer of Dave’s Baseball Tonight was 2001-09 President George W. Bush, terming it “my favorite show.”

JOE CASTIGLIONE, as a child weaned on the Yankees’ Mel Allen in Red Sox New England, visited Fenway Park in 1967 and converted. The Colgate and Syracuse graduate called the Indians and Brewers, joined the Sox 1983, and in 2004 wrote a book, Broadcast Rites and Sites. That fall he aired Boston’s Series sweep of St. Louis, immortalizing, “Can you believe it?” of its first post-1918 title. It became Joe’s trademark (also title of his second book). In 2015, he broke Ned Martin’s record of 32 straight years on Red Sox radio and/or TV, “wafting softly through New England summers,” wrote David J. Halberstam: a perfect antidote for the region’s fear that the sky was always falling. In 2022, club named Fenway’s radio booth in his honor.

GARY COHEN, visiting Shea Stadium as a boy, learned Metsomania from his Dad. He made the Dean’s List at Columbia, did the Spartanburg Spinners, Durham Bulls, and Pawtucket Red Sox, and joined the Amazins’ WFAN Radio and SNY and WPIX TV in 1989 and 2006, respectively. Cohen has aired St. John’s and Seton Hall hoops, CBS Radio baseball Game of the Week, CBS and ESPN postseason, and three Winter Olympics. Casey Stengel said, “Can’t anybody play this here game?” Few ask if he can describe it, Gary saying of baseball broadcasting, “It has to be a life-long pursuit, growing up on baseball’s language and history, watching it on TV,” and that reading forms its core. “Without reading you can’t write, let alone learn to speak.”

JERRY HOWARTH grew up in San Francisco, graduated from Santa Clara ‘68, and spent a decade calling baseball, including the Angels’ Triple-A Salt Lake club. Once Dick Enberg welcomed him to his bigs booth. After the game, Jerry had a guard reopen the gate and sat in Dick’s chair, thinking, “I can do this,” and did. In 1981, the Blue Jays hired him, Howarth airing the 1992-93 titlist from the Maritimes to Manitoba. In 1992, he etched the Series-winning Game Six extra-inning safety: “A hit down the line. [Devon] White scores! . . . [Roberto] Alomar scores on Dave Winfield’s two-base hit!” Partner Tom Cheek’s 2005 death ended the grand Tom and Jerry Show, making Jerry Canadian baseball’s Voice. He retired due to health in early 2018.

PAT HUGHES snuck as a teenager into Candlestick Park’s visiting clubhouse, meeting Billy Williams, Ron Santo, and Ernie Banks. Their comity augured his Cubs career. In 1996, Pat arrived at WGN Radio after 14 years as Bob Uecker’s Brewers partner. Two years later he etched Sammy Sosa ‘s and Mark McGwire’s Great Race. “McGwire drives one to deep left—this could be!—it’s a home run!” Hughes said. “Number 62 for Mark McGwire! A slice of history and a magical moment in St. Louis.” In 2016, he announced the Wrigleys’ first title in 108 years: “The Cubs have done it!. . . And let the celebration began!” Next day he emceed a gigantic downtown rally. Pat is the author of numerous books and creator/host of the grand CD series, “Baseball Voices.”

ERNIE JOHNSON SR. became cable TV’s first star: son of Swedish immigrants, World War II Marine, 1950 and 1952-59 Braves/Orioles pitcher, and 1962-89 and 1993-96 Milwaukee/Atlanta mic man. In 1976, he replaced lead Braves Voice Milo Hamilton, invoking pops “that bring rain” and “give that one a blue star.” WTBS Atlanta soon became a SuperStation, bulging baseball’s and cable’s clientele: to many, nightly baseball coast-to-coast  better than an open bar. In 1993-95, dad, a master storyteller, and son Ernie Jr. telecast the Braves on local TV cable, Sr.’s frequent signoff “and on this winning night, so long everybody.” Ernie died in 2011 at 87, a letter-writer saying, “When you heard Ernie Johnson, it was like summertime would never end.”

DUANE KUIPER made the bigs via Centerville Junior College, Southern Illinois University, 1972 draft for the 1974-81 Indians, then 1982-85 Giants. Retiring as a player, he did KNBR Radio San Francisco commentary, in 1993 became first-year Rockies Voice, and next year returned to the Giants with ex-teammate Mike Krukow on color. MLB Network’s Matt Vasgersian said, “I could say Krukow and Kuiper work Giants games, except it doesn’t seem like work.” In 2010, Duane proclaimed, “The Giants, for the first time in 52 [sic 56] years . . . are world champions! You can’t help but think that this group is celebrating for the Say Hey Kid, for Will the Thrill [Clark], celebrating for No. 25 [Barry Bonds], and celebrating for all you Giants fans!”

STEVE STONE graduated from Kent State in 1970, Thurman Munson his catcher. He pitched for four 1971-81 teams, taking the 1980 A.L. Cy Young Award. Stone did color with Harry Caray in 1983-97 and grandson Chip in 1998-2000 and 2003-04, Harry teaching “you have to know when the game can speak for itself [squeaker] and when you have to speak for the game [sleeper].” For Stone, the Cubs’ 2003 LCS v. Florida turned unspeakable, spectator Steve Bartman stealing a fly ball from outfielder Moises Alou to help the Cubs lose the series. “I can’t believe a fan would do that!” fumed Steve, who has analyzed White Sox radio, now TV, since 2005, his resume listing ESPN, TBS, ABC’s Monday Night Baseball, and two books, including Where’s Harry?

The 2003 Frick Award, to be disclosed December 7, will reveal the choice of the 12 living Frick recipients and three broadcast historians and columnists, including this writer, based on such criteria as a candidate’s “commitment to excellence, quality of broadcasting abilities, reverence within the game, popularity with fans, and recognition by peers.” For the first time, each ballot must include at least one foreign-language Voice. Finally, each finalist boasts a minimum of 10 years of continuous big-league radio and/or TV with a club, network, or both. Let the voting begin.

I do NOT envy Mr. Smith, Mr. Halberstam, and their fellow voters. This is a tough ballot. I have a favorite–don’t we all?–and I’m not giving it away when I mention Gary Cohen. Before his first official Mets broadcast in 1989, he did an interview and talked about having gone to Columbia, which I was attending then for grad school. He said that doing Columbia sports was great preparation because anything could happen, such as the time the kickoff ended up BEHIND the kicker. And I thought, he’s joining the booth occupied by Bob Murphy, next door to Ralph Kiner,… Read more »