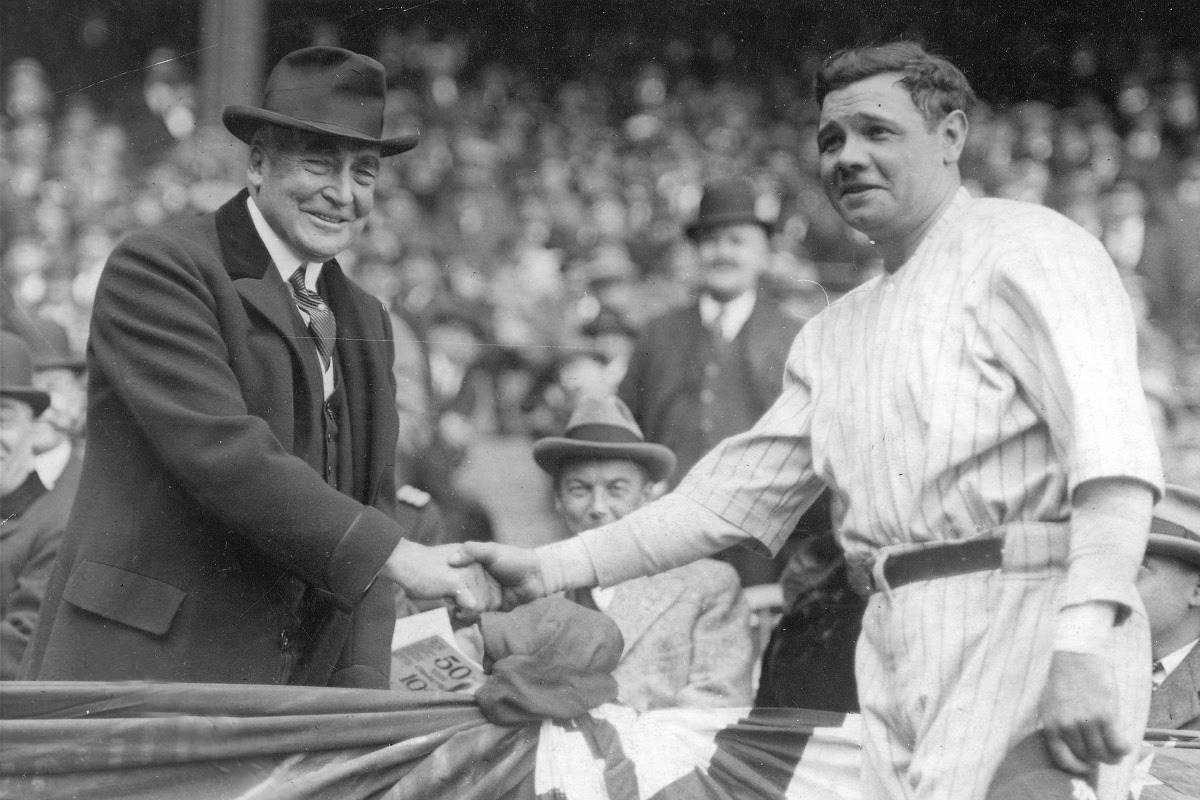 The 29th president and baseball's greatest ever player

Franklin Delano Roosevelt is known as America’s first radio president. In fact, he was first to master radio. The first to use it as president was Warren Gamaliel Harding. Radio debuted November 2, 1920, on election night, over then-100-watt KDKA Pittsburgh, Republican Harding winning a landslide over Democrat James M. Cox, whose running mate was—FDR!

Alice Roosevelt Longworth said, “Harding was not a bad man. He was just a slob.” Others felt him ready for Mt. Rushmore—fine chin, full hair, seeming gravitas. Either way, Harding give the first speech heard on radio—June 14, 1922 at the dedication of the Francis Scott Key Memorial. A decade later 60 million heard FDR. No newspaper could compete. The irony was that Harding was a newspaper man.

Born in 1865, he soon moved to Marion, Ohio, where Harding worked on his father’s small weekly, later raised $300 to help buy and publish the failing Marion Star, and developed a keen baseball eye. In his 20s, he owned part of Marion’s town team, the Diggers, in the Ohio State League. The ex officio scout tapped two players who became major-league regulars: Wilbur Cooper and Jake Daubert. Warren Spahn was even named in his honor, a pitcher with such a great pickoff move that he was said to have once picked a runner off first base—and the batter swung.

Harding loved to golf and talk sports anywhere, anytime. In his 1920 “front porch” campaign, the GOP nominee welcomed guests to Marion. Finally, he met Brooklyn baseball writer Thomas S. Rice, who put Warren at ease—and considerably behind schedule. Not wishing to impose, Rice excused himself and prepared to leave—but Harding said no. Recently, Babe Ruth had been sold by the Red Sox to the Yankees. Dialogue turned to his mammoth bat and massive girth.

Like Ruth’s, Harding’s baseball sense was more intuitive than intellectual. Other aspects were also similar. Both were relatively unschooled. Babe drank at any time available. Harding relished hosting him, swigging bourbon in the White House when the Yankees played in Washington. Both were careless about ethics, Harding’s fatal flaw. Yet his baseball knowledge made even a routine conversation about it caring.

Babe had entered the big leagues seven years before Harding’s 1921 inaugural. Graham McNamee debuted in 1923, airing his first of 13 straight Series on NBC Radio. “How do you do, ladies and gentlemen of the radio audience?” he began, closing, “This is Graham McNamee speaking. Good night, all.” Each man seemed a storybook figure—for Harding, like most of 1920s America, the small town a compass. At this moment, each seemed to etch the American Dream.

In 1920 Harding, a U.S. Senator, had been a long shot to become president. Then, in May, he gave a speech urging “not nostrums, but normalcy.” A phrase pivoted the campaign, “Return to Normalcy.” Party bosses caucused in a Chicago hotel’s “smoke-filled room” and made him nominee. Triumphal, he appointed an all-star cabinet and cut taxes, but in 1923 sold the Marion Star. Heart tissue weak, Harding began a cross-country “voyage of understanding,” on July 26 spoke to 50,000 in Vancouver, then began to golf. Exhausted, the president played only six holes, rested, then played holes 17-18 to create an image of a completed round.

Next day in Seattle, Harding rushed his speech, then sped to San Francisco. On August 2 he began to twist convulsively, collapsed, and soon lay in a casket in a train to dc for services, 9 million people lining the tracks, shocked by Harding’s death of a cerebral hemorrhage. He was taken to Marion for burial, among the more beloved presidents since Lincoln. Pitcher Walter Johnson evoked his son playing a year earlier in front of the Washington dugout. Harding called the boy over, put him on his lap, spoke to him for the first inning, and said, “This is a mighty fine boy you have here.”

For a time, many recalled his “front-porch” campaign and vow, apparently kept, to retrieve normalcy. Then his private conduct emerged, which death cheated him of a chance to publicly explain. In office, he had opposed the use of alcohol in Prohibition even as booze rinsed the Oval Office. As hypocritical was the Teapot Dome scandal, of which the nation had been forgiving until dishonor stained Harding’s name.

Worst for his constituency, which trusted Harding to defend culture and convention, other revelations showed hypocrisy. In 1927 Nan Britton of Marion published a best-selling book The President’s Daughter, alleging that Harding had fathered her child. In 2015, DNA tests confirmed. On one hand, it could be said that his successor morally restored the presidency. On the other, as our series will next show, to quote a Washington hostess, Calvin Coolidge looked “like he had been weaned on a pickle.”

Great piece. Harding had some other baseball connections, discussed in Jerome Holtzman’s wonderful No Cheering in the Press Box, including that his caddy one day was a teen named Shirley Povich, who went on to some deserved renown as a wonderful sportswriter.

Interestingly, one of the CD’s that Ted Patterson put together has a recording of Harold Arlin, the first ever to broadcast a major league game, giving the results of the 1920 election on KDKA.