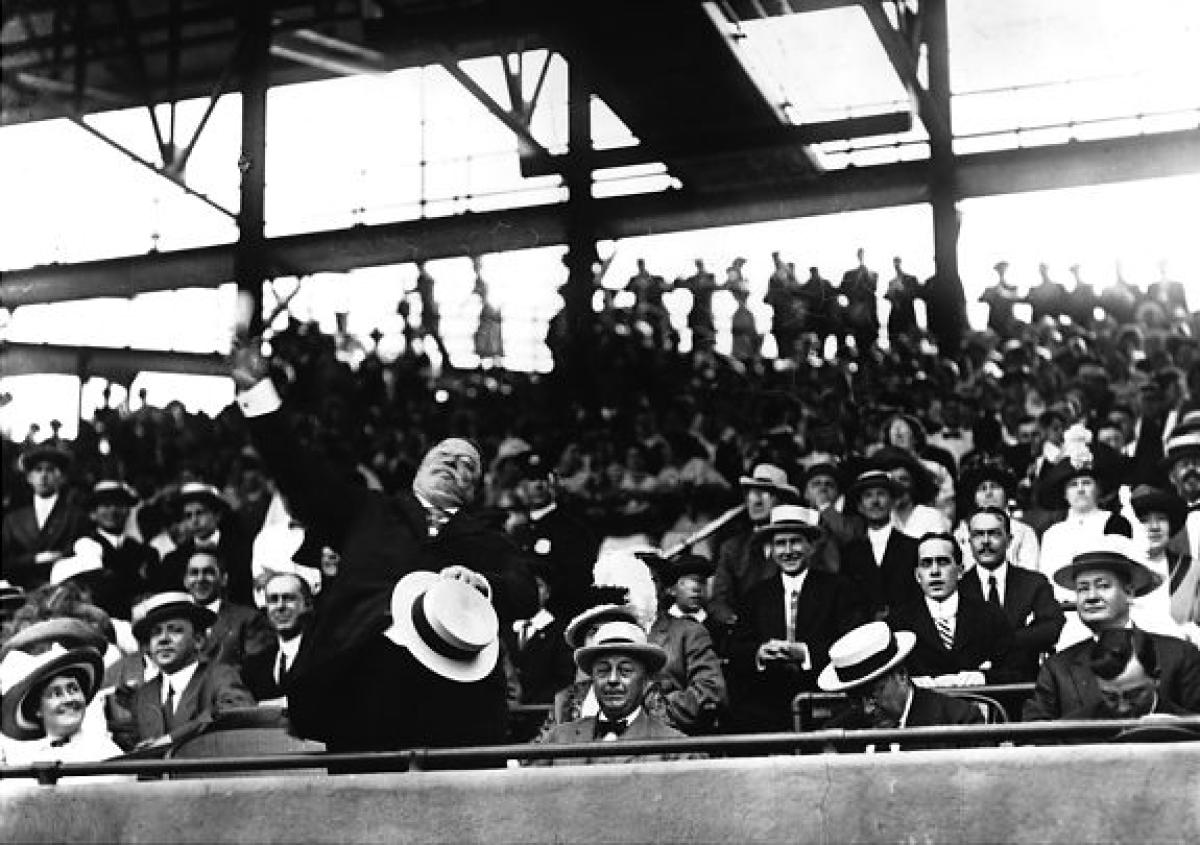 Becoming president in 1901, Theodore Roosevelt extolled “the strenuous life.” It did not include baseball. Succeeding TR in 1909, William Howard Taft deemed the strenuous life akin to leprosy. To him, baseball virtually meant life.

Bed-bound as a child, Roosevelt “was nervous and timid,” he said, “but I felt a great admiration for men who were fearless and who could hold their own in the world.” In time, he held his own. Teddy—a name he hated—found that physical exercise could build his body, curb asthma, and keep bullies from the door. Boyhood began a life-long passion for rowing, hiking, horseback riding, and boxing (middle weight). Roosevelt boomed, “I believe in rough games and in rough and manly sports.”

As TR, Roosevelt boxed until a young Army officer hit him so hard that he lost most sight in his left eye. He still enjoyed watching football: indeed, spurred rule changes, including four downs, not three, and a legalized forward pass, that may have saved it by slashing on-field deaths. Yet it remained violent, which TR loved. Daughter Alice Roosevelt Longworth jabbed: “[Even] tennis, lacrosse, boxing, polo are violent, which appealed to us. But baseball? Father wouldn’t watch it, not even at Harvard!” To Roosevelt, baseball was “molly-coddle.” He thought it dull—but couldn’t say so. How could a baseball-hating president brave a baseball-loving land? Lauding it, he didn’t mean a word.

TR had rejoiced on election night 1908, thinking Taft a protégé. He soon found him a mossback. At Yale, Taft had joined the wrestling team against his father’s wishes, becoming its first heavyweight intramural wresting titlist. Sadly, he lacked skill at political infighting, one reporter saying, “You are no Teddy!” At first, Taft was popular, in 1909 watching his first big-league game: Red Sox 8, Senators 4. Envision the fictive Reginald Van Gleason III from television’s 1960s’ Jackie Gleason Show—top hat, tails, mustache, graceful as a gazelle, 300 pounds. That was Taft. “One loves him at first sight,” said Roosevelt, the Washington Post noting “great applause as the crowd recognized the President.” Whatever else he was, Taft was hard to miss.

Next year began a rite that ran through baseball’s 1971 exit to Texas and since its 2005 return to dc—the president’s Opening Day “official pitch” before the home team takes the field: Taft rising from a specially made large box seat for a wobbler that pitcher Walter Johnson barely caught. Papers show Taft in his ample glory: mugging, winding up, not grasping why some treat baseball like a bar exam. He signed Johnson’s baseball, “with the hope that he may continue to be as formidable as in yesterday’s game.” A formidable presidential rite had itself been born.

That May 4 in St. Louis, Taft set another first, seeing a same-day game in each Major League: Reds-Cardinals at National League Park, then Cleveland’s Cy Young v. the Browns at Sportsman’s Park. Whenever Detroit visited Washington, another Hall of Famer, Ty Cobb, visited the Oval Office, the mansion a bullhorn for his sport. On March 17, 1911, Taft needed a fire hose for a different house when the Senators’ wooden stands caught fire and burned to the ground. On Opening Day, 16,000 filled a steel and concrete grandstand at the same site ultimately a.k.a. Griffith Stadium. Like each classic park built into the 1950s, it differed from every other, most rising from an urban grid.

Taft was unhorsed as president in 1912, third-party candidate TR splitting the GOP vote, and died in 1930. Most presidents can be judged more fairly after leaving office, as if retrospect lessens bile. Taft’s reappraisal involved baseball. In 1962, The Sporting News (tsn) headlined: taft rated top fan among presidents. He liked trading stories at the park, he said, “because I enjoy it and because I thought my presence as a temporary chief magistrate”—in 1921-30, becoming the only president to be a Supreme Court chief justice—might spur baseball participation and lift “a city’s mental and physical state.”

Proof of his tsn “top fan” status was a September 16, 1909, visit to Chicago. A photo shows a scorecard in Taft’s right hand and cigar in left, the latter used to gesture: the president is seen shouting toward the field. A caption explained: “When the committee in charge of arrangements for his entertainment during his visit of last week wired him for suggestions, [Taft] insisted on seeing the game of September 16 between the Cubs and Giants.” The headline, real rooter in white house! tells why many fondly remember him.

Today each game at Washington’s Nationals Park presents “The Presidential,” a race between halves of an inning by 12-foot mascots of historic U.S. presidents. Since the race’s 2006 start, mascots of Washington, Jefferson, Lincoln, Theodore Roosevelt, Coolidge, and Hoover have vied. In 2013 Taft joined them, given his historic first-pitch niche. Sadly, his running gait has usually kept Taft from winning, often like the Senators of old.