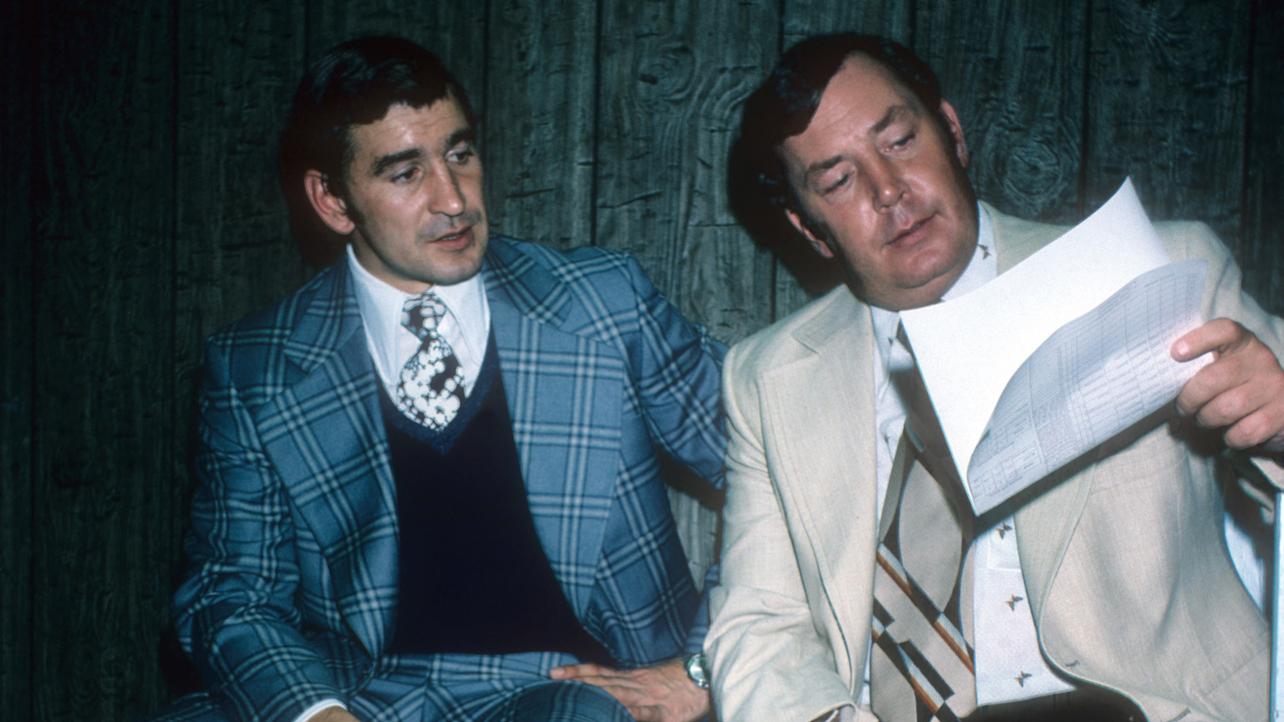 In the summer of 1969, America put a man on the moon and in the fall, the Mets won a World Series. The rhetorical question that followed brought a smile to many. Which of the two accomplishments was more miraculous?

These were difficult times in America. Students were rebelling on campuses, the war in Vietnam was raging and the country had suffered deadly riots on the streets of Los Angeles, Detroit, Newark and elsewhere. In times of strife and chaos, sports have historically been a palliative diversion. Heading into the 70s, the country needed something around which to rally.

More televised sports was hardly the panacea but it couldn’t hurt. And what followed in the decade was a bonanza, an explosive growth of network sports programming. In the spring of 1970, the NBA in its 24th season, finally got its due. For the first time, the league’s entire championship series was carried by network television, on ABC. It happened to be the Knicks and the Lakers, representing two of the top three markets at the time. By a television measure, the NFL proved itself in the 60s and would continue to gallop ahead of baseball for fan interest. That fall, football hit the television jackpot. Commissioner Peter Rozelle and ABC Sports boss Roone Arledge  introduced Monday Night Football, the first ever primetime play-by-play package.

In October ‘70, the World Series featured two smaller market teams, Baltimore and Cincinnati. All games were played during the day, yet people watched. A year later, MLB would experiment, scheduling one of its World Series games under the lights, during primetime.

But the National Hockey League lagged and sputtered for visibility through the 70s and beyond. Forever, the sport was deemed as television unfriendly, a game difficult to follow, exacerbated by the correct assumption that it was foreign to many. The fact is that it had only limited regional interest. Until 1967, there were six NHL teams, two in Canada and none of the American four was west of Chicago.

It was then, the 1967-68 season, that the league made a bold decision to double its number of franchises, from the original six to twelve. Television took some note. By 1969, with teams in major markets like Philadelphia and Los Angeles, the NHL was showing up a bit more on sports’ radar screens, hardly in any prominent way but at least noticeably.

A limited schedule of games was on CBS and drew some attention. This was before cable television and Crackberries. In those years, when a game was on the Tiffany Network, it mattered. Mind you, it was hardly Hockey Night in Canada, a Saturday national institution, but it beat a kick in the behind.

NBC’s Curt Gowdy was the biggest name in network play-by-play. The Cowboy at the Mike did Super Bowls, Rose Bowls, Final Fours and World Series. Keith Jackson was coming to the fore on ABC and the minimalist Ray Scott was associated with CBS football. When hockey on network television began to develop some persona, the cynosure was Dan Kelly. He modulated his gripping baritone in lockstep with the frenetic action. He paused perfectly, rhythmically paralleling the game’s drama. Kelly was galvanizing. Unlike basketball, where each trip down the floor is generally an orderly paragraph in a prescribed chapter, hockey can have run-ons and unexpected spurts. It’s a tougher game to call on either television or radio.

By the spring of 1969, Kelly began a  string of  16 years when he broadcast the Stanley Cup on either American or Canadian television. Unfortunately, Kelly died way too young at age 52 in 1989. Had he lived to a more reasonable age, it could have taken Doc Emrick a lot longer to surface.

In those years, when CBS or NBC had the rights, only a limited number of  games in the Cup finals were carried. During the NBC years, Kelly worked the playoffs for Canadian television while the talented Tim Ryan was behind the peacock microphones.

If Marv Albert eventually became the unofficial voice of the NBA, Kelly earned a similar moniker announcing the NHL. They shared similar familial ties too. As Sly and the Family Stone said in song in 1971, it was a Family Affair. Brother Hal Kelly did hockey in Canada and sons, John and Dan would become career NHL voices too. Marv’s two brothers Al and Steve, now retired, broadcast sports, and son Kenny is still a peripatetic announcer.

John actually is the television voice of the Blues and says he’s inspired by his dad each time he takes his broadcast position at Enterprise Center. There’s a visible banner there that honors Dan for his 21 seasons calling the club’s games. For John, who was 28 when his dad passed, it stokes memories of greatness.

Dan Kelly presented a less graphic call when shuffling from radio to television. He let viewers absorb what they were seeing, captioning the screen by economizing his words. Emrick honed his skills doing radio in the minors and his wordy description isn’t moderated much on television.  When I asked Doc why, he simply said, “It’s the way I’ve always done it.” No question, Emrick’s style has worked for him.

Doc Emrick is poetic, bright, passionate and gifted. But the NHL on television didn’t begin with him. To say today that Kelly might have been better than Doc might sound blasphemous. Not so though if you pose the question on social media.  Choose five nominees, Emrick, Kelly, Ryan, Gary Thorne and Steve Levy and fans vary how they stack ’em up. Like tastes of food, there’s nothing unanimous.

I catalog Keith Olbermann’s fluency and oratory command with Costas, Scully and Cosell. He’s a big hockey follower and I asked him for his view.

What made Dan Kelly special?

Dan somehow sustained both pace and intensity, exploding into the booming ‘with a drive!’ or ‘he shoots, he scores!’ without wearing you out. I heard him first when I was about ten and heard that magical quality of making you feel something was about to happen that would be so exciting that if you missed it you would regret it for the rest of your natural life.

Doc is deserving of all his accolades. But his baseline is far more sedate than Dan’s was. There’s nothing wrong with this, because if you try for Kelly’s level of elevated anticipation, and either your disposition or your voice makes it sound forced, it’ll be a tough listen.

How about the audience the two served?

Doc, I think, is for people who love the game. Dan Kelly served them just as well but he also managed to convey to newcomers ‘THIS IS THE NATIONAL HOCKEY LEAGUE AND IT IS RELENTLESSLY THRILLING. HOLD ON TO YOUR HAT!

NBC has Doc, Eddie Olczyk and Pierre McGuire. How do you feel about a three man broadcast team?

I’m not a fan of the three-man hockey unit. Last time they were here (New York) I actually sat in with the best in the game, my friend John Shorthouse of the Canucks, for a period. Between his work and his color man John Garrett, I felt justified in coming in about three times in the entire period (and once was to do a lighthearted read of a promo). Anything more is disrespectful to the broadcast. The third men could all vanish tomorrow and it would be several seasons before viewers noticed.

I didn’t get to hear Dan Kelly in the earlier days, but I heard him do some work for CBS in the late 1970s–I think it was when Dick Stockton did the CBS Sports Spectacular and they showed a playoff game or two. But I remember that voice and that knowledge. In honor of Lindsey Nelson’s recent centenary, remember his line that two analysts are often one too many and three men in a booth are often several too many. I think the other guys are great, but, in all honesty, the only reason Doc needs a partner is so… Read more »

I remember when the USA Network carried the NHL and got a chance to hear Dan Kelly call the games and he was absolutely enjoyable to listen to. A great voice and perfect timing with his words to describe the action we were watching.
Living in Southern California for hockey it was Bob Miller of the Kings, so listening to Kelly was a bonus.

I first got to hear Bob Miller when he worked with Dan Avey in the 1970s and our station in Las Vegas carried their telecasts. When I was in New York for grad school I got to hear Marv Albert do Rangers radio, and he was an absolutely incredible hockey broadcaster.

Dan Kelly in my view, is the best Hockey announcer of all time. Doc Emrick is amazing, elevating the game with his finesse and passion. But if Doc is more like the figure skater (or Flying Frenchmen), then Kelly was more of a bruising forward (or Broad Street Bullies). He wasn’t poetic like the great Doc is; he was simple and booming. I still here his “Shooooooting,” calls in my head. Heard him first on CBS, then I’d pick up His calls on a clear nite on KMOX. I lived in NY, where we had great hockey casters. Marv one… Read more »