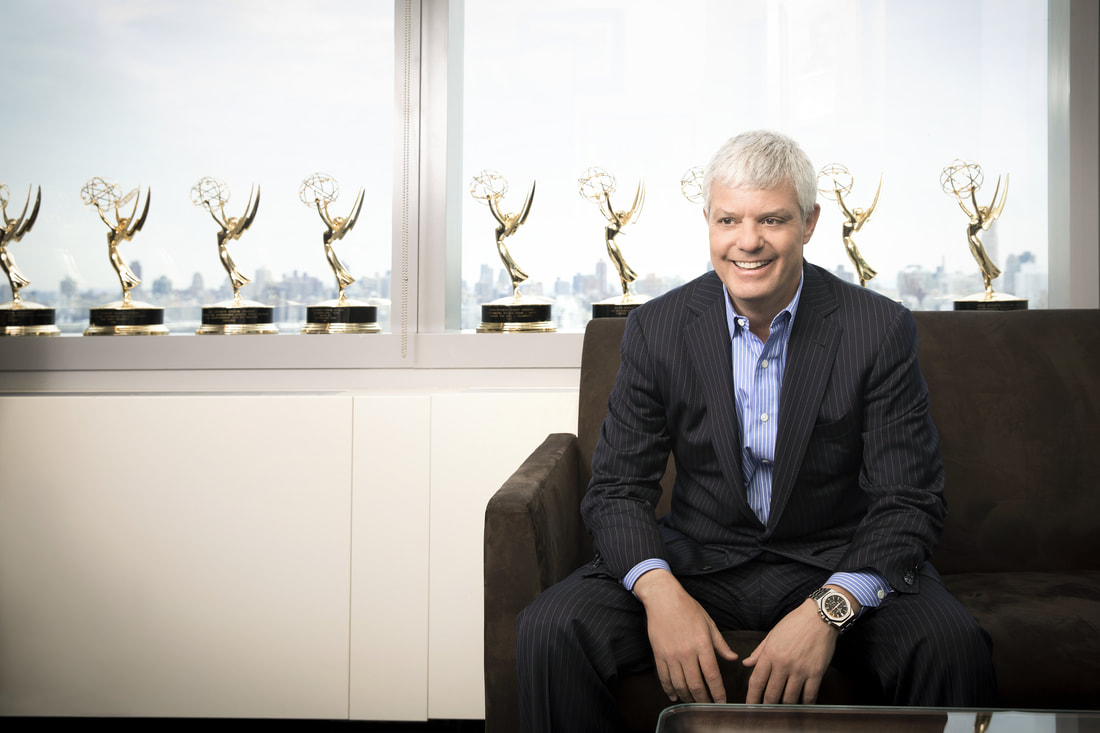 Those who have spent time in the sales trenches will appreciate David Levy.

After graduating from Syracuse, Levy pursued an advertising sales job in New York media. He knocked on sales managers’ doors only to hear the inevitable Catch-22. Get experience first. Undeterred, strikingly confident and never discouraged, paramount traits that still drive his success today, Levy pitched his scant resume to Doug Moss and was hired.

Flash forward, after years moving up the corporate ladder, Levy was appointed president of Turner and built the network’s sports portfolio through unconventional deals and out of the box creativity. Under his helm, Turner acquired rights to the NCAA Tournament through a synergistic partnership with CBS, bought nontraditional rights from the NBA, purchased Bleacher Report and has a cast of characters on the set who draw unrivaled chuckles. In the dense landscape of sports video, it’s not easy to develop programs that are a constant subject of conversation. Then again, there’s never a dull moment when Charles Barkley, Kenny Smith and Shaq go at it. Thank goodness for Ernie Johnson.

David was nice enough to give us a few minutes on the eve of the March Madness.

You went to Syracuse, known as a spawning ground for announcers. Was sports announcing your initial goal when you were in college?

Not sure I had the ‘pipes’ or talent to be an announcer.  Seriously, it’s not something that I was interested in pursuing.  Coming out of college, my initial goal was to work within the media industry.

What kind of educational curriculum would you suggest for young readers dreaming of being the next David Levy?

I think a student should be well-rounded and look to take a variety of different courses.  I   suggest students participate in Internship programs during their undergraduate years.  It allows for practical experience and the opportunity to build a network of professional contacts outside of their school.  Additionally, I think it’s important to land your first job or two.  Don’t get too focused on working in one particular field or company.  It’s about the experience and learning as much as you can during your first few years and figuring out your career path as you move along.

Historically, glittering sports-broadcast executives, names like Roone Arledge and Dick Ebersol, came out of programming and production. Your early roots were in sales. In other words, you broke convention, becoming one of the first network sports’ heads to emerge from sales. Yes, you also have rich experience on the international side and running other Turner interests. Still, does coming from sales change the lens through which decisions are made?

I don’t think so.  Every executive brings a different perspective and experience to the job.  For me, it’s more about the experience you bring to a position and the team you build around you that defines success and shapes the decision-making process.

It’s March Madness time! Turner has been pretty creative in the past, presenting the Final Four on more than just one platform. In addition to traditional coverage, fans have also had the opportunity to watch games with their choice of individual team announcers on other Turner networks.  What’s in store this year?

We’re excited to once again televise every game of the NCAA Tournament across TBS, TNT, tru and CBS, as well as offering a variety of digital and mobile opportunities for fans to view the games and content.

This year, TBS will televise both the NCAA Final Four National Semifinals and National Championship.  In 2016, TBS televised its first National Championship with Villanova’s memorable win over North Carolina and we’re hoping to have the same excitement with this year’s tournament.  And we’ll be bringing back the TeamCast, or team-specific telecasts, for all three games with those customized, fully-produced presentations airing simultaneously on TNT and truTV.

On March 11, TBS will also televise the Selection Show for the first time in the history of the tournament this year, and leading up to the Selection Show, we will have a four-hour pre-show available to fans through March Madness accounts on YouTube, Twitter and Facebook, along with NCAA.com and Bleacher Report.

Lastly, I have to mention Turner’s role with NCAA March Madness Live – which generated new records last year with nearly 100 million live video streams – and the NCAA March Madness Music Festival, which is enjoyed by tens of thousands of fans on site throughout Final Four weekend each year. During the past few years we’ve had a number of terrific acts appear at the March Madness Music Festival from Bruce Springsteen and the E Street Band, The Zac Brown Band and Aerosmith to The Chainsmokers, Imagine Dragons, Rihanna and Maroon 5.

Turner is joined at the hip with CBS, producing NCAA telecasts and selling sponsorships. Naturally, each network has its own culture. How do you and CBS make it work synergistically?

Since 2011, CBS has been a great partner and the relationship has led to tremendous results for both parties.  Since the beginning of our partnership, we’ve been guided by one overarching principle – to put the fan first.  We don’t look at it through the lens of what’s best for Turner or CBS and that eliminates the potential for any conflicts. We continue to collaborate on all aspects of the tournament presentation including production, scheduling, promotion, sales and distribution of NCAA content.  It has really been a successful case study that demonstrates how two mainstream media companies can come together – put the fan at the core of the decision-making process – and achieve a great outcome for all involved.

Many of the ad commitments were made in last Spring’s upfront before the college game was rocked by a scandal. Has there been an adverse effect on revenue since the news broke in the Fall?

We have seen record demand for March Madness this year. Premium live sports, which comprises the vast majority of Turner Sports’ footprint, continues to attract widespread interest and consideration from advertising partners, understanding these are premium, well-lit environments that engage with massive fan bases across the country.

You’ve done an enormous job building Turner’s sports stable. Deals with Major League Baseball, the PGA, the NBA and of course the NCAA were either fostered, reshaped or extended under your watch. Some of Turner’s rights now transcend live cable play-by-play. Have these deals met expectations and what can be next?

Thank you. I am fortunate to work with an amazing team of talented and smart individuals.

Premium live sports are a staple in Turner’s broad portfolio and a key component to our programming and business strategy, as they drive engagement and build passionate fandoms. At Turner, we recognize the consumption of video content continues to evolve and we’ve made strategic investments to advance all aspects of our business including linear, digital and platforms created over the life of our deals. The NCAA Tournament is a great example, with live game coverage available through four networks – TBS, CBS, TNT and truTV – along with NCAA March Madness Live.  We are looking forward to the launch of our new sports streaming service later this Spring, which includes our multimedia rights agreement UEFA.  In addition to distributing UEFA matches on Turner networks, this large volume of highly-anticipated matches will also be a key pillar to our new Turner Sports OTT platform.

Turner took a bite out of the digital sports space a number of years ago, acquiring Bleacher Report. How’s it working and what makes Bleacher Report special?

Bleacher Report has been a remarkable addition to our portfolio and it’s become the premier digital destination for millennial sports fans.  This is a business that has expanded into an influential brand that is driving the connection between sports and culture, reaching fans with an authentic voice and through content experiences that reach passionate fandoms natively across the platforms of their choice.  Whether it’s content like Game of Zones or the strategic investment made in the acquisition of House of Highlights, Bleacher Report is an established brand that will continue to disrupt and revolutionize the sports media industry.

Is Turner in an acquisition mode. If so, what would catch your eye?

Outside of the previously mentioned UEFA agreement, and recent partnerships announced for our new OTT service, there isn’t anything in particular to share right now.  However, we are open to new partnerships for our new sports streaming service when the right opportunity presents itself. Turner has always been focused on aligning with partners that create premium content across all platforms.  It’s important that the partnerships resonate and drives value with our fans, distributors and advertisers.  That will continue to be the case moving forward.

Many years ago, Turner ran an NFL package of its own. Fox recently nailed down Thursday Night Football. Was Turner a serious player in recent NFL negotiations?

We believe the NFL is a tremendous property, one that will obviously have continued success.  While we continue to have interest in a partnership with the NFL, the current Thursday night package was not something we were actively pursuing at this time.

Media continues to evolve through an unimaginable transformation. Where do you see Turner down the road?

We are entering into a new era of media.  The rate of change across the media landscape and our business continues to accelerate at an unprecedented pace and the way fans are consuming content continues to shape and change our business.  At Turner, we are singularly focused on fans.  Our focus is achieving the right combination of creativity and technology to provide the most compelling, engaging, premium content experiences for our fans.