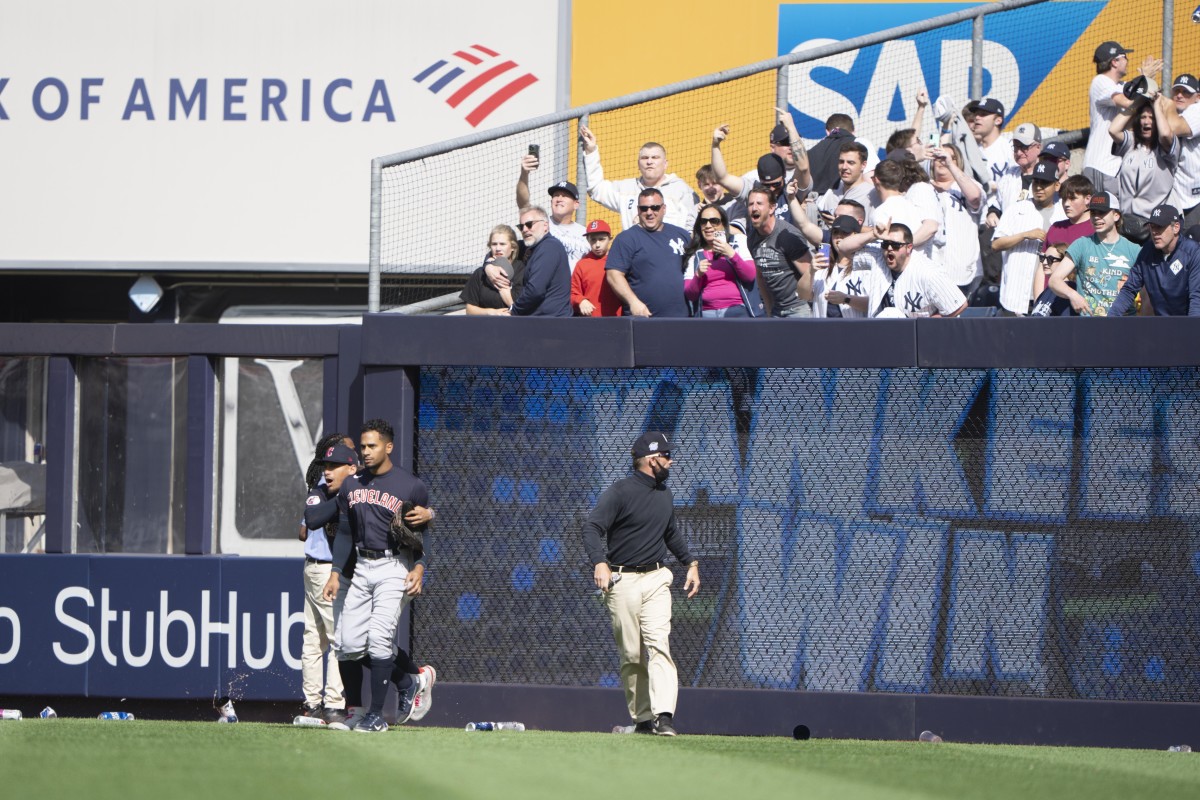 On Saturday, the Yankees’ shortstop Gleyber Torres produced a winning single that turned into the last swing of the game; a 5-4 final over the visiting Cleveland Guardians (heretofore Indians). Radio voice John Sterling then broke into an unrestrained rant, berating his home team fans for pelting trash onto the field. On the one hand, he was absolutely right. Good for him. He took a rightful shot unhesitatingly.

John’s description though was scant. It was his palpable anger that triggered my knee-jerk reaction, and I suppose his audience’s too. We were listening not watching, I began to envision a Yankee Stadium outfield, strewn with households of litter scattered across the outfield grass. Sterling continued his impromptu sermon labeling those who tossed the debris, “Hooligans.” He barked, “It’s disgraceful. That’s not Yankee Stadium.”

I guess he’s forgetting. Yes, at the new stadium, fans have been better behaved. But the ballpark is not completely filled with only gentlemanly fans or those perfectly engaged.

Sterling has been around the stadium for generations. It was just a few years ago that the historic Yankee Stadium was rated among the worst in America for behavior. For years, Yankee fans were tagged third harshest in baseball behind the Red Sox and Phillies. Yet, due in large part to steeper priced tickets at the new ballpark, the reputation has gotten better.

In 1961, two Yankees’ fans attacked the late and mercurial Jimmy Piersall with a hunting knife. He was a member of the Indians then. In 1986, a knife was also part of a Yankees-Angels game in the Bronx. It involved visiting Angel, rookie, Wally Joyner. That August, the Angels left the field after winning, 2-0. Joyner was then “hit in the left forearm by the knife, which was thrown from the stands,” the Times wrote. “This is crazy; it’s unbelievable,” Joyner said. ”I’m glad we don’t have to come back here,” meaning Yankee Stadium that season.

John might have forgotten too that the 1977 Yankees-Dodgers World Series was later referenced in the book, “The Bronx is Burning.” On ABC which carried that series, the country, couldn’t miss a towering blaze of an abandoned and dilapidated  apartment building that casted an ugly scene over baseball and TV. Howard Cosell and Keith Jackson were on the call to watch, lament and opine. Through the years, thankfully, things have gotten somewhat better in the neighborhood too.

Tickets today are more expensive limiting the potential customer base. Wealthier fans who own these seats don’t even show up all the time. Owning the tickets, an ostentatious sign of wealth, is apparently good enough.

There’s absolutely no excuse to throw items on the field and John was right to lambaste those who did. You would think that the intensity with which Sterling emptied his lungs in anger, there would have been injuries at the ballpark. But none was reported. On radio, Sterling made a fuss about hooligans. I didn’t see one police person on any replay.

If  the team’s radio announcer is calling the team’s paid customers hooligans, it’s got to be pretty bad; miscreants of nasty proportions. When the beer cans and water bottles were thrown at the Cleveland outfielders as the game ended, there was really only a mild commotion.

On TV, Michael Kay gave the Torres hit the special treatment it deserved, but he didn’t overdo it. The TV director gave viewers  a wider camera look and Kay gently condemned the fans for irresponsible behavior. Still, the scene wasn’t anything close to real mischief or chaos. It was nothing like what Sterling suggested. It seemed to involve only a handful of attendees.

Oh, well! It wasn’t the first time and not the last.

Interesting that Russ Hodges did the blow-by-blow on the second Ali-Liston fight with the phantom punch. It’s on Pat Hughes’s CD tribute and you can barely hear him over the screaming fans.

Sterling has never exactly been impressive at describing the action.

If I remember correctly, Lindsey once told the story of reading an AP report about an expected managerial change and noted that they weren’t always accurate on those things. In a moment the AP ticket in the booth moved again and it read, “We are, too.”