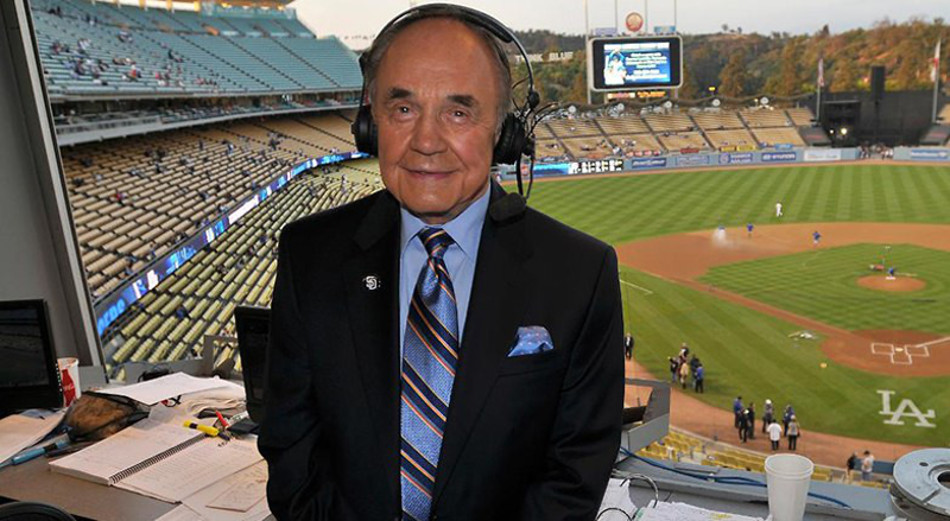 No matter where, be it at a cacophonous American ballpark filled with raucous fans or the reserved All England Club that brims with well mannered royalty, Enberg made viewers of all walks of life feel comfortable.

In his half dozen decades of on-air prominence, whether radio or television, the Australian Open or the Super Bowl, the NCAA Final Four or gymnastics at the Olympics, Enberg’s blend of elegance and coziness was heartwarming.

On radio, graphic word pictures give listeners the best seat in the house. On television, where fans already have the best seat and more, it’s the emotional connection with individual players that heightens viewers’ experiences.

Without shouting, Enberg was able to bond audiences with athletes; raising goosebumps and bringing chills to the millions who tuned in.  Mingling syrupy elements into his broadcasts, Enberg captured the core human passions that inspire athletic achievement and at times the resolve to overcome defeat.  He brought skeletal television pictures to life, masterfully sharing apt anecdotes that enriched the shots of lifeless cameras.

Serving a mixed constituency on national broadcasts, Enberg knew how to gracefully stamp broadcasts. When a camera showed a tranquil shot of the San Diego coastline, he would simply add, “And someone has to live here!” It told viewers, they’re always welcome to this heavenly town, opening the doors for hope and upward mobility.

Broadcast legend Marty Glickman was overly impressed with Enberg’s supernatural ability to make his audience feel that he was smiling while he talked. Dick’s love of sports and lust for life enriched audiences; suggesting implicitly that the world is a better place than you think.

He was never at a loss for the right word, even if it occasionally required a handy dictionary. After a great catch by a receiver, Enberg emoted “What prestidigitation!” Or his description of Don Shula, “the lantern-jawed head coach of the Dolphins.”

Inspired by the colorful times he spent with his NBC basketball partner Al McGuire, Enberg produced a play that covered the life of the late eccentric coach. Writing about “McGuire,” Milwaukee Journal critic Damien Jaques wrote, “Enberg captured the strongly independent, non-conformist drive that made his friend a bohemian populist and hustler in a three-piece suit.”

Enberg was a diplomat of sorts too. In the years NBC’s basketball production featured a three-man team of the mercurial McGuire and the opinionated Billy Packer, feelings ran deep. Yet Dick found ways to have the duo behave nicely in the broadcast playpen.

When I ran Westwood One, I hired Enberg to do radio play-by-play of Thursday Night Football. I knew he excelled on radio much earlier in his career (Angels and Rams). “It will be like getting on a tractor again. You never forget how to run it,” he reassured me. Leave it to Dick, who grew up on a Midwest farm, to find a memorable way of saying, “You never forget how to ride a bike.”

Whatever was asked of him on radio, Dick did enthusiastically, including many commercial reads, something not done on network television. He greeted sponsors so warmly that Tom Murray who runs Barbasol still reminds me today how much he enjoyed meeting him and the gentlemanly way in which Enberg conducted himself.

One Thursday night when an old friend popped his head into the booth before a game, he casually asked Enberg, “How’s Barbara (Dick’s wife)?”  “Oh, she’s doing great. She’s renovating and decorating our house on an unlimited budget. It keeps her busy.” They both chuckled warmly, the friend moved on and Enberg reset his eyes on his depth chart in preparation for the football broadcast.

When Enberg was in his early eighties and had already presided over a half century of broadcasts, he was asked what he would still like to do. He said, “A perfect broadcast! Haven’t done it yet.” Perfection drove Dick and steered him to extraordinary excellence.

In 2010, I did a piece for Yahoo, ranking the fifty most impactful network television announcers of all-time.  Enberg was fifth, behind Howard Cosell, John Madden, Brent Musburger and Al Michaels. After he saw the rankings, Enberg emailed me, “Thanks for the love.  Number 5, like DiMaggio…hopefully half as graceful.”

We’ll miss you Dick. Grace was your middle name.

Correction needed in the article: Curt Gowdy also is in the broadcast wings of the baseball, basketball, and pro football Halls of Fame.

I stand corrected for the oversight and will edit the piece accordingly. Gowdy himself told me that his best sport was basketball but that the best basketball announcer he heard was Marty Glickman. Marty got the award the second year it was given.

Curt was the first winner of the Gowdy Award named in his honor because he served as the Hall’s president for 7 years. Football’s is “The Rozelle Radio-TV Award” and baseball’s is “The Ford Frick Award.” Commissioner Rozelle came out of PR and Frick was first a writer. Thanks.