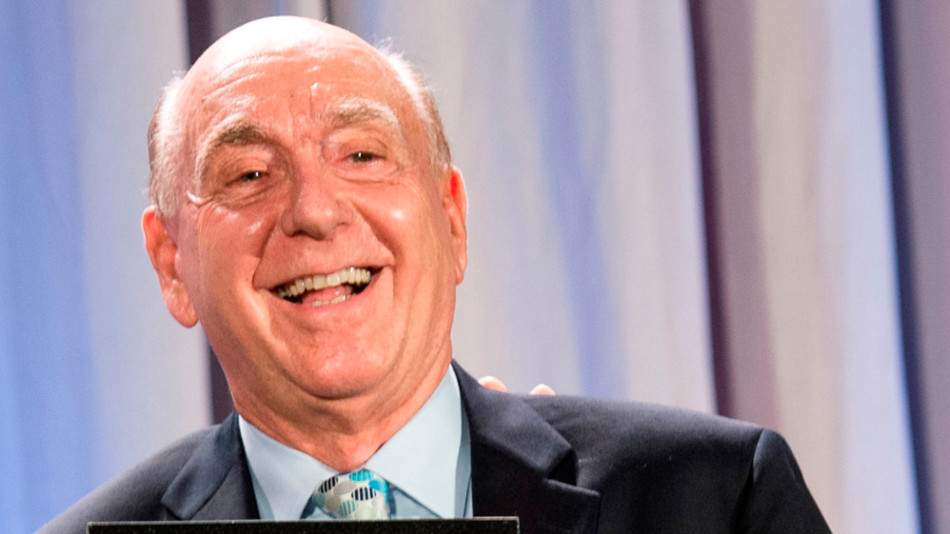 ESPN says it launched in 1979. In reality though it started on fumes.

Times were different. The industry predicted its demise. The over-the-air networks owned live programming and ESPN had no more than recorded shows; many Olympic like sports with limited interest. It would be many years before ESPN acquired the NBA, MLB or the NFL.

For the first decade, live college basketball was ESPN’s best attraction and Dick Vitale served as the garrulous protagonist of both the game and network. Bobbing and fidgeting, Vitale spoke with his hands and screeched with his voice. Say what you would like about Chris Berman, Bob Ley and the other early ESPNers. Dick Vitale was the face of the network in its formative years.

Before the internet, Smartphones and an endless number of channels, kids came home from school and they had the opportunity to watch hoops on ESPN all night. And when they did, there was Vitale, a motormouth who talked about six things in three sentences – all positively and with a big contagious smile.

The network and Vitale grew in lockstep.  Dickie V turned into a beloved figure; invariably showered with rock star love when he entered college arenas. Fans impersonated him regularly but few duplicated his tireless energy.

Today, you hear a guy who’s still so positive and upbeat that you think he came out from his mom’s womb running laps.

Vitale talks endlessly about all his charity work, the many millions he’s raised and his active role on the board of the V Foundation. He shares gut wrenching tales about youngsters suffering from cancer, the dinners he organizes and fund raisers he runs to eradicate dreaded diseases. You ask others with no agenda and they’ll privately share stories of Dick Vitale’s kindness and generosity.

At roughly the same time Vitale started at ESPN, John Madden was beginning to change the tenor of television football color. The burly Californian hammered away, using the field’s vernacular and doing so with a choppy vocal cadence and a rumbling parlance. For millions at home, it was as though crude hits and tackles on the gridiron were okay because Madden made a humorous show of them.

In a more benign way, Vitale too called basketball the way it had never been done before. His commentary was and still is a cross between a rant on a New York subway platform and a preacher at the pulpit. Vitale is often bellowing impromptu sermons about the romance and excitement of college hoops. Conventional strategic analysis isn’t generally part of his cheerleader’s script. Purists, like Billy Packer, never liked Vitale’s on-air style.

But today’s fans might not remember Coach Vitale. Yes, it won’t surprise anyone that as a coach, Vitale used his irrepressible energy to recruit top-notch players (e.g. stars who helped guide Rutgers through an undefeated regular season and a trip to the Final Four in 1976). And if you think the New Jersey native doesn’t know the difference between a pick ‘n roll and an eggroll, check his record as a DI coach. He took the University of Detroit to the NCAA Tournament and had an overall mark there of 78-30.

Dickie V was a hot coaching name in the late 1970s. After popularizing and elevating the UD program, Vitale was hired to coach the Pistons in 1978. But like many college guys who transitioned to the pro game, he was doomed to fail. The Pistons didn’t have the personnel to compete. A season later he was fired. Suddenly, the most positive and energetic man in basketball fell off an emotional cliff, from elation to dejection. All he wanted to do is coach again. But he never did.

Vitale wanted to remain in the rat-race of coaching in the worst way but his phone didn’t ring. The next opportunity was television— a job that he accepted reluctantly at first. Among others, Dick has his wife Lorraine to thank for television and the good life that followed. Let Dick tell you more. We talked recently.

Growing up in New Jersey, what was your home life like?

My dad was a tailor, my mother worked, my dad took a second job as a watchman at a mall. They called me “Richie.” They kept encouraging me. They said, “Be good to people and they’ll be good to you.”

How did you get into coaching?

I was a 6th grade teacher in New Jersey. I got a chance to coach high school ball and establish myself. I   get a break at Rutgers when I was hired as an assistant under Dick Lloyd (briefly the head coach in the early 70s).

You then get a chance to become a head coach at the University of Detroit where you had marvelous success. Life is good. You’re then hired by the Pistons. A little more than one season into the NBA, owner Bill Davidson fires you (overall record 34-60). What was that feeling like?

I’m thinking that I’ll get right back into coaching. This is early in 1979. We were living in West Bloomfield, Michigan and I’m thinking it shouldn’t take long. I learn quickly that people who I thought were friends were really just acquaintances. I was down. I was depressed.

Then came ESPN.  How?

Earlier, in 1977, my UD team qualified for the NCAA Tournament and we advance. We’re playing Johnny Orr’s top Michigan team. NBC is carrying the game and the announcers were Curt Gowdy and John Wooden. Both came to watch our practice as did Scotty Connal, NBC’s producer. We lost the game by like four points. A heartbreaker (86-81)! I remember it like yesterday. I tell the team at practice that John Wooden epitomizes greatness. Later, Gowdy, Wooden and Connal tell me they were impressed with the way I ran practice and how I communicated with the players. Connal intimates to me too that I would be a good commentator.

In 1979 when I was let go by the Pistons, ESPN was just starting. I’m out of work. All I want to do is coach. Connal calls and tells me that he’s at the new ESPN and asks me to broadcast a game. I told him that all I wanted to do is coach. I had no interest in TV and never heard of ESPN. My wife Lorraine (married 46 years!) says try it, you’ll have some fun.

So how did it go?

I arrived late for the first production meeting in Chicago. Yet, after my first telecast Scotty calls and says he loved my enthusiasm, knowledge, stories and opinions. You “educate and entertain,” he said.

In the 1980s, ESPN had virtually no live programming, no NFL, no MLB.– You helped build ESPN in its formative years. Do you deserve equity in the company?

You look back now, almost 40 years later. What are your thoughts?

ESPN was the greatest thing that ever happened to me. I tell everybody ‘I’ve been stealing money.’ I would never have anticipated it. I was motivated by one thing, winning. I didn’t think I’d ever like TV. A few years after I started in 1983, Connal sees me at the Final 4 where I was besieged for autographs. He smiles happily and says, “Dick, I told you so.” Today, they still scream “Dickie V” when I walk I walk into an arena.

Arguably, you and Billy Packer are the biggest college basketball television analyst names ever. You’ve had your differences. He essentially says that you don’t focus on the game.

I don’t really know him. We’ve never spent time together. Our styles are different. As I’ve said, he’s vanilla and I’m 31 flavors.

You digress on the air. You’re not always talking about the doings on the floor or game strategy. Why?

I’m about personalities. I loved Phil Rizzuto, Joe Garagiola and John Madden. They were passionate and storytellers. They looked for human interest angles. It’s the emotion of the game. I watch baseball and in the third inning – they’re analyzing every pitch, slider, a split finger fastball. It puts me to sleep- I try to say something of the water-cooler variety. I’m offended when they say “He has shtick.” I have enthusiasm.

You’ve never called a Final 4 domestically. Do you have a sense of unfulfillment because of it?

CBS wanted me to do the tourney years ago. The ESPN president, George Bodenheimer called me and said we can’t because we love you, you’re so good and we want you to ourselves.

Yet, I’ve done so many big games, I’ve had a platform at the Final Four reporting for ESPN. No regrets. And I’ll be calling my fifth straight Final Four for a huge international audience. No complaints.

For many years, when you were most visible with ESPN, George Bodenheimer ran the company. Did you interact much with him?

When we first met, George was young and starting out. He was saddled with lots of busy work. One of his jobs was serving as my driver.  I’m told that the ESPN higher-ups tested him to see whether he can deal with my high energy. He did such a good job as my driver that they promoted him to the tape library. He kept telling me he wants to grow. I saw something special in a young George and I knew he would excel. I told him to be patient. When I had throat surgery about ten years ago, he called, reassured me and was genuinely concerned. Thankfully, everything worked out. George would come down to our home here in Florida and we would have dinner.

I’m in 13 Halls of Fame. When I was inducted into the National Sports Media Association, I had George introduce me. That’s how strongly I felt about our relationship and how much I admired him.

What was your relationship like with his successor, John Skipper?

He was great to me. After he took over for George (Bodenheimer) he made a special trip to see me in Florida. He took me to dinner and said, “Dick, you have a job with ESPN for life!”

How did you react when Skipper left and revealed that he had an issue with substance addiction?

I was totally shocked like everyone else. I had no clue, absolutely no idea.

How would you describe your legacy as a broadcaster?

I have passion, pride, I look at things positively, I look for the good, not the bad and I don’t want to rip people. If criticism is warranted, I’ll do it without hurting anyone.

Who’s the best college coach to go to the pros?

I have to preface it. A coach has to be given a team. The NBA isn’t about recruiting and building a program. Yes, it’s motivating but not everything is under the control of the coach. That said, today it’s Brad Stevens (Celtics). You get a guy like Danny Ainge as GM. He’s done a great job. That doesn’t hurt.

If there’s anywhere that Rick will coach again, it would be in the NBA! Hey, he should have known about the prostitutes. The woman in the restaurant is in inexcusable. But let me tell you, there’s a rush to judgment here.  Rick’s never been indicted for recruiting violations.

I’m 78, feel great and exercise every day. I do lots of charity work, broadcast, do motivational speaking. I’ve probably addressed more of the Fortune top 50 than most. I’m not stopping.