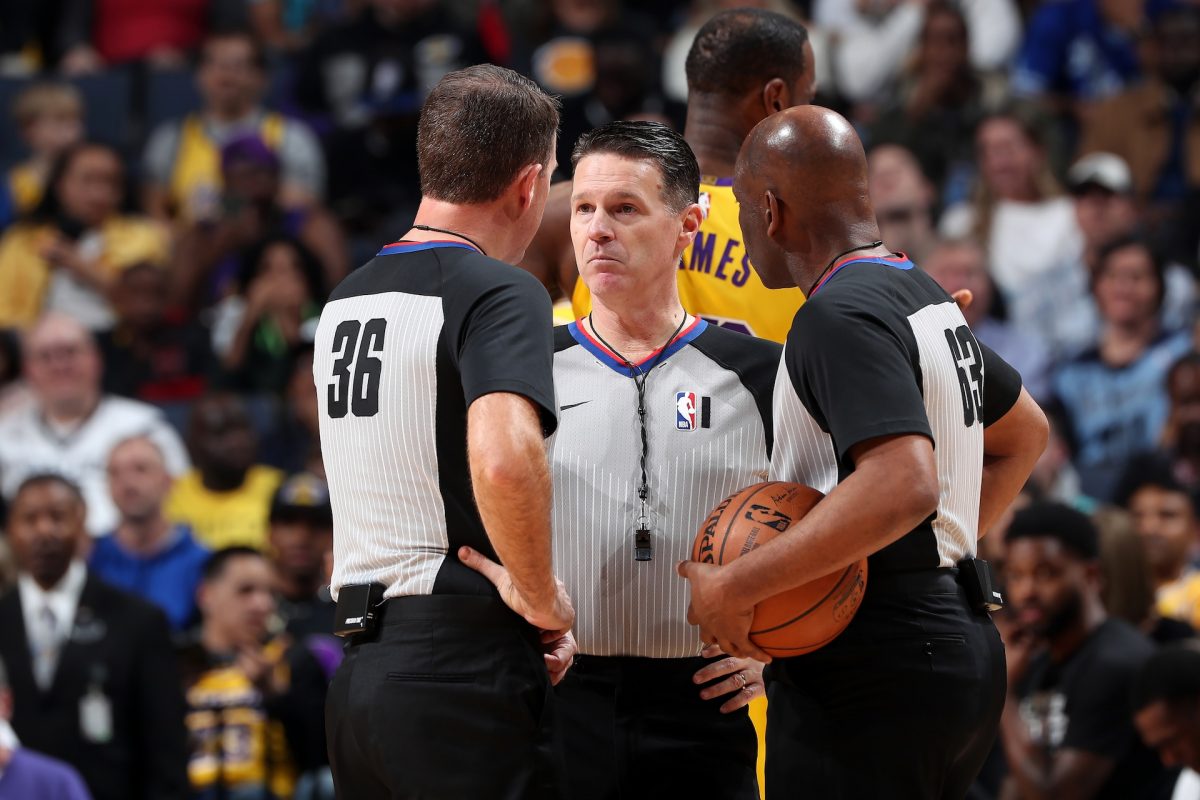 NBA coaches and players aren’t the only ones in the arena to keep up with the league’s ever-changing rulebook. Some broadcasters do too. They should.

The NBA says that another rule will be reviewed this summer, covering offensive players who fish for fouls by using unnatural shooting motions. It often coaxes contact by defenders.

It wasn’t until 2012 that the NBA imposed the leg kick rule so that shooters could not solicit contact with an extended leg. It came a full decade after Chris Webber nicknamed his one time TNT colleague, Reggie Miller, “the human kickstand”. Finally the spectrum of unearned fouls is expanding from leg kicks to all unnatural shooting motions. But more change may still be needed, because let’s face it, the NBA does have a broadcast problem.

The NBA’s most prominent voice, Mike Breen of ESPN did some refereeing in college and at one point  considered making a career out of it. Others, like a number of analysts, aren’t terribly far removed from their playing careers.

If you’ve been at it for a long time you know that LOTS of NBA rules have changed. Broadcasters have to keep up with them.

On a Clippers broadcast early last season prior to Covid, Breen raised a question of who caused the ball to go out of bounds, not necessarily who touched it last. Prior to freeze-framed replays, referees employed some independent common sense. The question arises when a player’s uniform or finger tip brushes the ball but doesn’t alter its trajectory. In such an event, shouldn’t the player who touched it before him be responsible for forcing the ball to go out of bounds? Common sense and the naked-eye would dictate so.

Mike might have known that at that time the league had considered changing the rules to intent. But when it came down to it, the NBA felt that intent leaves decisions up to interpretation so replay won.

Years ago, the late Dave Jennings, a former punter and later a broadcaster, studied the rule book on team flights. Dan Bonner who calls the NCAA Tournament is versed on the rule book.

During the Eastern Conference Finals, Clint Capela drained a shot while lurching right and tight-roping the right baseline. It was a circus-like shots that sailed  over the backboard and settled through. Analyst Reggie Miller jumped in immediately, telling the audience that that the bucket stands because of a change of rules years ago. He immediately referenced a similar eye-popping bucket made years ago by Larry Bird that was disallowed because the rule was different then.

Kobe Bryant once spoke about how he read the referee manual so he knew exactly where the referees were supposed to be stationed, what they were watching for, and with what he can get away. Make no mistake, many coaches have exercised the same kind of diligence. Knowing the rules will win a game here for them here and there.

Even die-hard NBA fans will from time to time need the help of some encyclopedic minds who know the rule book to steer them through convoluted stipulations. Jeff Van Gundy, the longtime NBA coach, now on ESPN, was right there when the officials were looking at a replay assiduously. He immediately pointed out  to the millions watching at home that the refs were viewing a replay, checking for a potential illegal substitution.

There’s the line, “Something good comes from an event that was bad.” In the bubble during the pandemic, NBA referees used microphones to explain rulings after reviews. It was a big help. ESPN also has a rules expert, Steve Javie, a former ref himself, to offer some insight and interpretation on occasions when plays are under review.

Our on-air game remind us how often the referees make the correct call despite deluges of complaining, barking and chanting from players, coaches and fans.

Van Gundy, one of the most opinionated of analysts, started years ago with one of his typical rants on replay reviews. During the final stretches of an intensely competitive game matching up the Pelicans and Timberwolves, an Andrew Wiggins dunk prompted a lengthy replay review of a possible hostile act. “I get so bored of these reviews,” Van Gundy said, “We had a great game brought to a grinding halt for a 12 minute review! Appropriately, Van Gundy had the pleasure of calling game two of the West Finals between the Clippers and Suns.

The final two minutes of an eventual one point victory, ended with a most memorable play in the last second, the valley-oop by the Suns’ Jae Crowder to Deandre Ayton. But the drama was marred with replay reviews. The 48 minute basketball game took about three hours to play, including about 30 minutes dedicated to the last two minute of game time It took seven minutes to complete the last 8.4 seconds!

Van Gundy wasn’t the only one bored with replay reviews.

Stephen A. Smith, never one to hold back, stated his opinion the next morning on First Take; “It’s horrible for basketball.” And for once, Max Kellerman didn’t disagree with him. Getting the calls right is one thing but as Kellerman added, “What the hell takes so long?” Kellerman shouted, as he often does, “I can see the right answer in fifteen seconds.”

“It’s a rhythm game,” Stephen A. added, “Here you have officials disrupting the game because clearly they haven’t mastered their art.” Like the game itself, calling it requires a rhythm of its own, and seven minutes of airtime is a lot to talk about only 8.4 seconds of basketball.

Colin Cowherd hosted podcaster Ryen Russillo who boisterously voiced similar concerns; “It’s hurting the product… I don’t want to sit around for 30 minutes at the end of these games because it totally destroys those emotional moments we grew up on.”

The product is most definitely hurt when a 48 minute basketball game takes longer to finish than a 90 minute soccer game The entertainment value suffers. But the refs aren’t necessarily at fault. “Everything is micromanaged too much by their bosses,” Van Gundy said on the Rich Eisen show. And he’s right. Between the Twitter mob, the last two minute reviews and player scrutiny, the refs are terrified of getting calls incorrect. “This micromanaging has them on pins and needles,” Van Gundy added.

So who suffers from all this? The viewers and the broadcast. Thirty minutes of television for two minutes of  game time is hardly a bargain for fans, the players or the commentators. Some of them aren’t shy of making it known on air, most notably, Jeff Van Gundy; “If the game is for the fans can we speed it up?”