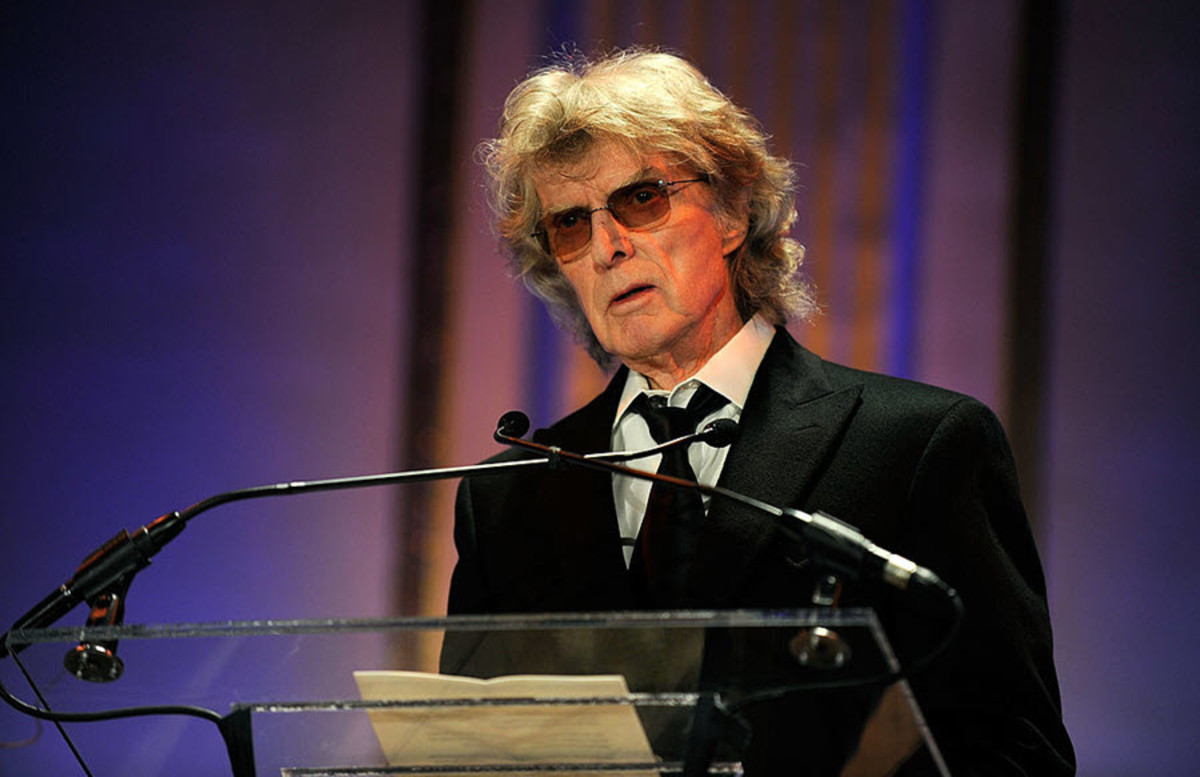 Don Imus worked at WFAN from 1988-2007. He gave the fledgling all-sports format a jolt of energy which helped turn it into a behemoth

At some point in the early 80s, I was at a private function at Madison Square Garden. Don Imus was there too and must have been drunk, stoned or both.

Don didn’t know me from a hole in the wall when he saw me holding a cup of Coke in a room full of guests. He strolled toward me, slowed his wobbly gait and asked, “Can I see that cup?” I said sure and handed it to him. Imus then looked me in the eyes and for no particular reason, tilted the cup over on its side, casually pouring every last drop of fluid over the floor. He returned the empty cup, never said a word and moved on. I wouldn’t see him again for close to ten years.

Constant praise is not a perquisite of stardom. Don Imus was a complicated man, a shock-jock who had little more than a passing interest in sports.

Humor, inflammatory comments and outlandish accusations were his tickets to fame. He was paid to stir it up. He did, but it eventually caught up with him.

In 1988, coincidence, fate and happenstance turned him into a savior of America’s first all-sports radio station. The I-Man was an unlikely hero.

WFAN hit the airwaves in New York on July 1, 1987 over an AM signal that had its geographic limits. Its  programming had no compelling local personalities and advertisers weren’t lining up to buy spots. The owners, Emmis Broadcasting, were bleeding cash.

A year later, NBC sold its radio stations and Emmis bought its New York AM stick, WNBC. The bosses at NBC didn’t know it then but inadvertently they were the white knights who facilitated the future of all-sports radio .

As a result of the purchase, WFAN moved its all-sports format down to 660 which pumped out the strongest signal in town. The most important asset Emmis acquired was WNBC’s mercurial morning man, Imus, who came to town in 1971.

At the old WNBC, Imus first presided over a a program that ran oldies. Between spinning records, he’d employ outrageous humor, trying for instance, to reach outcasts overseas like Idi Amin, the butcher of Uganda. As the years progressed, Imus in the Morning turned less music and more satire, which for its time had a striking edge.

Before WFAN, Imus’ only real connection to sports was his morning update man, Don Criqui, an established, best in class, crisp, network play-by-play voice. The I-Man would would set Criqui up for a string of one-liners that would produce chuckles from those engaged. The two Dons were part of the morning shtick. But Criqui left WNBC before it turned all-sports under the WFAN call-letters.

In the years leading up to Emmis’ purchase, Imus was getting discouraged. NBC was losing its interest in radio, ratings dropped and the I-Man was in and out of rehab. The Emmis acquisition gave Imus hope and an infusion of enthusiasm. The very name Imus had been interchangeable with the 660 frequency for 17 years.

Mark Mason, who successfully programmed FAN and eventually put together the wildly popular duo of Mike Francesa and Chris Russo, said, “It was almost as though the station (WFAN) came to Imus, not the other way around. The station’s sports niche would never have had a large audience until Imus was part of it.”

John Donald Imus Jr. was all-sports radio’s lifeline, its salvation. Joel Hollander, who was then the sales manager of WFAN and later ran CBS Radio said, “Suddenly, when we had Imus, corporate executives in midtown and the Wall Streeters downtown would talk about what Imus was saying. Imus gave the entire station a sense of recognition and relevance.”

At 9:59 each day, listeners would hear a recorded announcement, “This ends the entertainment portion of the broadcast day of WFAN. For the next 20 hours, you’ll be listening to imbecilic prattle.” It was followed by an audio test pattern and static. On cue, the sports talkies followed.

In a warped but familial way, the I-Man cleverly embraced  the sports talk mission. There was a method to his madness. For instance, afternoon anchors Mike and the Mad Dog became Fatso and Fruit Loops.

Imus had begun delving deep into politics, regularly interviewing the likes of John McCain, Tim Russert, Doris Kearns Goodwin, Jeff Greenfield and other luminaries. The interviews were different. Don would unflinchingly ridicule anyone who hit his stream of consciousness, including his guests with whom he’d toy playfully. That’s playfully as defined by the I-Man.

But by the late 80s and 90s, gay and Polish jokes, popular in Johnny Carson’s day were taboo. The country was turning more sensitive. The culture changed. The climate of acceptance was stricter.

At times in his early WFAN years, Mike Francesa served as his morning sidekick. “I learned lots about radio from Imus. He told me to bring something new to the program every day. Much of the legacy that I built was based on his success. Imus worked his tail off. At 12:30, he was still there and I would walk into his office. It was the station’s nerve center and we would talk strategy.”

Francesa said that the first morning he did a sports update for him, Imus took a piece of gum out of his mouth and threw it at him. Mike almost lunged at the I-Man.

Chris Russo, now at SiriusXM, said, “Imus wanted the afternoon show to succeed.” Russo too underwent the Imus crucible. He first got some reps as a weekend talkie, then worked mornings with the I-Man, meriting his blessings and earning a fulltime show.

Eventually, Mike Breen got the permanent sports seat next to Imus. “I was a naive kid. Without him, I don’t know where I would be. His impact on my career was immeasurable.”

When Mike Breen became the young and inexperienced Don Criqui, Imus was less forgiving. It was as though he was hardening his fresh sidekick, whipping him into a crustier, insensitive role.

Breen learned to take a punch from Imus and hit back. In time, Mike could come across as a split personality, the friendly guy who called games on radio and television and the other who was coaxed to engage in derogatory humor with Imus and his morning acolytes.

I’m not sure Mike ever felt comfortable in Imus’ tinderbox of a studio, a playpen of funny but nasty polemics. Aren’t we all often judged by the company we keep?

Meanwhile, Breen’s play-by-play career advanced. He was calling Knicks games and getting work nationally. Eventually, as though he saw it coming, Breen left the man who gave him his biggest break. He did so after 14 years, before the show’s satire could turn completely offensive at the drop of the I-Man’s cowboy hat. Imus was on the brink, just as social media ballooned with venom. Who knows whether the PC police would myopically have deemed Mike guilty by association. Through Twitter, the world rushes to judgment and Mike got out in time.

Imus though was layered with Teflon until that infamous day in 2007 when he called the Rutgers women’s basketball team, “a bunch of nappy-headed hos.”  Advertisers threatened to bolt and the local African-American community was calling for Imus’ ouster. CBS which by then owned the station, had no choice but to fire him.

The brains behind lots of Imus’ skits was Charles McCord. He wrote much of the comedy and served as the station’s morning newsman. Charles and Imus sat side by side for some four decades.

After Imus’ death last week, McCord told WFAN unequivocally that “Imus birthed WFAN.” He says that the entire Rutgers comment produced eleven seconds of Imus’ life, adding, “All those vile things they said about Imus on the internet, berating him, were repugnant.” Breen and McCord both said they’d never witnessed a racist bone in Imus.

Funny, when Francesa worked with Imus in March, 1989, the two had a bet. Francesa said that Seton Hall would advance to the Final Four. Imus didn’t believe it and promised to give him a red Porsche if The Hall did. The Pirates made it to the title game but Imus never paid up.

That might have been one of the earlier intersections of the Imus Show and sports. It was a subject of conversation and for good or for bad, it connected the dots between Imus in the Morning and the sports programming the rest of the day.

Through the early years, Imus followed the overnight man, Steve Somers, an institution at WFAN, a station original, who’s been there some 32 years. Imus would humorously complain that the studio had a stench every morning by the time he settled into his seat. Still, Somers had fond feelings for Don. “He was a bit intimidating but helped me with my confidence.”

Bottom line, any book on sports talk radio must include the name Don Imus in brilliant and colorful font.

I listened to imus when I was in grad school in New York City and for a while afterward. He was a complete package in the sense of being funny and serious, troubled, an addict, a satirist. It’s well and good to say he didn’t have a racist bone, but how did he make that statement about the women of Rutgers without one? Yet McCord is right that his career and life shouldn’t be judged only by those 11 seconds, and it is worth remembering that he learned from it and regretted it. Some of his earlier stuff was terrible,… Read more »

One thing I thought Imus knew very well was radio and what it takes to have a successful program. Many times he criticized a broadcast where the multiple (maybe only 2) voices talked over each other. On the other hand, Imus was not a fan of the great Vin Scully. During a sports update clip of the Twins’ Gene Larkin’s winning base hit in game 7 of the WS., Imus signaled for his “explosion” sound effect after Scully called the hit and then followed that with ..”and wouldn’t you know.” After “blowing it up” Imus mimicked the “wouldn’t you know”… Read more »

Loved Imus. A unique iconoclast. I was flattered when , on his radio show while watching CBS coverage of the U.S. Open tennis in the ’80’s , he called my broadcast partner Mary Carillo and asked “how’s the owl doing?”, a reference to me and my fashionable eyeglasses of the time which featured round lenses. Only guy who wore cowboy boots in Manhattan.