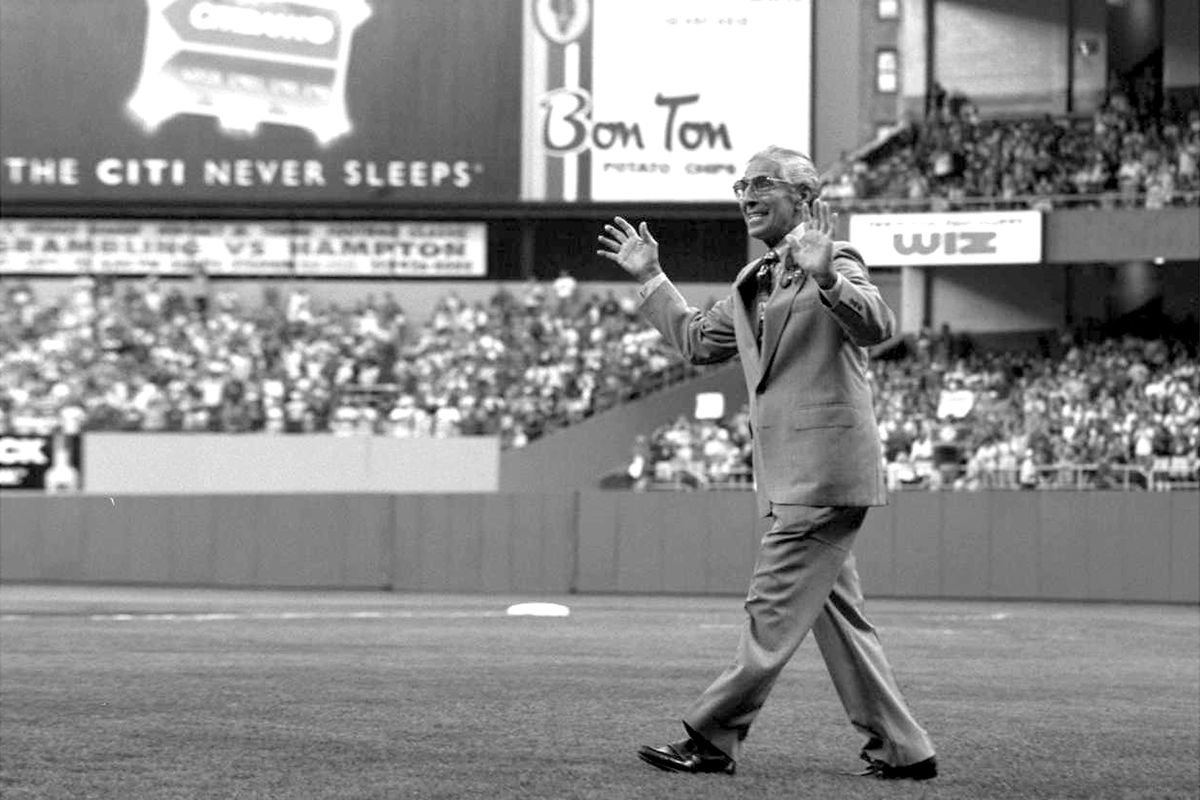 Part One – More to come

Phil Rizzuto! Why? You ask.

Wasn’t Mel Allen the most popular Yankees’ voice ever? It may be ludicrous not to put him on the highest of pedestals. Mel dominated the 1950s. The Alabaman did virtually every World Series too in those years on NBC TV or Radio.

The truth is that there were and still are many popular baseball announcers in New York and some still flourishing. But sadly, by the early 1960s, Mel’s talent, shelf life and quickness started to fade. It wouldn’t be until the 1970s when This Week in Baseball was created and some of his magic came back. Mel’s revival on the highlight show triggered memories of championship teams and Allen’s golden tongue. All those World Series and All-Star Games over which he presided be they TV and radio. At the end of the 1964 season, he was let go by the Bronxites and not asked by NBC to call the Fall Classic.  Many, many millions couldn’t believe it. Phil Rizzuto, already popular, followed him.

For all the talk that followed, Mel was with the club for only 25 years. The Yanks and baseball Giants had shared a radio station early. When the clubs split and went in their own direction, Allen was the lead Yankees’ voice for 18 years (1946- 1964). Mel helped train Russ Hodges (1946-48) and Curt Gowdy (1949-50) in that time as his sidekicks.

It was Rizzuto who won the hearts of Yankees fans for 40 years. He learned under two taskmasters, Allen and Red Barber. But Scooter really learned more on his own. No matter what he did, fans found him humorous and comforting. He left games early. “Hey, I want to beat the traffic.” Lightning was another thing. “Holy cow. I’m getting out of here!” Road trips, he didn’t like those either.

Through his broadcast career, Rizzuto was in the Yankee booth for forty years (1957-1996).

We’ve labeled each of the voices most loved and admired, team-by-team and city-by-city. So the New York Giants were connected to Russ Hodges and his hysteria covering the Bobby Thomson-Ralph Branca drama underscores it. The love of the longtime Yankees’ fans of Rizzuto and Mets’ followers of Bob Murphy tells a NYC story too.

There’s so much to say about these colorful men, so I just blurt whatever hits my head and share little research here:

Longest tenured with club. Came with birth of the Backs in 1998. Recently cut road trips because of health issues.

The man had a wonderful and wry sense of humor on Turner’s Bravescasts.

A master on Orioles, Colts and national World Series. Thompson did a ton. Wonderful storyteller.

Fred Hoey nipped at the bottle in Beantown, did Sox on radio too and when he was fired the first time, the fans protested and Hoey was reinstated; not the second time. Jack Buck loved him as a kid.

Yes, Gowdy and Ned Martin were wonderful. Joe is still mellow and seemingly attached to every Bostonian. Forty years calling Red Sox! Believe it or not, he grew up a Yankees fan and that of Mel Allen.

Taught voices how to use them, From Scully and Glickman wo Waite Hoyt and so many others who did baseball.

Synonymous with the Cubbies and many others in Chi-Town.

Hawk became a free-stylist, a rooter and was often emotional. One of the best golfers in MLB.

Marty followed classics, Hoyt and Al Michaels. Marty came to Cincinnati in 1974 and stayed through 2019, 46 years. A mix of thrilling and laboring seasons. Told it as he saw it. For fans, Brennaman was an honest sounding board.

A pitcher, severely injured in 1957, hit by the Yankees’ Gil McDougal, he became a team voice and held the microphone for 34 seasons, mostly long ones Cleveland. Badly hurt in a car accident in 1998 on his way to Florida, he died in 1998. Tom Hamilton will exceed him soon at 30.

Started as a Cleveland TV play-by-play player in 1985 and left for the Colorado Rockies in 2003. A Cornell man and author, Warning Track and Night of Destiny, he’s been a baseball voice for 38 seasons.

He might not have heaped praise on Leo Durocher or Red Barber, but not a disparaging word when it comes to others, other then laughing at himself. Among all-time greats! In Detroit, baseball time was Ernie time. Beloved.

It’s funny to think about these. Unquestionably, the others were better broadcasters, but Scooter was a great personality. And there’s room for both. Unfortunately, we lack the latter now–those who TRY to be great personalities fail because they’re trying. Scooter was natural, and that’s important.

Another funny thing: If you talked with a Tiger fan in, say, the 1950s, they would have said that Harry Heilmann was the greatest ever and would never be matched as a beloved Detroit figure. But there was only one Ernie, and there have never been enough of him.