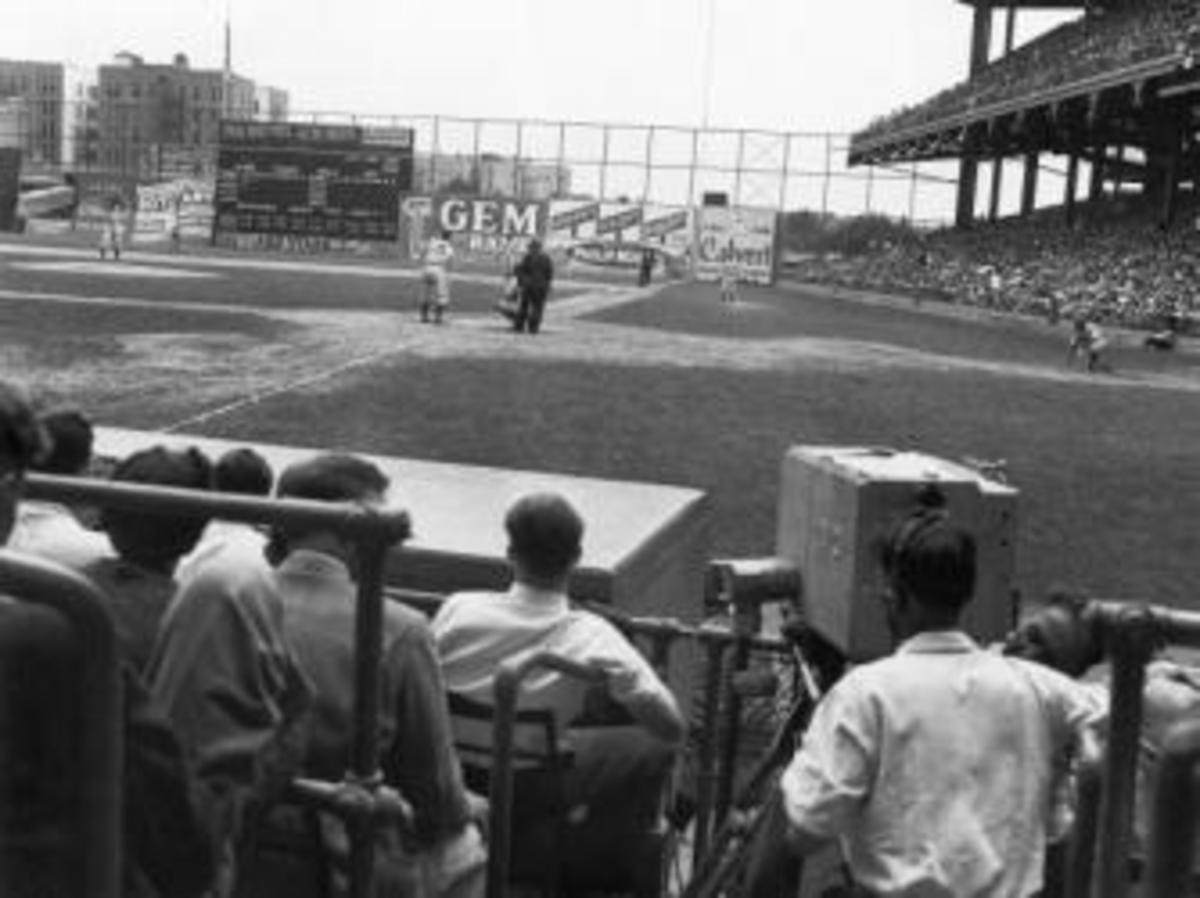 Yesterday, NBC circulated a press release that triggered my stream of historical consciousness. Today, the granddaddy of the broadcasting networks celebrates its 80th anniversary of producing the first televised sporting event in American history. Yes, on May 17, 1939, a college baseball game between Columbia and Princeton played at Baker Field in Upper Manhattan was televised  by experimental station, W2XBS. Eventually, this would be WNBC-TV, Channel 4, the flagship of the NBC Television Network. No one that day, in the thick of radio’s golden age, could envision what would eventually come of the tiny black and white flickering screen. NBC Radio’s signature sports broadcaster, Bill Stern, called the game.

The production used just one camera, something you might see today when high school or amateur sporting events are streamed. Although back then, the set itself was a huge and heavy console and the screen no bigger than what you see on your Smartphone. Basically what you view today when you Facetime is worlds better than what the few hundred watchers experienced that day.

Later that summer on August 26, 1939, NBC produced the first Major League baseball telecast. Cincinnati played the Dodgers in Brooklyn and the game was called by Red Barber.

To appreciate the underwhelming reach of the college telecast that spring day, consider the numbers. In a country of some 139 million people in 1939, only a few hundred homes had televisions. And the primitive technology was hardly reliable. The picture would pop off and on. And when it would stay on, it would jitter or fidget horizontally or vertically. So the telecast had little impact across the American landscape, yet it augured what was to come and how it would change American lives. But few knew it because few saw it.

Under founder David Sarnoff, NBC was a pioneer, starting with radio. On July 2nd 1921, there was a somewhat-successful effort to broadcast the big heavyweight championship fight between Georges Carpentier and Jack Dempsey. The goal that day was to make the fight available in Loew’s theaters by using ship to shore communication. The fight broadcast is considered by many historians as the unofficial beginning of radio. The popularity of the heavyweight bout and the pervasive talk of the broadcast jump-started radio, something parent company RCA was hoping to do so it can sell radio sets.

The NBC Radio Network officially launched in 1926, a year or so before CBS and some five years after radio started sprouting across the country through a series of local experiments and governmental licenses.

During the war, there was little growth of television. It was later when the medium took off. By 1948, there were two million television sets in American homes, of which 720,000 were in New York City alone. Until cable came along, decades later, suburbia in the far reaches of big cities got little reception.

On September 4th, 1951 the first coast-to-coast telecast was aired when President Harry S. Truman addressed the nation, then with 13 million television sets. In 1950, only nine percent of American households had a television set. Yet by 1960 the figure had reached 90 percent.

Sports played a critical role almost one hundred years ago when radio was an embryo. The talking box was the internet of the day. NBC ran all the major fights, the sports craze of the first half of the 20th century. The network also aired the big bowl games. In 1927 for that matter, the Rose Bowl was the radio network’s first national broadcast. World Series, horse racing, college football, Olympics, you name it. NBC Radio dominated the sports airwaves.

As television homes ballooned, NBC cameras were at big events. The peacock ran the Rose Bowl, college basketball, the NHL, the NBA, and prize fights. The World Series was a fixture. In fact, it wasn’t until the 1970s that any network other than NBC carried the Fall Classic. Pioneering announcing names were associated with NBC. Mel Allen would do virtually every World Series in the early years and many Rose Bowls too. Curt Gowdy dominated network sports when NBC had the biggest of rights including the NCAA Tournament. Lindsey Nelson was a fixture on NBC in the 50s, doing football, the NBA and the MLB Game of the Week.

In a day when everything is available to us at our finger tips, let’s salute our history and remember how we got here. NBC clearly played a major role in the evolution of broadcast sports.

NBC has the Preakness this weekend. Preakness Prep coverage begins at 2pm Saturday on NBCSN and the Preakness Stakes at 5pm on the NBC over-the-air flagship.

For those in their cars, SiriusXM will air programming throughout the day from Pimlico offering listeners pre-race analysis, and interviews with jockeys, trainers and owners. On site coverage airs on Sirius channel 219, XM channel 201, and channel 964 on the SiriusXM app and begins at 8:00 am ET

Back in 2005, the Dodgers did an experiment: a telecast based on each decade of how they televised games, by inning. So in the first inning they started with the 1950s and having, I think, four cameras. They did in black and white, and there were no field level cameras until around the 3rd, and no replay until then, and so on. It brought to mind Vin’s comment about watching the long lost telecast of Larsen’s perfect game and being bored to tears because he (to a lesser degree Mel Allen) was so scared of critics that he said almost… Read more »

FOX did the same thing in August of 97 for a game (Dodgers-Cubs, IIRC) Rockies-Pirates was in that same regional window, and I was disappointed that that game didn’t get the same treatment.

Going fast–Yes, Harry S. and the S from what I remember stands for nothing- He was given a middle initial – no middle name- Corrected.