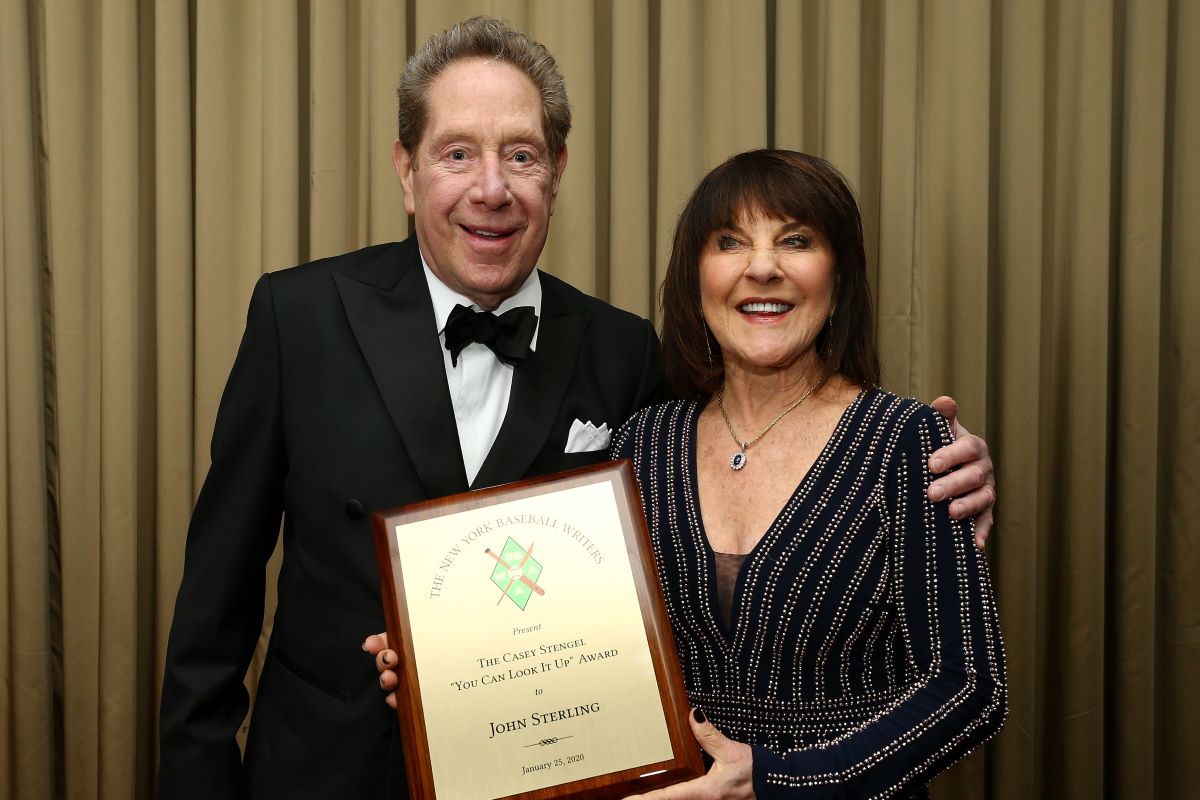 The series features one Voice from each club who represents that franchise: current, retired, or deceased. Today we profile John Sterling, long-time radio Voice of the New York Yankees, who lost to the Red Sox in Tuesday’s American League wild card, 6-2.

Born July 4, 1938, in New York, John Sterling joined his childhood club 33 years ago. Has he become a legend, a Voice who radiates excessive self-regard, or somewhere in between? The same query faced Allen, the Redhead, Harrelson, even Phil Rizzuto among others. Any listener’s judgement can be a factual-free zone.

Growing up, a Baby Boomer could not trek the Tri-State area without hearing Sterling’s idol: Allen, “The Voice” long before a television show of the same name. When he died in 1996, Sterling compared him to “Sinatra, or Crosby, or Astaire.” Rivaling Mel in the ferocity of pro and con opinion, John has become the pinstripes’ radio paradigm—a fact that some do not wish to grant but in all fairness should.

To some, Sterling has always flaunted condescension. He also works in the shadow of the Bombers’ grand broadcast past. While fewer today follow baseball on radio than TV, those who do are passionate, often arbitrary. Moreover, few are neutral about John’s team, the New York Times writing, “It is impossible to think of any other franchise like the Yankees”—witness 40 pennants and 27 world titles. Still, Sterling warrants reappraisal. At 83, his durability wows, once working 5,060 straight games before an eight-day break. Weaned on Broadway, like 2005-21 wireless partner and once-actress Suzyn Waldman, John learned My Fair Lady’s “I’ve Grown Accustomed to His Face.” Many have grown accustomed to him, finding his play-by-play now more vibrant than arrogant. In theory, any baseball listener should welcome reappraisal.

Churchill said, “Give us the tools, and we shall finish the job.” John’s include that silken, elegant voice—possibly baseball’s best—and knowledge, anecdotal zest, and historical memory. Early jobs included WMCA radio, Morgan State football, and the hockey Islanders and hoop Nets. “Give it to Julius [Erving]!” he shouted in a playoff game. In 1983, Sterling left Bullets basketball for Braves radio and TBS Superstation TV. Five years later “It was time to move on,” but where?

The 1961 Cubs’ College of Coaches rotated skippers. In 1989, Sterling became the 17th in a decade-long rotating door of radio/free and cable TV mike men to transmit the Yanks. Soon he, Rizzuto, Joe Angel, Kubek, Tom Seaver, DeWayne Staats, and Al Trautwig shared color/play-by-play. “The result,” said Tony, “was that no guy really dominated the rest”—also that except for Scooter, no one seemed their Voice.

For Sterling, the public’s true laying-on of may have come July 19, 1999, David Cone pitching one-up-and down and with Don Larsen in the yard. In the ninth, “He popped him up! He’s going to get it! [Scott] Brosius down from third!” John cried. Pointing skyward, Cone grabbed his head in disbelief. “Ball game over! A perfect game! … A perfect game for David Cone! Twenty-seven up! Twenty-seven down! David Cone has attained baseball immortality!”  At that moment, he seemed a successor to an historic broadcast legacy. That fall, New York again met Atlanta, the supposed “Team of the Decade.” “The Team of the Century” swept. The usual suspects took the usual parade down Manhattan. Said manager Joe Torre: “This stuff never gets old.” In 2000, the Mets and Yankees held something new: the first Subway Series since 1956. Game Five ended with “Bernie back! Away back! … He makes the catch! Ball game over! World Series over!”—the Yanks’ third straight title and fourth in five years.

wDueling extroverts. Kay cried of a homer, “See-ya!” John replied, “It is high! It is far! It is gone!” Later, each told Newsday they regretted not filing with the U.S. Patent and Trademark Office to trademark each call—also “Theeeee Yankees win!”—for use on T-shirts and sweatshirts. In 2001, Arizona’s Luis Gonzalez’s Game Seven Series bloop precluded “TYW!” Next year, Kay began play-by-play, the Center Stage talk show, and other programming on the new “Yankees Entertainment and Sports (YES)” TV Network, John hosting its Emmy Award-winning series Yankeeography. In 2003, the curtain rose on more Emmy-deserving lore.

That October 16, Game Seven of a scorched-earth LCS passed midnight at Yankee Stadium. In the 10th inning, Aaron Boone, a future Bombers skipper, arced Red Sox reliever Tim Wakefield’s five-all pitch for a pennant-waving blast. John’s 2002-04 partner Charley Steiner—engaging and provocative: a made-for-baseball iconoclast—called the homer: “And the Yankees are going to the World Series for the 39th time in their remarkable history!”

Unable to desist, Sterling bayed, “Theeeee Yankees win!” A city caroled every syllable. “I’d rather do my own thing,” John said later, “than be a strait-laced, homogeneous, play-by-play drone.” His “thing” tied songs and bywords: Hideki Matsui prompting “a thrilla’ by Godzilla!”; Mark Teixeira, “he sends a Tex-message”; an Alex Rodriguez belt, “an A-Bomb from A-Rod!” Back-to-back homers, especially by left- and right-swingers, evoked Harry Bellefonte’s “Zombie Jamboree”’s “It’s back-to-back … and belly-to-belly!”

Hosting one episode of Yankeeography, Sterling narrated the life of the Yankees’ 1940-64 Voice. “Listening to Mel,” he said on occasion, “I knew this was my life.” Many preferred hearing Allen to being at the park. Others prayed that laryngitis would silence him forever. By any measure, he may have sold more cigars, cans of beer, safety razors, and Americans on the pastime than any announcer who ever lived.

Like Mel, Sterling became the Big Apple’s largest baseball announcer—over the top or the rainbow, said the Daily News: “The Voice some love, and some love to hate.” Such a Voice seems perfectly congruent with his franchise, despite it not winning a World Series since 2009, yet still a surpassing presence. In 2019, John became the first Voice to call games from Europe, bringing his lilt to London Stadium.

“[Their] image,” wrote a columnist of Sterling and partners Kay, Steiner, or Waldman, “[is] two friends who … happen to be spending the day at the park.” An Ohio writer said, “In a perfect world we’d all be Yankees.” Our world is not perfect. Neither is Sterling. He is, however, perfect for New York.