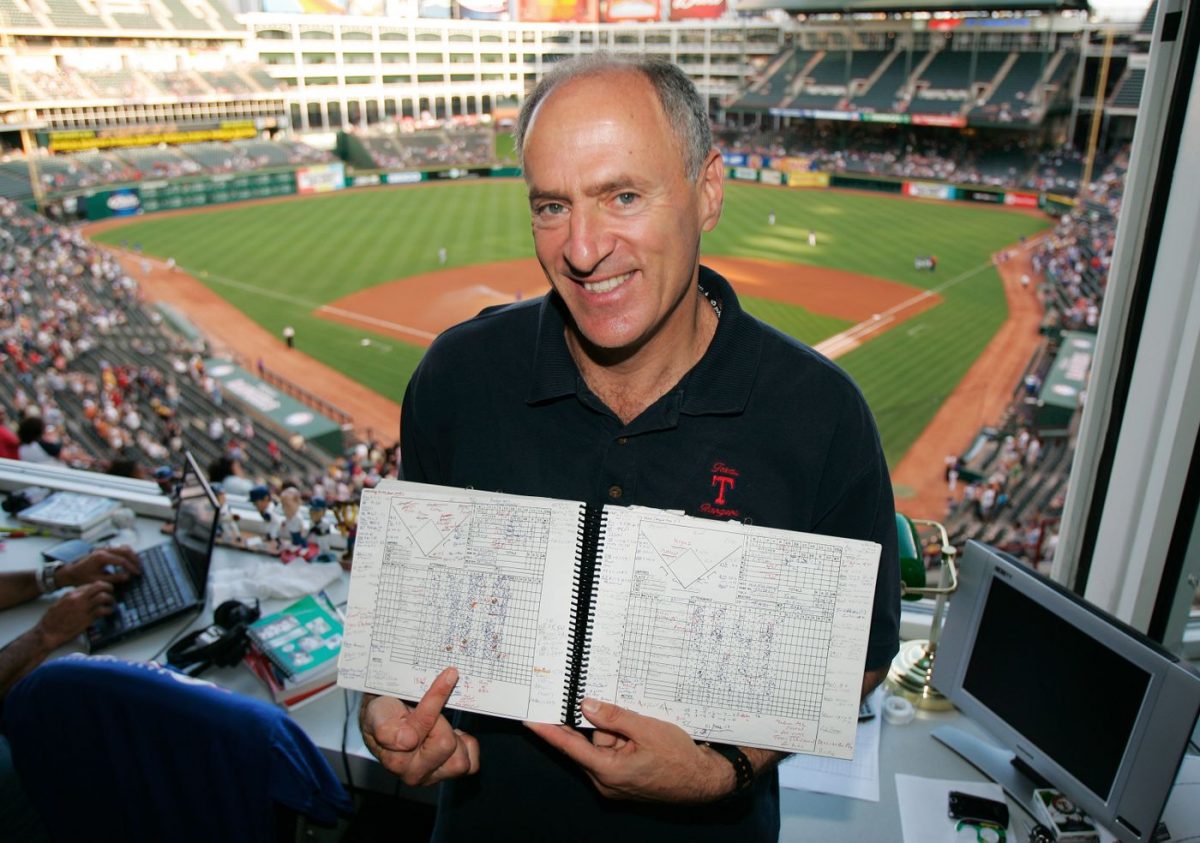 Eric Nadel, popular Voice of the Texas Rangers. He started with the team in 1979

This week, I had an opportunity to talk with the colorful Ken Harrelson, who called White Sox games on television for 35 years. We covered a lot of ground from the game to the booth.

In talking broadcasting, I asked him to name some of today’s best MLB announcers. The first name out of his mouth was Eric Nadel. Before I could even ask him why, Hawk enthusiastically told me that one of the best acceptance speeches he ever heard by a Ford Frick winner was the one delivered by Nadel who won the Hall of Fame’s coveted broadcast award in 2013. Harrelson told me a chunk of the acceptance speech was given in Spanish.

A good while ago, Nadel recognized the fact that baseball talent sprouts in many Hispanic countries. Further motivated by the arrival of Ruben Sierra, Nadel studied Spanish and became fluent in it.

Eric is a Brooklyn boy who celebrated his 68th birthday yesterday, May 16th. Nadel  grew up loving hockey. He would listen to New York Rangers games on the radio as described passionately and emotionally by Marv Albert.

While he broadcast some minor league hockey early in his career, it was baseball where he made his mark. Nadel started with the Texas Rangers in 1979. This is his 41st year with the ballclub.

Then again, when you hear Brooklyn, you don’t think tranquil, serene and relaxed. They’re not the words that come to mind first. Nadel though presides over the microphone with an unrushed conversational ease. Texas fans feel they’re listening to a friend at the ballpark.

And Eric is as honest and transparent as the Dallas summer days are steamy. If there’s something that troubles him about his working conditions it’s the growing number of more difficult vantage points. He says, “More and more, ballparks are putting us up so high where you can’t see players’ faces and body language. It’s very hard to judge the ball off the bat. I don’t feel like I am in the game and as a result, the job is no fun. At this stage of my life, if I am not enjoying the job, I won’t be doing it.”

I had an opportunity to do a questions and answers session with Eric.

You are a New York boy. You loved hockey growing up. How did you end up broadcasting baseball?

I was in the right place at the right time. I was the radio voice of the Dallas Black Hawks, the top affiliate of the Chicago Black Hawks and Toronto Maple Leafs. In the spring of 1978, the parent clubs decided to move the team to Moncton, New Brunswick, leaving me without a job. Out of the blue, I got a call a week later from the Texas Rangers, telling me they were looking to hire a young announcer to eventually replace an older announcer who was planning to retire.  They were also looking for someone to sell radio and television spots. I told them I would do both jobs if they hired me. Since I had never broadcast baseball, they let me do a four-game audition into a cassette recorder and they hired me based on the tape.

You did a little television at some point with the Rangers. Do you prefer radio over television?

Television is no fun for me. You don’t get to describe things, and that’s the part of the job I love the most. I also love my freedom on radio, which I never had on TV because of the need to talk about what the viewers are seeing. I refuse to wear a sport jacket at a baseball game and that’s an issue too. And I would hate to miss broadcasting the post-season when the team I am working for makes it. On TV, when the regular season ends, you are done for the year as the national guys take over.

More so today than ever before, announcers are working abbreviated schedules. Do you feel that to build bonds with fans, it’s important for announcers to work every game?

I now take off 22 games each year and that will increase dramatically if I keep doing this for much longer. Yes, it’s important to forge that bond early in your time with a team, and the more games you do, the easier it is to make the audience comfortable with you. But for guys like me who have been with a team for decades, it’s more important to stay fresh and not get burned-out.

Are you concerned about the future of baseball? The game’s ratings have been slipping steadily. Younger fans are not as connected to the game as the youth was of previous generations.

I am very concerned. The game has no rhythm as a result of pitchers taking too much time between pitches and batters being allowed to step out of the box.  Baseball desperately needs a pitch clock. Anyone who has seen minor league games played with the clock is well aware of this. There’s just too much time in MLB games when nothing is happening. And with the analytics-emphasis on home runs and walks, and the increased strikeout rates, the ball is not in play as much, so there are not exciting plays on the bases and interesting happenings on defense.

Are you concerned for the future of baseball on radio?

No, I think baseball fans will always want to follow their teams wherever they are when a game is played. That’s the magic of radio, especially with the ability now to listen to the broadcasts on smartphones and computers. And there will always be fans who prefer more descriptive radio audio to captioning television audio.

Growing up, who were the fellows you listened to and who inspired you?

I remember asking my dad, when I was about seven, whether Mel Allen and Red Barber were getting paid to broadcast the Yankees games. I loved those guys, but we didn’t like the Yankees (having been Brooklyn Dodgers fans). When the Mets were born in 1962, I became an avid fan and I adored Lindsay Nelson, Bob Murphy and Ralph Kiner (the three were together for 17 years). They were so friendly and sounded so happy to be there, and made the Mets players sound like they actually belonged in the big leagues.

When the NHL finally arrived in Dallas in 1993, were there any thoughts, even if they were far-fetched, of trying to get the gig to do hockey?

Yes, but by then I had been doing Texas Rangers baseball for 15 years and felt that I was pretty well accepted. I loved the baseball job but might have given it up for a long NHL contract with an established team. It seemed risky to consider giving up the MLB job for an NHL job with a transplanted team that might not work out long-term. But my goal was always to be the voice of the Rangers…the New York Rangers!

The Red Sox radio broadcast this year will have as many as 12 announcers calling the games. Is that a bit much? What does it do to the connection factor with fans?

I am not a fan of the way they are doing it. But I would have to listen regularly before I say it can’t work. Joe Castiglione is a treasure and his ability to work well with everybody should ensure that it always sounds good. The other play-by-play guys are all terrific…..Josh Lewin , Mario Impemba, Sean McDonough and the others…I love all their work.

What makes your style distinct?

I am a very conversational announcer. I don’t have the type of big voice to make many of the highlight reels for dramatic calls. But I think I connect with the fans on a personal level through my descriptions, observations and humor. It’s very personality driven…I liken my style most to that of the late Hank Greenwald, but I also learned a ton from my first partner Jon Miller and from my long-term partner Mark Holtz about how to connect with the audience.

Of the managers you worked with over the course of the years, who was the easiest to work with and who was the most difficult?

Our current manager Chris Woodward is a dream and Ron Washington was similarly laid back, which makes my job easier. Some of the more high strung managers were sometimes defensive and difficult, but I learned a ton of baseball from them, Bobby Valentine and Buck Showalter specifically. Those guys are brilliant and we learned to work well together. I value both their friendships tremendously.

Joe Angel retired prior to the season. The legendary Marty Brennaman will be retiring at the end of this season. Hawk Harrelson hung it up too. Then again, the incomparable Vin Scully went to age 88. You’re 68. How long do you want to go?

It depends on whether my employers are okay with my taking off an increasing number of games to be able to do things other than baseball during the spring and summer. 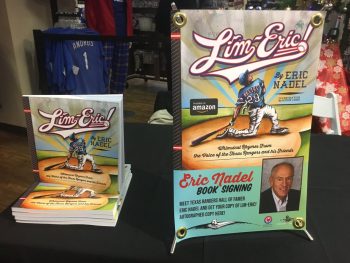 Do the younger announcers today, coming up in radio in particular, have a sense for the rhythm, the timing, the storytelling and other requirements of calling baseball?

Yes, I think they do. I get a lot of broadcast samples from minor league and college announcers and they are almost always very good. They reach out to MLB announcers for feedback all the time.  The ability to listen to announcers at every level gives these young guys a much better idea of how it should be done. When I started. I had to really try to hear games from other cities on distant signals. Now you can hear over 100 baseball broadcasts on any given night.

Here’s an example, one that tells Eric’s story of growing up in Brooklyn and losing the Dodgers to California:

My childhood team was the Dodgers,

With Snider and Koufax and Hodges.

They came out to LA

With intentions to stay,

And that still bugs us Brooklyn old codgers.