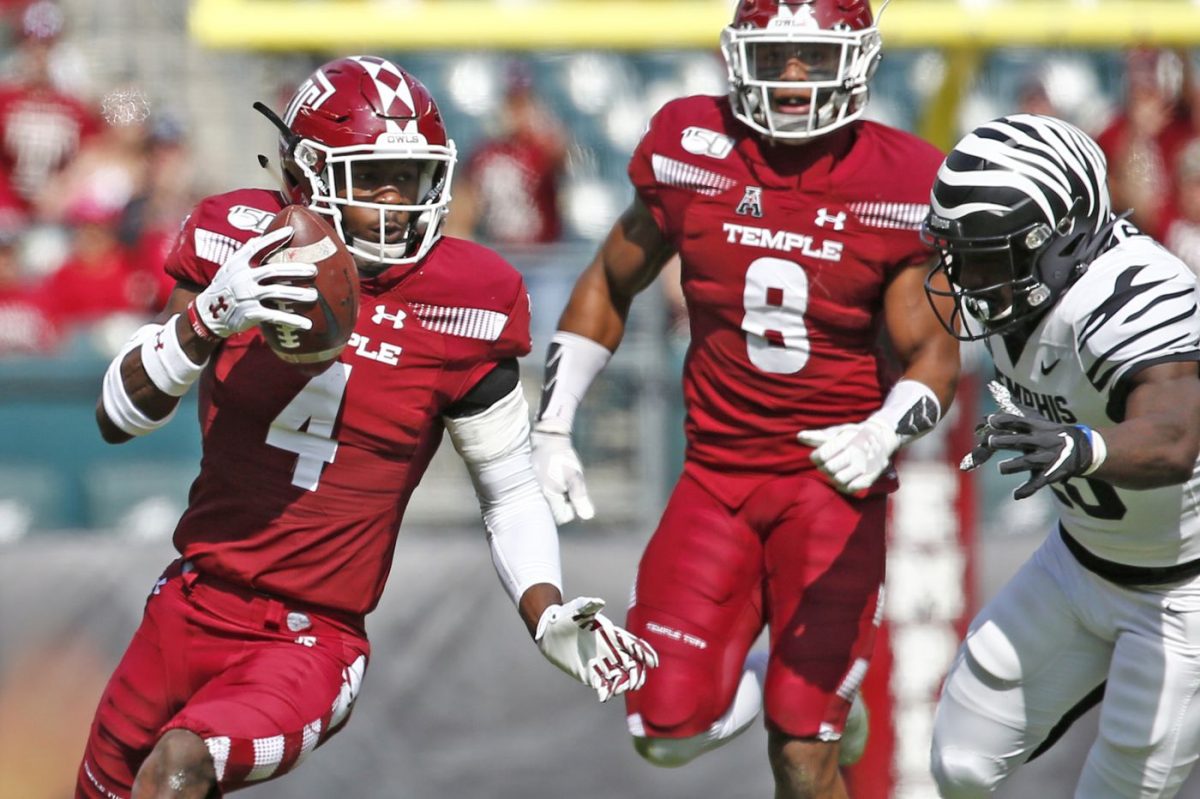 The names Anish Shroff and Ahmad Brooks may not be that familiar to most college football fans, but after just one sampling, this fan can tell you they are a compelling listen, and have star-quality potential.

Why, because they listen and react to each other and mostly because they’re honest with their audience. What a refreshing change! Shroff has a strong voice and is on top of every situation. Brooks is colorful, and anticipates what an offensive or defensive coach is up to. Simply put, they are fun to listen to.

Last Saturday they were working a very entertaining game on ESPN 2 between home team Temple and Memphis. Temple led 30-28 late in the fourth quarter when Memphis seemed to complete a fourth-down pass that would have put them in easy field goal position to win the game. The receiver rolled over after the catch but repeated reviews showed no reason to reverse the call.

When the referee announced that the call was reversed and that Temple took possession, everyone seemed stunned including Shroff and Brooks. Then Shroff asked a question of Brooks: “Do you think Temple has a unique home-field  advantage playing at Liberty Financial Field?”

Brooks wasn’t sure what he was getting at but then Shroff made clear what he had found out. “The replay (that showed the ball hitting the ground) came from the Jumbotron. No other camera angle had it. The operator sent it up to the review official and the call was then reversed.”

“Wow!” was Brooks’ honest reaction. He seemed doubly shocked. It capped a great day between the two, who had paid their dues in the broadcasting business to get this point. Anish was one of three finalists back in 2004 for ESPN’s Dream Job contest when he was a student at Syracuse. He took jobs as far away as Yakima, Washington before ESPN officially hired him in 2008.

Brooks has been a team leader all of his life. Quarterback of his high school team and president of his class, he was Mack Brown’s first recruit at Texas in 1998 and became the team captain along with Major Applewhite. After a brief NFL career he worked for Texas’ Longhorn Network and Fox Sports Southwest from 2006-13 before joining ESPN.

It may have taken Shroff and Brooks a while to get to this point at ESPN, but it shouldn’t be long before the network starts featuring them on bigger games.

Buck and Smoltz Need to Take a Breath

After listening to Joe Buck and John Smoltz for nearly four hours Tuesday, broadcasting Houston’s 4-1 win over the Yankees, I’m exhausted. They seemed compelled to not have any dead air between pitches. Buck especially kept throwing stats at us as if they were hand grenades, except many of them were in one ear and out the other. And Smoltz, who is generally good on pitching strategy, kept at it whenever Buck seemed to catch his breath, mostly with obvious things. Please Fox, have them take a breath once in a while. We need a chance to think about what they are saying, too.

Editor’s Notes: With the rain out yesterday, Joe Buck had an opportunity to head out to Denver for the Thursday night NFL rivalry game between the Chiefs and Broncos. Joe Davis, the Dodgers’ television announcer will fill in and call game #4 and Buck is due back on Friday night for what will be game #5. Buck isn’t scheduled to call Sunday football so that he can be available for the ALCS

According to Sports Media Watch, the Yankees-Astros series is averaging 5.79 million viewers through two games on FOX and FS1, per Nielsen fast-nationals . That’s up 1% from last year on TBS (Astros-Red Sox: 5.74M), but down 6% from the same matchup on the same networks in 2017 (6.19M).

Of the tens of college football games last weekend, and there were at least 60, only five matchups did a rating better than a 2.0. Only ten got a registered rating. Fifty of the 60 were below measurement. The highest rating last Saturday was a 4.5 for the Texas-Oklahoma telecast on Fox.

So I was listening to one of the wonderful Pat Hughes “Baseball Voices” CD’s, of Red Barber. On several of his major calls, he would say, “We’re going to let you listen to the crowd.” Ernie Harwell said when Detroit won its first pennant in 23 years, “Let’s listen to the bedlam here at Tiger Stadium.” Vin Scully was silent for more than a minute after the Kirk Gibson homer, and Jack Buck made his famous announcement on radio twice–“I don’t believe what I just saw!”–and then got out of the way. Those guys could stand to learn from the… Read more »