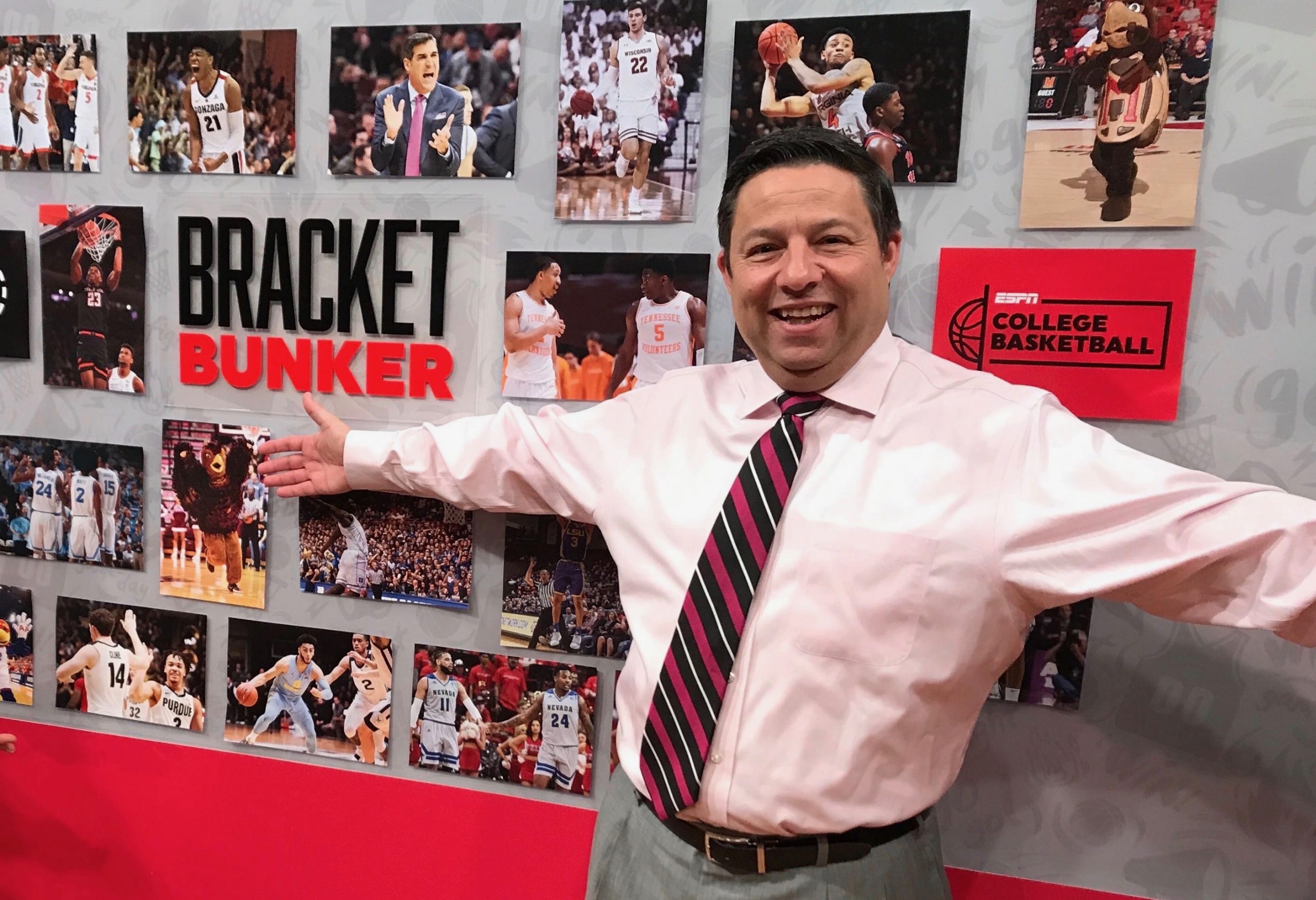 ESPN's Joe Lunardi is the progenitor of what's become a cottage industry, Bracketology.

No man in the business is better recognized for predicting NCAA Tournament-bound teams than ESPN’s Joe Lunardi. Though Lunardi stands five-foot-five and struggles to dribble with his left hand, he exhausted his elite basketball knowledge to predict all but one NCAA Tournament team in 2019. 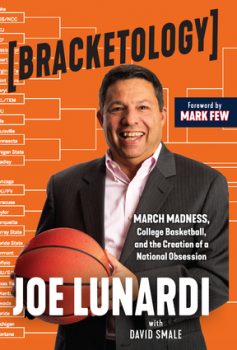 The birth of “Bracketology” began in one of college basketball’s most historic venues, The Palestra in Philadelphia. Lunardi was a journalism student at St. Joseph’s with a minor he says tongue in cheek, in college basketball. With the arena housing five Philadelphia schools, Lunardi took advantage of being granted a press pass to watch Big East schools in their heyday like Georgetown and Patrick Ewing and Jim Boeheim’s Syracuse team two to three times per week.

Watching these teams stimulated Lunardi’s love for the sport—particularly the NCAA Tournament. “After my work as a student reporter, I became a stringer for the Big Five (Villanova, St. Joseph’s, Pennsylvania, La Salle and Temple) and those opportunities galvanized my love for college basketball and the NCAA Tournament,” Lunardi told us. (Lunardi on the front cover of a book he recently penned, aptly named [Bracketology] on how he grew this craze,  [Bracketology]).

“In the late ‘80s and early ‘90s, I became the editor of the Blue Ribbon Yearbook, which was the Bible for college basketball. We added a postseason guide in 1995, and for the book to do well, we had to predict the teams that weres doing well, so we covered 80 teams and could not afford to be wrong.”

The release of the preview guide opened the door for Bracketology and forced Lunardi to make educated guesses on which teams would make the NCAA field. The project caught the interest of ESPN and in 1996, Lunardi agreed to make 64-team projections in exchange for advertising inventory on ESPN to promote sales of Blue Ribbon.

While Lunardi loves the work, the tournament can be demanding come March, forcing him to work strenuous 16-19 hour days. “Crunch time usually starts right after the Super Bowl, in part because of the demand externally,” Lunardi said.

“I don’t really have free nights by the time February comes—I’m tracking basketball games and now I’m getting paid for it. It’s flattering, exhilarating and exhausting.” Lunardi’s workload lessens once the tournament starts, as he receives the biggest reward of all for his services–watching the tourney’s games. Lunardi receives leisure time following April’s Final Four, allowing him to enjoy one of his favorite hobbies, “playing bad golf,” he says.

“I can score 68 in Bracketology, but can’t say the same for my score on the golf course,” Lunardi said with a chuckle. Not even Lunardi could have projected the lasting impact of COVID-19 on not only his job but the entire landscape of college basketball. Due to safety concerns, ESPN is limiting in-person attendance, at its office, so Lunardi’s current “bracket bunker” is in his home in Ocean City, New Jersey.

While the pandemic has affected a lot of work for media members, Lunardi is grateful he can do all of his work remotely. “For me, it’s been a painless adjustment because most of my work functions can be replicated remotely due to technology,” Lunardi said. “It is far more demanding for the players and the coaches in isolation, getting scouting reports carried to their dorms by managers, getting tested before the game by people in hazmat suits.”

Lunardi was one of the first to experience the complications associated with the pandemic last year. He was doing color for St. Joseph’s Atlantic 10 Tournament opener against George Mason. As the news broke, Lunardi was faced with the decision of returning home or back to Bristol, uncertain if the tournament would be canceled for the first time. Lunardi did SportsCenter that night with ESPN’s Scott Van Pelt trying to make sense of the situation. “The NBA was blowing up and things looked bad. The next thing you know is it was over and SVP and I consoled each other,” Lunardi said. “I traveled home that next morning, and have been home ever since.”

The pandemic ultimately canceled the tournament, Lunardi understood the decision and with a glass half-full approach, is grateful there was even a 2020-21 season. “To me, the fact that we had a season and roughly 4,000 games played, when typically, there would be 5,000 games, and have March Madness be the first thing to go last year, make a lot of people reflective because of that. I’m thankful,” Lunardi said in a recent PhillyVoice article.

While we are thankful for the season, there have been some hiccups in playing during a global pandemic. Many schools have been impacted, forcing cancellations and long stretches without games due to an outbreak. When the regular season ended, teams finished with an uneven number of games played.

Teams like St. Louis, that went 42 days without a game, have been impacted. Lunardi is relieved that the NCAA Tournament Committee is ignoring speculation while seeding teams, the decision that makes the most sense. “We can drive ourselves crazy and speculate.. but at the end of the day when it’s this complicated we need to make it simpler,” Lunardi said. It’s not fair and not perfect, but it’s the only thing that makes sense.”

After the official bracket was released last night by the NCAA, Lunardi had 67 of the 68 teams selected. He missed Wichita State.

While Lunardi get the most face time, ESPN has a bracketology for women too, Charlie Creme. Fox Sports which has exclusive rights to the Big East and other team and CBS Sports also have their own bracketologists, Jerry Palm works for CBS and Michael DeCourcy projects FOX’ brackets.