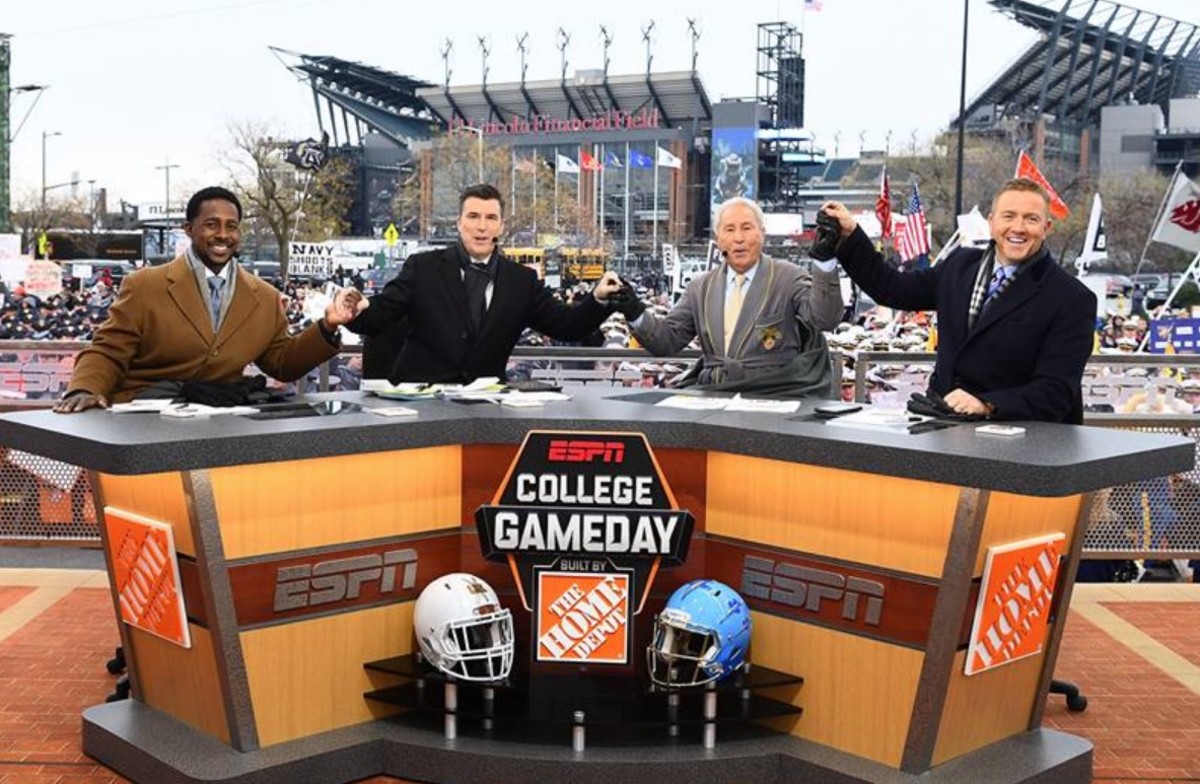 Remember the last time President Trump attended a game between highly ranked college football teams? If you don’t, it was last November 9th. The matchup was about as big as it gets during a regular season, #2 LSU vs. #3 Alabama in Tuscaloosa.

It was a CBS game. Yet ESPN was also in Tuscaloosa that Saturday. The Bristolites were hosting their award winning and decades old show, College GameDay.

The program first aired in 1987 with Tim Brando as host and Lee Corso and Beano Cook as commentators. Cook gets credit for not only the idea but for pushing for internal approval of it at ESPN. This is 33 years ago and Howard Katz, a top ESPN executive at the time, was concerned about the logistics of moving the set on a weekly basis.

The show’s managing producer Lindsey Lloyd told us this week that when Trump flew into Tuscaloosa, the ESPN College GameDay crew had to adjust on the fly. “That [Trump’s arrival] shut down airspace in the area, caused us to rearrange things and redirect our plane of personnel to a different airport than anticipated. So, yes. There are hurdles, there’s a lot of stuff behind the scenes that people will never know happened,” she said.

“People?” Yes. Millions each week watch GameDay. The show that Saturday in Tuscaloosa featured golfer and Alabama alum Justin Thomas who was the guest picker. Protagonist Lee Corso who’s been with GameDay since its launch in 1987, ended the program as he always does, picking the winner. Corso did so donning the mascot headgear of the Tigers while holding onto an LSU-themed long sleeve shirt with Corseaux imprinted and sewn onto the back.

The Corso headgear moment is a rite of passage of sorts for fans before they settle into a full day of football. ESPN’s audiences also take in smooth Rece Davis, slick lipped Kirk Herbstreit, charismatic Desmond Howard and the bold David Pollack. In recent years, ESPN’s growing star Maria Taylor has also blended in nicely . And how can we forget the unpredictable Pat McAfee!

There are many happenings behind the scenes that are vital to GameDay’s success or failure.

We had a chance to talk with both Lloyd and Judi Weiss, a senior remote operations producer for ESPN. They were kind enough to spend some time with us in the days leading up to the national championship game in New Orleans.

Lindsey Lloyd: It’s all about the fans, just getting the turnout. The early representation of fans coming full force with signs and just really bringing their energy is the game changer for our show.

Judi Weiss: It’s the energy and location. If people really believe in the spot we choose, if the local fans are engaged – like a Fargo or a Beale Street – or when we go to Old Main Lawn at Penn State— it resonates with  fans. That’s what makes the show great.

When people believe in something, they definitely show up. That’s really our goal—to make sure that we’re tapping into what local fans want, as well as what the viewers at home want to see.

What are the best College GameDays you have experienced?

Lloyd: Washington State was hands-down one of the best experiences of my career.

(For those not familiar, the Washington State story is heartwarming. It was about an ongoing campaign to urge GameDay administrators to schedule a Saturday show in Pullman. The effort began in 2003 and was initiated by school alum Tom Pounds. He showed up at a game in Texas with the school flag, dubbed, ‘Ol Crimson. He waved it and the flag got attention. The following week he shipped the Washington State flag to Wisconsin where too it was visible. Eventually, the school booster club undertook the effort and shipped the flag to wherever GameDay was scheduled. It appeared on GameDay for years, hundreds of consecutive times.

Getting there was absolutely incredible, given the history of the flag, Ol Crimson, and the 15 plus years it took to make it to campus. You saw people at Washington State crying, just because we were there. I had strangers come up and hug me, shake my hand and thank us for coming. You just can’t compare that to anything.

As far as this season is concerned, I would say Memphis. Obviously, any time we go to a location for the first time, it’s an experience like no other. And taking the show to a downtown atmosphere versus a campus atmosphere is sometimes risky. But just as they say, no risk, no reward. Downtown Memphis was an epic scene to say the least, seeing fans of all ages come out there. There were people 60-plus years old at 3 o’clock in the morning ready with their sign. That’s what this show is all about.

How do you pick where on campus you want to hold College GameDay?

Weiss: I’m not the only one who’s involved in that. That’s really the show’s director. It’s an aesthetic, and it’s where we’re going to draw people to come to the show. Obviously, space is a consideration because the show is really large. And we want to accommodate as many people as possible. We also make sure that the location is special. It has to be important to fans and the folks from the school.

Lloyd: He’s very meticulous in his way, extremely buttoned up with everything that he does. He’s just big on staying on a very regimented schedule.

What are some issues you all have run into as you travel the country?

Weiss: When we did the 2018 SEC Championship, we had thunderstorms overhead within 10 minutes of going to air, so we had to move inside. We always have a rain plan. But the rain plan is usually in place in case of lightning or high winds. And you hope maybe the weather cell will push through and that we will be able to go back out onto the set.

We did almost three hours of TV from inside the Georgia World Congress Center. For viewers at home, it was almost as though they didn’t know the difference. We were able to work with our SEC partners and use some of their stage locations inside. And through Bristol, we were able to get connectivity and work out other issues. When all was said and done, we were able to produce an entire show, one almost completely improvised, It was probably the most challenging show not only from a tech operations standpoint, but from everybody’s standpoint.