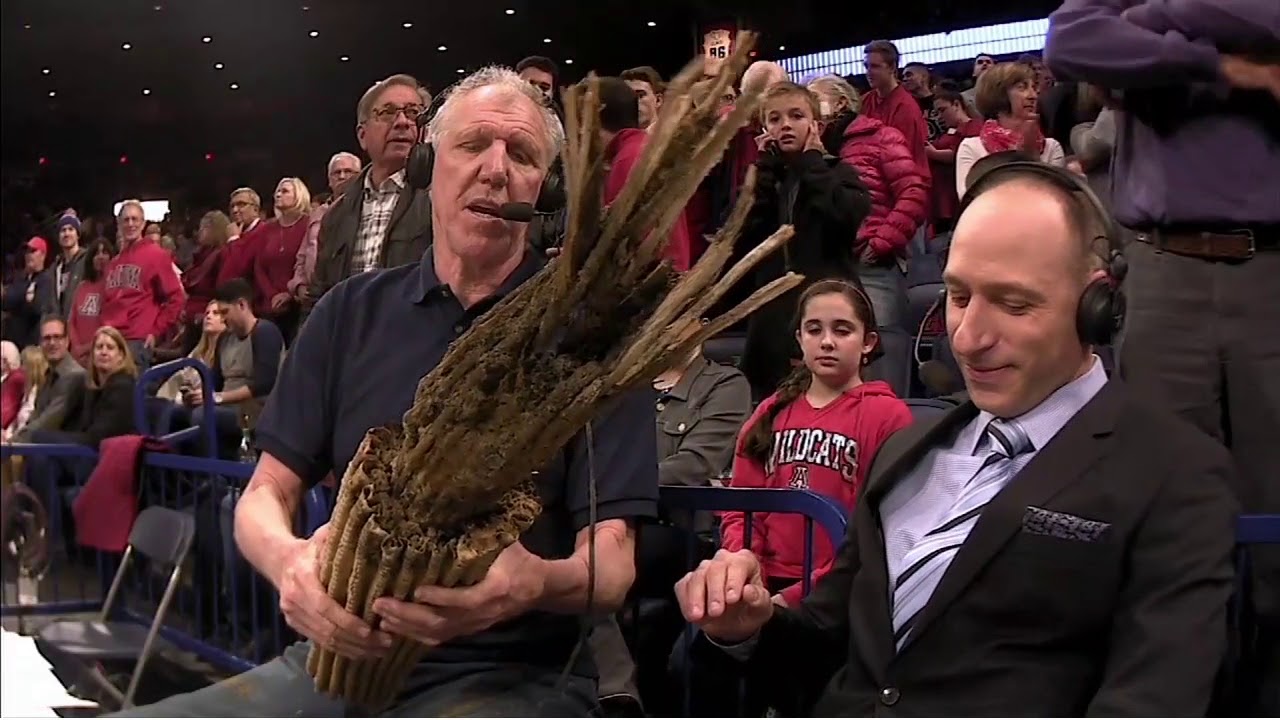 The irreverent and once terse Bill Walton with straight man, Dave Pasch

Stop if you’ve heard this before.  An aspiring sports broadcaster attends the Newhouse School of Communications at Syracuse University, makes his way through the countless number of aspiring student announcers there; then somehow ends up at the mothership ESPN, making a name for himself.

If only it were that easy. Dave Pasch’s story was different from that of Bob Costas, Mike Tirico, and Sean McDonough. The latter three were raised in the Northeast and Syracuse was always on their radar. They were well aware of the school’s sterling reputation training broadcasters and its track record for turning out notable alumni. Marty Glickman was one of the early grads who excelled; followed a couple decades later by a couple of his proteges, Marv Albert and Dick Stockton.

Dave Pasch was a kid who really fell in love with Syracuse from afar; developing a connection with its storied basketball program from his home in Wisconsin. He figured hey, why not apply and see if I can watch games up close in the Carrier Dome. Of course, up close is a debatable description when watching games in the dome.

Pasch has developed quite the versatile reputation; and has become increasingly well known for covering late night West Coast college basketball games with Hall of Famer Bill Walton. If that alone is not daunting, he continues his longtime duties voicing the radio broadcasts of the Arizona Cardinals.  Pasch does more too; including ESPN’s NBA and college football telecasts. If it’s a fall Saturday night, Dave’s likely on a plane getting from the college game to the NFL gridiron for a Sunday Arizona Cardinals broadcast.

He and I had a chance to get acquainted recently. What fascinates me and I’m sure others too is what it’s like each week to team with the iconoclastic Bill Walton. For many viewers, the partners have become must watch television. Others might be dismissive. One thing for sure. Dave and Bill form a colorful duo; part of which is not knowing what to expect from one broadcast to the next.

Your first college basketball game of the season with Bill Walton turned into one of the best games of the young season, Gonzaga hosting Washington.  Good to be back?

Absolutely.  It was great.  Working with Bill is so unique.  I hadn’t done a game with him in nine months.  It’s a little bit of an adjustment!

You spent a lot of time at Syracuse.  What was it like to follow in the path of so many broadcast greats who studied at Newhouse?

I grew up in Madison, Wisconsin and really knew nothing about Syracuse other than it had a great basketball team.  When I was in high school, Syracuse was on TV all the time and I loved Dick Vitale and also listened to play by play guys like Mike Patrick and Sean McDonough do major games. I became a huge college basketball fan as a result of watching Vitale and Syracuse.  I loved the way the Orange played, Sherman Douglas throwing alley-oops to Derrick Coleman. It just really piqued my interest.  I wanted to get into broadcasting and I’d hear Vitale talk about all these great announcers who went to Syracuse. So I researched it a bit more and Syracuse seemed like a natural fit then; a time when broadcasters Bob Costas and Marv Albert were in their heyday.  I remember being in an auditorium with what seemed like a thousand kids and they all raised their hands when asked who wanted to broadcast SU games.  I was like oh boy maybe I’m in the wrong place.  It was eye-opening.  It seemed like everyone who went there wanted to be a sports broadcaster and it wasn’t about sports talk-radio then.  It was about play by play and there was so much competition.  Other major influencers of mine were Dick Stockton and Marv Albert.

Do you think it’s possible for another Vitale to come along in this day and age, create his own identity and stick for 40 years of shtick?

In terms of uniqueness, I’d say Bill Raftery was right there with Dick and I’ve done games with both.  In answer to your question, I’m not sure we’ll ever see another Vitale, Raftery or Walton. You can’t fake it. These guys are so genuine and natural in what they do.

On that note, what are the challenges in a business with so many games available? What viewer habits have changed?

Your ballgame with Gonzaga and Washington was interesting.  Tie game, 6 seconds left.  Usually the play by play guy is running the show in a situation like that. Yet, you deferred to Walton in that critical situation.  Can you give us some insight?

Bill was talking as Gonzaga brought the ball up the court; making a point that the Zags were wasting time. But you’ll notice he stopped immediately as soon as the ball went into Rui Hachimura. I jumped in then to the call the game winner. Does he cut it a little closer than other analysts?  I suppose, but it is what it is.

How much interaction between you and Bill on game day?

It’s completely spontaneous.  When we first started, he told me that in the 13 years he and Ralph Lawler teamed on LA Clippers telecasts, they said nothing to one other before a game.

On game day we just don’t engage. Bill views me as his nemesis, like I’m his Kareem.  Even though I’m a teammate, he views me as his enemy. He doesn’t interact with me at all before a game.  Bill keeps things to himself as to what he’s going to get into during the game.  In fact, we huddle up with our producers independently; it’s totally fresh.  Bill is so appealing, especially to this younger generation which is so fascinated by his comments you’d never hear by others on a traditional broadcast.

You do both college and NBA.  What’s the difference?

There are tons of diehard NBA fans who follow the NBA closely. I have to know all the major storylines around the league and I can’t lose sight that it’s still entertainment. There are more anecdotes you can sprinkle in during NBA games as opposed to college where the game is shorter and every possession is more cherished.  It’s harder to talk through possessions in college where in the NBA you have a little more time.

Versatility.  You cover the NFL’s Cardinals on radio. Tough to transition back and forth between football and basketball this time of year?

This is my 15th year doing college football for ESPN and 17th as play by play voice of the Cardinals.  I’m used to it and there’s really no magic formula although going from radio to TV, I have to make sure I don’t talk too much.  I remember Bob Costas once telling me that if you feel like you’re not talking enough, you’re still probably talking too much.  Too much talk is such a turnoff for viewers.  I think Kevin Harlan does such a terrific job of painting a picture and certainly it’s a balance going from radio to TV.

How hard is it covering a struggling team like the Cardinals?  Yes, you have a job to do but is it tough when the season is a grind?

Absolutely. When your own team is losing it’s tough. You’re a fan. At ESPN, you’re not.  When things aren’t going well, it’s not as enjoyable. It’s not hard to get up because you’re still doing the NFL. But talking for 3 hours about how poorly the team is playing or what’s ahead in the off-season is a challenge.

Any assignments independent of play by play that interest you down the road?

I’ve never really had an inkling or desire to host.  A college Game Day type deal would be interesting but I would say that Rece Davis should do that for life.  I just love doing games, being part of the environment and documenting history being made.  Yet, I would love to do golf on TV.