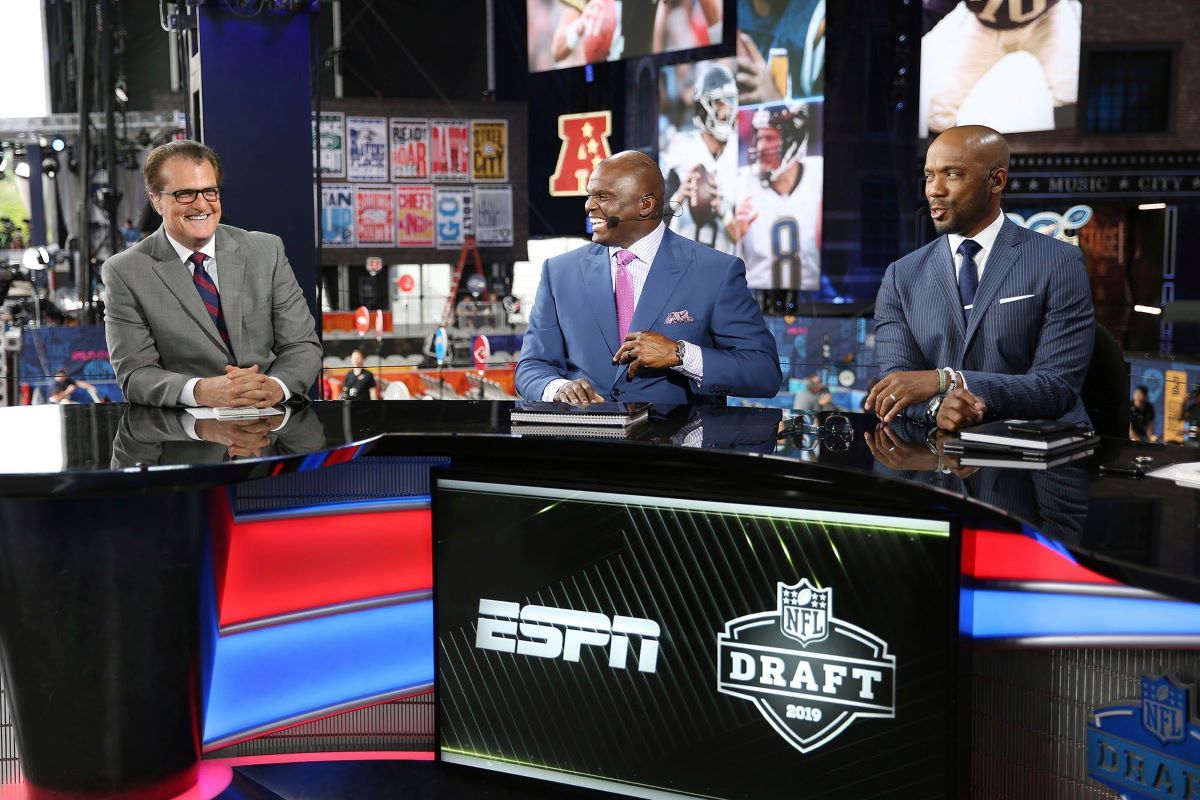 Mel, Kiper Jr., Booger McFarland and Louis Riddick presided over much of ESPN's coverage of the NFL's draft

Coming into the opening night of the draft,  it was a foregone conclusion that Jacksonville would pick Clemson quarterback Trevor Lawrence, the Jets would go with QB Zach Wilson and that the 49ers would also take a QB, picking third. We just didn’t know whom. And from there, the dominoes would fall. The Niners wound up taking Trey Lance from little North Dakota State.

The ESPN team of Mel Kiper Jr, Louis Riddick, Booger McFarland, and new host Mike Greenberg shared what they expected most on night one of the draft. Kiper, who’s been ESPN’s draft expert for decades said he wanted to see what would happen to the two QBs outside the top three, Justin Fields and Mac Jones. Riddick said he was interested in how gap of information between teams would affect the draft.

Riddick,  an analyst on ESPN’s Monday Night Football, pointed out that because of Covid and so many opt-outs and restrictions, team data on each prospect varied. Due to this, he expected lots of surprises in the ’21 draft.

McFarland, an ex-game analyst who now works in ESPN’s studio, said that some clubs draft the best available players no matter their positions and others make their picks based on positional needs .

These were good points at the start of the night and indeed they shaped how the draft would evolve.

We know that quarterbacks dominate the NFL, and the top-heavy list of this year’s draftees reflected just that. Five quarterbacks went in the top fifteen including the first three picks. The favorite moves of two of ESPN’s commentators covering the draft involved quarterbacks. McFarland’s favorite belonged to the Chicago Bears who traded for the 11th pick overall. Quarterback is a position at which the Bears have rarely flourished. And that’s precisely why Booger loved the move. The Bears are trying to erase some bad quarterback history.

Chicago chose Ohio State’s Justin Fields who was rated as Mel Kiper’s second best QB in the draft. McFarland pointed out that the success of Bears coach Matt Nagy and that of team GM Ryan Pace rides on the fortunes of Fields in a Bears jersey.

Riddick’s favorite move was made by the Patriots who selected Mac Jones at fifteen, because they didn’t have to trade up for him. Kiper compared Jones’ playing style to that of Tom Brady, saying that it is a perfect marriage. Riddick sternly added that the rest of the league should be terrified by the fact that Coach Bill Belichick was able to get his QB without giving anything up.

If you follow the NFL Draft, you know the name Mel Kiper, Jr. There is one thing he would never do, and that is take a running back in the first round. So, when the Steelers were on the clock with the 24th overall pick, Mel shocked viewers suggesting that they draft running back Najee Harris, considered the number one back in the draft. Pittsburgh desperately needs to improve their running  game.

Booger embraced Kiper’s thinking and the Harris decision by Pittsburgh because the former Alabama back was projected to go higher in the draft but was still available to the Steelers at that late point of the first round.

Mike Greenberg was the new host of the draft, taking over for Trey Wingo whose contract wasn’t renewed by ESPN. Greeny as he is affectionately called did well in his first such role.

He and ESPN captured the emotional rollercoaster of draft night. We watched players and their families exulting at times and others fretting anxiously, awaiting to be picked. The roots of following draftees’ behavior, home-to-home and player-to-player really took root a year ago, out of necessity. The draft was then held in the heart of the pandemic when there were no public gatherings of any sort. So ESPN was left with no choice but to stream transmission from individual homes including from that of Commissioner Roger Goodell.

Greeny also sprinkled in stats to enlighten fans. He mentioned for instance how Alabama joined the 2004 Miami Hurricanes as the only college team to have six players drafted in the first round. He was able to set up his on-air partners with topics who then shared apt anecdotes after most selections.

It seemed that every player interview conducted by veteran Suzy Kolber, began with “How does it feel?” It was a disarming question and allowed draftees to take a deep breath and feel comfortable.

Camera wise, ESPN’s depictions were strong. Viewers were able to eavesdrop on how coaches and team personnel grade draftees’ games, facet-by-facet. As an example, ESPN froze a video frame, demonstrating the measure of separation, a wide receiver builds against a cornerback chasing a pass in a tight race for the ball.

I particularly enjoyed Louis Riddick who was impressively spot-on in his analysis. He explained why, by his thinking, Zach Wilson will be a perfect fit for the Jets. Riddick narrated film showing us plays used by both the 49ers, where Kyle Shanahan is in charge and in Green Bay where Matt LaFleur is the boss. On both occasions, the QB rolled to one side with the entire offense rolling that way. At the last moment the receiver quickly pivoted back the other way and the QB stopped and threw the ball across his body, deep over the middle of the field.

Riddick described how with everyone heading one way, the defense isn’t prepared for the ball to be thrown to the opposite side of the field. Zach Wilson’s new offensive coordinator with the Jets is Matt’s brother Mike LaFleur whose play-calling is similar. Zach, Riddick stressed, can make that throw and is thus an excellent fit for the long suffering Jets.

The clip of Wilson making this throw on his Pro Day went viral. It was then that fans were convinced of Zach’s arm strength and that he would land with the Jets.

Booger McFarland’s analysis was much less impressive. He’s been around the NFL for decades, played the game and has been an announcer/analysist for the past few years. He knows football, but didn’t show it on the first draft night. His analysis was filled with less depth than Riddick’s. The draft is where NFL fans are eager to learn about players headed to their their favorite teams. Interest in round one is especially high because most of the draftees will be impact players. McFarland should do better than just broad-brushing comments like ‘he’s faster, quicker and stronger.’

On the second night of the draft, the crew was a bit looser. Mr. NFL Insider, Adam Schefter was bundled up in a blanket and shivering in Cleveland’s outdoor weather. Shefter said it was freezing in Cleveland and “insiders are not meant to be outsiders.”

Overall, ESPN’s on-air team did a superb job. Kiper and Riddick shared helpful insight on players and Greenberg’s focus was excellent from a human interest angle. Their work and those of others made up for  McFarland’s weaker analysis.  Had Booger been better, ESPN’s grade would have been an A+. Still, give ESPN an A for its craft coverage.