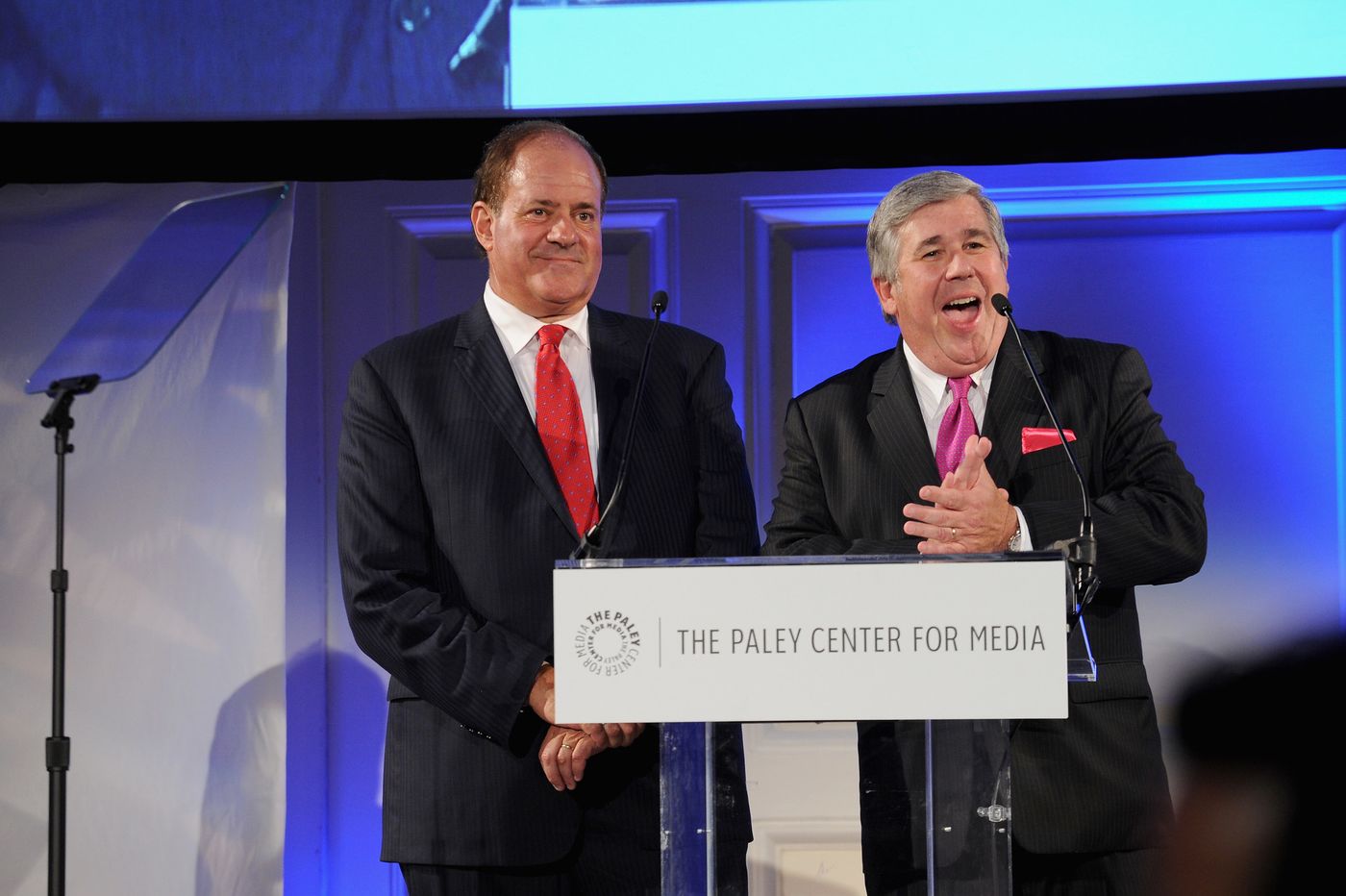 In 1979, the country had all of 16 million cable subscribers.

With spartan quarters, few viewers and little resources, ESPN launched its first program on September 7, 1979. It was available in 1.6 million cable homes.

Despite a litany of shortcomings, ESPN grew thunderously in the 1980s. By 1983, the subscriber count was up to 25 million and by the end of the decade the network was available in a universe of over 50 million subscribers. During its first ten years, ESPN was helped by  the acquisition of rights to televise the early rounds of the NCAA Tournament, extensive coverage of the NFL Draft, a Supreme Court ruling that prohibited the NCAA from limiting college football telecasts, the eruption of cable television as a whole, the purchase of the network by ABC, colorful personalities, dedicated staff and the country’s insatiable appetite for sports

There’s something about consistency. Berman, for all his shtick, is a novelty at ESPN. He arrived at the network a month after it launched and has been a mainstay since. His salary at first was $16,500. He anchored SportsCenter, NFL Countdown and was also associated with the network’s baseball coverage. George Bodenheimer, the network’s former CEO, said that Berman “helped put SportsCenter on the map and jump-start the growth of the ESPN brand.”

In ESPN’s early years, filling programming 24 hours a day was a challenge onto itself. Berman was quoted as saying, “We were Lewis and Clark hoping to find the Pacific.”

Fired by the Detroit Pistons, the garrulous and generous Vitale was out of coaching in December,1979. It was then that ESPN’s Scotty Connal offered him a job to do color on college basketball telecasts, but Vitale was reluctant to accept it. His heart was in coaching. Encouraged by his wife to try television, Vitale did and the rest is history. The game, the network and Dickie V started intersecting prosperously. His name and hoops were and are inextricable. Walk into an arena with him even today and he’s still the recipient of hugs and warm greetings. Michael Freeman in ESPN: The Uncensored History  says that at first he was paid $150 a game.

With not many play-by-play options available, ESPN’s evening programming often originated from the studio. The most entertaining for my money was hosted by Roy Firestone, a gripping interviewer who conducted thousands such programs on ESPN. Name the star and Firestone likely had him or her on his shows, first Sports Look and later Up Close. These long-form interviews are no longer in vogue on television. Yet in the day, Firestone was about as good as it gets profiling personalities. He could get interviewees teary-eyed or to open up like never before.

If there are two names almost interchangeable with ESPN’s early SportsCenters it’s Berman and Ley.  A special penchant for the esoteric and  journalism, Ley also covered soccer, the NCAA Basketball Selection Show and along with George Grande, he anchored the first ever wall-to-wall coverage of the NFL Draft in 1980. Later, Ley hosted the highly successful, Outside the Lines. George Bodenheimer, ESPN’s former CEO, suggests that in the early years Ley was a wonderful team player, emoting encouragingly on every piece of good news that came ESPN’s way.

The soft-spoken Gumbel was a strong ESPN presence in its first decade. He left a local anchor position on NBC’s WMAQ in Chicago to earn national exposure. He personified class and confidence in ESPN’s anchor chair. While he’s had a rich run of doing play-by-play, including two Super Bowls, Gumbel’s imperturbable demeanor was always best suited for the studio. On the ESPN set, Gumbel had folks in stitches one night when he accidentally said, “Chris Evert won in straight sex.”

When ESPN went on the air in 1979, it needed a recognizable and accomplished name. Hired by ESPN CEO Chet Simmons, Simpson was a high-prized recruit tapped from the established NBC. For many years, Simpson was number two at NBC behind Curt Gowdy. If Curt did the Rose Bowl, Simpson did the Orange Bowl. In the pre-explosive years of cable, Jim Simpson was a household name. He did lots of basketball early at ESPN, a sport to which the network had considerable rights. Jim was often paired with Dick Vitale. The ultimate pro, Simpson came from a school where color commentators didn’t overstepping their bounds. Vitale did. Simpson had the authority to ask the truck to shut Vitale’s microphone, if Dickie V talked excessively. On at least one occasion he ordered the truck to do so. After  silencing Vitale for a stretch of minutes, Simpson asked Vitale whether he’s ready to continue again, in a restrained fashion. DIck did and at least then, spoke in more measured intervals.

Patrick was an early play-by-play announcer at ESPN. College basketball helped put ESPN on the play-by-play map . Mike did the play-by-play of just about everything that ESPN was able to get in its fledgling years. When the network eventually landed the NFL’s Sunday Night package in 1987, Patrick was given the assignment to call the games. He did so through its entire 19-year run. While many will remember Patrick for his NFL work, he’s equally as proud of all the ACC games he covered, the women’s Final Fours and the College World Series.

Grande was reared in Connecticut so Bristol was not a foreign outpost for him. You’ll often see pictures of George on the same set with Lee Leonard. In fact, the two were the first faces that viewers saw when ESPN launched on that famous day, 40 years ago this September 7th. Grande also engaged in the pick-by-pick coverage of the NFL draft. He left, according to Bodenheimer, when morale at ESPN wasn’t very strong. YouTube has clips of Grande anchoring a SportsCenter when he had no more than static graphics and a day-old film clip as on-air resources. On that YouTube clip, it appears that neither Grande, Gumbel or Berman had as much as the basic help of a teleprompter. They were all extemporizing with just a few written notes.

For the first eight years of the network, Mees anchored SportsCenter. A hockey buff, he started calling ESPN’s NHL games in 1987 and cut back on SportsCenter. A number of years later, when ESPN lost the NHL rights, he returned fulltime to SportsCenter. He died in 1996, drowning in a swimming pool in Connecticut. Gayle Gardner said that he was called by fellow ESPN colleagues, ‘solid Tom.’ because he was a better talent than the credit he received.

Sal had years of experience anchoring sports in New York. Well respected, Marchiano gave the young network a New York connection. He was smooth, had a comforting smile and appeared hale. In addition to being a talented generalist, Marchiano had a special affinity for boxing and covered prize fights for the network. Marchiano didn’t want to continue anchoring SportsCenter, so Scotty Connal relieved him of the studio duty while the two kept negotiating to limit his responsibilities to boxing. Finishing his last SportsCenter, Sal said “Happiness is Bristol in my rearview mirror.” That was it. The comments turned into Marchiano’s valedictory. He was no longer welcomed at ESPN in any role.

Tim wasn’t quite at ESPN from the beginning. He came along once the network was fully embarked. Still, he left an indelible stamp as one of the network’s early voices. Brando was perfectly comfortable in both the studio and doing play-by-play. He helped establish the network’s footprint in college football, a couple years after the 1984 Supreme Court decision opened the floodgates and ESPN picked up rights to a healthy schedule of games each weekend. Brando, now with Fox, is one of college sports best ever play-by-play announcers.

Freeman writes that Gardner “was instantly credible to viewers, a difficult feat for women in sports at the time.” He also writes that Gayle was perhaps the best writer of the early anchors. Like others who lived in Bristol, Gardner, reared in Brooklyn, carped about the lack of a social life in the Connecticut hamlet, a blue collar mainstay. She left ESPN for NBC. Gayle says that after her shifts on SportsCenter, the ESPN switchboard would get calls asking when she would be on-air again.

However critical I can sometimes be of Charley Steiner’s work on Dodgers radio, he always gets a little pass from me for one thing: “Follow me! Follow me to freedom!” ESPN’s promos have been genius forever. I’d like to add something about Roy Firestone. A terrific interviewer, and good at using clips to get people going. He once showed Don Drysdale a clip of Jon Miller imitating him, saying it sounded like the way Bing Crosby would broadcast a ball game, and he was this vicious pitcher, and it was a good way to get Big D to discuss how… Read more »