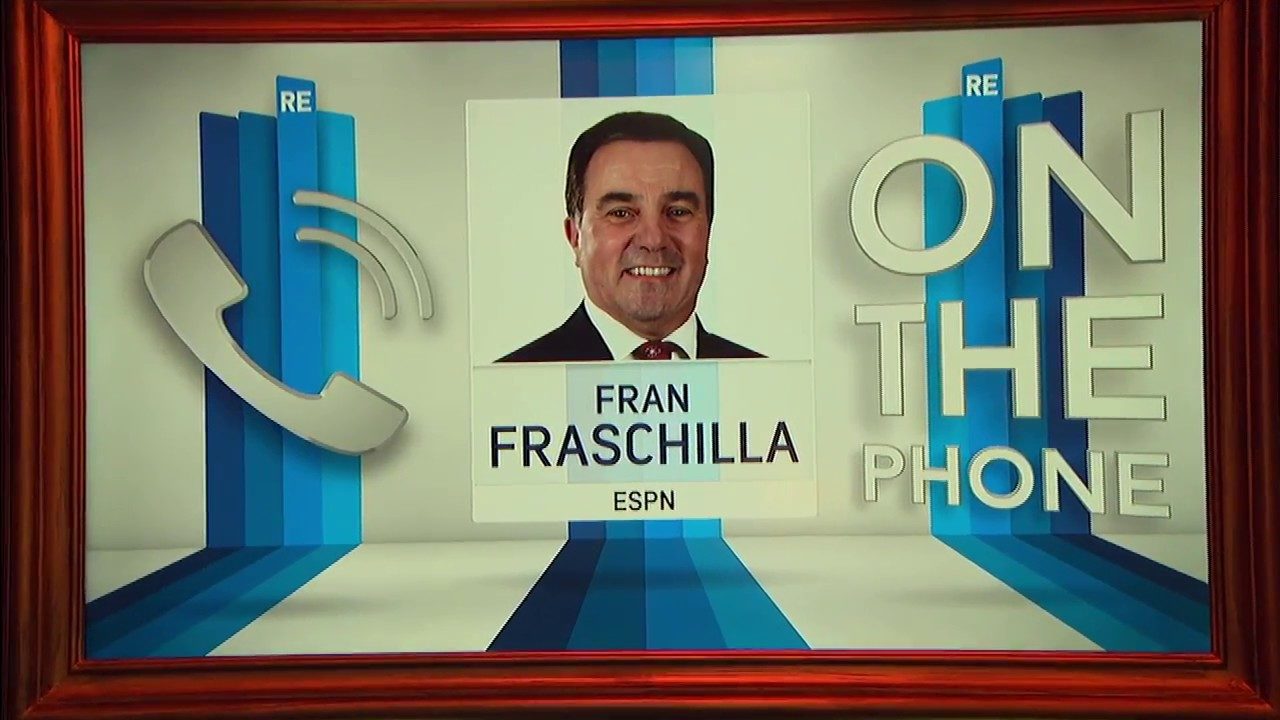 Fraschilla addresses the future of St. John’s and Georgetown; opportunities for him to coach again and the play-by-play announcers with whom he’s worked at ESPN

Talk about a man on the go, how about ESPN’s  Fran Fraschilla? In the month of November alone, he attended 45 basketball games. That’s generally when the behemoths play the sisters of the poor to pad their records; hoping to impress the selection gods come tournament time. Still, Fran doesn’t want to miss a thing.

Fran’s a basketball version of a sponge. He soaks up all the hoops humanly possible. After all, he does 50 or more games a year for ESPN and vows to never expose himself for being unprepared. He won’t do games on the fly. He’s always ready.

Other than a lingering itch to perhaps coach again, Fran, 60, still puts the meals on his table doing what he loves. He’s around basketball which he first learned in the Brooklyn schoolyards. After attending CUNY’s Brooklyn College, he hit the trail to launch his coaching career.

Following requisite stops as an assistant in disjointed towns outside of New York, he landed at Manhattan College in the Bronx. It was there that he caught the attention of St. John’s which was faltering four years after the legendary Lou Carnesecca retired in 1992. In Fran’s second season, 1997-98, he got the Johnnies back on track. They were in the NCAA Tournament for the first time in five years.

In what Fran said was then  a failed attempt to renew his St. John’s deal, he used apparent leverage through negotiations with Arizona State to force a contract extension with his bosses in Queens. The Johnnies were not happy with him, whether due to this ploy or other occurrences, and they unloaded him. That was twenty years ago. A year later, he was in Albuquerque coaching New Mexico where he spent three seasons before departing in 2002. In his nine years at the DI helm, his teams made eight post-season tournaments.

In the years that followed, St. John’s did little. Mike Jarvis succeeded Franschilla at St. John’s and the Johnnies’ ship sunk ignominiously. Jarvis presided over a debacle, a scandal ridden basketball program that had to forfeit 47 wins. The school’s rich basketball heritage was badly tarnished.  Then came Norm Roberts whose forgettable six years were defined by one ugly number, a coaching record of 21 games under .500.

By 2003, Fraschilla found his new career, television. At that point, he was afforded the opportunity to live anywhere he desired, so he moved his family to Dallas which has been his home for 17 years. Wife Meg is delighted, she’s around her mom and sisters. Nonstop flights from DFW, happy wife, happy life.

We talked about the transition to television in our Q&A.  Still, one can imagine that the two St. John’s years still stick to his ribs.  As a coach, his overall college record was 175-100. He says that he occasionally believes that winning a national title was in the cards had he stayed in coaching. Now the satisfaction is vicarious. His sons are out of school and they’re following in dad’s footsteps. They’re in the coaching business, Matt is a grad assistant at Villanova and James is with the Magic.

For 15 years, Fraschilla’s been at ESPN and is best known for covering the Big 12. He’s tackled the ESPN workload with no less confidence, rigor and passion he did coaching. Fran talks about sitting in his courtside television seat on the opposite side of the benches, watching millionaire coaches sweat bullets. Meanwhile, he says all he worries about is whether a decent restaurant will be open when the telecast is over.

What’s the adjustment like at first; going from coaching to broadcasting?

The mechanics of broadcasting took a couple of years for me to learn. But coaching is a “feedback world.”  You’re used to giving it and getting it. So I told the ESPN colleagues who hired me and who I worked for to tell me the truth about ways I can get better and I took their critiques to heart.  And, I still do.

Talking about basketball is the easy part because it has been part of my entire life. I study the game every single day and think fans, coaches and colleagues can tell that I do.  Yet, I have a growth mindset about basketball so I am still learning.

It’s actually amusing and annoying when I learn something about the game and I think, I wish I knew that 25 years ago when I was coaching.

When you began broadcasting; were there color commentators you listened to, to get a feel for what needs to be done?

I listened to everyone who covered college basketball on television because I was always watching games when I was coaching. So I paid close attention and actually reached out to a number of them when I got the opportunity to work at ESPN.  Jon Sundvold, the former NBA player and Missouri star, was very helpful to me in phone conversations. Unexpectedly, when he got tired of traveling around the country, I got the opportunity to replace him on Big Monday games.

Most of the advice was regarding the mechanics of the broadcast. But I really didn’t try to pattern myself after any one guy. My style is easy-going, passionate and, hopefully, knowledgeable without being a know-it-all. I try to explain the game so that the hoops novice and the hardcore fan are both learning something.

You’ve been with ESPN for 15 years, what’s been your most interesting assignment?

It’s probably been the NBA Draft and serving, until last year as ESPN’s “international expert. “I have always been an NBA Draft junkie and have had a couple of opportunities to work in the league, so I study the NBA Draft twelve months a year.

Through a confluence of events including my love of international basketball, my connection to a couple of NBA teams, the emergence of international players and needs at ESPN, I undertook the assignment of studying worldwide players for our draft coverage. It has become the biggest thing that people stop me for when I am traveling the country. I’m always asked, usually in an airport somewhere, “How do you know all of these guys from Latvia and Croatia?” It’s been fun and it’s gotten me to Venice, Italy, where the international draft combine has been located, thirteen times.

You’ve worked with more than a handful of play-by-play announcers. Which one taught you the most?

As you can imagine, I have worked with so many great play-by-play announcers at ESPN. In my early years, I worked with Dave Pasch and Mark Jones, not knowing they would go on to be big stars. Jon Sciambi, a great broadcaster, has become a close friend, in part, because we worked sixteen straight games together one season.

But the guy I both learned a lot from and enjoyed the most was Brent Musburger.  First of all, it was like working with a living, breathing sports broadcasting museum. And, I would have an out-of-body experience when he had a dramatic call at the end of one of our games because I had heard so many of those going back to my childhood.

Brent also reinforced every single night that yes, we were to inform but also to have fun.

Do you miss coaching and any regrets in your years running teams?

Of course, I miss coaching but, luckily, I haven’t had to miss basketball because of my job at ESPN.

I had many, many opportunities to return to coaching but I made a lifestyle decision to spend as much time as I could with my family, including my two sons, so that I could watch them grow up.  So each time I had to make that tough decision whether to return to coaching, I had to decide between my kids or other kids and I chose mine.

Coaching is something I will entertain again now that my sons are grown and now in the game themselves. There may not be the same opportunities that I once turned down but there will be some.

Do you feel you were unfairly let go at St. John’s?

First of all, I have no bitterness about that situation.  And, I have been back to St. John’s a number of times since.

It’s obvious that the program I left in 1998 was on the verge of being a national power again, with back-to-back Top 5 recruiting classes and more local kids who we were recruiting. I interviewed for another prominent coaching position and it was not looked upon kindly. You could say that my ploy at getting a raise didn’t work!

Sadly, the program has been an afterthought since I left. In retrospect, had we all communicated better, the people in charge of the school at the time would have handled my situation differently. But, I rarely “what if” my time there.

Can Chris Mullin succeed at St. John’s or Pat Ewing at Georgetown?

Chris grew up in my neighborhood in Flatbush and I have known him since he was fourteen and I was eighteen. We played playground basketball in Marine Park  (Brooklyn) so I was there at the beginning of his incredible career.

It looks like Chris finally has a talented, mature and confident team in place – in a year where the Big East is rebuilding. I saw them last month at Barclays Center and I was impressed.  The question is, if they have an NCAA run in them, can they build recruiting momentum going forward? Pat Ewing and Georgetown are in a similar situation, as well, but they are a year or two behind.

Can you make the same dough in broadcasting as you do coaching?

No! But it is a good living. Coaching a major college team is like being the CEO of a small company. You are in charge of everything and compensated accordingly. Broadcasting is like consulting. People want your opinion but it really doesn’t matter what it is and again, you are paid commensurately.

When I watch two of my coaching friends in a close game I am broadcasting from across the court and these two millionaires are in agony, all I am thinking is, “I hope Outback is open until 10.” I keep it all in perspective.

How do you work your way up to a higher spot on the depth chart as a commentator?

I love what I do at ESPN and realize how lucky I am, especially with all of the cutbacks that have gone on in the sports media industry.  At the same time, I know that I am very good at what I do and that I am appreciated in the basketball world among coaches and players, the basketball media and fans. I know my opinion matters.

My spot on anyone’s broadcast depth chart is subjective. I live in Dallas, far from our ESPN nerve center in Bristol, Connecticut. So I don’t have the opportunity to get to know the people who make the decisions. All I can do is keep doing the best I can.