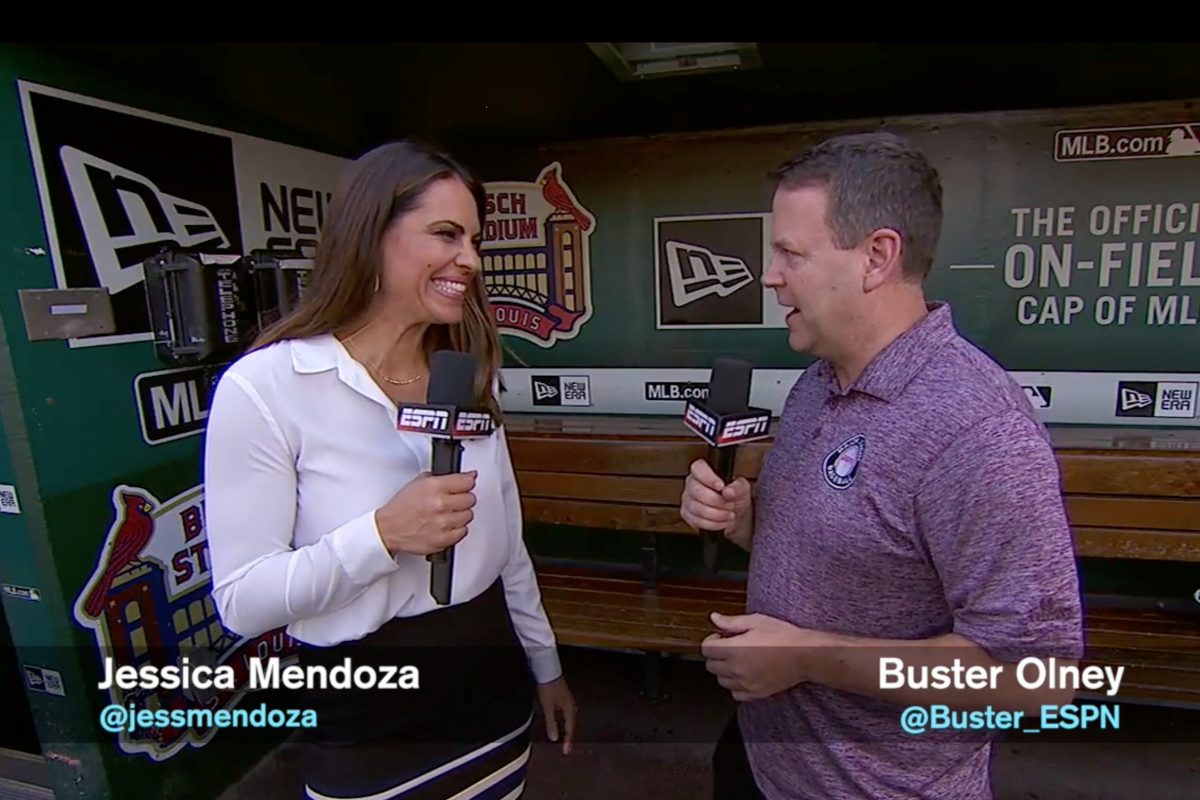 ESPN's Jessica Mendoza and Buster Olney talk about MLB's response to positive testing of Covid-19 and the effect of a truncated 60 game season on pitching and suspensions.

The 2020 MLB season is proving to be unforgettable and record-breaking just one week into play. According to SportsBusiness, MLB saw the highest TV viewership of a regular-season game since 2011. (Nationals vs. The Yankees averaged 4.075 million viewers) Shane Bieber also tied Karl Spooner for the most strikeouts through two starts in a season since 1901. All good!

But after a long delay, detailed planning and heated negotiations with the Players Association, baseball faces a critical obstacle, one that threatens its season. Over the last week or so, there has been a drastic increase in Covid-19 cases among players and team personnel.

As of today (August 3), 24 members of the Marlins, two members of the Phillies, Juan Soto of the Nationals, and six members representing the St. Louis Cardinals all tested positive. Recently, it was reported that Reds’ star first baseman, Joey Votto was placed on the injured list after self-reporting symptoms of the pandemic. Disappointing and discouraging for sure.

ESPN commentators Jessica Mendoza and Buster Olney have already been anticipating how the pandemic would drastically impact the 2020 season.

Since the opening weekend the two commentators have repeatedly appeared on ESPN shows such as Get Up, SportsCenter, and First Take. In addition Olney has discussed the pandemic with Mendoza and reporter Tim Kurkjian (l) on the podcast, Baseball Tonight. Over the course of these appearances, it is evident that Mendoza and Olney are focused on how the lords of baseball are policing good general health and safety. The commentators also address other profound effects of a 60 game season.

Last week, Mendoza expressed concerns over the protocols for the 2020 MLB season. “We’re talking about health right now,” she stated in an appearance on First Take (Monday July, 29) in response to the initial Covid-19 outbreak that hit the Marlins.

On that same appearance, ESPN commentator Max Kellerman asked Mendoza about MLB’s protocols. Her response was that within MLB’s 113 page preventative plan, if a player tests positive for the Coronavirus, it is addressed by the team, not uniformly by the Commissioner’s Office. The former softball standout learned from her experience covering the Korean Baseball Organization, that it had zero positive tests. If a player does test positive, the entire league would shut down for two weeks.

On Friday’s podcast of Baseball Tonight, Olney addressed the increase in players speaking out on social media to challenge MLB. “I think it’s cool cause I think in this situation, especially with the coronavirus, they have more risk than anybody,” he said.

With 102 games fewer than usual, MLB has seen a ripple effect in how the games are played. Mendoza and Olney discussed how this shortened season and some rule changes affect the impact of lineups, plays, injuries and player suspensions.

Last week on Olney’s podcast, he and Kurkjian analyzed Justin Verlander’s injury and how his two-week rest period could significantly affect his ability to start for the remainder of the season.

Kurkjian added, “If he just rests and does nothing for two weeks and then it takes him two weeks to get ready to pitch in a major league game, he’s missed half the season. When you miss half the season, you really have to examine ‘am I going to be 100% for October.'”

Olney explained, “If he’s (Verlander) going to be available this year, it would seem to be only in a much smaller role, maybe as a reliever or starter, who goes two or three innings at the end of the regular season, [into] the postseason. There’s just not [enough] time left in the calendar for him to comeback as anything close to being a full-time starter.”

Similar thoughts on the impact of lost games were also raised when Olney talked about the Dodgers’ Joe Kelly’s eight game suspension, after targeting a fastball at Astros batter, Alex Bregman, and taunting Carlos Correa as he was walking to the dugout. From a regular 162 game measure, the suspension is essentially 21 games.

Mendoza observed how the 60 game limit increases the stakes for teams. On Friday’s episode where Olney featured Mendoza, she stated that “Every Game Matters.”

Despite the concerns and analysis from both Mendoza and Olney, MLB is still fighting for a full 60 game shortened season. As of Friday, the MLB Players Association announced they agreed to play seven inning double-headers and that change went into effect Saturday, August 1. Despite reports that the uptick in cases might cause a shutdown of the season, Commissioner Rob Manfred told ESPN’s Karl Ravech that he fully plans for this season to continue.

“We are playing. The players need to be better, but I am not a quitter in general and there is no reason to quit now,” Manfred said to Ravech.

As we embark further into week two, we will continue to witness the difficulties of executing a successful season against the scourge of Covid-19. On one side you have people like Mendoza and Olney who express legitimate concerns surrounding players, personnel and staff. On the other, you have Rob Manfred who sees how the lack of a season can cause club owners to lose almost $4 billion (CNN) and possibly create more setbacks for a sport that is struggling to increase its fan base (New York Times).

Finally, you have the uncertainty of how the Coronavirus will continue to impact the MLB and the entire world.