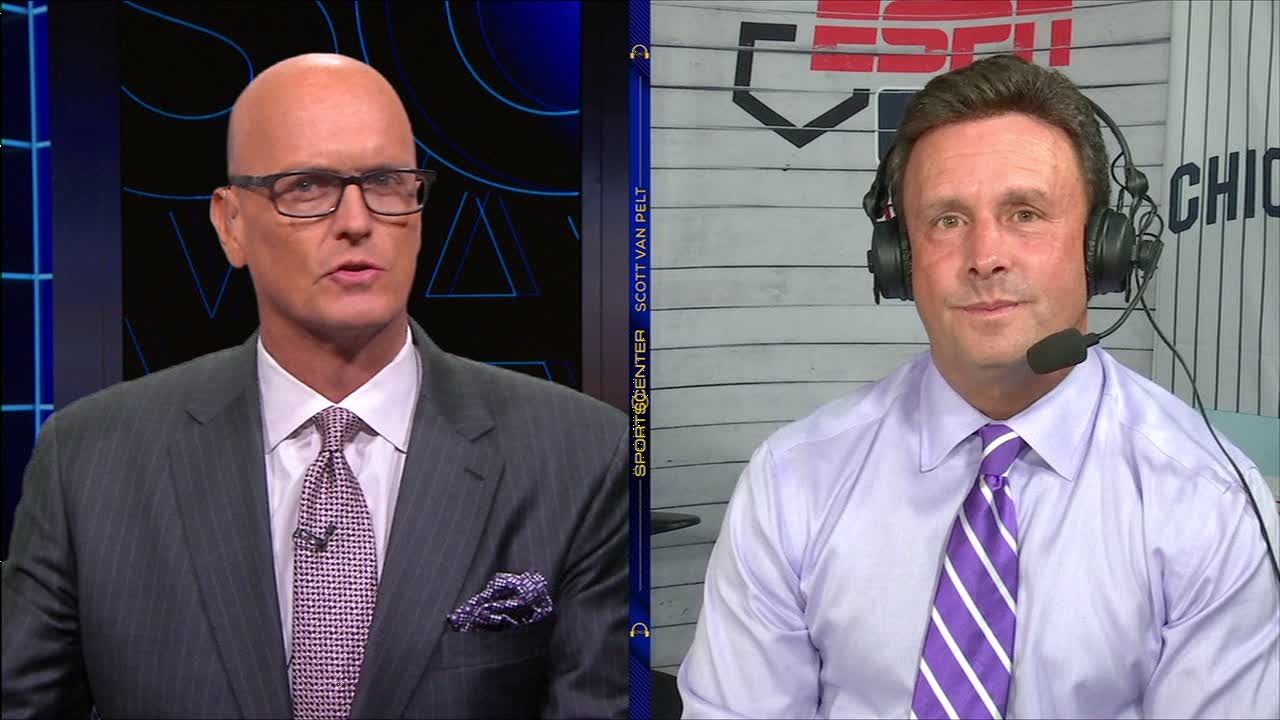 The 25 year ESPN vet says,  “We don’t use the word viewers anymore. We’re available everywhere. We have consumers.” Ravech is one of the few who doesn’t use an agent. He negotiates his own contracts.

At ESPN, the name Karl Ravech will always remind viewers of baseball. Yet, talking with him, I learned that Karl’s done just about everything imaginable, from years in the studio to covering golf at St. Andrews in Scotland.

ESPN wasn’t on Karl Ravech’s radar when he first started thinking about a career as a teenager. Yes, he was a sports fan and an active athlete too; but he never oozed over sports announcers. In fact, it wasn’t until a high school adviser, knowing that Karl liked to write, suggested to him that he pursue something in the area of communications.

So Ravech began writing for the local Needham, Massachusetts newspaper. He says that when his byline was attached to a story, “I got an adrenaline rush.” It was an epiphany, “I began to appreciate the influence that the media had on sports fans.”

The 53 year old ESPNer strikes me as determined and methodical. So, no surprise; he then started the meticulous process of scouting colleges with strong communications departments. Ravech determined that Ithaca College was best suited for him. “I felt that a smaller school would have a greater impact on me because there wasn’t as much competition to get hands-on opportunities. At Ithaca, I got lots of radio and television experience.”

After graduating in 1987, Ravech remained in the central New York town, working in cable for $12,500 a year. “I actually rented a spot in someone’s house where all I had was a mattress on the floor. That was it. I then worked in nearby Binghamton with Trey Wingo and former ESPN anchor Bill Pidto.”  Ravech always liked the storytelling aspect of television so he was open to doing news too.

His advice today for budding broadcasters is what served him well in his early pursuits. “Meet as many people as you can. It’s all about networking.” As it turned out, a news director in Rochester whom Karl drove to see, recommended him for a weekend sports anchor gig in Harrisburg, Pennsylvania. He got the job in 1990 and his salary ballooned to $21,500.

In 1993, he connected with agent Ed Kleven in Boston, hoping to find a sports or news job in a bigger market.  But the road took an unforeseen twist.

Kleven said that the only one he knew who might help him is Al Jaffe at ESPN. “I wasn’t a big ESPN consumer then and hadn’t set my sights on a job there. Yet I went for it.” Karl says. Al was the hiring chief and Kleven got Ravech an audition.

Karl engaged in a prolonged process that included a meeting with then ESPN top content executive, John Walsh. Then time elapsed. Eventually, he was told that ESPN liked him but that he finished second to Dan Shulman for an overnight anchor position on SportsCenter. As fate would have it though, he got another call a little while later, . Apparently, Shulman had an inextricable contract with the Toronto Blue Jays and Ravech got the job.

That was 25 years ago when ESPN was only a TV network. It hadn’t yet expanded its reach digitally. “It wasn’t until later that I appreciated the gravity of ESPN when I joined. When I got there, it was the best time to arrive,” he says.

Karl and I caught up earlier this week before the busy baseball post season.

So, what did you do when you started?

I was teamed on the overnight SportsCenter with Craig Kilborn. We followed the Big Show, Dan Patrick and Keith Olbermann. After a little while, I went into SC boss, Steve Anderson, and said, “What’s with this guy? He’s not taking sports seriously. His lead-ins on camera don’t make sense. What should I do?” Ravech was told by Anderson to be patient. The boss’ words rang true. By 1995, his duties were expanded. “SportsCenter can be pretty scripted,” he says. “I was given flexibility to be more extemporaneous with Baseball Tonight. I worked with guys like Chris Myers, Harold Reynolds, Peter Gammons and John Kruk.

Before we dig deeper, share a quick description of John Walsh.

Irrepressible, brilliant, albino, has issues with his sight; an amazingly creative guy, the brains behind the ESPYs and so much more. I wasn’t forewarned. But when I arrived for my audition in Bristol, I was told that Walsh wants to meet every candidate. The problem was that John was in Manhattan that day. I had no money for the tolls so I had to borrow some cash from my father-in-law to get down there.

You’ve been at ESPN for 25 years. What is it about ESPN that has encouraged you to stay?

I’ve always felt that the atmosphere is family like. About five years after I got here, I suffered a heart attack. ESPN couldn’t have been more supportive. I’ve also had amazing assignments. They’ve come my way organically.

I still feel a connection with the consumer. We don’t use the word viewers anymore. We’re available everywhere. We have consumers.

The only time I thought about a separation was when layoffs were pending a few years ago. I didn’t know what to expect. A departure then wouldn’t have been at my initiative. Luckily for me, I made the cut. ESPN has had a tight-knit culture which through the years has endeared me to stay. The feeling has never grown stale.

Tell me about your son, Sam. He knew immediately that he wanted to follow in dad’s footsteps. How deeply embarked is he in broadcasting and what’s he doing?

When Sam was a kid, he would travel with me. At age five, he was at the World Series at Fenway, sleeping on the floor covered with a blanket on a cold night.

From the start, he wanted play-by-play. It’s where the opportunity is today, more so than in the studio. Sam went to Pepperdine where he got a lot of reps. He now calls games for the Richmond Flying Squirrels, a Giants’ AA team. He’ll do a schedule of games for the ESPN family of channels this year. In fact, we had a special moment last Thanksgiving, as a family celebration of sorts; not together though. I was in the Bahamas, working hoops and he was in Louisiana on assignment for ESPN.

What happened to Baseball Tonight?

The company decided to informally cede the property nationally to MLB Network. The truth is that as the years evolved, the regional sports networks expanded their own pre and post game shows. In other words, there was local competition all over the country.  I didn’t agree with the decision but that doesn’t mean that ESPN made a bad decision.

I don’t have any. Kleven did two contracts for me. But the last 18 years I’ve represented myself. When I decided to do so, ESPN was a small bonded family. Agents will say I left dollars on table. Yet, I understood the marketplace and want to feel comfortable. I was never obsessed with being the top paid on-air talent.

There are others who represent themselves too. I’m not the only one. What broadcasters do invariably need is a good financial adviser. That’s first.

Would someone starting now at ESPN gain the recognition of guys like you, Dan Patrick or Chris Berman who started decades ago?

Tough today to start at ESPN and make an impression. Fans have so many options. There’s CBS Sports , NBC Sports and Fox.  Just being at ESPN years ago created an impression in the collective consciousness of the viewer. It’s a different landscape today. And that doesn’t include all digital tentacles.

You’ve had some characters on Baseball Tonight. Talk about John Kruk.

Lots of people think that Kruk goes out for beers and that he parties. He’s not a drinker; although being perceived that way. He has a big heart, loves baseball, tells it like it is and doesn’t sugarcoat things.

You’re from the Boston area. What are your recollections of announcers you listened to as a kid?

They weren’t the national guys. I liked Ken Coleman on the Red Sox, Gil Santos on the Patriots and Johnny Most, of course, on the Celtics. The guy though whose big voice I really remember is Bob Wilson, the longtime radio announcer for the Bruins. My father and I would drive back from games and hear him do the post game show and read commercials for a bank. Wish I can remember which one, but it was his commanding voice that’s unforgettable.  I also loved Johnny. He hated the Bad Boys of the Pistons and the Sixers and the Lakers. A great character.

You’re known for your 25 years with baseball related programming; including all those years at Baseball Tonight. What else have you done?

I covered PGA events, NASCAR and I still contribute to SportsCenter.  I’ll do lots of college basketball this coming winter; most visibly, play-by-play for our SEC package on Tuesday nights. I’ve done years of the Little League World Series, the College World Series and MLB games.

You had little professional play-by-play experience when you got your first game assignment at ESPN. How did you go about it?

I really hadn’t done play-by-play since college. But working in the studio for so many years made me a conversational play-by-play guy. I try to be myself. When doing a game, I don’t try to sound like anyone else.

Baseball is as wide open as ever. Both leagues are unpredictable. I can’t project the World Series opponents. It’s very even. The American League has better teams. The top four AL teams (Sox, Astros, Indians and Yanks) have an advantage over all National League teams. But anything can happen.

What can baseball do to attract the youth and speed up the game?

The pace of play discussion is a mirage. I would leave it alone.

But a three hour commitment is too long. Baseball should cut the game down to seven innings. It addresses the issue of attention span. There’s a reason there’s historically been a seventh inning stretch. Cutting down the innings produces a greater sense of urgency for innings four to six. Young fans have been exposed to Little League baseball excitement. It’s a seven innings game.

I wouldn’t legislate out meetings at the mounds or consider changing 4 balls and 3 strikes. Going to seven innings won’t effect the number of jobs on the rosters.

Don’t summarily dismiss the idea. Consider it. I don’t want someone to say, “That’s stupid.”