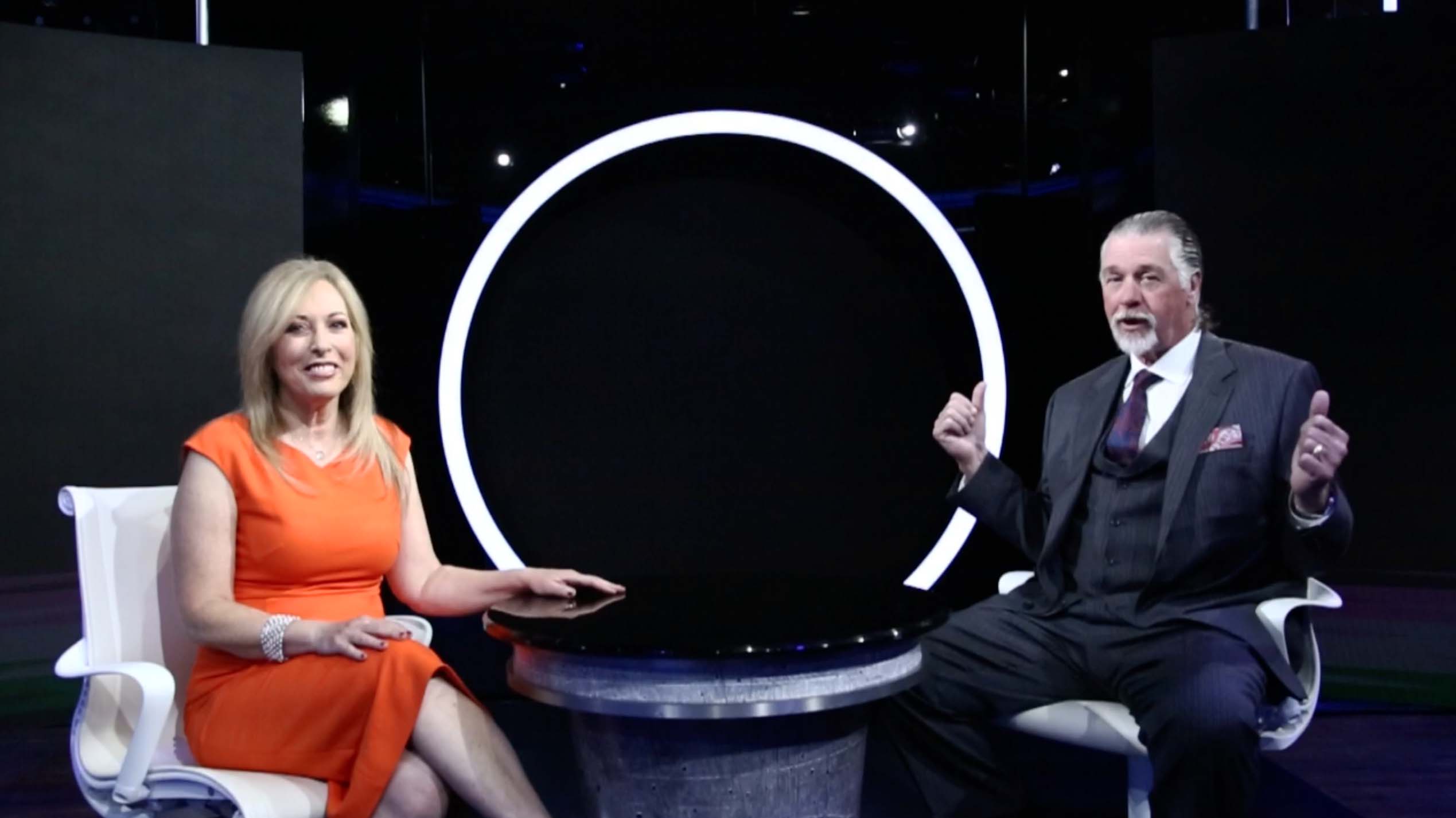 Ask fans across the country to name a woman national sportscaster of any sort and Linda Cohn is likely to pop up first. The prominent veteran has been in the ESPN anchor chair for 26 years.

No other woman in the sportscasting space gets as much face time as she does. Others, like Doris Burke and Debbie Antonelli are fine basketball analysts but are essentially limited to just one sport and pale in camera time to Cohn.

Based on my anecdotal metric, when considering breakthrough achievements, time-in-grade, visibility, knowledge, influence, versatility, durability and more, Cohn is among the top five pioneering women sportscasters. The others in alphabetical order are  Mary Carillo, Suzy Kolber, Robin Roberts and Lesley Visser.

Cohn is believed to be the longest tenured woman anchor in sports television history. Remember that the gifted Robin Roberts expanded her horizon beyond sports moving  to lofty roles like co-anchoring Good Morning America.

While Linda’s affinity is for hockey, she can talk baseball, football and basketball with the best of them. It’s interesting to note that two of ESPN’s top hockey aficionados, Cohn and Steve Levy are both Long Islanders who attended SUNY’s Oswego State.

Anchoring sports reports is a facile feat for Linda, no matter the medium, radio or television, the hour of the day or the sport she’s covering. As a young teenager, Linda was a hockey goalie who played with older boys while she was in high school. She later played for the women’s team in college.

Linda started her on-air career on Long Island before she got an opportunity in New York City. Working at all-news WCBS Radio, her sports reports had to be done concisely and in an economy of time. She was an understudy there to longtime WCBS anchor Ed Ingles whom she considers a mentor. Ingles also helped train Mike Tirico .

Cohn eventually migrated to television, working for the old Sports Channel America. She then briefly anchored sports for a Seattle television station before being hired by ESPN in 1992. By 2016, Linda had hosted an enormous number of  SportsCenters, 5,000!
​
The seasoned sportscaster adheres to a cardinal rule for success. She always sounds like she’s having fun on-air. Doing so, puts viewers in good moods. No one wants a somber looking anchor. Warner Wolf proved it in New York through his decades of success.  His smile and chuckle were so contagious that anyone within an earshot can be heard chortling along. Red Barber said, “When you’re in the booth, remember that no one cares about how you feel or what kind of day you had.” Linda gets it.

Years ago, a New York retailer’s popular slogan was “It’s not fancy, but it’s good!” In the case of Linda Cohn, “She’s not flashy, but she’s excellent!” Or as another advertiser says, “Good to the last drop!”

We did an extensive Q&A with Linda which I trust you’ll enjoy!

You’ve been with ESPN since 1992 and you’ve been very visible in the anchor chair all these years. From an historical perspective you might be considered one of the women pioneers in network TV sports. Have women made sufficient progress the last 25 years? Are there equal opportunities today for women in television sports?

Absolutely women have made progress in sports over the last 25 years. I’ve lived it. The first thing I ever covered was in the mid-80’s and I had to deal with dressing rooms and locker rooms and crazy reactions. How to handle something like that was difficult at times because all I was doing was following my passion and covering sports, and so when I look at how far women have come, from reporting to anchoring, following in the footsteps of not only me but the women before me, the Lesley Vissers, the Robin Roberts, people like that, you can see that now they can do anything. And now when you see Doris Burke, for instance, she’s a fabulous analyst and color commentator for the NBA, and to me that is something that I think is tremendous growth for women in sports, and it can continue to grow. And then there are women hosting sports talk shows, which is something I never thought that I would see, and something I do also, and so it’s nice to see that women now have a stage to have an opinion on what they think about sports or a team or a player.

You have strong roots in radio, how difficult was it for you to migrate to television?

It was challenging. I love radio so much – you can say what you want, basically, and TV is much more controlled, and you have to worry about the way you look. Being a woman you have to care about those things because people will remind you. When I first started I’d get phone calls in the middle of the night and ESPN would send them directly through to my voicemail. This was before social media, and you would hear compliments but you’d hear a lot of negativity too – they’d be more interested in what rings I wore and what shoes I wore and what dress I wore than anything I said, and so I mean to this day it’s really difficult for a lot of women because what they wear can be distracting. Should it matter – no, but is it a reality – yes. And I always say this to young women in the business: they cannot in this world of social media pay attention to their mentions. I don’t care how great the mentions are, because you can’t put any emphasis on “wow look at all these mentions on Twitter, how great I am” because then you can’t make a big deal about the one negative mention. If you love the positive, then you have to treat the negative the same way, and I say don’t treat it the same way at all, it shouldn’t matter, you should just follow your own path and not worry about it.

What did you have to learn when you first arrived at ESPN?

Just be accurate. That was the most important thing. You don’t ever want to make one stupid mistake, whether it’s a pronunciation or a fact wrong, because that can ruin everything that was positive you just said.

Growing up in NY, who was your favorite local television sports anchor?

Even though I love Marv Albert a lot, the greatest at play-by-play, as a local sports host, for your local sportscast, I loved Len Berman. He worked for WNBC – I loved him because he would just talk to you. He wouldn’t scream at you, he didn’t have shtick, he didn’t have catchphrases, he’s just a guy talking sports with you and it was great.

When you broke into the business, who were your broadcast mentors?

Ed Ingles from WCBS Radio – he is the one who first gave me a break in sports at WCBS. This was before WFAN. I did sports updates, the first woman to do that on WCBS. He was amazing – he did everything – play-by-play, covered, reported, hosted, he was everything. He was definitely my sports mentor.

You’re pretty versatile. You feel comfortable covering a variety of sports. But it’s no secret that you have a special love for hockey. Why?

I played hockey, so when you played a sport you have that special passion and interest and you don’t want to lose that. I played hockey when I was a teenager, played with boys in street hockey, and then my big leap was playing with boys on my high school hockey team. I didn’t play hockey with girls until I went to college at Oswego State. So you don’t want to lose that – I’ve always been very competitive as well.

From your perspective, how have the NHL playoffs gone this season?

Playoffs have been great – they’re always great. There’s so many storylines. What’s great about the Stanley Cup Playoffs is there’s always unexpected heroes. The greatest storyline so far was the greatest storyline during the regular season, and that’s the Vegas Golden Knights. Nobody now is ever discounting what is possible with an expansion team – there were a lot of doubters. Not any more.

Who do you see in the Stanley Cup finals and which team will win it?

What’s it like talking hockey with Barry Melrose?  He’s a character!

He’s great. Barry’s the best. He’s so knowledgeable and having the show “In the Crease” on ESPN+ gives Barry the stage that he deserves, like the “NHL2Night” days, of him really sharing his opinion, really breaking it down, and having fun with “Barry’s Best,” and I have “Linda’s Must-See Save” because I’m a goaltender, so it’s been great. But the best part is sitting and watching games with him leading up to the show because we wait until all the games are over, and then we go right through commercial-free for “In the Crease.”

You’ve done much more anchoring than play-by-play. Still, at which of the two roles are you better?

I have no interest in doing play-by-play, I never did. I got the opportunity to do some golf play-by-play. I always liked anchoring but I do feel that I could easily be an analyst for the NHL because I really know the game, that would be the next step if I choose to do that, but I have no desire to do play-by-play. I’ll let the experts do that one.