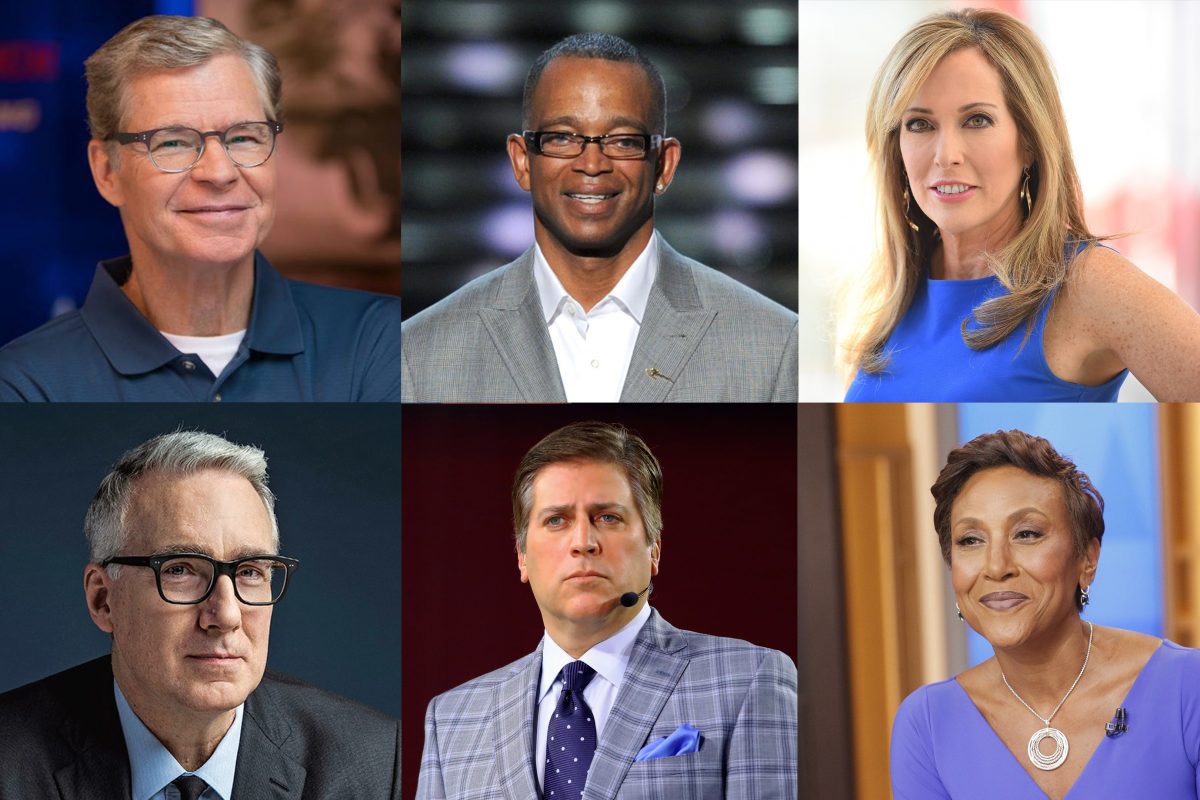 ESPN’s second ten years, the 90s, were the mothership’s best stretch. To those engaged, they were nostalgic times.

It was the last decade before the internet intoxicated America, forever changing the way we consumed sports news. Television in the 90s, cable or over-the-air, was still an indispensable commodity.

By 1990, Sunday nights were filled with live play-by-play, MLB and the NFL. Jon Miller was hired to call baseball. He brought a strong and sweet voice that called play-by-play in a present tense, storytelling and traditional fashion.

During the decade, Brent Musburger rose from the mat, first on ABC and then on ESPN. He had taken an ignominious fall in 1990, when he was fired by CBS where he seemed indestructible.

The doomsayers of the 1980s took cover. ESPN didn’t only survive, it flourished. The 90s meant the launch of ESPN Radio, ESPN2, ESPN Classic and ESPN the Magazine. ESPN was on top of the heap. In 1990, The Wall Street Journal said the network was the #1 channel on cable. It had  54.8 million subscribers, better than CNN ‘s 53.8. By 1997, ESPN’s subscriber count swelled to 71 million homes.

Bristol became the citadel of sports media. When Disney bought Cap Cities/ABC, it called the shots at ESPN. The entertainment giant had deep pockets. A promising future was ahead. By 2011, the sports network’s number of subscribers peaked at over 100 million.

The world though would evolve. In 2018, just 7 years later, the subscriber count was at some 86 million, pared 14% by cord cutters; two ugly words in the cable world. It meant that ESPN had to broaden its platform creativity, through tentacles spawned by new technology. The accountants at Disney required a drop in employee headcount. Times were no longer glorious.

From an historical lens today, the 90s were the golden years and these are the on-air folks who helped build the juggernaut.

The dozen of newly arriving ESPN pioneers of the 1990s:

Steady as they come, unflappable, silky smooth and a wry wit. He and Keith were today’s version of scores, data and entertaining highlights with one easy click. Patrick left after some 17 years because he felt that the Big Show was too much about the ESPN brand and less about the talent, meaning him. Over time, he felt handcuffed. Partner Olbermann was less patient. He moved on and jumped around.

Goodness, what do you say about this guy? Talent? Endless. Maybe the best to cross the Bristol doors. Likely the best writer to work at ESPN and the best command of the language. In the studio, he and Patrick worked symbiotically, developing SportsCenter into appointment viewing. If earlier generations aspired to be Curt Gowdy or Vin Scully, budding broadcasters in the 90s wanted to be the next Olbermann or Patrick. Many of his viewers might not have shared his liberal political views but few will argue that he was special as an anchor.

3. Robin Roberts (1990-2005) A native of Alabama and a versatile woman broadcast pioneer, Robin first graced the ESPN screen exclusively before covering independent assignments for Disney’s ABC. By 2015, Robin worked completely for ABC, namely on Good Morning America. In 2013, Roberts received the prestigious Arthur Ashe Courage Award at the ESPY’s, presented to her by LeBron James.  Roberts overcame fights with both breast cancer and myelodysplastic syndrome which required a bone marrow transplant. In her ESPN years, she anchored seamlessly and interviewed smoothly.

Linda is the longest tenured woman anchor and has hosted thousands of SportsCenters. She can talk, comfortably and enthusiastically about any sport. Along with Mary Carillo, Suzy Kolber Robin Roberts and Lesley Visser, history should remember her as being among the top five pioneering women sports announcers. A Long Islander, her career began on radio and gained a degree of prominence at WCBS News 880 in New York. After working at the old Sports Channel and later in television in Seattle, she landed at ESPN where she’s been since. Cohn is now based in Los Angeles.

Getting baseball in 1990 was a huge win for ESPN and Miller was the perfect choice for ESPN to man the booth. He is among the best, a Ford Frick winner. Jon presided over Sunday Night Baseball for 21 seasons. It was Miller’s soft tone that was a bullhorn invitation to tune into baseball. He was soothing, relaxed, entertaining and informative. And he can also impersonate just about anyone.

The most versatile of the on-air staff, Levy can talk any sport knowledgeably. He’s at ease in the studio or in the play-by-play booth. One night he’ll do SportsCenter, the next, he’ll needle Barry Melrose. When ESPN had the NHL rights, he was #2 behind Gary Thorne and later found himself calling college football confidently. Success on the set is often about an anchor’s big smile. Ask James Brown or Warner Wolf. Sound and look happy. On television it’s contagious. Levy just covered his first NFL game, Denver-Oakland on the opening weekend.

Hired by ESPN’s Al Jaffe, Scott had a unique style and memorable sayings. “As cool as the other side of the pillow” and “Boo-yah” were two that he stamped. SportsCenter which he often hosted was policed by management. It followed a script. The restrictions frustrated both Patrick and Olbermann but it didn’t deter Scott who went about his business uniquely. He was liked by many but he annoyed others. In 2015, Scott died tragically at age 49 after fighting cancer. Way too young!

If Patrick and Olbermann were high maintenance, Suzy’s an employer’s dream, coming and going quietly. Kolber came to Bristol in 1993 to help launch ESPN2. In 1996, she moved to Fox but was back at ESPN three years later. Thought of first as a sideline reporter on NFL telecasts, Suzy has evoled into one of the best NFL hosts and reporters in television. A team player, ESPN management and viewers know they can count on her dedicated work. It’s why, she is still there and prominently so.

At ESPN, Brent who can do just about anything on-air, was primarily a play-by-play announcer, albeit he did host some NFL halftime programs. Brent did some NBA work, yet was used mostly on college sports for both hoops and football. Never shy to opine, his calls of college football’s national title games were always entertaining, including the unforgettable time he commented on the pulchritude of Katherine Webb, then the girlfriend of Alabama quarterback, A.J. McCarron. Brent called 7 championship games in all.

He was born in Brooklyn, grew up on Staten Island and now calls Hollywood home. Eisen is the face of the NFL Network and in-season, the Michigan grad does indeed get plenty of face time. But he gained his national visibility in the 90s when he joined ESPN.  Rich’s background was somewhat different from his Bristol colleagues. He first sharpened his skills as a journalist, including a stint at the Chicago Tribune. At ESPN, he and Stuart Scott worked closely together.

Associated first for his baseball reporting, Karl told me last year that unlike many of his colleagues, he doesn’t use an agent. Karl negotiates his own deals. Ravech anchored Baseball Tonight until it was phased out because MLB Network and the regional cable distributors sprouted. Early on, he anchored SportsCenter with Craig Kilborn who later successfully pursued an entertainment course. “SportsCenter can be pretty scripted,” he told me. “I was given flexibility to be more extemporaneous with Baseball Tonight.”

Hardly a twang for this Alabama native but indeed, the expected love for football. A University of Alabama alum, who made television stops in Georgia and Michigan, he joined ESPN in 1995. After a score of years in Bristol covering the gamut, ESPN management gave him a six year contract extension through 2021. As part of his deal, he was assigned to host college football’s Game Day each Saturday. Rece also did play-by-play of the network’s Thursday college football package.

ESPN’s first ten years: The dozen anchors and personalities who laid the groundwork for success

Continuing forces in the 90s from first  (see link)

Olbermann and Patrick solidified SC as

Small quibble but Robin Roberts is from Pass Christian Mississippi.

Thanks, Jeff. From everything I read, Robin was born in Tuskegee, Alabama and grew up in Pass Christian, Miss.

When Robin Roberts first joined ESPN she was an especially charming and welcoming personality for their Sunday morning show. I interviewed her then for a feature in College & Pro Football Newsweekly and asked her: what would you like to be doing in 20 years? Her response was startling. “I’d like to be the governor of Mississippi,” she said. And although she probably achieved much more with a nation audience hosting Good Morning America, it certainly is Mississippi’s loss.