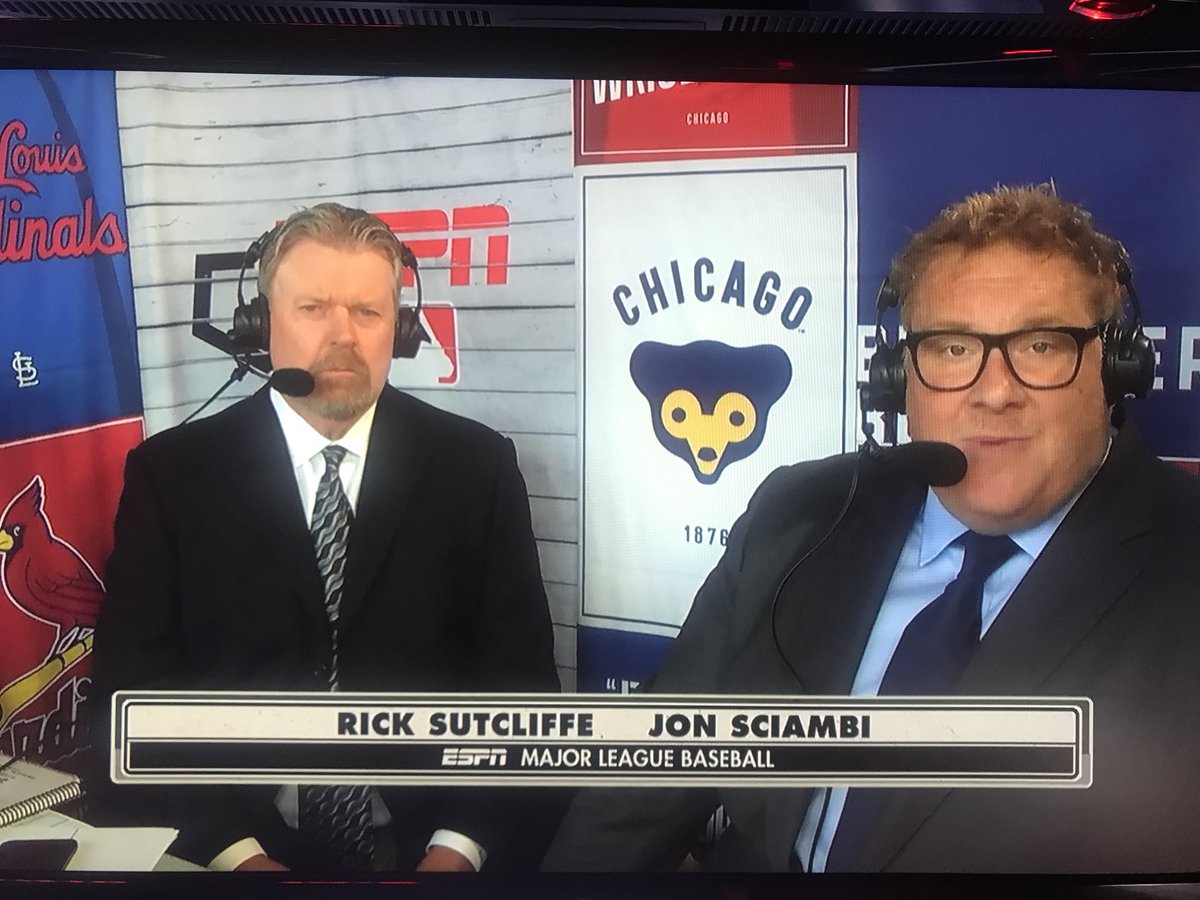 When ESPN’s Jon Sicambi embarked upon his career in the early 90s, local sports-talk radio was hot. So Boog, as he’s popularly known, went for it.

There were no short cuts. Entry level producers at sports radio stations often make minimum wage, a tough way to make ends meet. Broadcasting is not always glorious. Getting to the very top is improbable. And for many, even meager growth is a journey.

For Boog, it meant long hours and who knows what kind of appreciation. But he worked his tail off and learned the ropes.

In time, Sciambi emerged from the figurative bowels of a parsimonious Miami radio station. Some 25 years later, he’s a key play-by-play cog in ESPN’s baseball coverage.

Boog and Bob Wischusen were friends at Boston College. They both trace their careers through South Florida at WQAM. Like Sciambi, Wischusen grew into prominence. If Sciambi is so closely associated with baseball, Wischusen is identified with ESPN’s college football and basketball.  And if that’s not enough, Wischusen also works in the country’s biggest market where he calls New York Jets games on radio.

I had a chance to check in with Boog who’s an everyday kind of guy, disarming, unrushed, warm and friendly.

Growing up, who were the announcers you enjoyed?

I was born in Philadelphia so I would say that Harry Kalas was the voice of my childhood. In summer camp, I heard the mellifluous Ernie Harwell on the radio.

You were mesmerized by Vin Scully early. How?

It was the 1991 World Series between Minnesota and Atlanta. Scully worked radio with Johnny Bench. The Braves 5’6” Rafael Belliard gets on base. The Twins bruising 6’4” first-baseman, Kent Hrbek is holding him on. To paint a picture for his listeners, Scully says, “Belliard at first, looking like something that fell out of Hrbek’s pocket. A striking word picture for the mind’s eyes. For me, it was unforgettable.”

Will there ever be another Vin Scully?

No and I hope there isn’t. He wrote verbal poetry. His Koufax perfect game call in 1965 is the unmatched gold standard.  It was beautifully parsed, presented in perfect cadence and there wasn’t one grammatical error. And deep into his 80s, as he was winding down, Vin’s broadcasts were still magical.

Others who influenced you?

Yes, a couple for sure. Later, while in Miami, I loved listening to Dave O’Brien on Marlins broadcasts. He and Joe Angel were a great team.

Jon Miller is as close to Vin as anyone. He has a gift for language, is a superb writer and can turn a phrase. He helped me a lot.

How did Miller help you?

He gave me the best advice. Use the sounds of the park and emphasize that the play is about to begin. Leave space. Say the few words ‘Here’s the pitch,’ well ahead of time, so fans can hear the crack of the bat. By doing so, it’s also less likely that you’ll have to chase a play. Jon is special.

At what point, did you want to be a play-by-play baseball announcer?

Baseball was always my first love. So in Miami, I went to Marlins games, sat in an empty booth on press row and practiced play-by-play into my tape recorder. In 1996, I did the Boise Hawks, an Angels’ farm club in a short-season A league. One day, I had enough courage to ask Dave O’Brien to review my play-by-play. A few days after I gave him the tape, he stares at me for a second, holds up the tape and says ‘When you gave me this tape, I thought it would stink. It didn’t.’

Why are sports broadcasters attracted to baseball?

It’s the announcer’s ultimate sport because there’s so much space to fill and lots of time to tell stories.

But some baseball announcers today try to sound like play-by-play voices of years ago. It doesn’t work. It is not the way people talk today. It doesn’t sound genuine. Today, those who emulate old-time broadcasters sound stiff.

How do you go about it?

I try to narrow the gap between how I talk on-air and off. Other than occasional colorful language off-air, I try to sound on-air the same way I do off. It’s who I am.

What else do you try to do?

If you’re more casual and conversational, you’ll be more personal. And when I say something silly, I’ll be self-deprecating. Make fun of yourself on-air. We’re all human.

Does ESPN encourage its game announcers to be more conversational?

The answer is yes, to a degree. I say, let’s be more interesting. I consider my job to be the last line of defense; writer, editor and ombudsman.

I don’t try to turn the broadcast into a math class. Baseball is the most individual game of all sports. So isolating performances numerically can be quite telling. Analytics can be a great tool but I don’t overdo it or make it complicated.

Did you like the Mookie Boots spring training appearances, commenting from the field?

Yes. There’s no better way to humanize players. The truth is that baseball is an individual sport masqueraded as a team sport. Baseball’s longtime culture though is not to stand out. Don’t individualize yourself.

Right now, the game does not have sufficient flair and personality.

As you travel the country, are you stopped by fans?

When I am, it catches me off guard. I mean no one comes up and says, ‘You stink.’

Joe Buck does network baseball as you do. Thoughts?

Your standard week during the baseball season?

I’ll leave home (New York) on a Friday and work radio Saturday and Sunday night. I fly back Monday morning and then head back out Tuesday for a Wednesday game and come back home on Thursday. I do take some time off once in a while.

Sounds pretty dizzying. How about the off-season?

I’ll do a dozen or so college basketball games for ESPN.

Yes, the NBA. I’m an NBA guy. If there’s something I don’t do that I would love to do, it would be the NBA.

Do you miss talk radio?

I miss the connection with the audience but I have a pretty good platform to opine. No complaints.

Yes, I enjoyed doing day-to-day team baseball. I enjoyed my eight years with the Marlins and three with the Braves.

I wish that Boog had more time to show his stuff on TV, but I admire the fact that he does a good, clean job and sets up the analyst well. His tip from Jon Miller goes back to something Mr. Halberstam has written, about how, in doing baseball play-by-play, you need to set up the action, as in, “Here’s the pitch,” which too many announcers on radio don’t actually do. It also brings to mind a great bit of wisdom from the late and wonderful Dr. Enberg. He said when he started with the Angels, he asked Fred Haney–a… Read more »