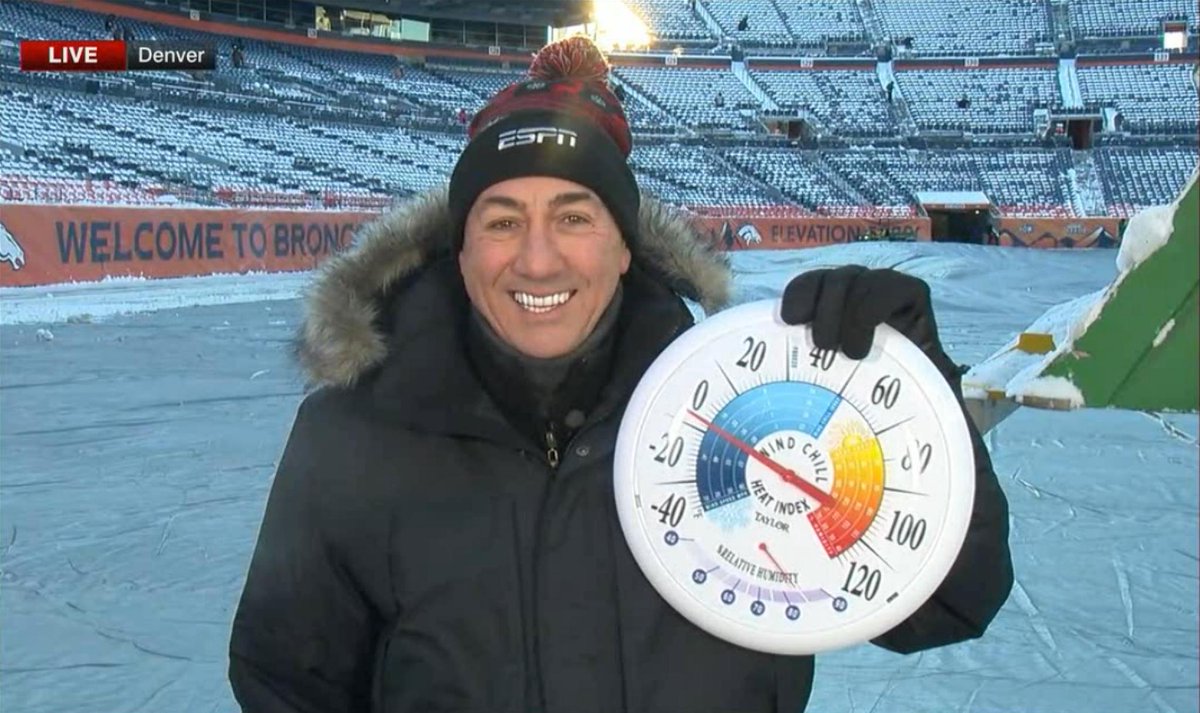 You’ve seen Sal Paolantonio on ESPN forever. Once foliage is in full blossom, Sal’s an NFL television staple; usually reporting  from his hometown of Philadelphia.

If you subscribe to an old-school work ethic, you’ll identify with this native New Yorker.

He hopped on a bus to SUNY, Oneonta in 1974, dropped his belongings in his dorm, undertook multiple jobs, hosted a jazz show on the school radio station, wrote for the college newspaper and even got the mayor, James Lettis, to visit campus for a live interview.

Paolantonio knew that Oneonta State wasn’t Columbia or Harvard, so as he put it, “I was a 7th round pick. I knew that to succeed, I had to work forty times harder than any Ivy Leaguer.” Motivated by the role of underdog, he pursued an accelerated program and graduated in three years.

As a student, Paolantonio kept a journal of the encouraging remarks that he heard from Oneonta’s higher-ups. “Dare to be bold and creative,” one professor told him. A school administrator advised him, “Ability is important but reliability is critical”; advice that Sal says served him well when he later worked on U.S. Navy ships in the Pacific and Indian Oceans.

Thirty plus years after graduating, Paolantonio addressed Oneonta students and reminisced warmly about his rich experiences on campus. He then paused before leaving the best for last. Smiling brightly, Sal gazed at the audience and said, “See, it was here that a redhead pulled up on campus in a 2-door Maverick. When I set my sights on her, I told a friend who was standing next to me, ‘She’s mine.’” Indeed! He and Lynn McGraw have been married for over thirty years.

In the same speech to students, he showed some dry humor when he flashed ahead to parenthood. “My daughters,” he said, “attended some of the best and most expensive schools on the Eastern seaboard. My three years at Oneonta in the 1970s cost all of $6,700. Today, that’s one back-to-school trip to Bed, Bath and Beyond.”

Sal’s covered the Eagles and/or the NFL for 25 years. Last winter, he penned an easy and insightful read, Philly Special, an in-depth look at the team’s Super Bowl championship. It’s turned into an Amazon best seller. 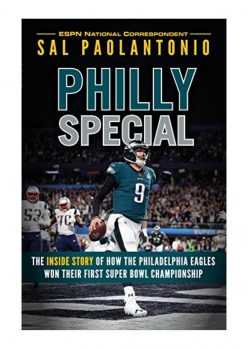 Paolantonio is no stranger to writing books. In 1993, he released a biography of the colorful and controversial, late Philly mayor, Frank Rizzo.

Sal says he wrote Philly Special as a gift to his family. He did so as a payback of sorts, for all the missed Saturday nights at home and Sunday nights around the dinner table with his family. He told Dan Patrick passionately that the book was for the guys who cut his hair and his lawn, the everyday fan. His goal was to show readers something that they did not know already about the Eagles’ title.

Sal earned a masters in journalism from NYU. He later worked for newspapers, covering diverse subjects from major sporting events to the Ray Lewis murder trial and famine in East Africa. He’s inspired by intriguing stories, not wins or loses. In Philly, where he’s heard frequently on local radio, he’s fondly called, SalPal.

We did a Q&A with SalPal who talked about Philly Special and his career.

At what point, did you decide to write a book about this Eagles team?

I started thinking about writing Philly Special during the team’s nine game winning streak in 2017. But then I shelved the idea after Carson Wentz was injured on Dec. 10th. I refused to even think about it until after Super Bowl LII. I never dreamed of writing a book about an Eagles championship season. They had been so close so many times and never finished the job. So, when they won, I was instantly propelled to the idea and called my publisher, Triumph Books.

Why did you pick Philly Special as the name of the book?

The title Philly Special was a natural. That iconic play, which will go down as the gutsiest call in Super Bowl history, epitomized the Eagles team and their championship run – the willingness to take chances, the willingness to trust the players to be tough, resilient and creative in the critical juncture of a game or the season. It was the first time in Super Bowl history that a tight end threw a touchdown pass, the first time a quarterback caught one. It was a special moment. And then the history of the play, which I devote an entire chapter to, tells the story of football in America – how the play was born on a dirt field in the rural south and came up through college to the pros. The team, the play, the history of both made the title perfect.

What kind of cooperation did you get from the Eagles for your book?

Throughout the season, head coach Doug Pederson gave me inside access to the team. I was the only reporter allowed in the team hotel during Super Bowl week in Minneapolis. Pederson texted pre-game each week to tell me what he was telling the team in closed door meetings. Whenever I needed interviews or information, the team helped me get them.

I think it’s self-explanatory. Philadelphia is a tough working class, union town and has always felt second-class in comparison to New York or Washington. So, it has developed an attitude, it’s the city that shoves you back.

After covering the Eagles for 25 years, experiencing the ups and downs of the franchise, you finally witnessed them win a Super Bowl.  You touched on a moment that you and Coach Doug Pederson shared after they won.  How did you keep your emotions out of it and conduct an interview with him at that moment?

In a reporting situation like that, you want your emotions to show. You want to show how much you care about their success. And I did care. I was happy for Doug Pederson and his family and his team. They did things the right way, they persevered, they beat the greatest dynasty in the history of pro football and won the city’s first Super Bowl title. If you didn’t feel that, you were not human. I’m not an Eagles fan. I grew up in New York. I’m not a fan of any team, in any sport. I’m rooting for the best story. I was dedicated – in a very personal way — to bringing every facet of that story to my viewers and listeners.

How did you evolve into a reporter for ESPN in 1995?

It literally happened overnight. I was a newspaper reporter for 12 years. And then I was on national TV. No training. A little on-camera experience. A little coaching, mostly on the fly. But, John Walsh, the Jedi journalist who came from the Washington Post and Rolling Stone and who hired me at ESPN, said to me, “You’re already a reporter. We can teach you TV.”

What was the biggest story you have done for ESPN?

Reporting on the double homicide trial in Atlanta involving Baltimore Ravens linebacker Ray Lewis. And then covering his two Super Bowl wins. Complex, multi-layered, difficult reporting on every level – in the courtroom, on the football field.

You’ve covered both sports and politics. Which do you enjoy more?

I loved reporting on both. I could not pick between the two. Writing about the rough and tumble city politics of Philadelphia gave me perfect training for walking into NFL locker rooms and trying to find out what’s going on. They are not dissimilar.

You have great journalism credentials, getting a masters from NYU. When in your life did you realize you wanted to be a reporter?

Freshman year at Oneonta State, I was pre-law. I started writing for the school newspaper, the State Times. I just loved it – loved the feeling of finding out what’s going on and telling people about it. Still love it. We live in a world now where everybody’s taking sides all the time – their side. I’m more interested in finding out what’s happening, why it’s happening, how it’s happening and what’s going to happen next. When I talk to journalism students (I once taught at St. Joseph’s University but now I lecture at journalism schools off and on), I always say to them: “Tell me something I don’t know.” It’s really that simple. If you have that approach, you can’t miss.

Compare the work and satisfaction of doing this book vs. the one you did on Mayor Frank Rizzo.

Writing Frank Rizzo’s biography, which is really a book about the history of urban politics in a major city and also a history of the Italian American experience, was all-consuming for three years. The book spans 120 years, from Italy to Philadelphia to Washington DC and back again. It was a true test of concentration and methodology, a great intellectual challenge. Twenty-five years later, that biography is still assigned to college students in Philadelphia, it still sells and two years ago was adapted for the stage by the great playwright Bruce Graham, appearing at the Suzanne Roberts Theater for a two-year run.

Philly Special is not nearly as complex – it was a much more finite story and I had a six-week deadline! Which I don’t recommend to anyone. The challenging part of writing Philly Special was – again – telling Eagles fans and football fans something that they did not know. So, each chapter is designed to tell the story of a game from the inside perspective, from my perspective, from a player’s perspective, using as much new material as possible. Football fans these days are hyper-aware of everything going on in the NFL.

That’s why I think the book resonated so well. There is a lot of new information in Philly Special. And people in America identified with that team. It truly became “America’s Team.” The story of the 2017 Eagles of overcoming all the injuries, of being underdogs, beating the odds in the post-season and then vanquishing the mighty Patriots was just special.