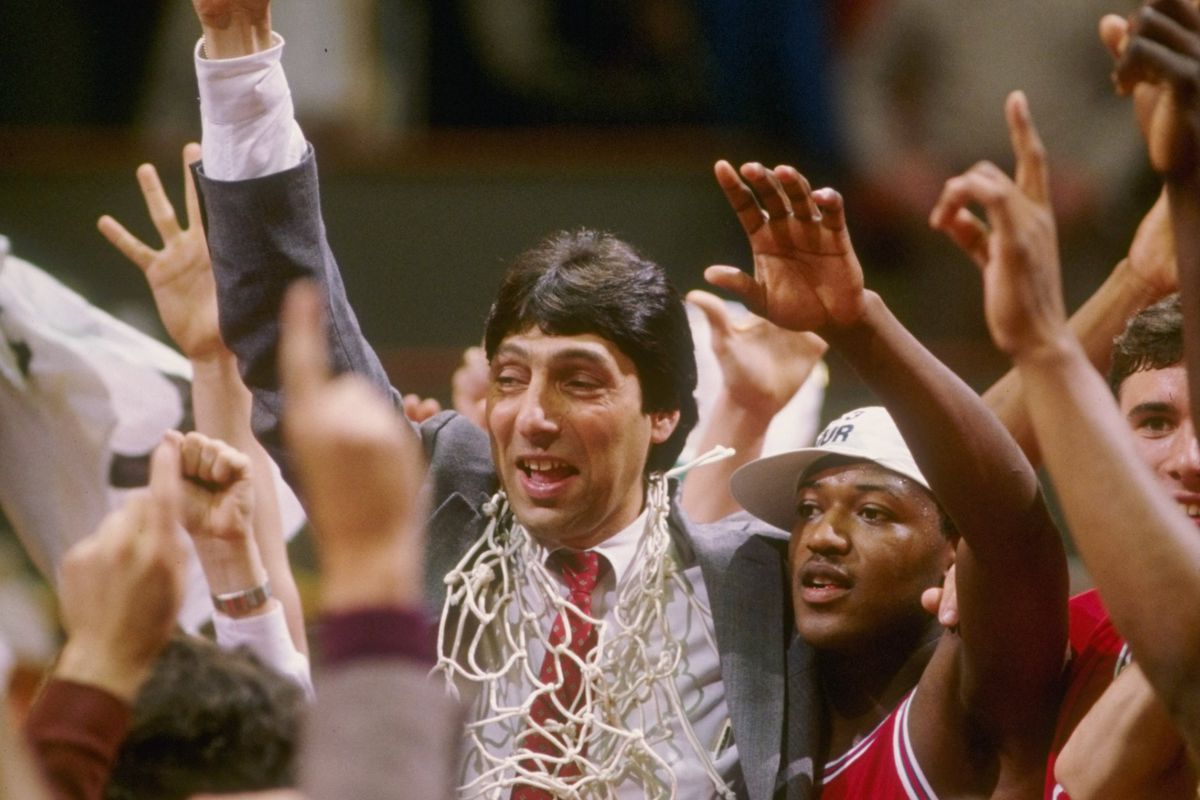 With the NCAA tournament over, college basketball fans now have to wait another seven months or so until the 2019-2020 season begins. I don’t want to think about how far off that is. Instead, I watched two stellar documentaries related only by the fact that they both use college hoops as a platform for profiling two colorful subjects.

Both documentaries, part of ESPN’s 30 for 30 series, 2013’s Survive and Advance and 2015’s I hate Christian Laettner are expertly presented. If I had to pick a favorite, it would have to be Survive and Advance because of the way Jim Valvano’s life is shared.

Christian Laettner seemed to be everyone’s antagonist. Andy Bagwell, co-author of Duke Sucks, didn’t mince words when interviewed for the documentary. “He was the face of evil for me. He always looked like he could have stepped off the set of The Karate Kid as a member of the Cobra Kai. The perfect villain.”

And Bagwell is certainly not the only one who felt similarly about the Buffalo raised Laettner. Fans, opposing players and even teammates elaborate on how Laettner evoked such visceral feelings of hate towards him, whether it be that he’s a bully, spoiled by an upbringing of privilege or a number of other undesirable characteristics.

Then there’s the festive celebration of the tenth anniversary of the 1983 North Carolina State national championship team, held at the Wolfpack’s Reynolds Coliseum, where raucous applause fills a packed arena at the mere presence of Jim Valvano. Later that same year, in 1993, Valvano would be unable to continue fighting his battle against cancer and died tragically at 47.

“It’s just hard to think that he’s not here,” Dereck Whittenburg, a former player of Valvano’s said in the documentary, released twenty years after the passing of his coach. Survive and Advance details the coach’s career at N.C. State and the relationships he had with the players who delivered an extremely unlikely national championship.

Despite their contrasting personalities what makes both stories wonderful to watch is the emotion that the subjects evoke from friends, family, and even those who only knew them by reputation. In Laettner’s case, it was hatred. Seemingly everything about the Duke star was reason to abhor him.

Aside from his immediate family and Duke fans, interviewees answering questions about his time at Duke often fall into two categories: “I can’t stand the sight of the guy” or “I respect him for what he accomplished.” Like him or not, it’s hard to deny his greatness. Laettner proved time and time again that he was stellar. He helped lead two Duke teams to back to back NCAA championships in 1991 and ’92.

Survive and Advance showcases an entirely different story, a man who many were unsure about at first, yet one who ended up winning over an entire state through charisma, passion, and determination.

“I don’t talk a lot about ‘V’ because I don’t feel like I have the words to really do him justice; I don’t, to this day, know how to exactly describe everything that he was,” Terry Gannon, a player on the ’83 N.C. State championship team, said in a conversation with his teammates, who all reunited for the documentary.

From a tight-knit family Valvano spent much of his early life in the New York area and coached at Iona before heading south. His New York accent might not have been redolent of North Carolina but he was warmly embraced in his adopted home. Coach V’s players described some of his coaching methods as unorthodox, including his declaration, on the first day of practice, that State would win a national championship. In one of his speeches interwoven in the film, Valvano describes a practice he holds once a year that consists entirely of cutting down the nets in preparation for an eventual national title.

It may have seemed strange to his team at first, but Thurl Bailey, another one of Valvano’s players, explains how, the more his coach described success, the more his teammates bought into his idea that they would be able to achieve greatness. Valvano envisioned success in a way that few others could.

When it comes to Christian Laettner, the documentary breaks down the intense feelings about him into “Five Points of Laettner Hate”: his privilege, being white, being a bully, his greatness as a player and his looks. Each segment delves into specific examples of what make people dislike him so much.

In Laettner’s senior year, 1992, with Duke matched up against Kentucky in the Elite Eight, college basketball fans saw a prime example of what made him a bully, only fueling further detest. On the defensive end of the floor, Laettner was pushed to the floor by somemone who he mistakenly thought was Kentucky’s Aminu Timberlake.

To be fair, Timberlake was standing over Laettner when he found himself down on the hardwood, but Timberlake was not the one to shove him. A short while later, Laettner had the opportunity for revenge and his temper got the best of him. While Duke was on offense, Timberlake fell to the floor right at Laettner’s feet so he decided to stomp on the Kentucky player’s chest. Laettner was slapped with a technical foul but wasn’t tossed.

He, of course, capped the night famously, receiving a three-quarters court pass from Grant Hill with one second to go and nonchalantly hit a jumper. It’s considered one of the biggest shots in NCAA tournament history, one that put Duke in the Final Four.

Of course, Jim Valvano could not be interviewed for this project, but the clips pulled from his various speeches showcase a man who truly cared for others around him, the relationship he had with his family and his love for his players. Nothing embodied him more than his “Don’t give up, don’t ever give up,” words used today as the motto for the Jimmy V Foundation for Cancer Research.

Even though the end of Survive and Advance touches on the idea that Valvano might have been responsible for violating NCAA rules, it’s hard to dislike Jimmy V because of the positive way in which he’s portrayed.

In the same way, even as I Hate Christian Laettner attempts to humanize the ex-Duke star by showing footage of him teaching kids at his basketball camp, it’s still understandable why lots of people were not too fond of him.