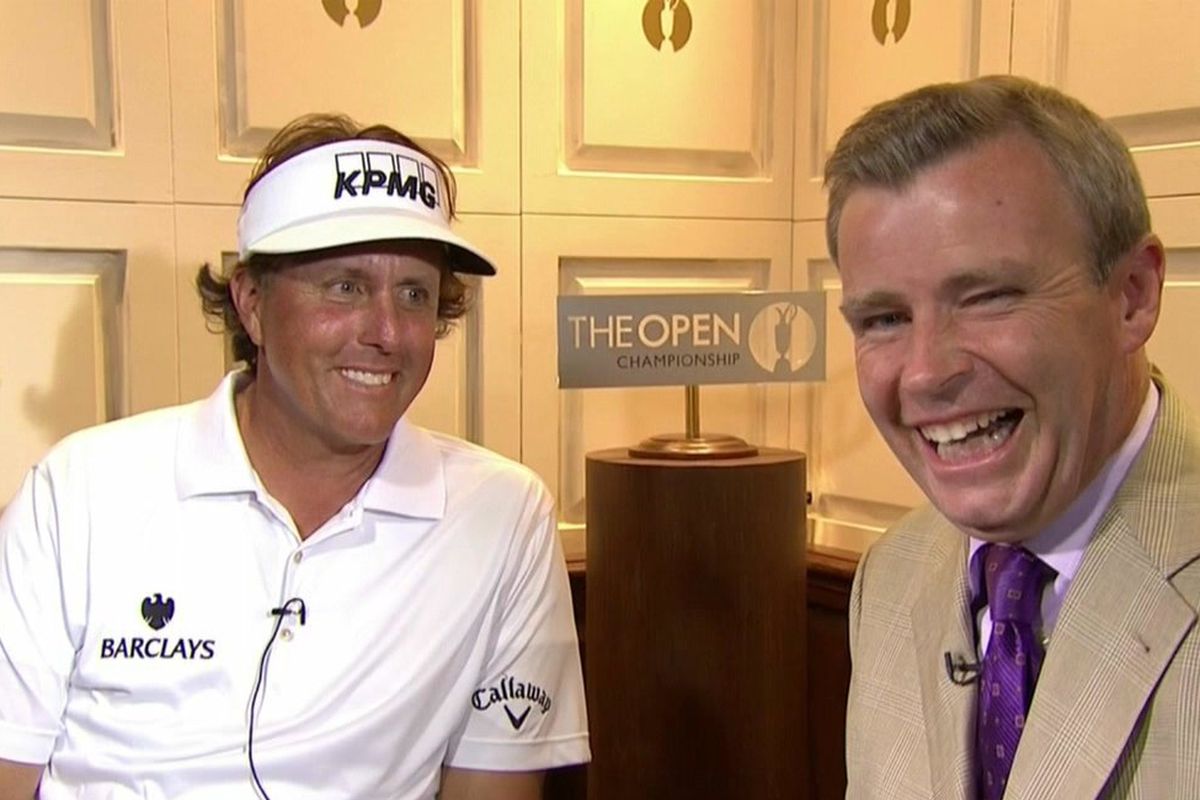 Tom Rinaldi and Phil Mickelson. ESPN's Rinaldi has engaged in long form interviews with many notables in his 17 year career with the sports network.

ESPN Producer Kristen Lappas reached out to Swedish adventure racer Mikael Lindnord to do an SC Featured on Arthur, Lindnord’s famous Ecuadorian street dog that attached himself to Lindnord’s team in the Adventure Racing World Championship in 2014.

At first, Lindnord didn’t want to do the interview.

“There was so much going on at that time, so I was like ugh, one more. There was a lot of turbulence in the team about all this media attention, so I was not really pumped for it, but she [Lappas] really fought for it.”

Lindnord agreed to the interview, so reporter Tom Rinaldi flew to Sweden to do what he does best: ask direct, smart questions in order to share compelling stories.

Immediately, Lindnord noticed that Rinaldi was different from all other interviewers.

“I think Tom is one of the guys that when he steps in the room, you know he’s the guy. He’s a superstar,” said Lindnord. “He’s very likable, very trustworthy. He spreads energy around him. If he were an athlete on a team, he would be the dream teammate. When he did that interview with me, I was crying instantly. When you talk to him, you can see it in his eyes that he really wants to know and hear your story.”

Rinaldi is accurate, empathetic, and curious, which makes him among the best interviewers in the business. He shared some interviewing tips for aspiring broadcasters.

Listening is extremely important in any interview. Don’t worry about the next question you’re planning to ask. If you focus too much on what you’re going to ask next, you’re not truly listening and you may miss something important that your subject says, like a trigger word.

“Whenever you hear what would be perceived to be a trigger word or the most interesting word or phrase in an answer, I think there’s great value, after someone stops talking, in saying, ‘you said (trigger word), why?’

See an example of Rinaldi doing this here

This is one of the most powerful things you can do in an interview. It’s simple, but it requires a great deal of discipline. After the interviewee is done talking, wait a couple seconds because that silence may prompt the subject to add a sound bite, which could be golden.

Rinaldi: “I would say probably one of the most effective thing I’ve learned in interviews that is difficult and a very hard thing to do, is to wait. Because our social impulse is when a silence gets to a certain point, we want to bail the other person out. But what people misunderstand about an interview is that they conflate it with a conversation. What happens before, what happens after, all of that is conversation. But during the interview, it’s not a conversation.”

Most athletes, coaches and celebrities don’t like to be interviewed. And that’s fine—I wouldn’t want to be put on the spot like that, either. Oftentimes, you will run into someone who is a reticent speaker, like San Antonio Spurs’ head coach Gregg Popovich. The good news? There are ways to get your subject to open up more. Here’s how.

“Another great and very simple question is, for someone who may be a reticent speaker, somebody who is nervous or not comfortable or not overly expressive, having quotes that others have said or that the subject has said about himself or herself is a great tool. ‘You said ___, what did you mean?’

Coming up with interview questions always involves research, but Rinaldi says there are three questions that you can always ask in any story worth telling.

“Don’t guess. Just ask it. The only preamble to it would be to fix a period of time.”

“For example, ‘You guys were winless. What was the turning point?’ That begs a story to be told. ‘Oh, you know what, there were so many.’ Follow up with, ‘What’s one that comes to mind?’”

“The greatest question in any interview ever is ‘what happened next?’ Many times, subjects get derailed or stop themselves or go off on a tangent. It just triggers the person to continue telling the story.”

ESPN’s Tom Rinaldi: A journey like few others; From teacher to TV interviewer on sports’ center stage