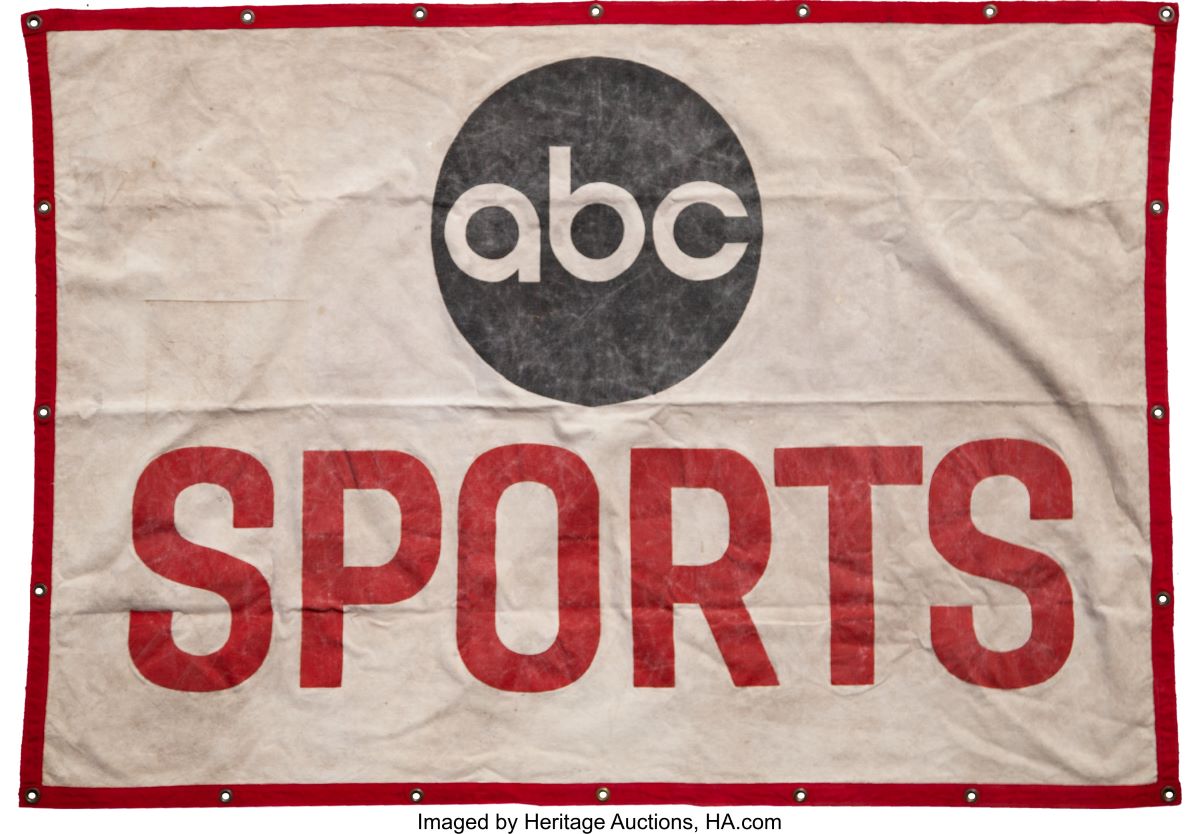 In the 1970s and early 80s during the height of ABC Sports, all decision-making roads led to the desk of honcho Roone Arledge. One man who wasn’t too far away was Roone’s chief lieutenant, Jim Spence.

In a nearly 26 year career at the network, the Dartmouth alum witnessed it all. He weighed in on many decisions but didn’t always get his way. Yet, for the most part, Spence had a seat at the table.

Whether he agreed with Roone or not, Jim was engaged in many of the conversations covering production, rights fees, talent and programming. Arledge, who passed in 2002, enjoyed much of the limelight during ABC Sports’ halcyon years and had a knack for dodging rare instances of failure. Today, Roone Arledge is considered the father of television sports.

In 1960, Spence began as a production assistant at ABC Sports and rose through the ranks under Arledge who was crowned as head of the sports division in 1968. Ten years later, shortly after Roone was given dual roles of president of ABC Sports and News, Spence was elevated to number #2.  “Jim Spence has been appointed senior vice president of ABC Sports, a position that puts him second in command in the sports division to Roone Arledge, president of ABC News and Sports,” the New York Times wrote on January 15th 1978. Spence was then considered the heir apparent to the throne but it never happened.

Go back a moment and consider what the over-the-air TV networks meant to Americans in the days prior to cable. TV consumers had nowhere to go but ABC, CBS and NBC. Some 85-90% of primetime viewers watched these three webs and nothing else. It wasn’t until the early to mid 80s that ESPN and cable in general began taking small bites of the audience from the legacy networks.

Spence was right there when ABC Sports ran the Olympics, which included the tragic events in Munich in 1972. He was there too for so many other noteworthy times, including when ABC and the NFL gave birth to Monday Night Football, and when the network covered the NBA, college football, the Daytona 500, the Kentucky Derby, Major League Baseball, Wide World of Sports, boxing and more.

In his years at ABC, Spence worked with on-air personalities of all sorts, those whose egos were contained and others whose heads were so big that no hat would fit them. Think of the ABC personalities in his day, Jim McKay, Howard Cosell, Al Michaels, Keith Jackson, Chris Schenkel, Don Meredith, Jim Palmer and Frank Gifford. They all had different sized heads.

The sports broadcast industry takes as many twists and turns as the Fenway outfield wall. In 1984, ABC had bought a majority ownership in ESPN. The Bristolites were just five years young then and needed a signature rights deal to put them in the big leagues. So ABC helped its new subsidiary acquire the rights to Sunday Night Football. But over the next decade, the power shift did a 180.

In 1996, Disney bought ABC/Cap Cities and with it ESPN. It then intermingled the two entities, assigning the management of ABC Sports to ESPN. Corporate bean-counters call it synergies. Others call it politics.

The once unconstrained, autonomous and distinct brand that was ABC Sports, faded like sunshine under the power of angry clouds. ABC Sports as we knew it was gone.

After he left ABC in 1986, Spence ran a sports broadcast consultancy and production house for some ten years before accepting a teaching position at William and Mary in Virginia.

I recently caught up with Jim and he was kind enough to do a Q&A on his ABC years and shared some of the emotional roller coaster that network sports management experiences.

You had a stellar career at ABC Sports, working under Roone Arledge as his top lieutenant for almost two decades. What precisely was your day-to-day role?

I was assistant to Roone who was Executive Producer of ABC’s Wide World of Sports, then was Coordinating Producer of that series during which time it won four Emmy Awards for outstanding achievement in sports programming. For seven years, I served as Vice President, Program Planning and finally, for eight years, as Senior Vice President with day-to-day responsibility for the supervision and coordination of all areas of ABC Sports.

How would you compare network play-by-play broadcasters today to the stable ABC had in the 1970s and 80s? Do you think the word homogenized describes today’s slew of announcers?

While the leading network sports announcers today are all very competent and accomplished, with limited exceptions, such as Charles Barkley, 2021 sports announcers don’t have the flair and personalities existent back in the 1970s, 1980s and 1990s — Howard Cosell, Keith Jackson, Don Meredith or John Madden.  Homogenized is a pretty accurate description.

In 1974, ABC was the first network to use sideline reporters. Jim Lampley and Don Tollefson pioneered the role on September 7, 1974. With some degree of consistency since, it’s been a TV staple. Keith Jackson called the game that particular day between UCLA at Tennessee. Lampley and Tollefson were both given considerable stand-up time prior to the game to deliver scene-setters and other nuggets that the two men picked up. What were your feelings then about the role and did you think it would stick?

Our sideline reporters provided a different dimension, offering information and insight not necessarily available from our play-by-play and expert announcers, such as injury updates.  I thought that sideline reporters stood a good chance of becoming permanent fixtures on sports event telecasts.

There are three sports voices who reportedly are paid $10 million more per year, Joe Buck Mike Tirico and Stephen A. Smith. That’s a ton of money. Are they worth it?

While Buck and Tirico are popular and very competent, I question the impact these announcers have vis-a-vis $10 million annual commitments.  In the case of Smith, while he is an interesting on-air personality, I don’t think a studio announcer is remotely worth a $10 million salary. One other point — Short of extremely extenuating circumstances, I don’t feel that networks need to make such commitments.

Interestingly, most of my students appeared to be more interested in the programming side of network television sports or in behind the camera production. While there were most likely students interested in announcing, I don’t recall a student specifying such interest.

Jim Nantz  Very accomplished with, importantly, a warm and friendly manner. I think viewers are very comfortable with Jim.

Joe Buck  Most competent but has a tendency to be condescending at times.

Is Mike Tirico, the heir apparent for Michaels at NBC, ready for prime-time?

I think Mike Tirico is a very smart and talented announcer. Yes, he is ready for primetime but my sense is that he is better suited as a host a la Bob Costas.

You had a chance to work with Howard Cosell. Having read your book, it sounds like there were times that he was tough to manage. What were the challenges like working with him.  He had enormous talent, great command of the language and was by the measure of many a pain in the neck. Your thoughts?

I found Cosell relatively easy to work with, although he always had opinions, some difficult to deal with.  He was always very well prepared and, with rare exception, willingly took direction. Case in point — the Tommie Smith/John Carlos black-gloved protest on the medals podium at the 1968 Olympic Games in Mexico City.  Cosell interviewed Smith right after his protest. I was the interview producer and suggested in Howard’s earpiece during the interview that he ask Smith if he was proud to be an American. I didn’t know how Howard would react to my suggested question but he asked it without hesitation

Howard, as I wrote in my book, went through what I term a “metamorphosis” in that he changed in his last years at ABC Sports from one, who was always acerbic but fun to be with, to one who lashed out at everything and everyone. But overall, his tenure at the network was most positive.

Interpreting the nuances of Up Close and Personal, it seems that you had a great deal of respect for Keith Jackson. Was he treated fairly by Roone Arledge? He was taken off Monday Night Football after its inaugural and successful season and later was briefly taken off the top role covering college football?

Keith (left) was not treated fairly by Roone Arledge when he was removed from the NFL Monday Night Football play-by-play role after a very successful initial season in 1970 but his resultant assignment as our lead college football announcer turned out to be fortuitous for Keith and ABC Sports, and created Keith’s legacy as one of the all-time great college football commentators.

His assignment as our lead college football announcer was affected briefly when Roone made a decision to have Al Michaels share the primary game telecasts. I did not share that view and believed we were going to lose Keith if we followed through on the commitment to Al. l met with Al in Las Vegas to request that he relinquish that commitment. Al was magnanimous and agreed to my request.

What was the best decision you made and one that you might regret?

The best decision I ever made was to commit to what, at the time, was a temporary role to work — for $65 a week — on NCAA Football and American Football League scoreboard programs on ABC during the 1960 football season. There was no commitment for employment thereafter. I accepted the offer and worked for ABC Sports for over 25 years.

In retrospect, although, per se, it was not a decision I regret, the television rights to the Daytona 500 stock car race going to CBS Sports after so many years on ABC is something that bothers me even today.

From an ABC Sports perspective, in terms of positives and negatives over the years, one of the most meaningful acquisitions I had the privilege of negotiating was the 1976 Winter Olympic Games from Innsbruck, Austria.  They were very successful for us and our Innsbruck prime time ratings propelled ABC to number one in prime the following year, marking the first time that occurred in ABC history. Another important and memorable milestone was our gaining the rights to The Kentucky Derby after 27 years on CBS.

On the negative side, we were never able to acquire the rights to the Masters Tournament after televising the other 3 majors — the U. S. Open, the British Open and the PGA Championship — for many years.

Great interview, and I read and learned a lot from Mr. Spence’s book. I found it interesting that Chris Schenkel didn’t come up here, because he clearly thought very highly of Schenkel, and his career at ABC went through death by a thousand cuts. I read once that Cosell said there are only two people in the sportscasting business of whom no one could ever say a harsh word, and one of them was Schenkel. The other was Jack Whitaker.