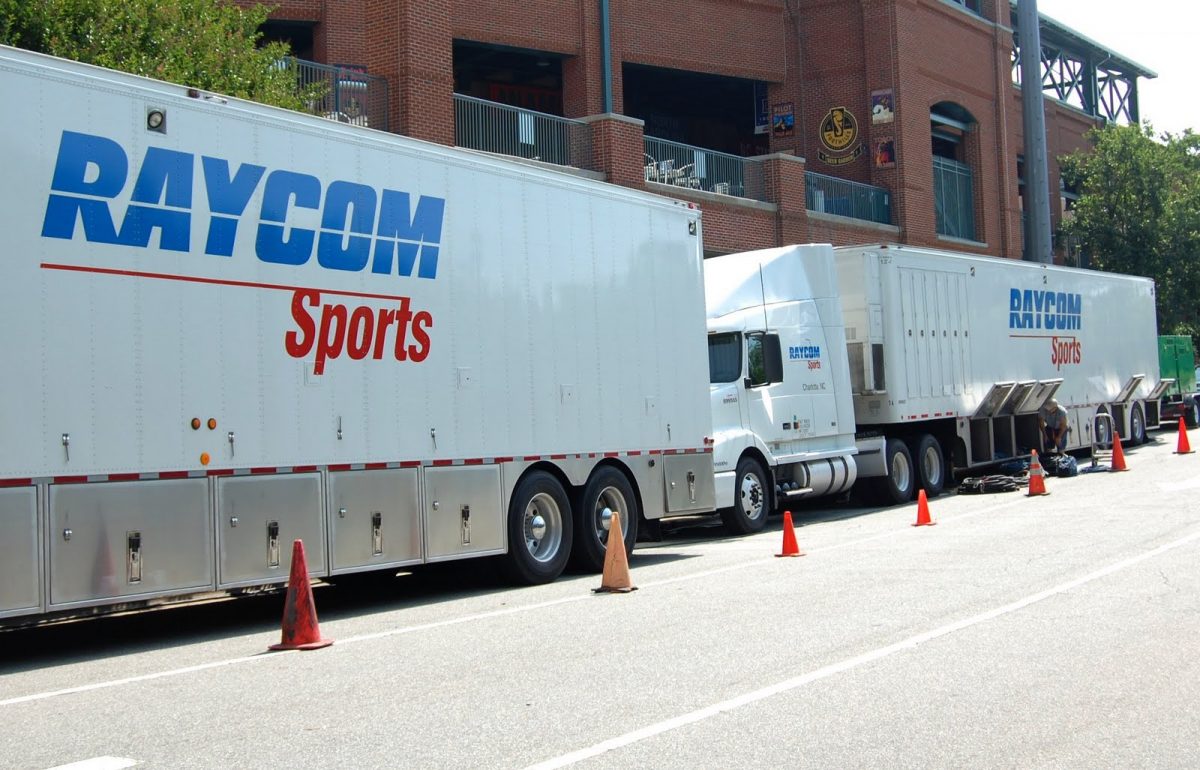 Raycom, a leading independent producer of sports programming, at work!

Regardless of the role crew members play in the truck, producing a sports telecast is a difficult challenge. For fans at home, the experience is completely different. The hypothetical I envisioned goes something like this:

You finally make it home to watch the game you’ve been looking forward to seeing for the past week. You invite a few friends over to watch it together and for the most part everyone enjoys the telecast for what it is and has a good time. One of your friends though consistently points out small oversights in the broadcast when they occur; an errant camera angle, an inane graphic or a missed replay opportunity.

The fan knows exactly what should be shown at any given time, or so he says. The reality is that a ton more goes into producing a telecast than the average viewer would ever imagine.

I’m a graduate student at Syracuse University and hope to pursue a career as a sportswriter. I was recently given the opportunity to sit in on the Raycom Sports production of a Syracuse-Boston College men’s basketball game. Experiencing a full day in the truck enabled me to appreciate the complexities from start to finish. It’s hardly a simple task. It requires a team of dedicated employees, who work diligently from tipoff through the final buzzer and from stage setup time until the dismantling of equipment.

But showtime produces the real test. No one involved has much margin for error. Decision making is instantaneous.

My day with Raycom starts early but not as early as those responsible for the truck itself.

The experience was an eye-opener. I was completely unaware of how many people it takes to produce a live telecast. It’s overwhelming and takes people with a tough stomach to cope with the unending pressure.

Nothing though is guaranteed. Always vigilant, Farmartino had to keep an eye on the screen showing the North Carolina – Miami game. The unranked Canes and the mighty Tar Heels extended into overtime, encroaching on the starting time of the Syracuse game. The affiliates showing both games would miss the beginning of the Carrier Dome game.

Though this seems somewhat inconsequential, advertisers drive the financials. Overlapping games threw the commercial schedule off balance. So Farmartino had to think quickly in order to accommodate every sponsor.

Announcers Tom Werme and Mike Gminski were also required to make quick changes on the move too and they did so seamlessly.

Producer Farmartino has the final say on major decisions. As the game progresses, he might be talking to the crew in the tape room to pull up a specific highlight to run as an outcue to a commercial break, to the bug operator to pull up a particular statistic or even the game announcers to discuss a potential storyline.

This need for constant communication means there is rarely a moment of peace in the truck. Each crew member must be able to focus on whatever task is at hand while also keeping their ears open for one, two, or maybe even three other people who might need something from them at any moment, requiring what Farmartino referred to as “three-dimensional hearing.”

The crew is a mixed bag of Raycom and school people so it’s an absolute necessity to communicate effectively. Trust is integral in producing a quality product. While I sat in the truck, I witnessed multiple people walking in, shaking hands, and introducing themselves for the first time. They would then have to collaborate flawlessly during the game broadcast. Relying on someone unfamiliar is yet another layer of intricacy that makes the job so much more difficult.

Scanning the crowd for the Bojangles’ fan of the game, planning a tight shot after a breakaway dunk, or shouting for a sponsor’s graphic to be pulled up, there is never a dull moment . Nevertheless, it is almost thankless work, because if the crew is doing its job well, then the viewers at home probably won’t notice. It is only when something goes wrong that a fan, like that hypothetical friend I mentioned actually realizes what takes places behind the scenes. But as Farmartino explained to me, live sports production is a lot like life, in that when something goes wrong, you just have to move on to the next thing and make the best of it.

At the end of the day, Syracuse came out on top of Boston College 67-56 and my day with Alex Farmartino and his crew was unforgettable.

It’s a labor intensive undertaking. Much of the Raycom crew – not the entire crew: