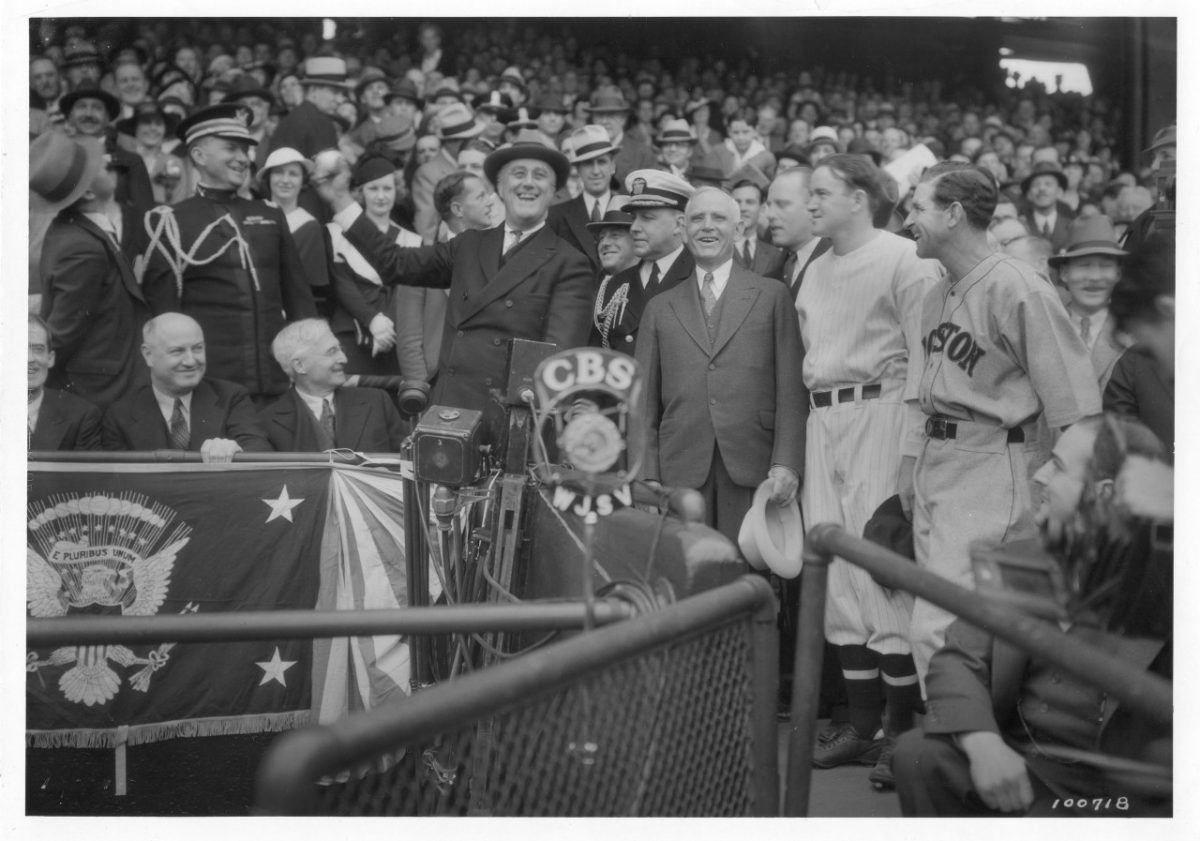 President Franklin Roosevelt throws out first pitch in Washington in 1934

Franklin Roosevelt was born in 1882, at Hyde Park, New York, along the Hudson River. Crippled by polio at 39, he became president at 51. Later, with the world at war, he secretly returned to his boyhood home to relive a time when all things had seemed possible.

Perhaps he recalled sliding down a snowy hill before polio—or learning to sail with his father, FDR later known as “America’s greatest seafaring President.” Only gradually had he picked up a wooden bat. Entering New England’s Groton School, Roosevelt became team manager, the “kind of fan who wants to get plenty of action for my money,” he said. “I get the biggest kick out of the biggest score—a game in which the hitters poke the ball into the far corners of the field.”

Roosevelt pledged a “New Deal” if elected president in 1932. Predecessors had described baseball in a nondescript way. On May 7, 1933, two months in office, FDR used its language on a network radio Fireside Chat to make baseball personal: “I have no expectation of making a hit every time I come to bat. What I seek is the highest possible batting average, not only for myself but for the team.” With 1 in 4 unemployed, he likened a batter sacrificing for the team’s good to a citizen sacrificing for the Nation’s good.

A president’s fuel, like a sports Voice’s, is audience trust. Roosevelt ran on America’s, knowing that vivid prose was more intimate: “My friends” … “you and I” … “we neighbors.” Listening, you knew why he told Orson Welles, “there are two great actors in the United States, and you’re the other one.” FDR was also a teacher, mixing fact and yarn, like another great then-Voice, Mutual Radio’s Red Barber, a model for dispersing truth.

The wireless became Roosevelt’s medium by which to wage World War II—the presidency and baseball more at one than they ever had been or would be again. On December 7, 1941, U.S. sailors readied for Sunday flag-raising at Pearl Harbor. Next day, requesting a declaration of war, FDR told Congress that Japan’s “unprovoked and dastardly attack” on our military installation had killed “a great many Americans” (2,403).  His first words still electrify: “Yesterday, December seventh, 1941, a date which will live in infamy.”

After Pearl, views ricocheted about whether baseball could or should exist in 1942—or again. Could the minor and major leagues play at night? Would players be thought “slackers,” the public boycotting? All awaited FDR. Nineteen forty GOP nominee Wendell Willkie wrote: “If the American way of life is to survive, let baseball survive.” Startling is the mom and apple pie niche that baseball filled in the nation’s sanctum, accepted sans doubt.

On January 14, 1942, Baseball Commissioner Judge Kenesaw Mountain Landis wrote FDR: “I venture to ask what you have in mind as to whether professional baseball should continue to operate.” Next day, Roosevelt read aloud what came to be called “The Green Light Letter.” He said: “I honestly feel that it would be best for the country to keep baseball going. There will be fewer people unemployed and everybody will work longer hours … They ought to have a chance for recreation … Baseball …  in my judgment is thoroughly worthwhile.”

The missive earned acclaim, Baseball Magazine comparing it to “the shot that was fired at Lexington in 1775.” Landis shared FDR’s view that players of eligible age qualified to serve should: 250 did. On the Home Front, towns formed organized teams, gas and rubber rationing keeping families close to home. Baseball held fundraisers for the USO and American Red Cross. Military personnel played “pick-up” sets. A much larger big-league night schedule met FDR’s request to let “the day shift … see a game.”

Freeze this time. FDR’s letter made the bond between baseball and America so official and personal that when other sports asked for similar support, Roosevelt ignored them or said no. Polio taught him to prioritize. The priority was the war. Baseball could raise morale—thus, help win it. Polio also taught him to value the outer world. Film blared Greer Garson and Jimmy Stewart, radio Kate Smith and Frank Sinatra, boxing and college football—baseball, above all. If ever an age screamed American exceptionalism, it was FDR’s.

Exhausted but inexhaustible, Roosevelt gave a June 6, 1944 D-Day prayer over network radio. In early 1945, he reported to Congress on the Yalta summit. FDR looked like death—but few let possibility consider his demise. On April 12, he suffered a cerebral hemorrhage at his vacation home in Georgia. Roosevelt died 25 days before Germany surrendered: an indescribable irony.

Many recalled his rhetoric, enlisting America to “win through” for our “Four Freedoms” in “their righteous might” toward “our rendezvous with destiny.” Almost everyone felt a memory: FDR’s first Inaugural, a tear at Pearl Harbor, a Fireside Chat: all the grace notes played by friendship or something more.

By late summer 1945, the world’s worst-ever conflagration ended. Even within baseball, what mattered was that the boys were coming home, not that some would again play ball. To Eleanor Roosevelt, the extraordinary age of her husband had ended with his death. “The story,” she said, “is over.” Actually, it still lives, three-quarters of a century later.

A fine piece, and a bit of trivia: The original draft, by one of his speechwriters, called it “a date which will live in world history.” FDR crossed out world history and wrote in “infamy.” He knew something about the language, all right.