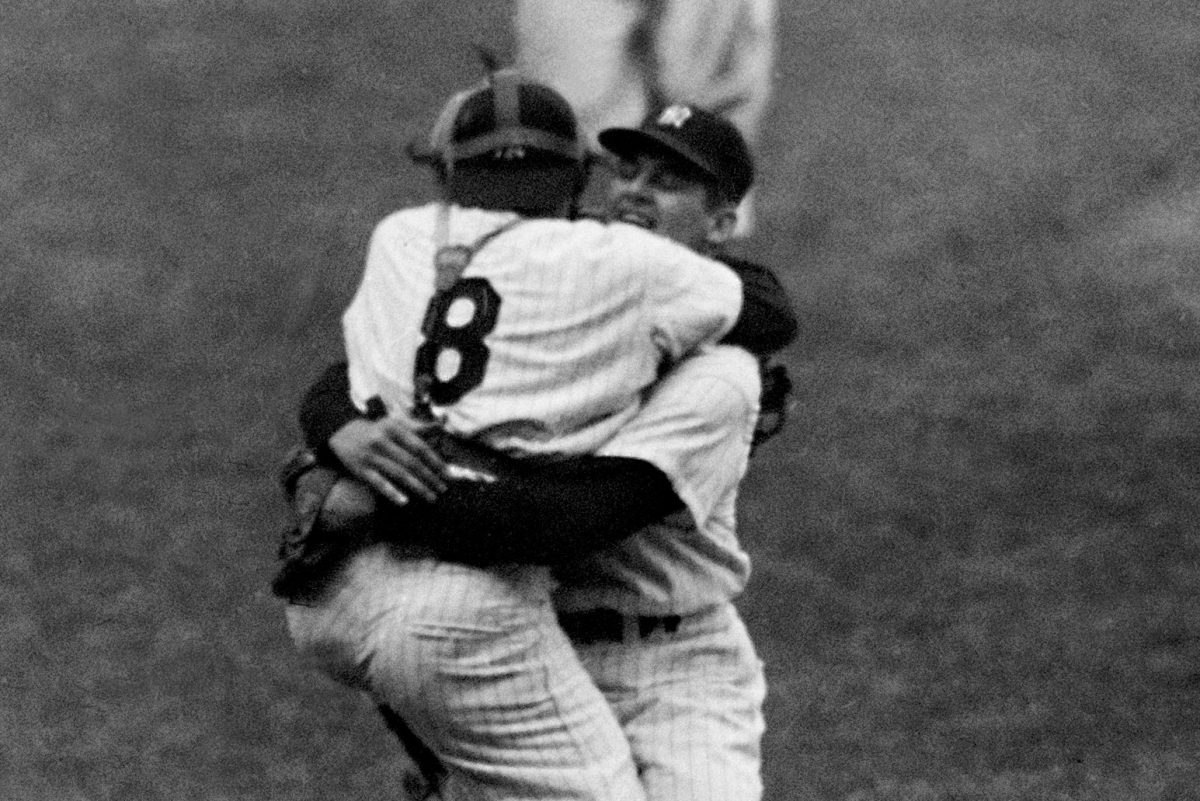 Yanks' catcher Yogi Berra leaps into the arms of Don Larsen after he threw a perfect game against the Dodgers in the 1956 World Series. Bob Wolff called the last pitch on national radio.

Bob Wolff spent eight decades in the business. If you’re smart, try hard, run into some luck and record your broadcasts, you’ll develop recognition. Wolff will be remembered for two historic broadcasts. Wolff was born 100 years ago today.

Not many voices can say that they graduated Duke, Phi Beta Kappa, Wolff did. During World War II he served in the Navy as a supply officer in the Pacific and was elevated to Lieutenant.

Bob caught on with the Washington Senators after the war where he worked in the booth with the legendary Arch McDonald from 1947-60. A Southerner, McDonald was unrushed in the booth. Wolff told me he would describe a pitch, walk to the back of the booth take a drink of water and saunter back to his seat. Wolff meanwhile, New York reared, was energetic and palpably engaged.

When the old Senators moved to Minneapolis in 1961, Bob moved with the team and remained there for just one season. His heart was in the East.

He applied for the Mets job in 1962, the franchise’s first season but didn’t get the gig. He did some work for NBC including the Baseball Game of the Week which at the time was blacked out in all the existing baseball markets.

Wolff then had a long run at Madison Square Garden as both an on-air personality and an MSG executive. He did some Rangers hockey but is better remembered for presiding over Knicks games on television including the club’s two seasons when they won NBA championships, 1969-70 and 1972-73. He did other broadcasts for MSG including the annual Westminster Kennel Club Dog Show.

Later in his career he remained on-air doing daily sports reports and commentary for Cablevision on Long Island. Bob’s wife, Jane, drove him to and from work every day, a long trek, from their home in Nyack, through New York traffic to the Cablevision studios in Farmingdale, Long Island. On the way to work, Bob would read the paper and get current with the day’s doings in sports.

Mrs. Wolff would also prepare Bob’s lunch which he would consume in the car ride. One day, his tie consumed some of his wife’s dressing and badly stained it. So after they got to Long Island and Bob was dropped off, she went out to get him a replacement tie. Weeks later Bob’s phone rang. He was told that his name was picked from a drawing of shoppers and that he won close to $700. So for Bob, the annoying tie mishap turned into a winner.

Wolff also taught at St. John’s University for some time.

Bob was assigned network radio coverage of the World Series in 1956, 1958 and 1961 on NBC. His baseball claim to fame was calling the final out of Don Larsen’s perfect game in the 1956 Series.

He also did the football Colts’ broadcasts locally in Baltimore in 1958 which of course culminated with the famous Alan Ameche plunge in the NFL’s first ever overtime game. Bob had a brassy voice and aa exuberant delivery.

Wolff was recognized with a Guinness World Records certificate, recognizing him for having the “Longest Career as a Sports Broadcaster,” 73 years.

Wolf was known to be generous with his time mentoring younger broadcasters or those who wanted a taste for what it was like to work in sports. After Wolff passed at age 96 in 2017, Rabbi James Rudin, himself in his mid 80s then, posted an earlier blog reminiscing about how he worked for Wolff in the summer of 1955 when Bob was doing the Senators. Rudin had been a recent grad of George Washington University and was scheduled to enter Hebrew Union’s rabbinical school that fall.

When Rudin met Clark Griffith, the Senators’ owner asked the young man whether he wanted to pursue a career in sports. Rudin told Griffith that he was planning a career in the rabbinate. Rudin remembers the reaction, “Griffith was at first silent, then shot me a quizzical look and finally said, ‘I guess they don’t keep batting averages for sermons. Good luck!’”

Yes, longevity was Wolff’s middle names. When he passed, he left Jane, a wife of 72 years. A proud family man, Wolff had three children, nine grandchildren, and five great-grandchildren. His son Rick Wolff has had a radio program on WFAN in New York for years, The  Sports Edge. It airs Sunday mornings at 8am. Rick is also an accomplished writer and book editor.

First four in the 2020 series of broadcasters reaching 100:

Third in a series; Announcers born 100 years ago: Bob Ufer, the indelible voice of Michigan football

4th in a series; Announcers born 100 years ago: The Amazin’ Bill Mazer, a New York TV and radio fixture

I loved that when he got the Frick Award, he performed “Take Me Out to the Ballgame.” I remember reading that he said the one thing that MSG could give him that MLB couldn’t was weekends at home, and that resonated, especially now that there are discussions of not having announcers travel with teams to save money. I thought of Red Barber, who didn’t go into the business when announcers traveled with the teams, and how he didn’t like the travel.

Bob also did the TV play-by-play when the Knicks came from way behind late against the Bob Cousy-coached (he played too) Cincinnati Royals to set what was then the NBA season record for consecutive wins. Regarding the Don Larsen perfect game it should be noted parenthetically that Bob followed the baseball announcer protocol by avoiding mentioning that Larsen had a no hitter (or perfect game), Instead, in the ninth inning he reported – “no one has left the ballpark…and if they did…well, they’re missing something great.” If you just happened to tune in your radio at that point, you would… Read more »