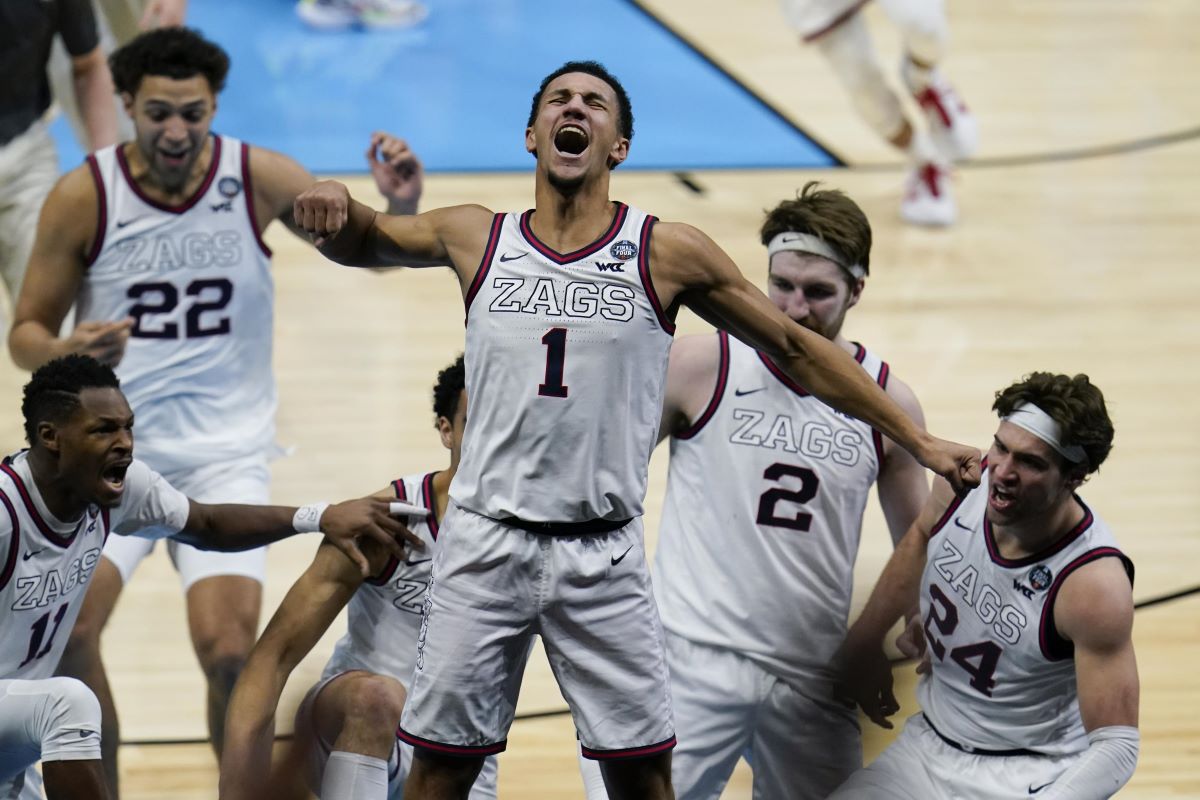 The Saturday night thriller was memorable. Fans will certainly argue over the most breathtaking Final Four win ever – forever. The Jalen Suggs shot is right up there.

As for the calls, there were five that I know of  – in English:

I give the nod to Josh Lewin, UCLA’s bright, glib and spot-on radio voice. He combines versatility, passion, depth and economy of language. Josh was most descriptive of the shot (32 feet he estimated immediately) , and echoed the disappointment felt by Bruins fans instantly. He didn’t pause after Suggs drained the improbable heartbreaker. The enthusiasm in Josh’s voice dropped immediately from hopeful to sorrow,  “Cry on your pillow,” he told UCLA fans. It was an expression of both sorrow and consolation. What more could he have said after a striking loss?

The second best call goes to the Gonzaga crew of Tom Hudson and Adam Morrison. It’s the appreciation of analyst and former Bulldogs star Adam Morrison. It’s uplifting to hear him empty his lungs, after he sat on the court, crying, in 2006. That’s when Gonzaga had just lost to the same UCLA in the Sweet 16, in the final minute, following a spirited rally from behind to take the lead. Fifteen years later, he couldn’t be more delighted.

Jim Nantz’ voice almost never cracks. It did as he called the winning shot. Understandably so! His captioning couldn’t have been better. Raftery though ruined the moment somewhat, sticking in his standard onions and kiss lines, just as viewers were absorbing the response on the screen. Let the screen tell the story. Raf could have waited. If Vin Scully were on the call, he wouldn’t have been too happy. This is TV. Let the viewer enjoy the celebration for a moment. Don’t get me wrong. Overall, it was a great call by Nantz. But haven’t these guys learned to the let the celebration breathe, even if the crowd size was limited due to the pandemic.

Sean McDonough was completely professional for ESPN’s international audience, but didn’t identify the name of the shooter immediately. Bilas, let a few seconds elapse, before he put a recap on the play. When Sean’s voice cracked though, we knew that presiding over the memorable finish had to be a highlight of his rich broadcast career. Then there’s Bilas. Zero emotion, as expected. If Jay’s pants were burning, he wouldn’t yell fire. Goodness!

Dick Vitale was the analyst in the first game, The Baylor blowout of Houston. He would have lost his mind, had he been on the Suggs call. Dickie V works tonight’s title game with McDonough.

WHAT A WINNER! GONZAGA TO THE NATIONAL CHAMPIONSHIP! WOW WOW WOW! 🤯 pic.twitter.com/LJ8C88fDgQ

Talk of no emotion, Mr. Robotic, Kevin Kugler was descriptive on national radio, but the itinerant reporter has ice in his veins. His lines too are so scripted. He gave the end-game thriller the same vocal treatment as he would an acrobatic dunk of little consequence in the early minutes of the game. How about a little emotion, bud? Be yourself, or maybe no emotion is who you are?

I happened to hear Kevin Kugler’s radio call. My gripe was neither he nor PJ recapped the play. All I heard was “Suggs with a long shot for the win” and it banked in so I knew Gonzaga won. But how? Since it happened so fast, no issue with not doing a full description of the frantic 3 seconds, but I listened for a few minutes afterwards and I don’t recall hearing how Suggs brought the ball unimpeded into the front court and launched a 30+ footer from the right side or just inside half-court. Suggs actually had a relatively… Read more »

As an excellent announcer yourself in your days doing college ball in NY, you would know. Your point about not boxing out was critical but it was old news after Suggs’ shot and the celebration began. Kip, when I hear these memorable calls, I think of two guys whose opinions I would cherish, Marty Glickman and Joe Tait. Unfortunately, they’re both gone. I think what both would say is that they were both on the headline news and that was fundamental.

Yes, some calls were better than others but all had flaws. I don’t know if they were “cleaned-up” later. Maybe Josh Lewin was the best, but after calling a “32 footer for the win” (good call) he said the shot was “just beyond mid-court” when it was just inside mid-court from the shooter’s perspective. So now as a listener I wouldn’t know where the shot was taken. The Gonzaga announcer called the shot “pull up 3 for the win.” Well, that was not a normal pull up 3 point jump shot.