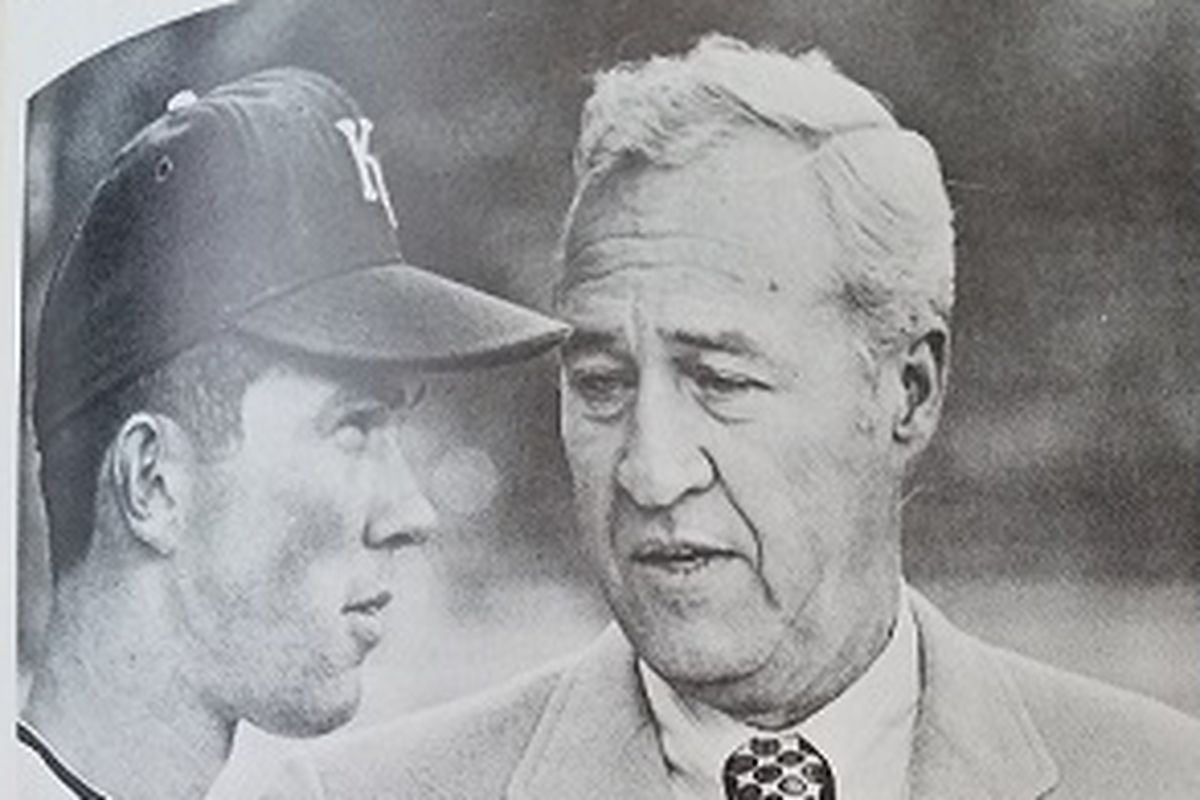 Buddy Blattner was the original Voice of the Kansas City Royals when the franchise was born in 1969. He hired Denny Matthews as his sidekick. Matthews is still with the Royals. It's his 52nd year with the club and the longest tenured American League voice ever.

Buddy Blattner was a gifted athlete and a renowned international table tennis champ.

During the war years, when many of baseball’s greats were in the military, Blattner made it up to the Big Leagues as a second baseman. He began with the Cardinals in 1942, then headed into the service himself before catching on with the New York Giants for three seasons beginning in 1946. Buddy completed his Major League career in 1949 with the Phillies. While in the service, Blattner got his first taste of being on-air, reporting sports news and conducting interviews over the Marines’ radio station on Guam.

With his playing days behind him, Blattner began broadcasting in the city where he was born, St. Louis. Local television was an embryo then and Buddy developed a baseball quiz show. In 1950, he was hired to call the games of the St. Louis Browns (now the Baltimore Orioles). But the Browns couldn’t get a sponsor until the middle of the season when Falstaff Beer stepped up and the games were finally on-air.

Blattner was behind the microphone in 1951 when the infamous Eddie Gaedel was signed by Browns’ owner Bill Veck. Yes, Veck as in wreck. Gaedel was only 3’8” and Veck used him as a stunt to get the Browns’ lead-off hitter on base.

In 1952, Blattner was teamed with Dizzy Dean on the Browns broadcasts. The Hall of Fame pitcher was best known for butchering the language. He was the king of the Malaprop. ‘Confidently’ became ‘confidentially.’ And players didn’t slide into the plate they ‘slud’ in. Somehow, it didn’t seem to matter.

Because Falstaff also sponsored baseball broadcasts nationally, the two men also worked network packages on both television and on radio for Mutual and Liberty. In 1953 and ’54, they were seen on ABC Television, then a fledgling network, well behind CBS and NBC in the ratings. In 1955, the baseball package and the two men migrated to CBS.

Dizzy was beloved, particularly in small town America where the Game of the Week was carried and heavily viewed. Mel Allen called Dean “too rural.”

The Los Angeles Times said, “Blattner was the straight man and translator for Dean’s extremely colorful commentary.”  Buddy said “He (Dean) enjoyed being a character, and he was smart enough never to get out of character.” It played well because the national broadcasts then were blacked out in the country’s big markets where baseball’s teams were situated. So in smaller markets, Dean’s uniquely colorful language and entertaining tales were novel. The broadcasts became appointment viewing.

Dean (r) and Blattner (l) worked the Game of the Week together for seven years. But in 1959, the relationship between Dean and Blattner soured. So Buddy quit and worked the St. Louis Cardinals broadcasts in 1960 and ’61. In 1962, he joined the Los Angeles, soon to be California Angels and called their games through 1968. He was eventually replaced in Anaheim by Dick Enberg.

In 1969, when the Kansas City Royals were born, Blattner headed back to the Midwest, becoming the team’s original voice. Blattner was fired by the Royals in October, 1975.

He told esteemed historian Curt Smith that he could have then had Bob Prince’s Pirates gig in Pittsburgh where the Gunner had just been fired but he didn’t want to leave the Midwest. His children and grandchildren were there and they took priority.

It was Blattner who hired Denny Matthews as his sidekick the very first year of the Royals. Denny is still there, his 52nd season with Kansas City. In all, Blattner was a baseball voice for a quarter century.

Reminiscing about Blattner, Matthews said, “He was a mentor and superb baseball announcer. We worked together for seven years. He also did the old St. Louis (now in Atlanta) Hawks of the NBA. As good as he was at baseball, he may have been an even better basketball announcer.”

Warren Corbett, writing a profile for SABR (Society for American baseball Research), said this about Blattner: “He had a vibrant voice and developed an engaging, enthusiastic style. He talked to players, managers, and coaches, and inhaled the sports pages to gather information.”

According to Corbett, “Browns owner Bill Veeck, always looking for a crowd-pleasing stunt, hatched a scheme in 1951 to put Blattner on the roster, send him onto the field with a walkie-talkie strapped to his back, and have him broadcast a game while playing. The experiment died when the Phillies, who still owned Blattner’s (playing) contract even though he was retired, demanded $10,000. Veeck couldn’t afford it.”

In St. Louis, Buddy might best be known for his years broadcasting those Hawks’ games. One of the oldest NBA audio recordings still available today is posted on YouTube. It covers the final game of the 1958 NBA championship series when the Hawks knocked off Bill Russell and the Celtics for the league title.

Hawks’ center Ed Macauley said this of Blattner: “His delivery was great. His voice was always friendly. He was never screaming. Everyone liked him. He never took cheap shots at anybody.”

After he gave up broadcasting at age 55 in Kansas City, Blattner said “I hoped I never stayed with this thing too long and became a cranky old man.”

Blattner then went into real estate development. According to Corbett, Blattner helped create the Four Seasons Racquet and Country Club, a resort at Lake of the Woods in central Missouri, and served as its managing director.

When he left broadcasting in 1975, Buddy told Smith, “I don’t have a dime, but I lived like a millionaire.”

Later, Smith said it best in his acclaimed, Voices of the Game, “At 65, overseeing an $80 million project, he had a dime but has changed little since Kansas City or, for that matter, his electric entwining with Game of the Week.

(The other four broadcasters born in 1920 are Bill Mazer, Bob Ufer, Sid Hartman and Bob Wolff. Hartman is still alive at 100. We’ll highlight the other four in future issues.)

I never got to hear Bud Blattner do a game. I wish I had. I think he deserves the Frick as a pioneer for network TV and as one of the first ex-players to turn broadcaster. It’s interesting that he never told the story of his split with Dean while Dizzy was alive, and then told Curt Smith for the book he did on Dean. And just a couple of weeks before Dean died, he guested on a Royals broadcast with Blattner. How did Red Smith put it about Elston Howard? He didn’t have to look up what class meant,… Read more »